This should as little surprise to anybody with a pulse, but Cyberpunk 2077’s Official E3 2019 Cinematic Trailer was the most viewed trailer from the entirety of E3 this year.

The hype is absolutely going through the roof for Cyberpunk 2077, with over 21 million eager fans tuning in to watch the new trailer at some point last week. That's according to data from Mike Armbrust, who consolidated all sorts of terms of YouTube buzz generated.

What is perhaps surprising though is just how close Cyberpunk 2077 came to slipping into second place. Marvel’s Avengers A-Day Official trailer managed to rack up 19.6 million views in 24 fewer hours. Disney’s Marvel franchise is enjoyed practically unparalleled levels of success and attention these days, and even the prospect of a thoroughly boring trailer wasn’t enough to deter the legions of Marvel fans.

Cyberpunk 2077 and Marvel’s Avengers were definitely the winners of E3 2019 though, with a steep drop-off into third place and the Star Wars Jedi: Fallen Order gameplay showcase. This still managed to notch up 9 million views but it was dwarfed by the big two. 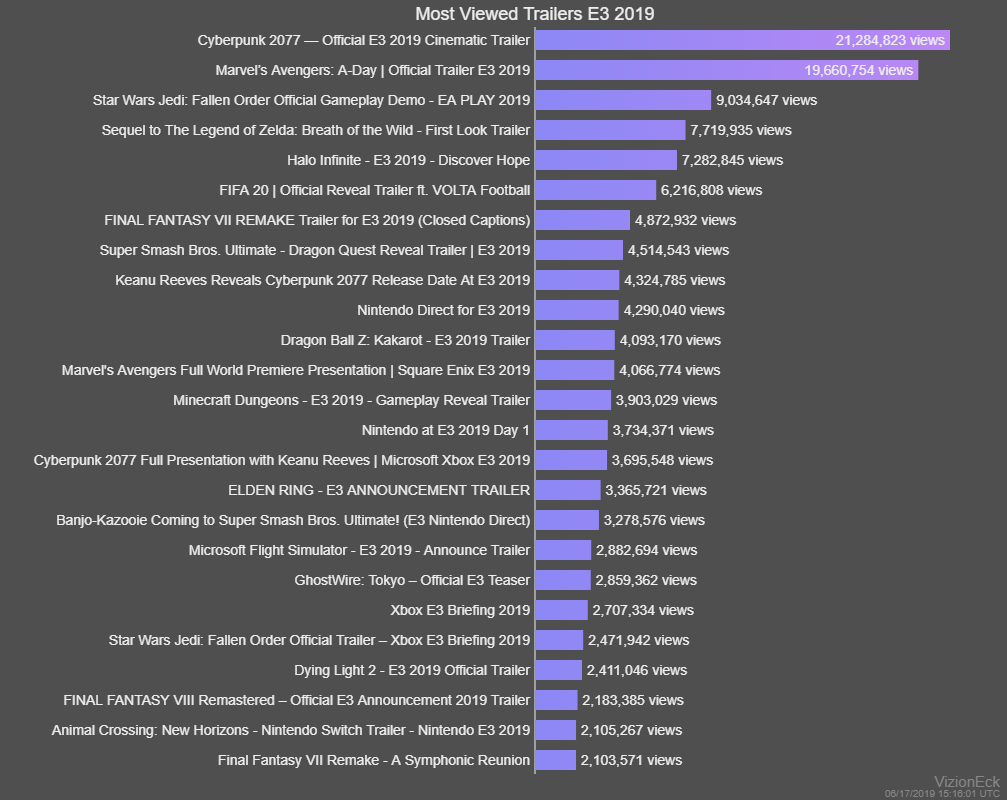 Microsoft will be pleased to note the Halo franchise still has the capacity to generate buzz. The sci-fi shooter series has fallen by the wayside a little lately, but the Halo Infinite cinematic trailer managed to become the 4th most watched trailer during E3 week, followed closely by The Legend of Zelda: Breath of the Wild sequel first look.

While not an exact science, these viewing figures do at least serve as a useful barometer of just how much interest and hype there is in any given game. Tying into our Up For Debate over the weekend (which pitted cinematic vs gameplay trailers), it turns out cinematics are the big winners in terms of viewing figures. The (seemingly) much-loved Watch Dogs Legion gameplay reveal doesn't even manage to make it into the top 25.

A quick shout out to Microsoft Flight Simulator though. One of Microsoft’s biggest surprise announcements, even being on this list at all is an impressive feat and suggest the new MS Flight Simulator could become quite the hit. Flight Sim used to be a huge franchise for Microsoft but fell by the wayside. The reveal trailer has ended up being more popular than Watch Dogs Legion and the Borderlands 3 Official E3 Trailer. Kudos.

And a moment of silence, please, for the most hated games of E3. This data uses the ratio of views to dislikes to generate a list of the least liked game trailers at E3 2019. Suffice to say, Nintendo fans ain't happy about what they've seen of Pokemon Sword & Shield. I'm sure they'll get over it. 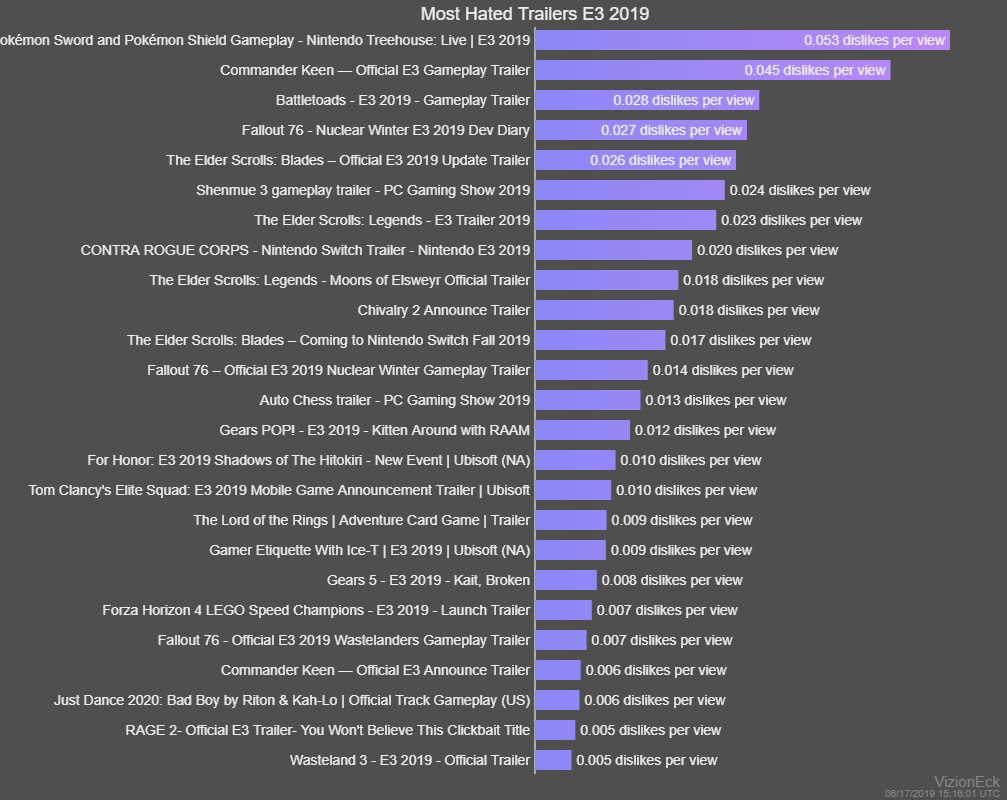 Overall, Bethesda has a pretty bad time of it here, with the majority of trailers it showed popping up in the Most Hated Trailers list. Thankfully, Doom Eternal was always there to save the day.

Wow, how did they manage to screw up Pokemon? Like seriously, that couldn't be easy... I got to check that one. Rest is not really that surprising.

not all pokemon will be in the game, not even transferable. instead of all 1000 pokemon there will probably be around 600 orso, the others are locked out of it.

Yeah, that is shame. Also people were complaining a lot about battle gimmick, which also is kind of meh. And how game is basically 3DS game with better graphic, which yeah, was bit disappointing. Better hardware on Switch could be used to expand on everything. Shame they didn't listen to community more and implement some of long requested features.

Honestly, most ppl are fine with the graphics, i love them personally. its just that not having every pokemon is a big no no for most people, including me.

Now that's a game that truly live up to ''LEGEND' in his name...damn a remake of that...

Damn straight!!! I figure if i spam it enough maybe one Will be made join the movement!!!!!

How odd that DOOM isn't on either list. Surely the game looks epic!

unless Gamefreak changes Pokemon sword & Shield, i doubt people will get over it.

I mean, if its a time constraint thing they could always just update the game with the new pokemon as they transfer them over

Whats so bad with it ?? Im not a pokemon game player ,just wanna know

You can't catch 'em all!

Gamefreak decided that not all pokemon will be available in the game, not even through transfers.

I wonder how avenger is going to be, do you level up or gear up or anything? Will it be more single-player based or multiplayer based. I also hope if ff7 remake comes on pc they add mod support

Kind of bewildered that a FIFA trailer got over six million views. I know it's popular but what were people expecting?

It's got street football back. I found it quite exciting tbh, although it's only really one of those games you notice if you're 'in it'

it saddens me to see that Destroy all Humans isn't in the most liked list. it had one of the best trailers

Is it just me or does the avengers game seem, ****ty

To me it looks like a game that should have come out when the first Avengers movie arrived. It also doesn't help that the characters looks are now so associated with the MCU's actors likenesses.

It feels really strange. They wanted a different disjointed universe but they decided to have the character designs resemble a lot to the movies which makes the game just look like a knock off. I don't know if there was a gameplay reveal of that game but the trailer itself really didn't make me interested in the game at all.