It's time to locust-hunting, chums. Gears 5 is now out on PC, available through both the Windows Store and, amazingly, Steam! The PC version of Gears 5 is the place to be if you want the best performance around, paired with proper keyboard and mouse support.

Handily,  Gears 5 also comes with the official benchmarking tool. Having messed around with this extensively, and gotten my derrière kicked in the online, I can confirm the benchmark is pretty much analogous to in-game performance, give or take. With all that mind, we've been busy testing Gears of War 5's PC performance.

Gears 5 has an immense range of graphics options as we've already covered here. Just about every graphics setting under the sun is included (aside from any juicy ray tracing) such as unlocked frame rates, shadow, detail, texture, environment, and post-process settings, right on down to the ability to fine-tune motion blur intensity or the spawn rate of particles.

Gears 5 comes with a frankly immense benchmarking tool. This tracks average frame rates, frame times, average minimum frame rates (percentiles), CPU render time, VRAM usage, memory usage, texture pool usage, and even provides a nice breakdown of whether you're CPU or GPU-bound. It's awesome and basically gives you all you need to suss out where the performance snags are coming from.

Here's a little peek at what the results readouts look like: 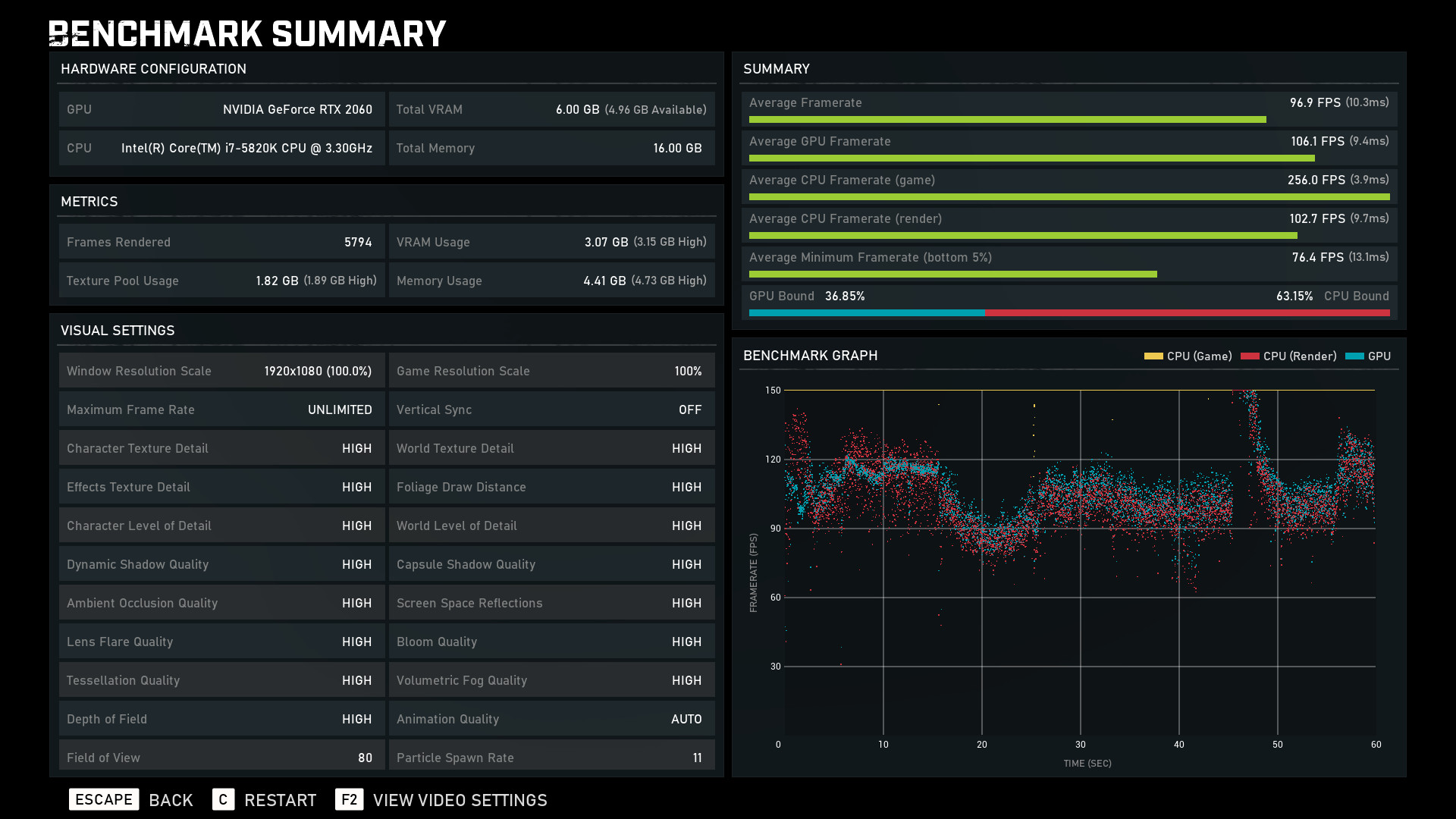 Having already benchmarked Gears 5 when the closed beta test ran some two months ago (you can those results further down below), we basically just needed to find out whether the PC performance would change in the run-up to launch. The bottom line is: No, Gears 5 runs pretty much the same now as it did eight weeks ago. That’s no bad thing though. Gears of War 5’s beta test PC gaming performance was very slick and the final product sticks to this course.

In order to highlight the changes, or lack of, since the beta test, we ran through a series of benchmark tests on the same hardware as we did last time. We repeated the test under the same circumstances using a PNY XLR8 GeForce RTX 2060 6GB, an Intel Core i7-5820K CPU @ 4.2 GHz and 16GB DDR4 RAM.

For our Gears 5 benchmarks, we used this official in-game benchmarking tool. We ran the test at three different resolutions (1080p, 1440p, 4K) and across all four graphics presets. We have then provided both the average frame rate. 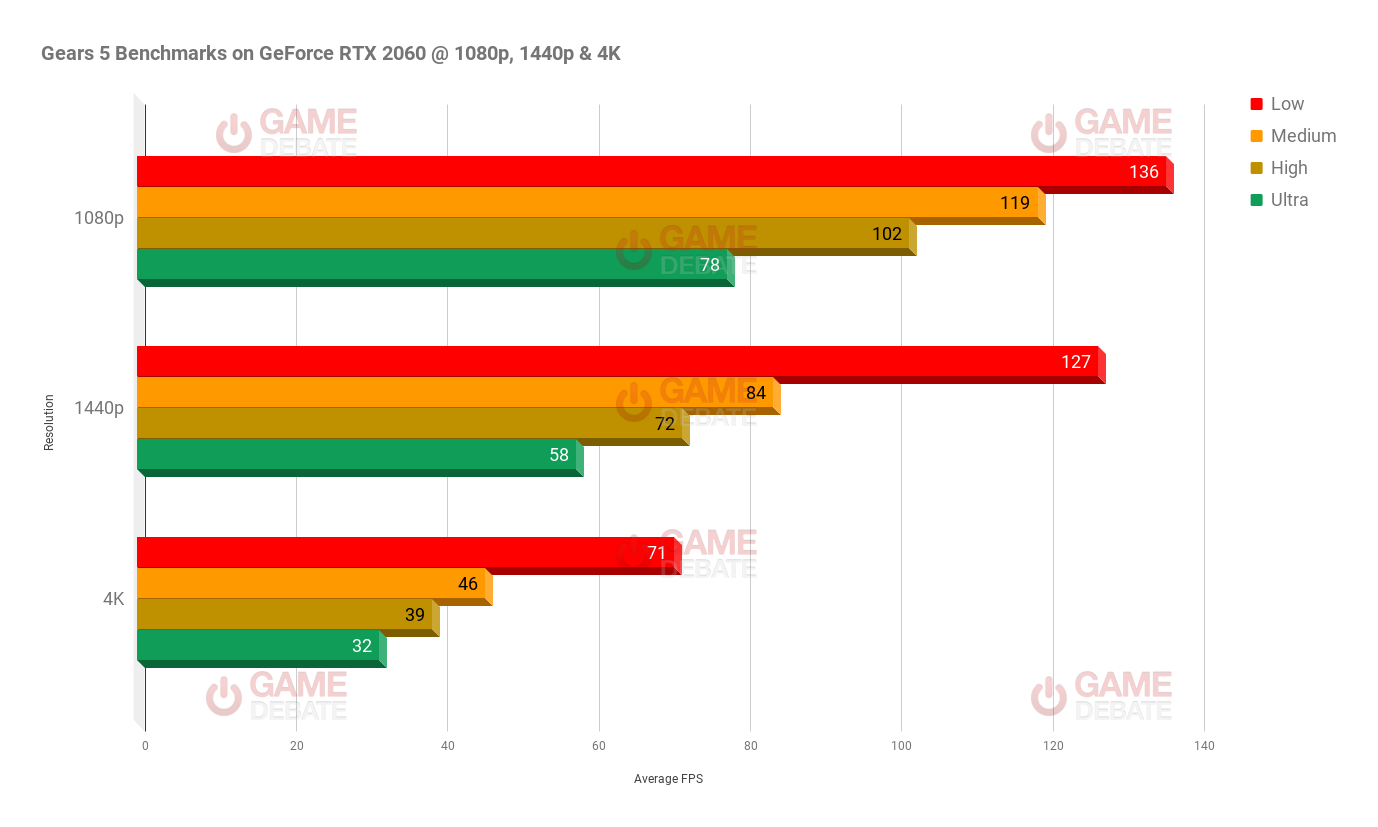 As a point of comparison, here’s a slider comparing the results from this benchmark test from our tests with the Tech Test version of Gears 5.

Slide the cursor over to compare results

As you can see, there’s usually just a few percentage points in it. For those that have changed, it would appear as if The Coalition have tweaked a few bits here and there behind the scenes to offer up more playable Medium settings, as well as achieving a fairly significant 20% bump to 4K/Ultra performance. That particular benchmark still isn’t what we’d called playable though. We wouldn’t recommend you play Gears 5 with a GeForce RTX 2060 at 4K/ultra settings.

1440p/High is absolutely the sweet spot for this GPU while playing Gears 5, locking into a 72 fps average that rarely ever shows any signs of dipping below 60 frames per second.

For our Gears 5 Tech Test benchmarks, we used this official in-game benchmarking tool. We ran the test at three different resolutions (1080p, 1440p, 4K) and across all four graphics presets. We have then provided both the average frame rate and the average minimum frame rate based on the bottom 5% of frame times. 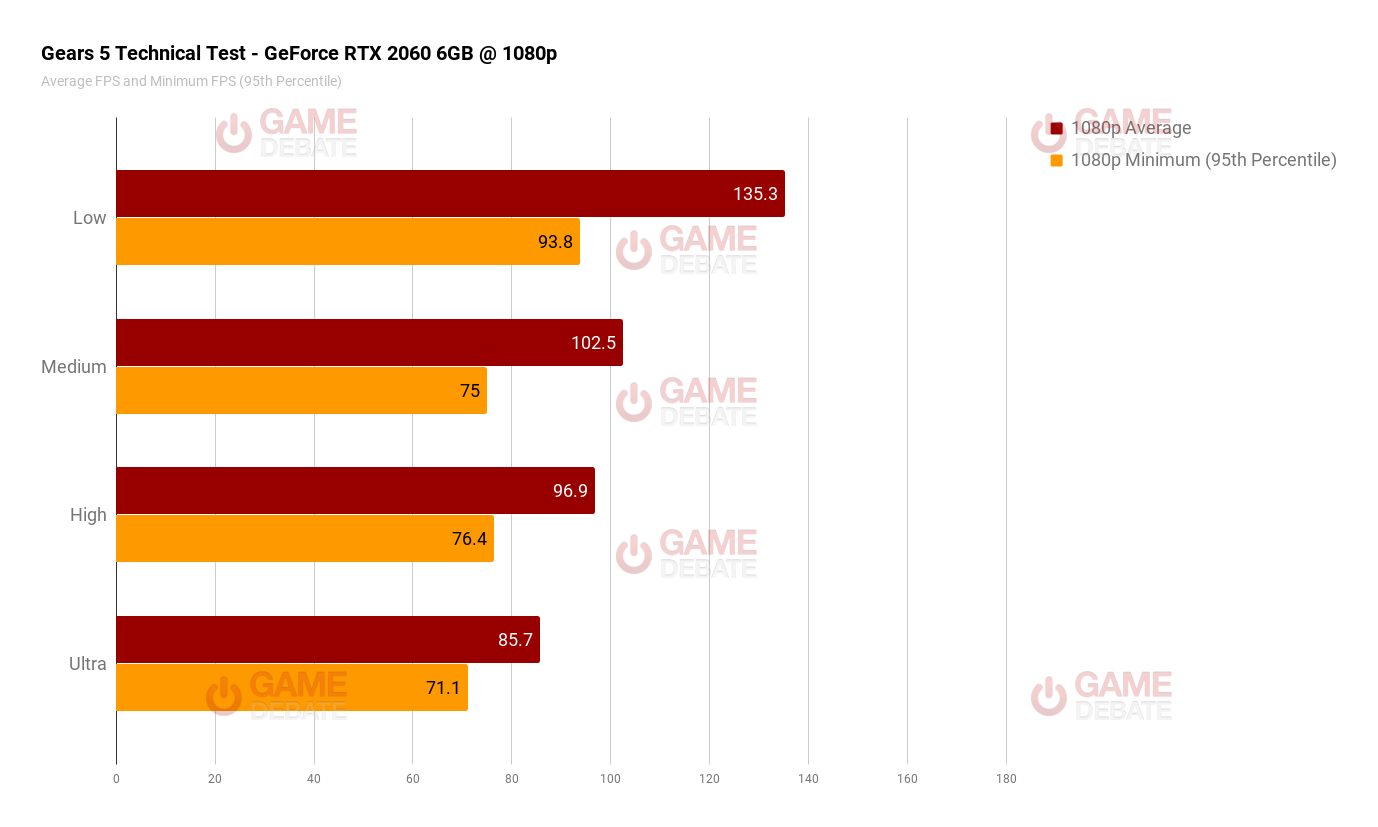 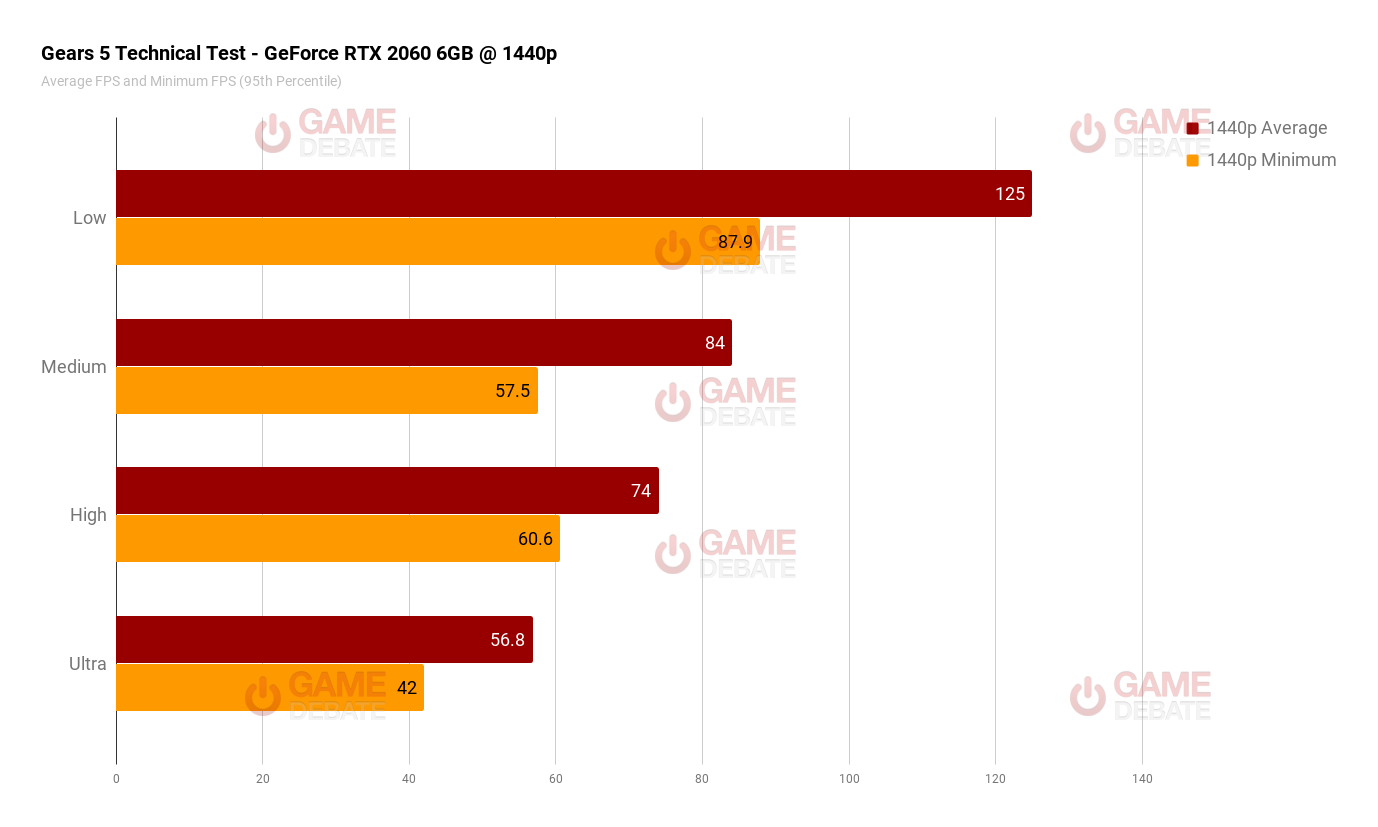 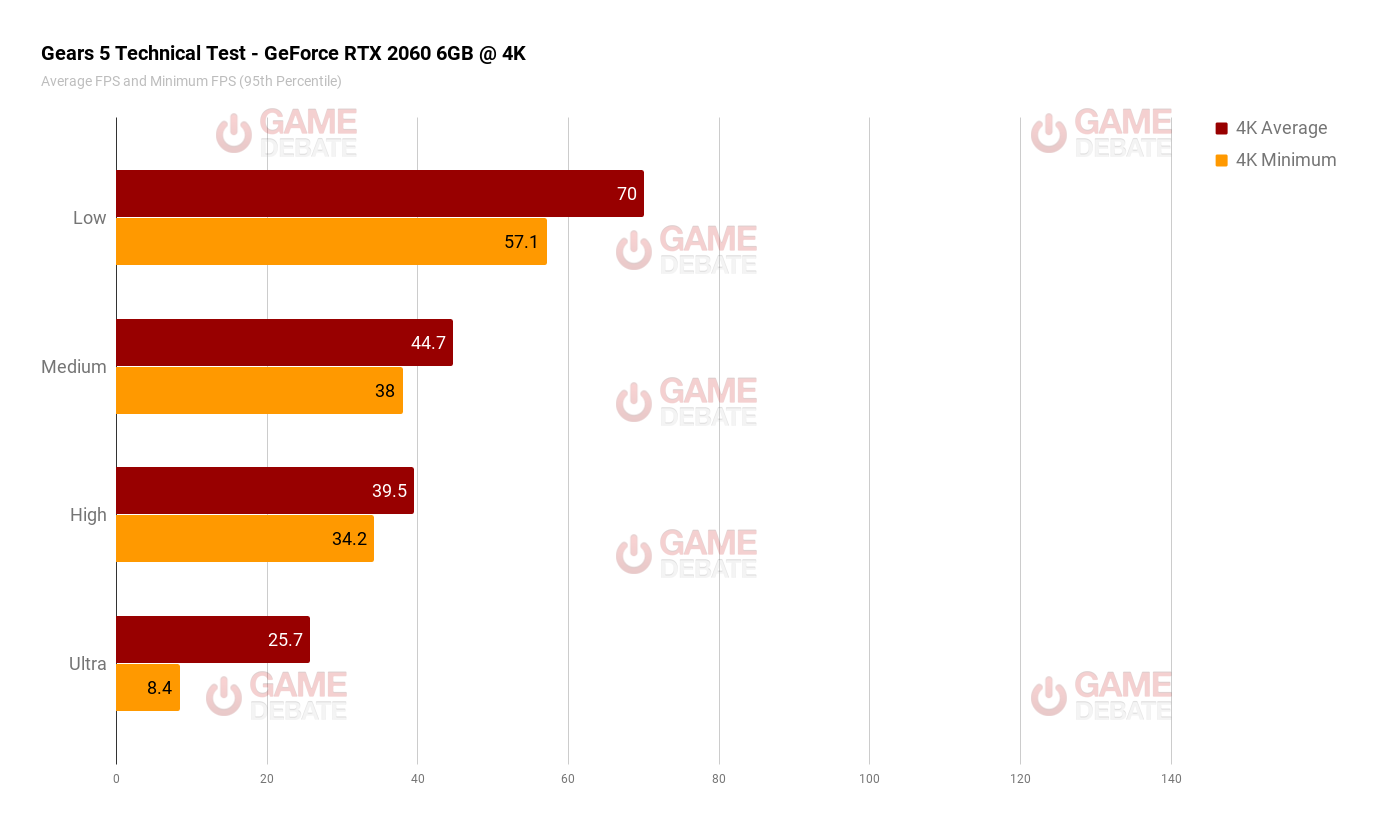 And it's the same test again, this time with the low-end Radeon R7 370 2GB and focusing on 720p and 1080p screen resolutions. Benchmarks at 1440p are fairly redundant here as the Radeon 370 just isn't equipped to run Gears 5 at this resolution. 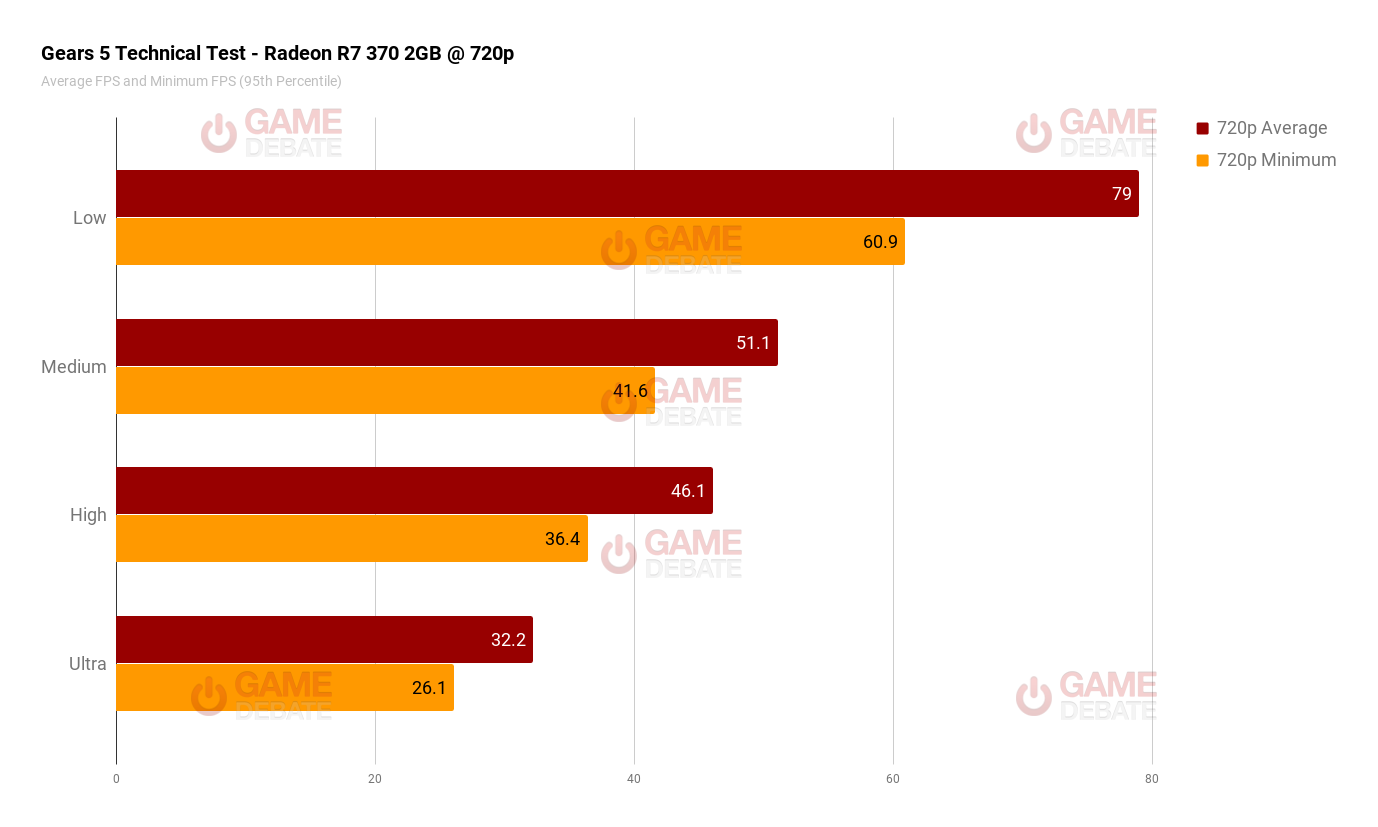 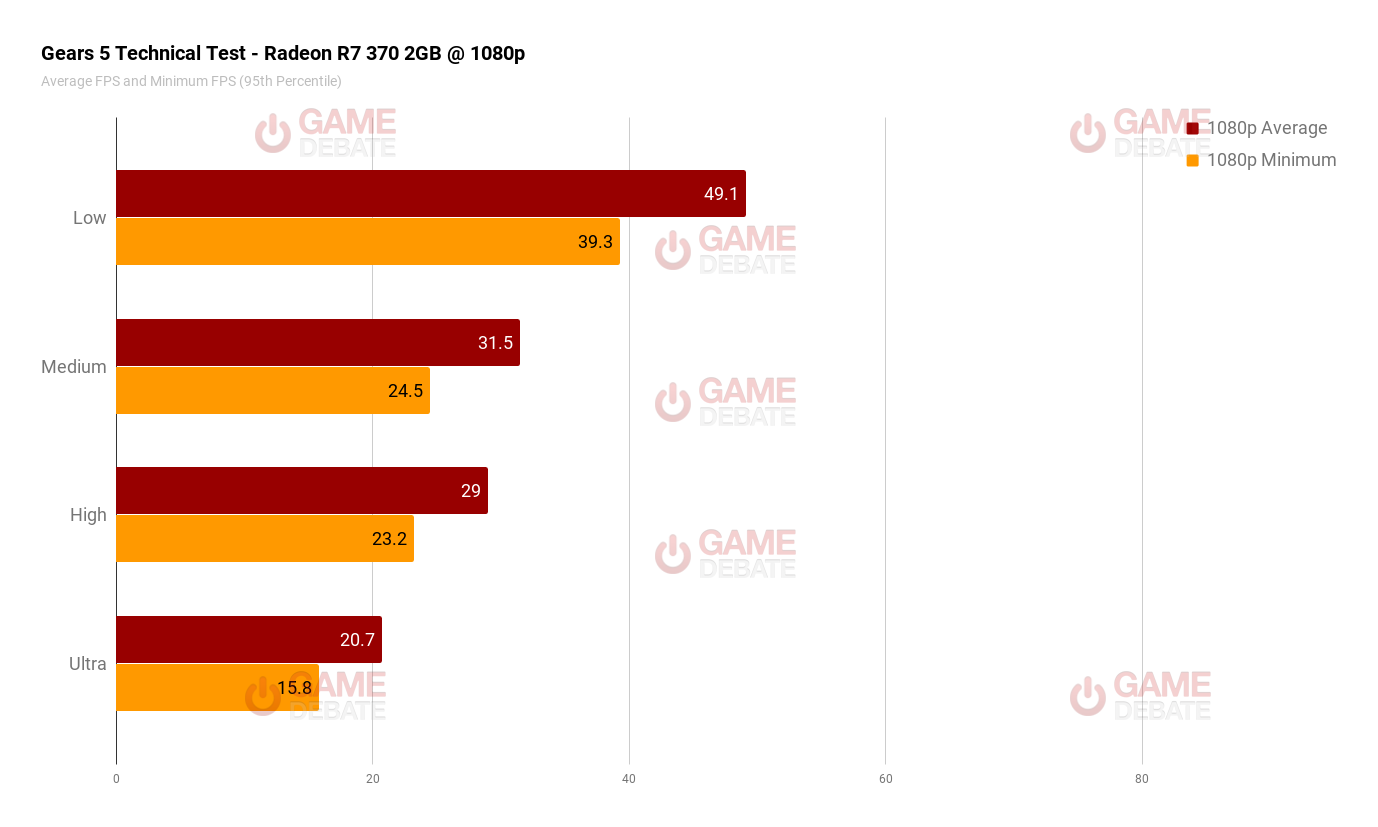 Visually, Gears 5 is fairly good but not exactly mind-blowing. There's some great model detail up close on Ultra, as well as some atmospheric lighting but, for those who played Gears of War 4, it's definitely a whole lot more of the same for the most part. It does the job, basically, but it does mean the final product isn't overly demanding.

System memory usage in Gears 5 rarely ever tips over 5GB from our experience, so the 16GB recommended RAM requirement starts to seem a little ludicrous. Likewise, our VRAM usage on the 6GB RTX 2060 peaked at 5.15 GB, so 6GB VRAM should be plenty.

In our system, VRAM usage looked much like this on Ultra:

The GeForce RTX 2060 can hitch a little at 4K resolution and even on 1440p though. It's not the VRAM that's at play here though; the GPU is at 100% capacity and is being maxed out at 1440p/Ultra and 4K/Medium and upwards. Squeeze in a mite more optimisation between now and launch though and we can foresee the GeForce RTX 2060 eventually hitting 60fps @ 1440p Ultra.

The GeForce RTX 2060 begins to get a bit battered around at ultra-HD, however, and we'd have to hand this over to the RTX 2070 Supers of this world and above. Still, an RTX 2060 was never designed as a 4K graphics card. Anyone with this GPU and a 1080p or 1440p monitor can be assured of some pretty great performance.

I have this issue on campaign that the texture sometimes become so blurry on everything except the face regardless of what settings I choose (I tried medium/high/custom preset) but it still runs on smooth 60fps. it looks worse than low preset. but if I choose "recommended" well, I'll get what I expect from that settings which is a little bit better than low preset. multiplayer no problem. Idk maybe the game doesn't let you go higher because I have low Vram? like "no! you cannot go any higher! oh you cranked it higher, here, 60fps with ****ty graphics!"

guys, is it time for me to change my cpu? i got it overclock to 4.4mhz and still i got 100% cpu usage and less than 70-80% gpu usage on this game, not bringing me 60fps.
on the benchmark for example o got 50% of gpu usage, and dips to 40fps, what is more strange is that the internal benchmark of gears 5, says that the game is 97% gpu bound, it makes to sense right?

Amazing optimization and graphical customization options honestly this might be one of the best PC ports ever made. The benchmark is better than standalone software and is actually reliable. Never drops below 100+ at all times for me truly a well optimized game even at 4K it runs 60+ however insane preset is different

With my rig (that isn't spectacular at all) i can run it on high no problems solid 60, it dips only in rare occasions, but i'm gonna see how it runs once the optimized drivers get released.

Yeah, but as i said it dips on cutscenes or during the loading intermissions, so far the reccomended options were on point, even tho i lowered them a bit cause i'd prefer to not dip at all.