Buckle up buddies, it's time to go and rescue papa Blazkowicz. Wolfenstein Youngblood introduces the Terror Twins, B.J.'s angry daughters who are intent on tearing apart Nazi-ruled 80's Paris in a bid to find their missing dad. It's Wolfenstein as you know and love it, this time with co-op action.

The system requirements for Wolfenstein: Youngblood have remained largely the same as they were for 2017's Wolfenstein: The New Colossus. It's business as usual on that front, with just a few tweaks and improvements here and there to the idTech 6 engine. But does that mean we can expect exactly the same PC performance from Youngblood? Let's have a look.

Sadly, as we reported a few days ago, Wolfenstein Youngblood is launching without the RTX-exclusive features such as real-time ray-traced lighting. Nvidia currently has a promotion running, giving away free copies of Wolf Youngblood with the purchase of a GeForce RTX graphics card. Sadly, their prime selling point isn't even usable yet so we haven't been able to benchmark. However, we will revisit Youngblood just as soon as RTX features are patched in.

There's no benchmarking tool so we opted to repeatedly run an early portion of the second level in Wolfenstein: Youngblood. There's plenty going on here in terms of enemy count and pyrotechnics, providing a suitable testing ground.

Youngblood is typically Wolfenstein in that it comes no fewer than six graphics presets. Ultra ends up in the middle of a pack which comprises Low, Medium, High, Ultra, Uber, and Mein Lieben. And, to be brutally honest, there's barely any difference between any of these. Visually, at least, because they may not look much better but they definitely come with a hefty performance hit.

So we ran through these benchmarks on an early level at all six graphics presets, taking the average frame rate at 1080p, 1440p, and 4K resolutions.

For this Wolfenstein: Youngblood benchmark, we used a GeForce GTX 1070 equipped with 8GB video memory. It’s backed up by 16GB DDR4 memory and an Intel Core i7-5820K CPU. 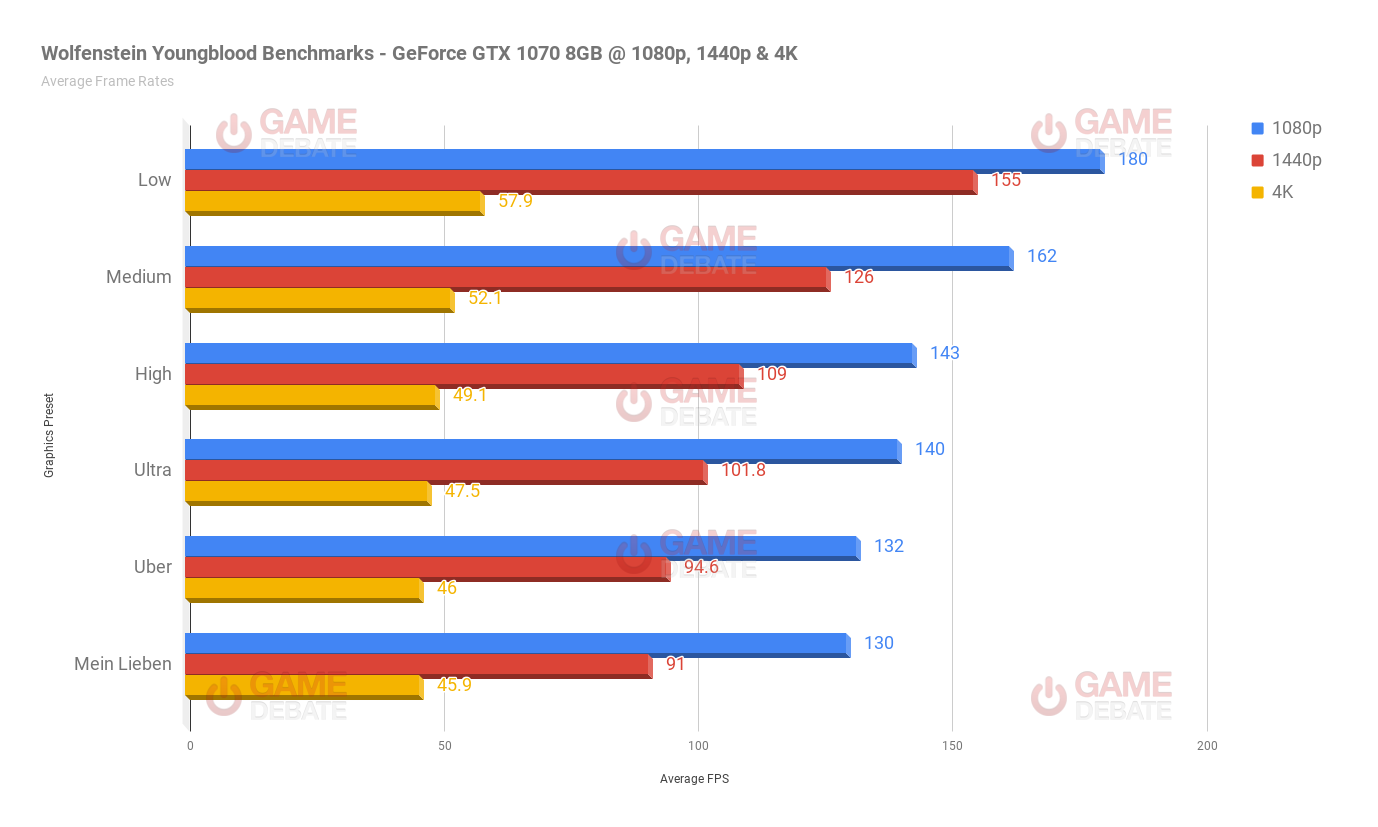 This is our first clue that very little has changed between The New Colossus and Youngblood. The GeForce GTX 1070 achieves remarkably similar results to the 2017 title. And, it has to be said, those results are quite fantastic. Wolfenstein: Youngblood is exactly a graphical revolution but it looks nice enough.

It all means the GTX 1070 has performance headroom to spare, notching up an impressive 91 frames per second average 1440p/Mein Lieben. This is the ideal resolution for this particular video card so it's nice to see it handle it with aplomb. This, in turn, means 1080p is a stroll in the park, while playable frame rates at 4K resolution are definitely possible. You may encounter one or two dips but, for the most part, the GTX 1070 delivers top-notch performance in Wolfenstein: Youngblood. Any graphics card that's faster can almost assuredly close in on 4K/60.

For a quick point of comparison, here's how the GTX 1070 fared in Wolfenstein II: The New Colossus: 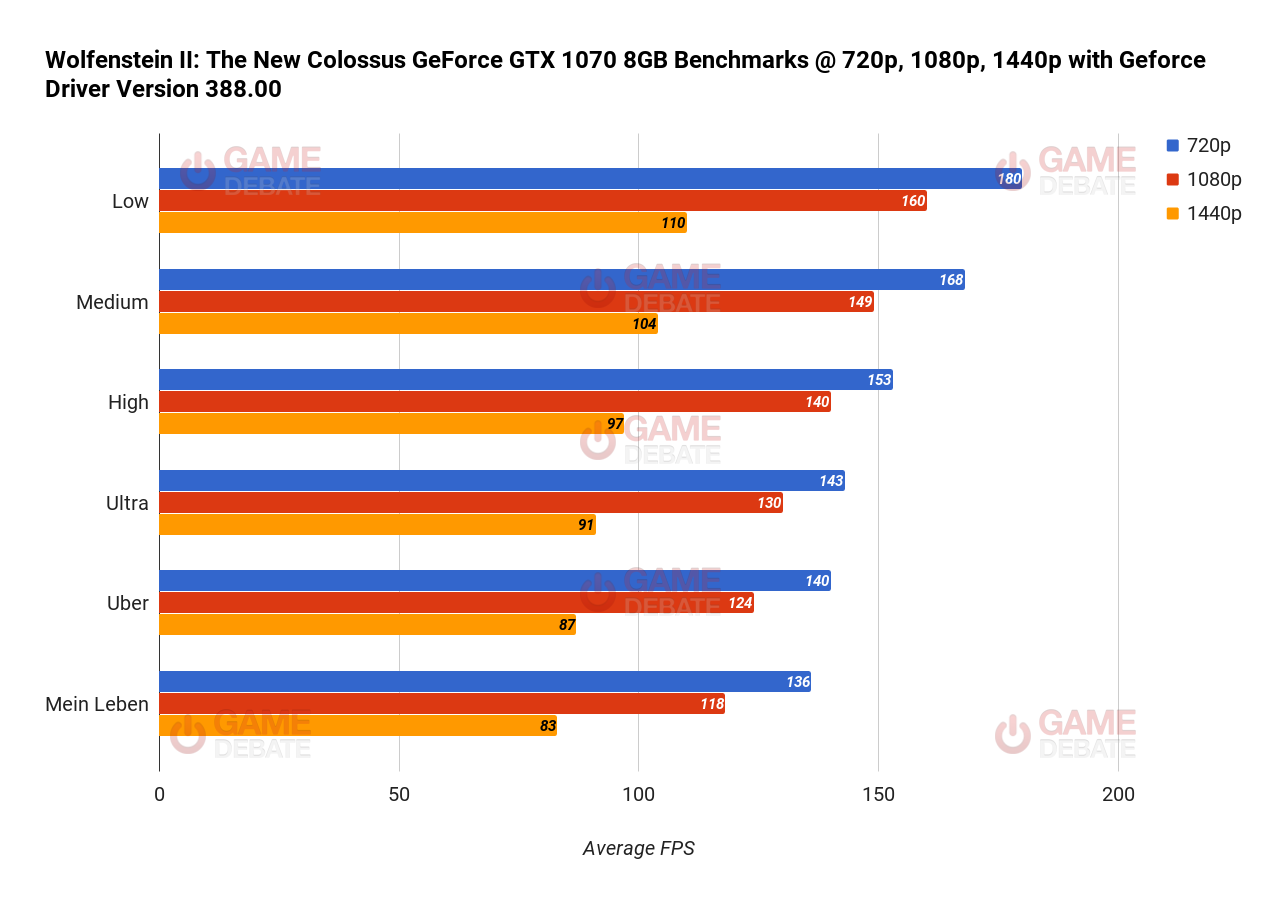 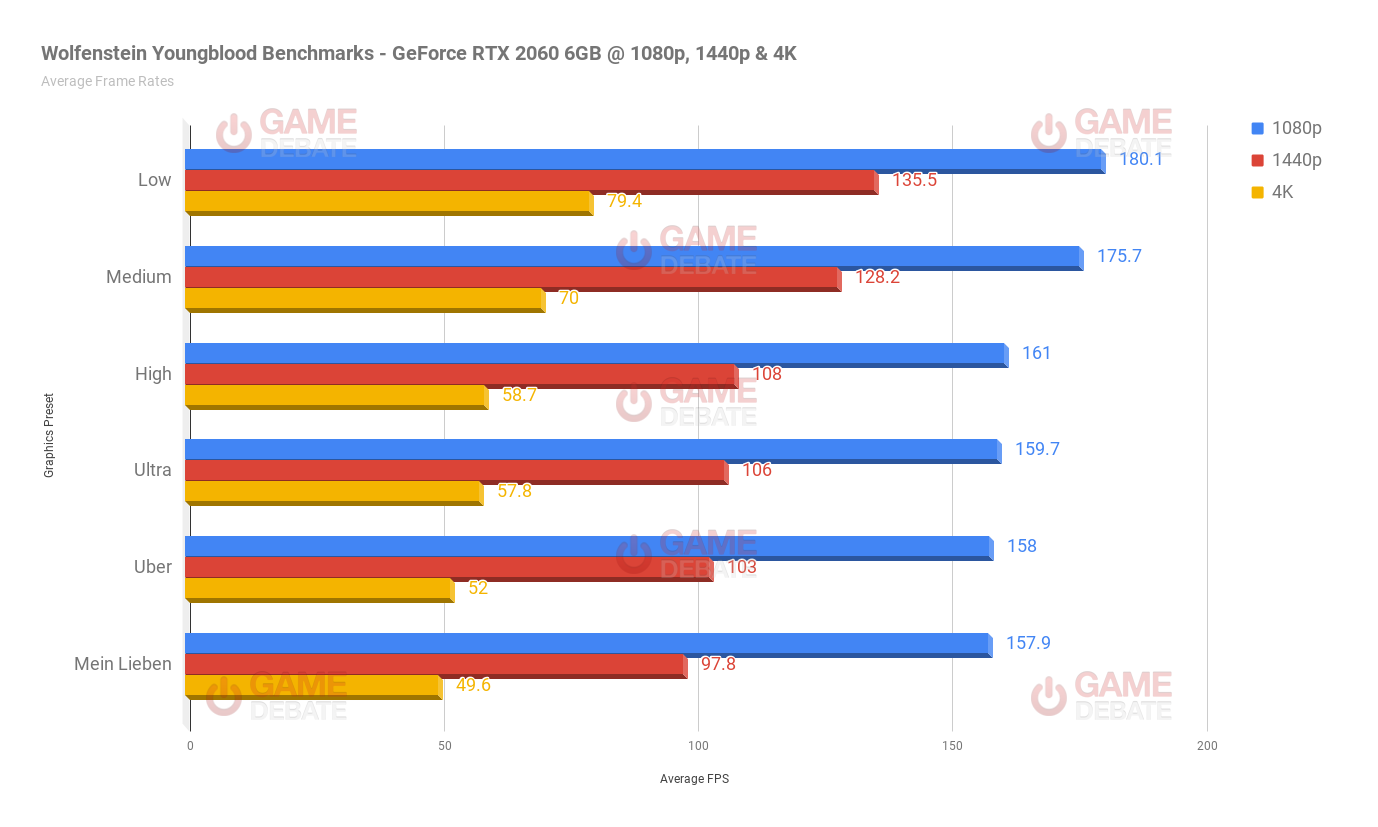 With the GTX 1070 running on cruise control, it was inevitable the RTX 2060 would enjoy a similar fate. The GeForce RTX 2060 6GB is the marginally faster graphics card, translating to marginally higher frame rates. The faster 6GB GDDR6 memory appears to negate the memory deficit of the 8GB GTX 1070, allowing the RTX 2060 to maintain a narrow performance advantage event at 4K resolution.

I personally don't mind a few minor dips below 60fps as long as they're not too low, and 4K/Ultra definitely felt acceptable to me. Locked 60fps in Youngblood can definitely be found at 1440p/Mein Lieben though, and performance was absolutely belting at these settings. Gameplay was liquid-smooth and, well, running around shooting Nazis is always better with a nice, reliable FPS. 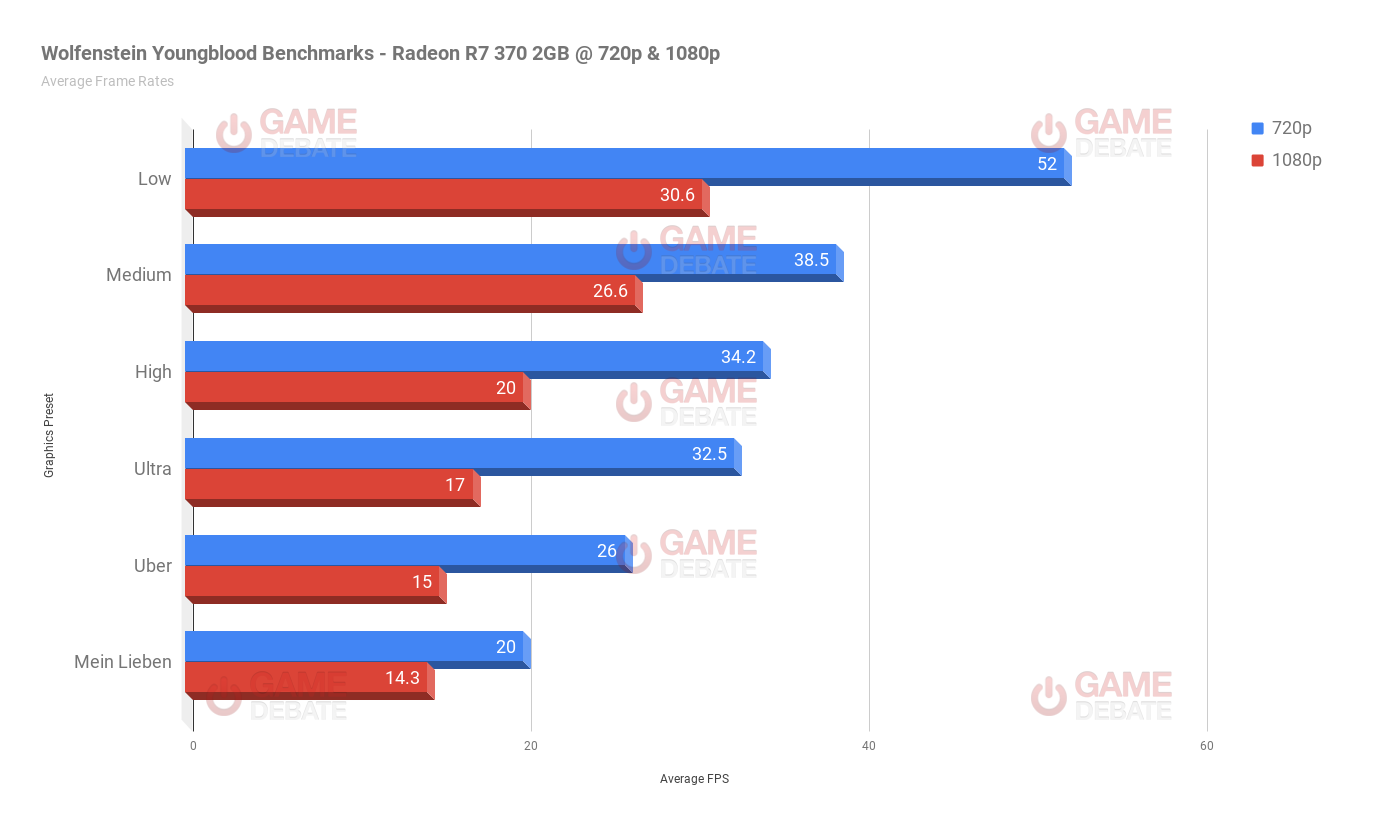 In a nutshell: It's very difficult to recommend even attempting to play Wolfenstein Youngblood with a graphics card such as the Radeon R7 370. It truly does struggle. Playable frame rates at 1080p are near enough impossible. On Low the R7 370 2GB averages 30fps but dips down during intense firefights. It's not enjoyable nor satisfactory gameplay experience.

Things fare a little better at 720p, but not by much. At this resolution, Wolfenstein: Youngblood begins to look pretty smeary and indistinct, especially if you're using TSSAA or motion blur. I found 720p/Low playable enough, although every setting had frame rate dips which caused me to miss shots.

It's certainly possible to play Youngblood with such a video card then, although not really recommended. The Radeon R7 370 2GB is below the minimum system specs for Youngblood, of course, so this was, to a degree, to be expected. The minimum spec GPUs are a GTX 770 or Radeon R9 290, and we think they would achieve far more playable frame rates. However, even at 720p/Low, the R7 370 was giving repeated VRAM memory warnings so even the GTX 770 may struggle with playable frame rates at 1080p.

Considering the Radeon 270's struggles here, we thought it best to see just how much video memory Youngblood is guzzling. As it turns out, it's of little surprise this low-end graphics card was struggling. 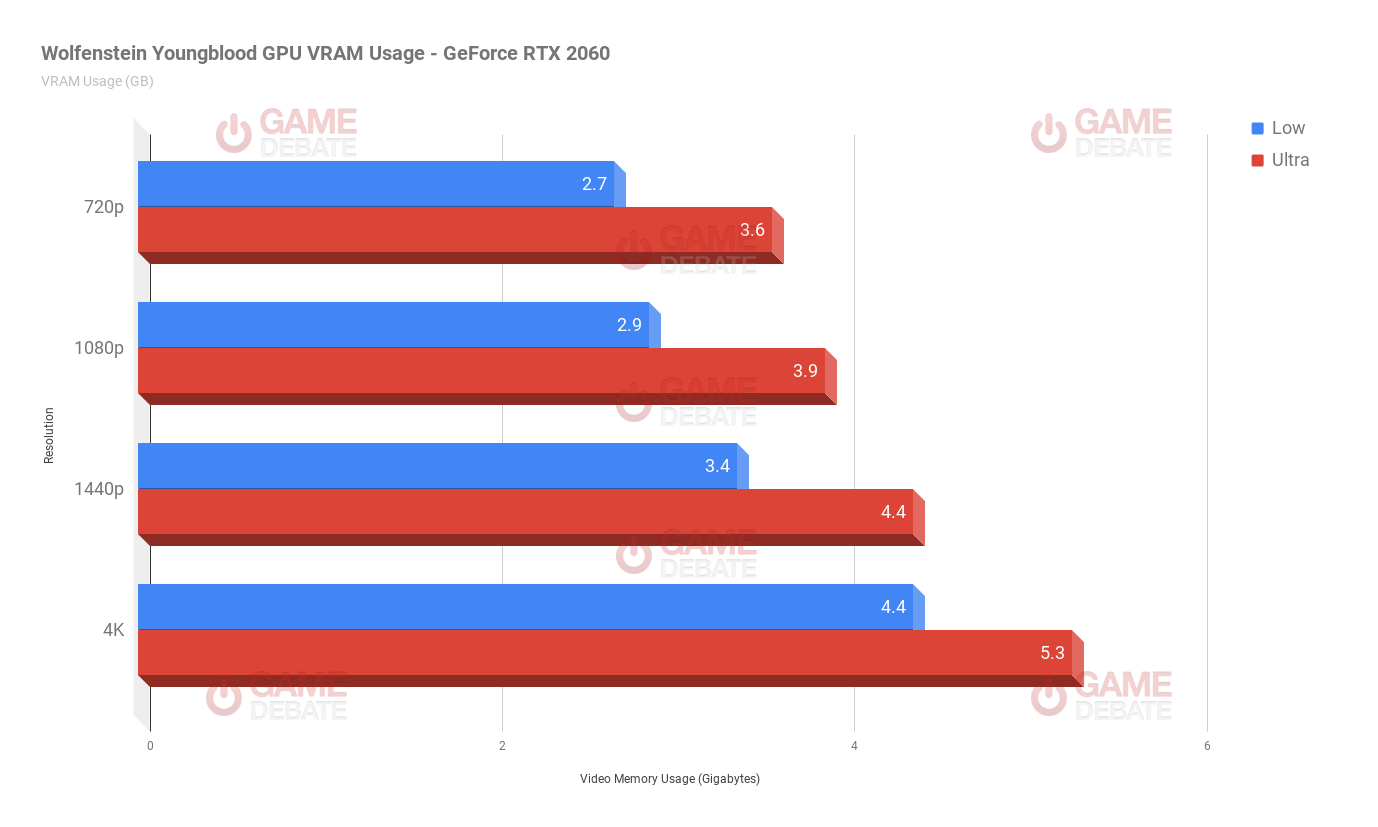 Yep, Wolfenstein Youngblood burns through the video memory even at low resolutions on our test setup. As an idTech game, Youngblood takes advantage of megatextures. The end result is very static VRAM memory usage but also quite high. Considering the minimum spec GTX 770 graphics card has just 2GB GDDR5 memory as default, it's perhaps disingenuous to suggest you'll be fine playing Wolf: Youngblood with it. On the basis of these results, you won't. It's going to be eating into your system memory and it's probably going to hack your performance apart.

On this basis, you're probably going to want at least a 3GB graphics card in order to run Wolfenstein: Youngblood at playable frame rates.

“The fact that it works well at launch is great to me (Looking at you Horizon...). I'm hoping they ev...” - RealMTL

Considering that it says minimum of 4gb for vram, I think you proved they weren't kidding.

I wouldn't even think about 3gb. A 970 might be okay but performance will suffer when that last 512mb of vram gets used.

I honestly want to hear from anyone that plays this game with a 970.

fiouuu i think im fine with my rig but its certainly poorly optimized ...

This is not how video memory works in most games. In many cases game engine uses more vram if it sees that Your GPU has extra vram available. It basically caches more stuff.