Up For Debate - Do you like the changes to the Steam Library?

This week, Valve dropped what is probably the largest Steam update in many a year. Our game libraries have been given a big overhaul, both visually and in terms of feature set. It’s only available in the Steam beta client, for now, but log into Steam and you’ll be greeted with a new library landing page, a shelf view with box arts for your games, and revamped events and community features designed to keep you up to date with what’s been happening in the PC gaming scene.

By now, those of you’ve opted into the Steam beta will have had a good few days to mess around with the overhauled library features. It’s time for the big question - what do you think?

How to update to Steam library beta

Personally, I came away a little disappointed. It doesn’t feel like any of these are particularly groundbreaking changes and it only affects a single aspect of Steam - the library. Having the option to view the box arts is nice, although half of them seem missing or incomplete which really sort of sets me off. When I compare it to GOG Galaxy 2.0, it doesn’t look half as good, nor as feature-rich in terms of managing the library and bringing it all my games from all the other platforms. I’ve got access to about 400 games on Steam, for example, while GOG Galaxy shows me I actually own 793 games across all available platforms.

I also don’t tend to use Steam as a full-screen window so the library home page appears very cramped. There’s a lot going on there in terms of news, recently played games, and friend activity, before I can actually view my library.

It’s not all bad though. I definitely do find more information is surfaced in terms of games with ongoing support. The Rocket League page in my library is filled with goodies. Most of the single-player games look barren but this is clearly a forward-thinking feature. Dynamic collections are also pretty awesome as well, letting me build a filter of single-player RPGs with controller support with a matter of seconds. What I absolutely love is being able to sort by Metascore as well though. I’ve already got a filter for games I’ve completed, so with a few button clicks I can build a shelf of games I haven’t completed, sorted by Metascore. I can then get down to the fun part of playing all the best games which I haven’t yet played. 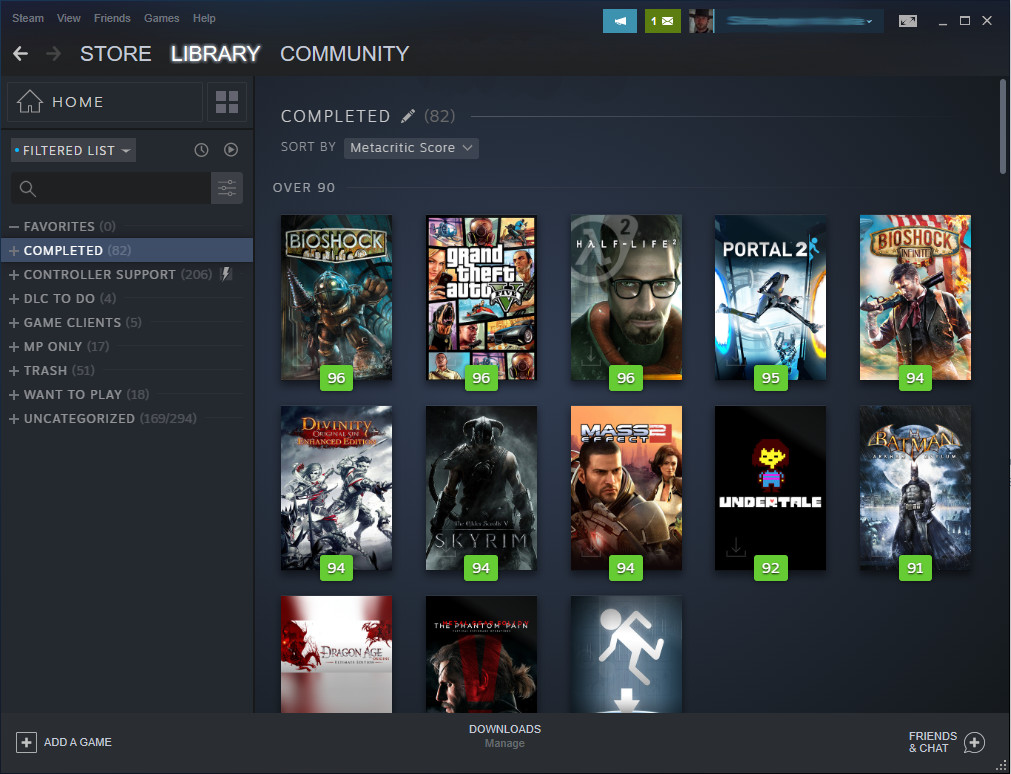 Some of it’s a bit too fiddly and I’d love more options, but the kernel of an idea is certainly there. It would be nice to build franchise collections instantly, for example, but I’ve got to manually go through and select each Tomb Raider rather than being able to search for the name.

Plenty of teething issues then, but a welcome change all the same. Valve still has work to do here but the building blocks are in place for a far more comprehensive library tool; fundamental when we’re talking about a platform on which some users can very easily own hundreds of even thousands of games.

Anyway, I could jibber-jabber on for ages about what I think of this particular overhaul, but it’s probably best I hand it over to you to see what everyone else thinks. Are you pleased with the changes Valve has made? Are there any further improvements you’d like to see implemented? Cast a critical eye over the comments section below!

Do you like the changes to the Steam Library?

Haven't used Steam for over 4 months as got sick of how it lives off Devs hard work sitting on their rumps for ages & did nothing with the opportunity it had, security flaw, no half-life, Devs own store fronts HAS BEENS

Not bad, I haven't tried it though since it's still in beta. Hoping it stays lightweight like current version.

Haven't logged onto Steam for a month so I honestly don't care.

its great, but still much more things to be added sure.

also, anyones shelves disappearing after turning pc off and back on? especially if theres more than 5 shelves??

There is still a lot of room for improvent but overall Library looks beter than ever and no major complaints on it either. Probably only thing I would like is that they add a "What's New" tab for every game instead of having it mixed for all games. Also "Filter" feature needs improvement like hide betas etc.

You can already hide games that aren't installed. Next to "Filtered List" there's two buttons and the play one is to only show games installed or that can be streamed.

Nah, I liked the previous, much simpler look way better. I aint down with this "modernized" look.

I need to get used to it, but it's not bad and doesn't seem that resource intensive at the moment. It's just a bit slow for me compared to the previous version. That might just be, because I don't have hardware acceleration on or because I have a ton of games in my library. It's also a bit annoying that the family sharing drop-down is gone too. I did notice that the new Steam client did show some other games I own, that weren't shown previously and I can see more test servers now.

yeah it brought back all the betas,demos,trials and free games and other stuff like software 3dmark i used previously for some unknown reason. You can hide them all but its annoying espeically if you got a lot of them XD

Yeah, I was really confused at first and I already had collections for test servers, demos and betas. I just placed all the new stuff under there too I also unticked software from the filtered list, so I don't really see them.

It's great, but I hope the rest (shop/community hub/forums etc) follows rather soon. Cause right now the library kinda feels like it's own modern module that just directs you to dated slow websites for the most part.

Yeah, an overhaul to the whole shop would be appreciate.

It looks good enough, but I'll wait until the version is fully released before trying it.