It’s very unusual for a retailer to share with us sales specifics but Mindfactory, one of Germany’s biggest PC hardware retailers, has been tracking Intel vs AMD sales data and came up with some interesting results. Mindfactory has been collating how many AMD and Intel processors it’s sold since 2015, revealing AMD CPUs are now outselling Intel processors by a ratio of more than 3 to 1.

At this point, Mindfactory is selling around 17,000 AMD CPUs per month, compared to just 5,000 Intel processors. Intel has experienced a seemingly inexorable decline since a (brief) spike in late 2016 when Kaby Lake arrived on the scene with its 14nm+ architecture.

The data tracks an interesting journey from AMD’s relative failure with its Bulldozer CPU architecture right on up to the release of Zen 1 and Ryzen 1st Gen in 2017. This was the catalyst for a rapid turnaround for AMD, dragging it out of a long-term slump and providing Intel with some much needed competition.

Team Red managed to draw itself level with Intel’s sales within a matter of months of Ryzen launching, eventually overtaking Intel’s sales rates during late Summer 2018. At that point we see a huge spike thanks to the launch of Zen+ and Ryzen 2nd gen, followed up by an even steeper ascent in July of this year when Zen 2 and Ryzen 3rd Gen launched. 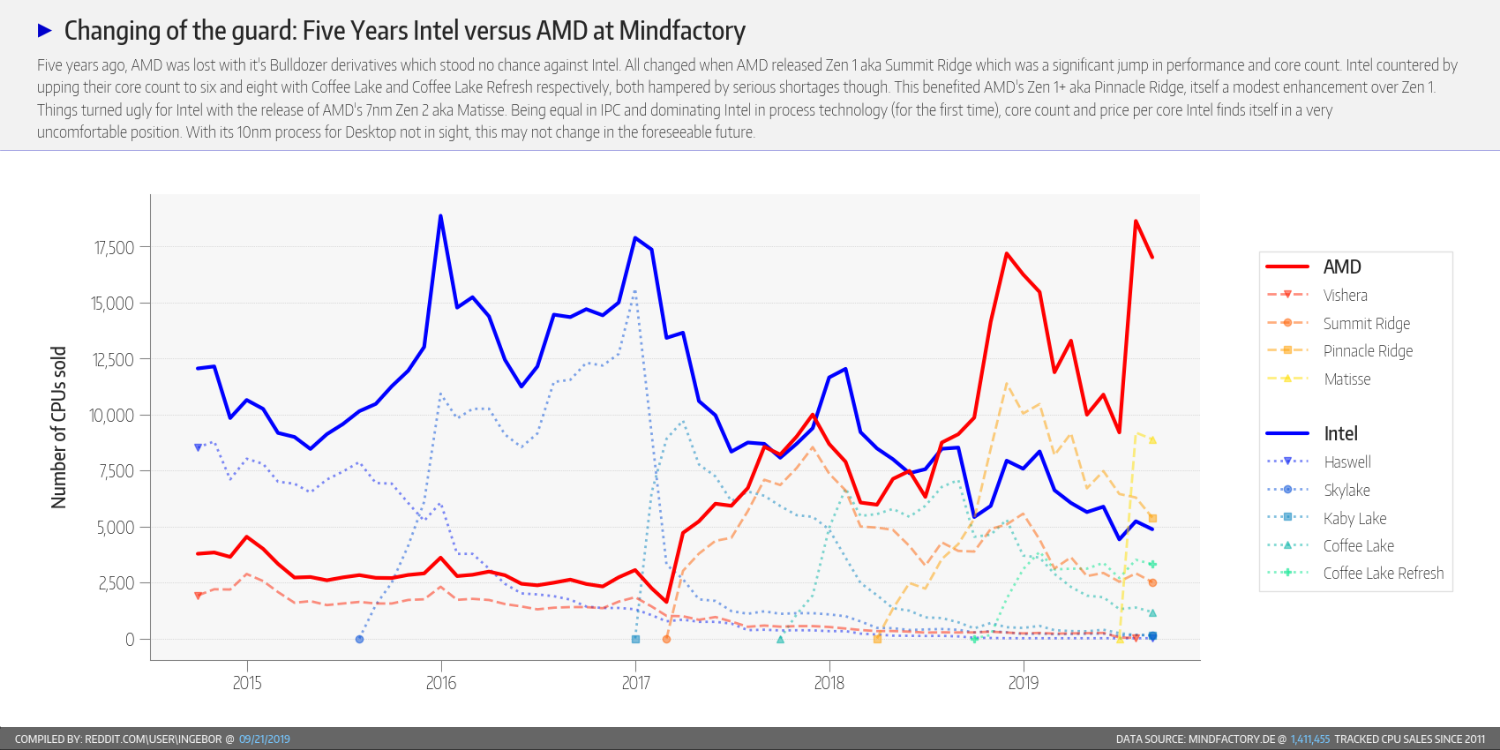 The major caveat with these sales figures, obviously enough, is they apply to just a single retailer in one country and may not be totally indicative of global sales figures. Mindfactory definitely seems like a PC gaming-focused retailer, supporting the idea that these figures are at least indicative of gaming trends.

It’s tricky to tally this up with Steam Hardware Surveys when they account for total users rather than monthly sales, although we are seeing a (very) gradual shift in AMD’s favour. In June 2019, 17.88% of Steam users surveyed had AMD processors, rising to 18.95% by the end of August 2019. It’s all a bit apples and oranges though, and notoriously unreliable data at that.

With sales figures like these though, AMD could really begin to regret its recent production woes. Stocks of top-end AMD Ryzen chips are beginning to run a little dry, while TSMC has upped lead times from 2 to 6 months for 7nm chip fabrication.

On current evidence, AMD has reached a major turning point then. Do you think AMD can maintain this fantastic momentum, even with limited supplies? What could Intel do to revert the slide? Let us know what you think of the situation below!

“And this is why I'll set sail for FC6 when I feel like maybe playing it. Stopped buying ubishïte gam...” - xquatrox

“If you read the TOS when you buy games, I strongly suspect the what you agree to isn't actually owni...” - Hydraclone

Competition is great but i still want more.

Year of AMD that is.

It's good to see AMD getting back into the competition, but we can only wait to see what will happen in the future.

wanna bet intel is moving god knows how many times more oem,laptop systems compared to AMD. The DIY market share is quite the small part of the cpu market overall.

The prices for the AMD CPUs will likely go up, this means Intel may have a way back in, in the short to middle term. I am for neither company; when companies are as large as them they don't do it for welfare.

Did u sell ur kidneys to get that sexy af gaming rig or what.Maybe u were born with a golden spoon in ur mouth.

As it rightfully should. Period.

And so the blue sky becomes red