What do Decals and Decal Filtering do - Graphics Settings Explained

Decals is a fairly wide-ranging graphics setting which dynamically applies textures over an underlying texture. This can include bullet holes, blood spatter, dust, etc. These will be applied in a pseudo-realistic fashion. Shoot a wall, for example, and a decal of a bullet hole will appear at the point where your bullet struck.

Decal Filtering is a further effect layered on top of Decals. It typically determines the level of Anisotropic Filtering (also known as Texture Filtering) which are applied to the Decals in the environment. Decal Filtering may be a slider, Low/Medium/High/Ultra, or the traditional Anisotropic settings such Trilinear, AF 2x, AF 4x, AF 8x, and AF 16x. The higher the setting, the more oblique the angles at which AF will filter the texture, reducing the amount of blur and preserving the detail of the texture.

For the examples, we’ll start with Decals. I was planning to showcase Call of Duty: Modern Warfare but alas, the beta has ended. COD:MW has a Decal Off option which is really quite noticeable. So instead, we’ve got Wolfenstein: Youngblood. While the Decal setting can sometimes affect the render resolution of the Decals, in Youngblood the resolution remains the same across any setting.

What Ultra actually does it allow for the rendering of more Decals simultaneously. For each of these screenshots I emptied a couple of pistol clips in the wall and there are a few more Decals visible on Ultra. While you can’t tell from the screenshots, when the Decal setting is lowered you can see the earlier bullet holes disappear in front of your eyes as you’re making additional holes.

Body sway was the curse of me for the next screenshots, so you’ll have to excuse the slightly differing angles. However, this comparison is designed to show the effect of Decal Filtering on Decal quality. 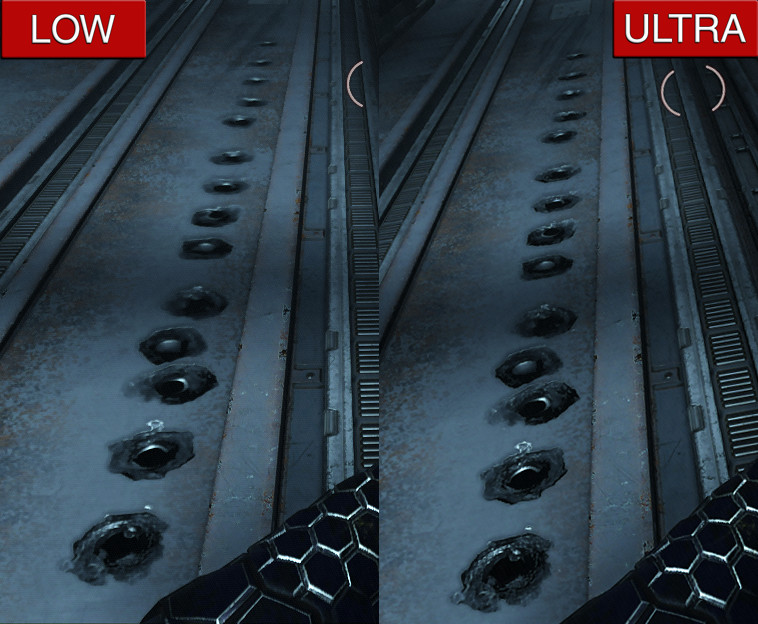 How demanding are Decals and Decal Filtering?

Decals and Decal Filtering typically have an extremely minor impact on CPU and GPU performance. The frame rate performance impact of Decals for a modern graphics card is close to 0%.

You will occasionally be given a few granular choices in terms of Decals, usually dictating the number of Decal renders which can appear at any one time. Set this to Low and the first bullet holes you made, for example, will begin to disappear when you reach the cap. Set Decals to High and you can expect to see more bullet holes and blood spatter.

Is it worth enabling Decals and Decal Filtering?

Yes, it's absolutely worth enabling Decals due to the almost non-existent performance impact. Decal Filtering may implement a tiny strain on the GPU but none of which should contribute too negatively toward frame rates.

I really enjoy the fact that they started using parallax mapping in decals these days, giving them a lot more realism at grazing angles. Can't tell well from the screenshots here (and I've not bothered with the game), but they don't seem quite as "3D" as in some of the games I've seen. Yes, I'm a pixel-peeper...

Is the last paragraph a bit wrong? It's about SSS not Decals :P

Probably a little bit of copy and paste from the previous article but the point is exactly the same. No need to be so picky about the wording.

While giving it the benefit of being cool extra content and not strict news, a whole section of copypasta isn't being nitpicky. It's skipping on read through

Apologies, squeezed through. Trying to fill up the weekends tends to be busy on my lonesome so occasionally don't have time to double check but I've fixed it now