Borderlands 2 second campaign add-on was revealed in October, when PS3 players found three new Trophies that came with the newest patch, suggesting a new DLC based on the weapons manufacturer Torgue.

Now, Gearbox has officially announced the second DLC of Borderlands 2: Mr. Torgue's Campaign of Carnage so lets take a look at whats in store...

Enemies will be related to teh center theme, Races and Explosions. Like in the first story DLC, when enemies would be Pirates, Anchormen and Buccaneers, Mr. Torgue's Campaign of Carnage will feature new enemy types, such as but not limited to Bikers, Enforcers, and the Badassaurus Rex, a gargantuan robotic dinosaur that breathes fire. If that doesn't sound awesome, I don't know what does.

Just like people were expecting from the second add-on and based on the title of the DLC, it will include an Arena. Fans will sure get mad at this, since the "Mad Moxxi's Underdome Riot", the second DLC from the original Borderlands, was basically this giant arena when you fought hordes of enemies, and nothing else. No missions, no new enemies, just fighting for your life so spectators have a good laugh.

This new Torgue DLC is supposed to not just have a mindlessly killing time inside the Arena, but actually have side missions and story. Here goes the interesting part, a second vault is apparently discovered that's been buried under a giant unknown crater that'll only open for whoever "feeds it the blood of the ultimate coward", this might lead us to assume that in order to get to the newly discovered Vault, players will have to beat the Arena and, well, feed the loser to the crater.

A new type of currency is also featured for this DLC, "Torgue Tokens". Unlike "Seraph Shards", the currency included in the Pirate's Booty DLC of Borderlands 2, this currency can't be directly earned by farming a Raid boss, instead, they will randomly drop from enemies once you kill the hell out of them. Vending Machines that exclusively accept this new currency will be spread across the Campaign of Carnage, and, check this out, they will always have a Legendary Weapon as the Item of the Day! I'm sure players will spent countless hours beating baddies just to get their share of Torgue Tokens and increase their inventory with spanking new Legendary Weapons. 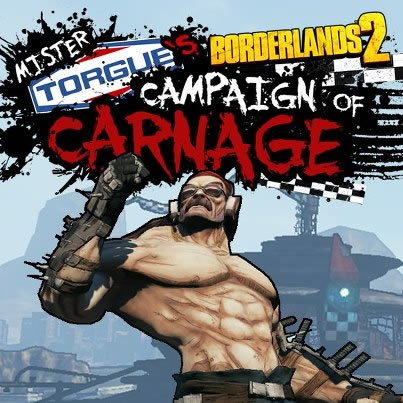 Just like in the Moxxi's Underdome, players will not get experience from killing enemies inside the Center Arena of Torgue. This was a bit of an issue in the first Borderlands, since I would spend a lot of time making my way through seemless bandits, and none of them actually gave any experience at all, while we all know that leveling up is one of the most satisfying feelings of an RPG.

New characters are included, such as Mr. Torgue, the president of the weapon manufacturer Torgue (figures), but old ones are back, like Tannis, Moxxi and Tiny Tina, that cute little 13 yeard old demolitionist expert you met in the story of Borderlands 2.

So, Mr. Torgue organizes a tournament to find the most ferocious and adventurous guy in Pandora, by fighting in the arena built around the "Badass crater of Badassitude". That sounds exciting, so it oughta be worth the journey back to an Arena DLC.

Now, about raising the level cap, developers have only stated "We’re discussing trying to do it in a more interesting way", this is highly interesting, will they add new Skills to each class so they can raise the level cap by much? Or it's a gimmick for something that will not really be a level Cap rise? Only time will tell what's in store for ur.

Gearbox is already talking and brainstorming about the next DLC. These guys really work hard, DLCs are being released with not even a month of difference between each other. That's why I'm waiting for a GOTY version, since this is one of those games that will suck dry your wallet in exchange of months of fun and killing.

Mr. Torgue's Campaign of Carnage will be availabe for $9.99, or 800 Microsoft Points, for the console counterpart. This DLC is the second included on the Season Pass, that costs $29.99 and will grant access to four DLCs, including the already existing Pirate's Booty and the three upcoming ones.

Torgue guns are my favourite :D So I can't wait for this DLC :)

It's all about explosions ;)

Borderlands 2 is great! but I feel it's more like an expansion pack with lots of new missions because the graphics/interface/options haven't changed that much, but I like it that way! The original was soo good, it would suck if they messed it up trying to make it too linear like Crysis 2.

Oh you mean Borderlands 2 feels like an expansion from the original? Well it is the sequel. Good you are liking BL2 :D

Isnt this a bit too fast.I mean releasing the new dlc's for it is almost going like a chain reaction :D

Yes it indeed is, the four story DLCs were supposed to be released from october to June 2013, and we're halfway through and not even on December. Quick

Im one of the few who hasn't played the game so this doesn't interest me but knowing the fanbase, they must be pretty excited about this.
Anyway, Nice & detailed article. Thanks Ray! :)

Thanks :9 Yeah it's in part good news to have more content at hand, but Gearbox is releasing this stuff way too fast and with almost no time between them, that's too much money for a game. This better go GOTY