Salutations animal lovers (or haters, depending on your view of cages)! Red Dead may be swallowing up the headlines but a little gem known as Planet Zoo happened to launch on the same day. From Frontier Developments (RollerCoaster Tycoon 3, Planet Coaster), Planet Zoo is a zoological management sim with the sort of depth we've never seen before. It's out now, on PC, although it's certainly no slouch to run.

We've benchmarked each graphics option in Planet Zoo, recording the average frame rate (FPS) in order to determine the performance cost of enabling each of these graphical features. This allows you to see, at a glance, where the performance hits are going to come from, as well as which graphics settings we think you should enable (high priority score) and those which you can leave on Low (low priority score).

For the benchmark results below we used a AMD Radeon R7 370 2GB, an Intel Core i7-5820K 6-Core 4.2GHz, and 16GB DDR4 memory. We tested a medium-sized zoo with all the facilities which would stress each of these graphics settings as best as possible.

The further right the bar goes, the more demanding the graphics option is when switching from Low  (or Off) to Ultra. At a glance you can see which are the most demanding graphics settings and will therefore most impact your frame rate in Planet Zoo. 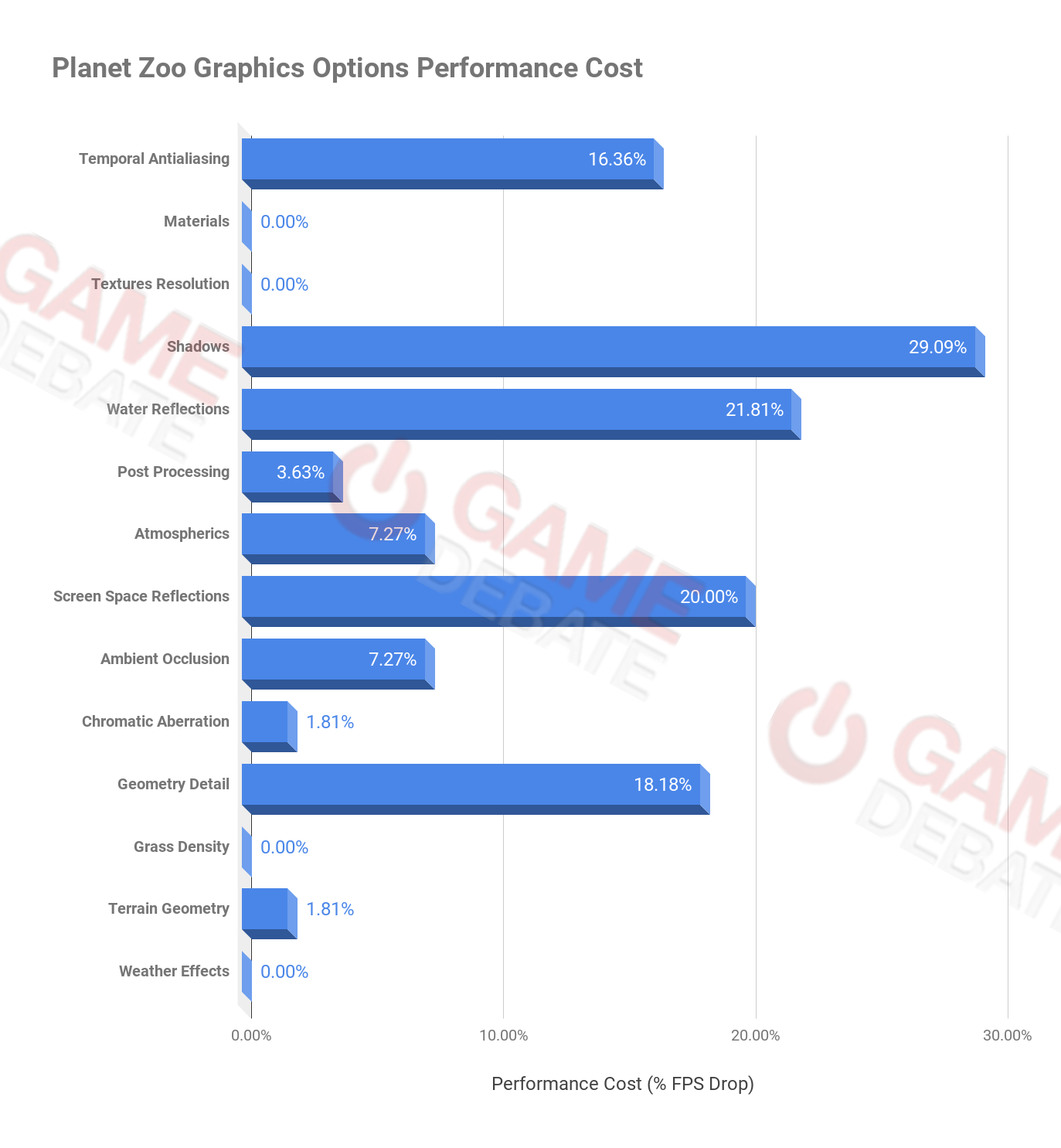 Being a successor of sorts to Planet Coaster, Planet Zoo looks and runs much the same as its theme park brethren. However, Planet Zoo tends to be on a smaller scale. We're dealing with Aardvark exhibits here, rather looping inverted rollercoasters which stretch off into oblivion. Planet Zoo is still very taxing, although it's notably less CPU-heavy than Planet Coaster. That's not saying much though. Planet Coaster is an absolute performance. Planet Zoo less so, but it's still occasionally hitting 100% usage across all cores on an Intel Core i7-5820K @ 4.3 GHz.

A fast CPU and graphics card means faster performance (although there is a frustrating performance ceiling), and there are a number of key graphics settings which can be tweaked to encourage a more stable frame rate.

The most notable graphics settings in Planet Zoo are Temporal AA, Shadows, Water Reflections, Screen Space Reflections, and Geometry Detail, all of which cause double-digit percentage frame rate hits when shifting from Low to Ultra.

This is the only form of antialiasing to be found in Planet zoo and, suffice to say, we recommend you turn it on despite the performance. Temporal Antialiasing, or TAA, dramatically reduces pixelated edges, or 'jaggies'. There is a half-step setting which uses upscaling. It's a nice middle ground but it's noticeably lower quality than native TAA.

Now this one took us quite a while to figure out but it's actually quite an important one. Materials affects the quality of the various material surfaces in Planet Zoo. It is very much distinct from Textures Resolution though, in that we're dealing with things a lion's fur, or a chameleon's leathery skin. Taking the top-down management view you won't really see the effect of this graphics setting, but zoom right on in to your menagerie of animals and this graphics setting can make a big difference to Planet Zoo's visual quality without a noticeable FPS hit.

This quite simply affects the resolution of textures rendered in Planet Zoo. This graphics setting is pretty much solely dependent on the available VRAM on your graphics card. Provided you have enough, there will be no performance impact. Dial this one as high as you can go.

Shadows is probably the graphics option which has the single biggest impact on visual quality in Planet Zoo but it's also the biggest performance hit. Tread carefully with this one then, as pretty much every individual object has a shadow rendered. Ultra feels like a needless performance compared to High or Medium, so it's best to settle somewhere in the middle for optimal frame rates in Planet Zoo.

We've opted for a priority score of 3 for Water Reflections quite simply because Medium is all that's really necessary unless you want to minutely compare the differences. Much like Shadows, Water Reflections are a huge performance hit on Ultra. The more water you have in your zoo, the greater the FPS drain.

It's quite difficult to actually discern much visual difference from Atmospherics, particularly when considering the performance hit. It's supposed to add fog and other such atmospheric effects to backgrounds, although it's almost certainly not worth a 7% hit to frame rates.

Ordinarily, Screen Space Reflections can add a very nice extra layer of visual quality (see Prey). In Planet Zoo though, we can take it or leave it. Typically, SSR is used for accurate rendering of distorted reflections in surfaces. It's not massively noticeable in Planet Zoo unless you're really keen to zoom in your zoom to take screenshots and whatnot.

As with SSR, Ambient Occlusion has a much smaller effect than we typically see in most titles. With nearly every object already casting its own shadow, AO is reduced to slightly enhanced definition on the edges of objects in Planet Zoo.

We don't know how or why Chromatic Aberration has become a thing but it is, and it's even being given pride of place in Planet Zoo's graphics settings. It basically simulates a broken camera so if you like your game to look like it's working, just switch this one off.

Geometry Detail is a roundabout way of saying Level of Detail (LOD). This graphics setting alters the distance at which higher detailed versions of 3D models are rendered. Set this higher to reduce instances of 'pop-in'. Even on Very High you will be able to notice it but on the Lower settings it can be quite jarring.

You'd think this would be an important graphics setting for a game set entirely in a zoo but you need to zoom in so far to actually see the grass in Planet Zoo that the density is largely an irrelevance. Then again, we couldn't detect any performance hit either so cranking this graphics setting up is a fairly safe option.

We can only really give a shrug of the shoulders on this one. Having played around with it substantially there really is little difference between Low and Very High, at least during general gameplay. This graphics setting should affect the LoD draw distance on terrain geometry, rendering in more detailed environments as zoom in to you zoo. That's in theory, anyway. In practice, we were hard-pressed to tell the difference.

This does exactly what you'd expect it to. Rain, sunshine, snow - all of Planet Zoo's weather effects are handled by this simple setting. We struggled to notice any performance hit while raining so you may as well turn this one up despite the tiny visual impact it makes.

Which do you feel is the most important graphics option? Choose more than one if you want.