Zoo Tycoon fans haven't had much to sing about lately but with Planet Zoo it feels like the return of one of the tycoon greats. A successor to Planet Coaster, although sadly not linked from a gameplay standpoint, Planet Zoo offers players the chance to oversee there very own zoo paradise.

Gawp at wonder at a spider in a tank. Laugh at the fat seals. Hope it's feeding time down at the lion enclosure. Planet Zoo provides the toolkit and then it's down to you to build the zoo of your dreams. It's impressive stuff, in truth, although it also happens to be a bit of a performance hog as well.

We've already extensively covered Planet Zoo's Most Important Graphics Options and now it's time to take a look at overall performance with our GPU benchmark tests.

We've tested Planet Zoo with both a AMD Radeon R7 370, which comes in slightly below the minimum spec Radeon R9 270X, as well as further test with a mid to high-end GeForce RTX 2060.

These benchmark tests were run in a medium-sized zoo, zooming in and out, panning the camera around, and generally trying to stress the performance as much as possible. 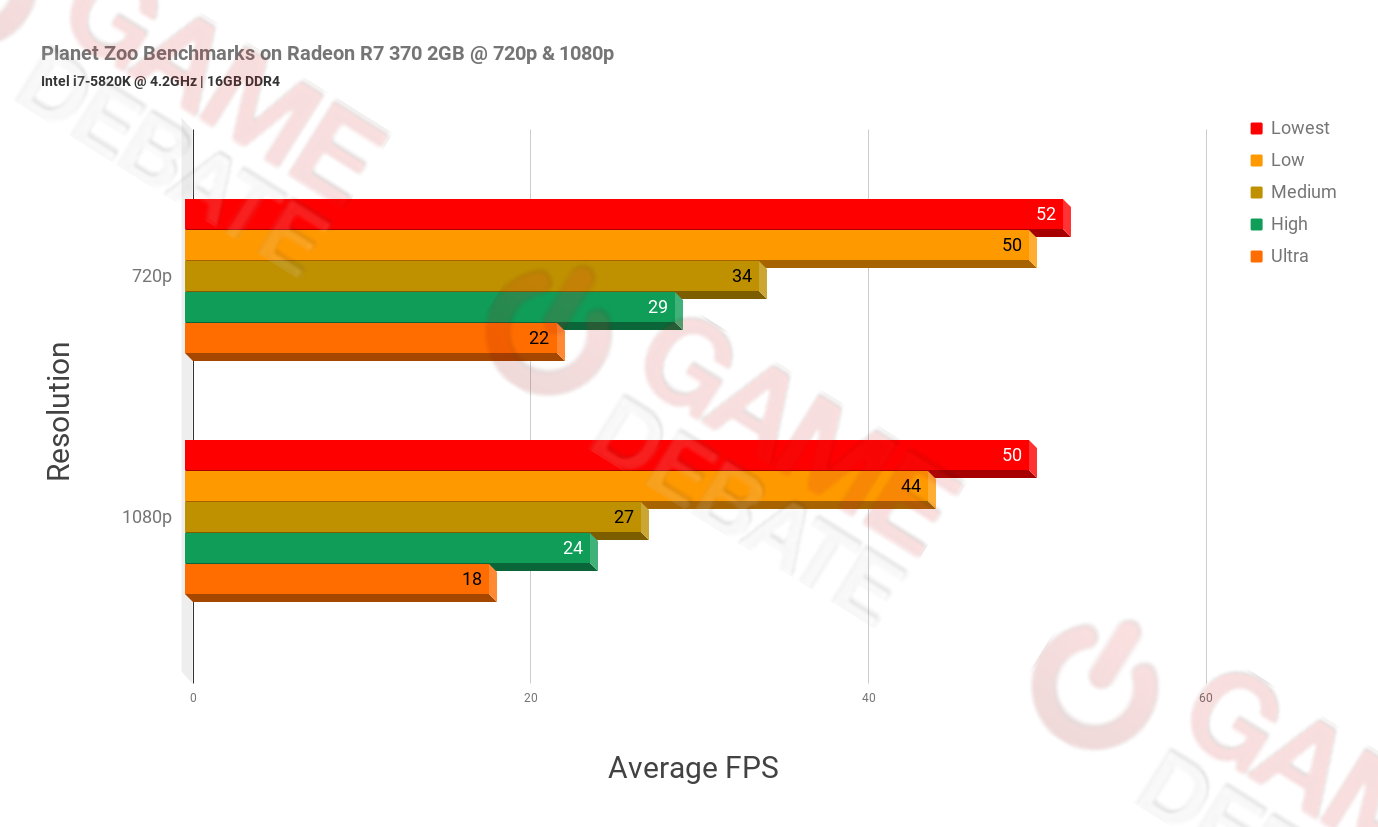 While the Radeon R7 370 2GB does understandably struggle a little to run Planet Zoo, it's nevertheless still perfectly capable of playable frame rates if you're happy dial some settings down. We'd probably aim for a locked 30 as your target minimum, although to be honest it's still totally playable even with frames in the high teens. Not ideal, but playable.

We did immediately notice a contraction in the benchmark results from Lowest/Low tests at both 720p and 1080p which set alarm bells ringing though. There's something else at play here, but more on that later. 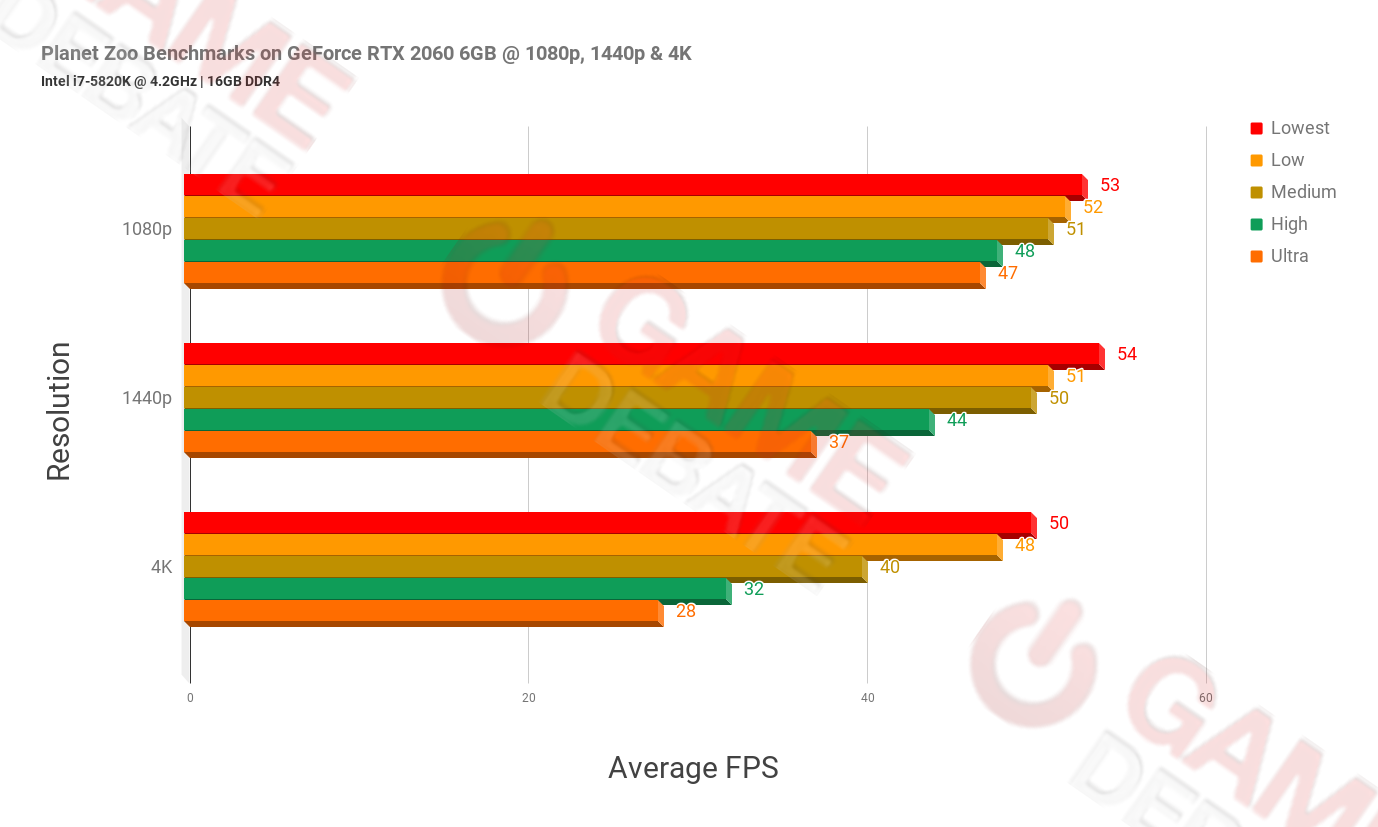 With the Nvidia GeForce RTX 2060 6GB PNY XLR8 OC, we begin to see where Planet Zoo's problems lie. This isn't a GPU issue, it's a CPU one. The GeForce RTX 2060 hits 47 FPS on Ultra/1080p, rising to just 53 FPS on Lowest/1080p. It's being held back, plain and simple, which means we can't actually hit 60 frames per second in Planet Zoo with this particular configuration.

As we shift up the resolutions, so too does the bottleneck shift from the CPU to the GPU, and the GeForce RTX 2060 really begins to be put to the test.

The bottom line, though, is that Planet Zoo will gladly guzzle down your processor's resources. Our tests were performed with a 6-core Intel Core i7-5820K 6-Core 3.3GHz overclocked to 4.2GHz. It nudges up close to 100% usage across all 12 threads with alarming regularity. This is cramping the frame rates we'd hope to see from the GeForce RTX 2060. You'll have to excuse the slightly fuzzy picture, it's been a mangled along the way for some reason. 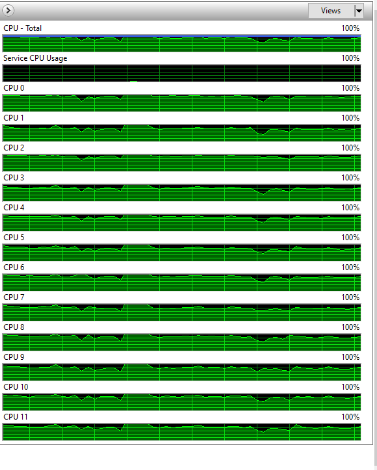 Fortunately, being a fairy slow-paced management game, Planet Zoo is still absolutely playable at 1080p/Ultra with an average of 47 FPS. There aren't any noticeable dips or stutters and the sedate nature of managing a zoo means a sub-60 frame rate doesn't feel detrimental to the experience.