Yesterday's fight was what I like to call squeaky bum time. Star Wars: Jedi - Fallen Order and Sekiro: Shadows Die Twice traded punches for hours on end. Ultimately, there was just a handful in it and Respawn's Star Wars game walked out the victor. Just.

And now to decide what game is going to face it in the semi-finals. Two sci-fi shooters are lumbering into the ring. The Outer Worlds is the fresh faced newcomer, Obsidian's answer to Fallout. Small and perfectly formed, The Outer Worlds has its sights set on being the featherweight RPG champion of the woooooorld. Then there's the juggernaut. The grandaddy of looter shooters. The box of magic tricks that is Borderlands 3. Randy Pitchford has been busy doing his best to try and ensure Borderlands 3 failed but has it worked? There's only one way to find out.

Each day at 17:00 GMT two titles will battle each other. Whichever title receives the most votes in the poll wins, and will then go through to the next round. 12 games in total will be battling away, and the first six rounds will took place from Monday through until Saturday, one battle per day. The six games that win will make it through to the semi-finals, where three further 1v1 fights will take place. The winners of these three battles will then make it to the three-way final to decide the ultimate game this Christmas.

On the one hand, we have the return of Obsidian. Now cradled under the wing of Microsoft, Obsidian has achieved its biggest success in a long while with The Outer Worlds. It may have reviewed lower than either of the Pillars of Eternity games but The Outer Worlds certainly has more mainstream appeal. it's a much smaller scale, focused take on the Bethesda RPG, with all the pros and cons you'd expect this to entail. It's a jack-of-all-trades but will it be enough to deliver a knockout punch to its loud, in your face competitor?

Borderlands 3 certainly has a lot of bark, although it remains to be seen whether it has any bite. Gearbox's co-op looter shooter is bigger and better than what's come before, offering heaps of planets to explore, a comprehensive end-game to get stuck into, and some really eye-catching visuals. For those of a certain type it's also quite the rib tickler, scooping up the Funniest Game of the Year at the Global Game Awards 2019.

With The Outer Worlds and Borderlands 3 we've go two contenders which share many of the same ideals, although they end up being massively different games. Which one is going to be capable of delivering the knockout punch which sees it through to the semi-finals though? Ding, ding, ding. 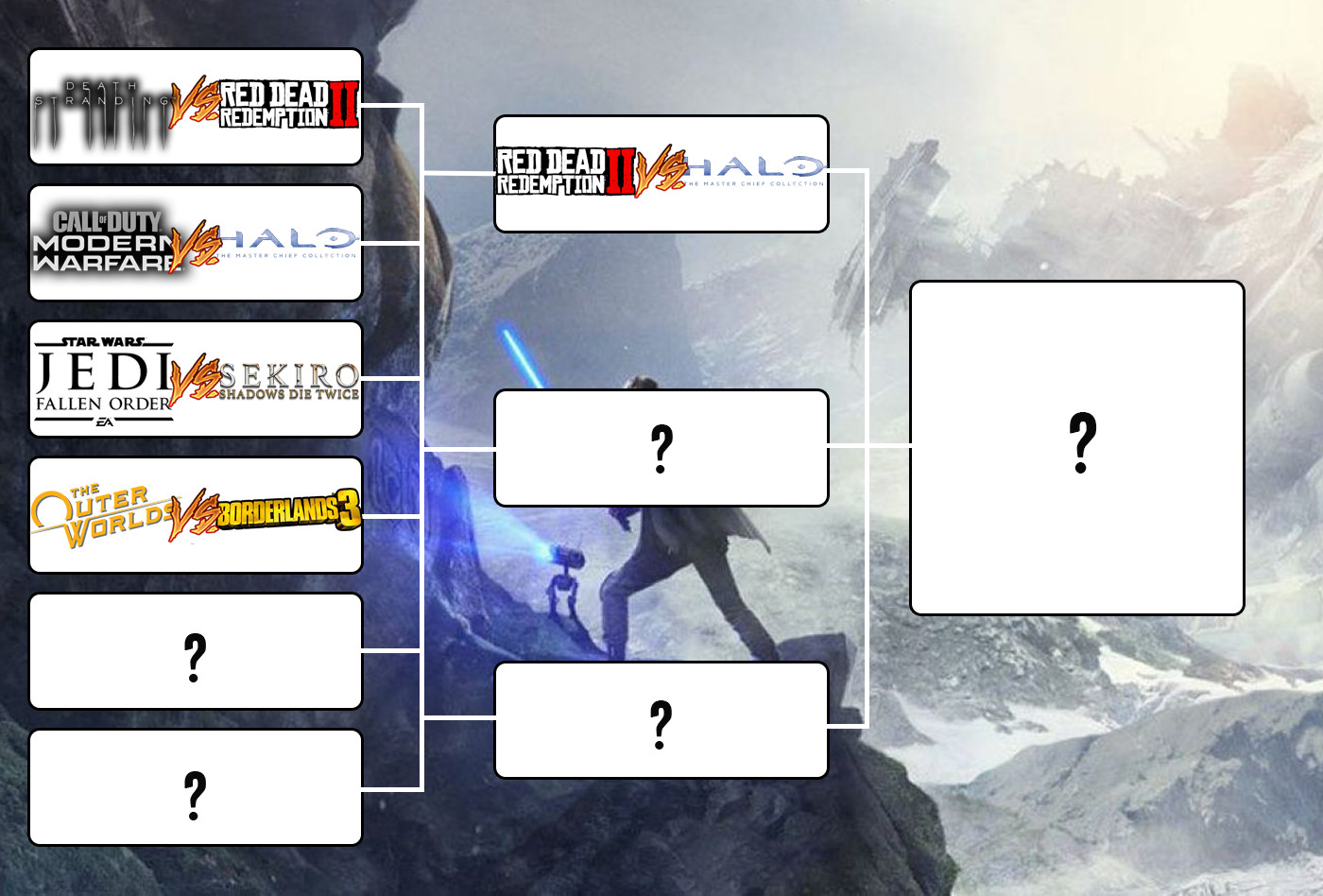 Get voting below for your winner, and remember to check back tomorrow for Day Five of the 12 Games of Christmas, where two more titles will battle it out to earn a place in the next round. The winner of today's competition will face the winner of yesterday's competition in the semi-final on 16th December!

why did Rage 2 fail?
its good game in my opinion on par with outer worlds

Is not a bad game it just failed as game both in sales and in shifting the fate of the brand, from the absolute below average of the first. At least this time the game is shorter than the first one, took me 9 hours, meaning that is a lot less boring, but is very far from the masterpiece that was needed to revive the "saga". When you play Yakuza 0, Nier, Destiny, the Witcher or TOW, you want to play again to know if you missed something, with rage i did not.

Outer Worlds is a genius game without a doubt, but I personally enjoyed BL3 more, and it was my first BL.
Vote goes for the latter, despite Lilith, Tannis, and of course, Ava (and Epic somewhat)

I would go for OW just because Borderlands 3 has Ava!

I would go with Outer Worlds, because they did exactly what gamer would want most companies to do, make a game with no bulls*** attached. And it really shows it. Amazing game in style we all missed and Bethesda decided to not capitalize on because, as all AAA developers these days, they were too busy making live services.Borderlands 3 is great too,but on the other hand it is just more Borderlands.

And while as Borderlands always were, it is great co-op experience, I got to say, it kind of fails to stand out for me. It is more like evolutionary step with just bigger and some other tweaks. Still great for anyone who wanted more Borderlands. But I do feel that franchise might at some point get to the point where better and bigger version of same just won't be enough.

Yes! It's very refreshing when a AAA developer actually goes against the latest cash-grab trends that other AAA developers try to do. So that's a bonus!

Outer Worlds. I played the first 2 Borderlands (minus the pre-sequel), I just can't get into them...

Outer Worlds for sure.

Easiest choice up untill now, The Outer Worlds is innovative, has a gorgeous art style, your choices actually matter and it is a true passion project. As for BL3, if it is like the other ones, it's good, but not very fun without friends.

I personally enjoy BL solo much more than co-op, and many share the same view. And I do have many online friends who play it.

I agree JMG998. I've played all the Borderlands games about 95% solo, mainly because of the co-opatition style of play. I do much prefer how it works or how it can work in Borderlands 3, where you get your own loot and the fact that I can play with a level 5 and it scales.

Hey moderators, the link above to round 3 is linking to round 2.