This time last year it would've seemed utterly impossible but the (ex) PS4 exclusive Detroit: Become Human is now out on PC. Quantic Dream's adventure game portrays the tale of three AI androids who believe themselves sentient, fighting for their to be considered human. It was a big budget, tentpole PS4 release back in 2018 and now it's back and looking better than ever on PC.

It's really quite trippy to see that familiar "Sony Interactive Entertainment Presents" black screen pop up on the PC release, let me tell you. There's a lot to say about Detroit beyond the technical perspective but its most apparent strength is its incredible visuals. It's a fantastic visual feast, albeit with a few large caveats (more on that later) but what does it all mean for performance? Let's find out.

Folks aren't going to be pleased with some of these settings, especially Depth of Field. When I say it is an intense effect, that is putting it tremendously lightly. Only the objects without a few feet of the player are crisp and clear, everything else is out of focus. There is no in-game option to turn off DoF entirely, all you can do is choose the level of quality. There may be a workaround but nothing I've discovered just yet.

The number of options available in D:BH is actually fairly small, and most have little to no impact on visual quality. Shadows, Textures, Ambient Occlusion and Volumetric Lighting are all going to be things you'll want to crank but, aside from a few specific instances, Low looks pretty comparable to Ultra.

One final thing to point out is that Detroit: Become Human is the latest in a growing list of games which opts to use the Vulkan graphics API rather than DirectX 12.

These benchmarks were performed during what is roughly the third chapter of Detroit: Become Human. It's one of the largest, most graphically complex environments found in the entire game with taxing reflections, plenty of NPCs, and a fairly long draw distance. We took average FPS results across multiple runs at 1080p, 1440p, and 4K screen resolutions, as well testing all four graphics presets - Low, Medium, High and Ultra. 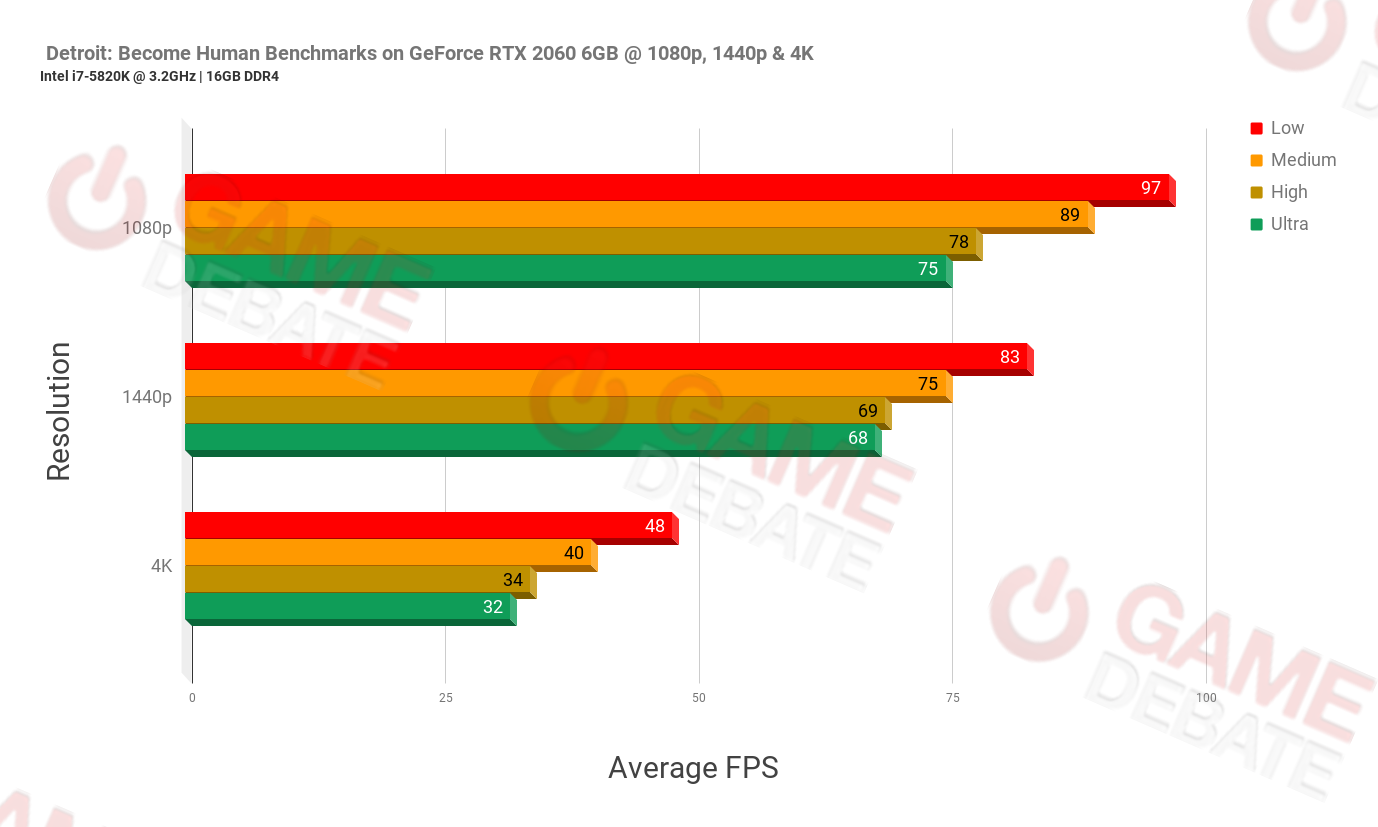 Overall, we see generally good performance from the GeForce RTX 2060. Ideally situated as either a high refresh rate 1080p video card or a 1440p/60FPs solution, it manages to hit these targets well. The frame rate at 1440p/Ultra did dip below 60FPS on occasion, sometimes veering into the 40s but, overall, it help up consistent performance. A big shout out to 4K/High as well. Lock this at 30FPS and it provides a consistently excellent experience in Detroit, both visually and gameplay, which is very slow-paced.

Sadly, hitching can be prevalent, at least on my system. For the most part it's fine but in some of the larger areas you explore there can be some dropped frames. The FPS was locked to 60 on 1080p/Ultra, for example, but it didn't feel like it at times. I suspect this is something to do with the CPU usage, which is absolutely maxed out at all times. I'm using an Intel Core i7-5820K 12C/6T processor overclocked to 4.2GHz and Detroit absolutely guzzled it all down. It's quite difficult to see exactly why this would be the case, it doesn't follow the pattern for a typical CPU-bound title. It's slow-paced and there's not a lot going on in terms of gameplay systems and AI. I'd have thought it would've come down to GPU firepower but the GeForce RTX 2060 6GB was largely underutilised. 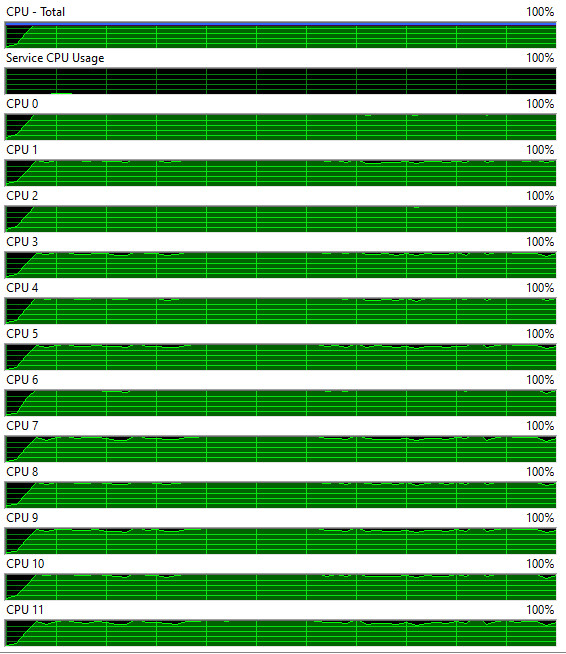 It's the end of the world but it can be a little distracting when it does happen. Detroit: Become Human's frame rate is typically very solid which only serves to highlight the moments where it dips.

My advice here would certainly be to consider capping the frame rate. You can only unlock the FPS by tweaking the config file anyway, otherwise it's capped at either 30FPS or 60FPS. In all honesty, to avoid the hitching, I would play Detroit: Become Human at 30 frames per second. It's so slow-paced that a high frame rate doesn't really matter whatsoever, although I know some folks may turn their nose up at a, erm, 'cinematic' frame rate.

I've been playing this for the last three nights in a row, and it really is beautiful graphically - sometimes even jaw-droppingly so. That said, I am surprised the article does not mention the two performance issues I am experiencing, both of which are extremely frustrating and notable: Extremely, extremely long load times, even installed on a mid-range SSD, and broken V-Sync (really obvious and actually annoying screen tearing). I'm playing on a PC above rec'd specs: Ryzen 5 x1600 @ 3.2ghz, MSI Radeon 580x 8GB, 8GB DDR4 RAM, WD Blue SSD. I'm still enjoying it, but these two issue are pretty off-putting at times. EDIT to add that I am playing at 1080p resolution @ 60hz on a 55" Samsung TV.

Denuvo doing its job with the cpu on 100%... If the game needed that much cpu power it could not run on that horrible console cpu...

the current gen consoles have very weak cpus, there is absolutely no reason why a PC port should use 100% of 12 threads.

any chance on getting a stable 60fps on 1080p with my specs?

on medium low maybe, no idea

playerd this one on the ps4, as well as beyond 2 souls on pc via ps now, and played heavy rain on the ps3.
All 3 are amazing games, that rely heavyly on storytelling rather then on gameplay.
I strongly advice eryone that likes good and extensive stories to play these games.. Its a unique thing that these 3 games came to the pc, so grab your chance while you can!

They're definitely interesting games, but good and extensive stories? I don't know man. Cage has 0 subtlety and the writing is really baaaaad. They're good games to laugh at, but that's about it.