And then there were three. Disco Elysium cowered and fled like a washed up cop praying for early retirement. Mr X. rocked up and ripped its head off, leaving Resident Evil 2 as the final game to limber up for the grand finale.

Claire and Leon will be joining Arthur Morgan and Cal somebody or other as Resident Evil 2 Remake, Red Dead Redemption 2 and Star Wars: Jedi - Fallen Order step into the colosseum for one final bone-crunching encounter.

Each day at 17:00 GMT, two titles have battled one another. Whichever title received the most votes in the poll won and then went through to the next round. 12 games in total have battled away, whittled down over the course of nine days to just three.

Now we're talking. Red Dead Redemption 2 is back for another stab at the final thanks to the recent PC release. It was struck down by Thor's almighty hammer in the final, slipping into second place behind God of War. Perhaps 2019 is finally Red Dead 2's year?

Arthur Morgan faces stuff competition, with Capcom offering up one of the greatest remakes of all time with Resident Evil 2, while Star Wars games are finally good again courtesy of Star Wars: Jedi - Fallen Order. It turns out if EA ever has a problem they can just give it to your Respawn and you can be damn sure they'll sort if out.

Three humongous single-player, story-driven games, but only one may be crowned champion. RDR2, Jedi Fallen Order and RE2 Remake are heading into the cage and only one will be left breathing after this AAA showdown. 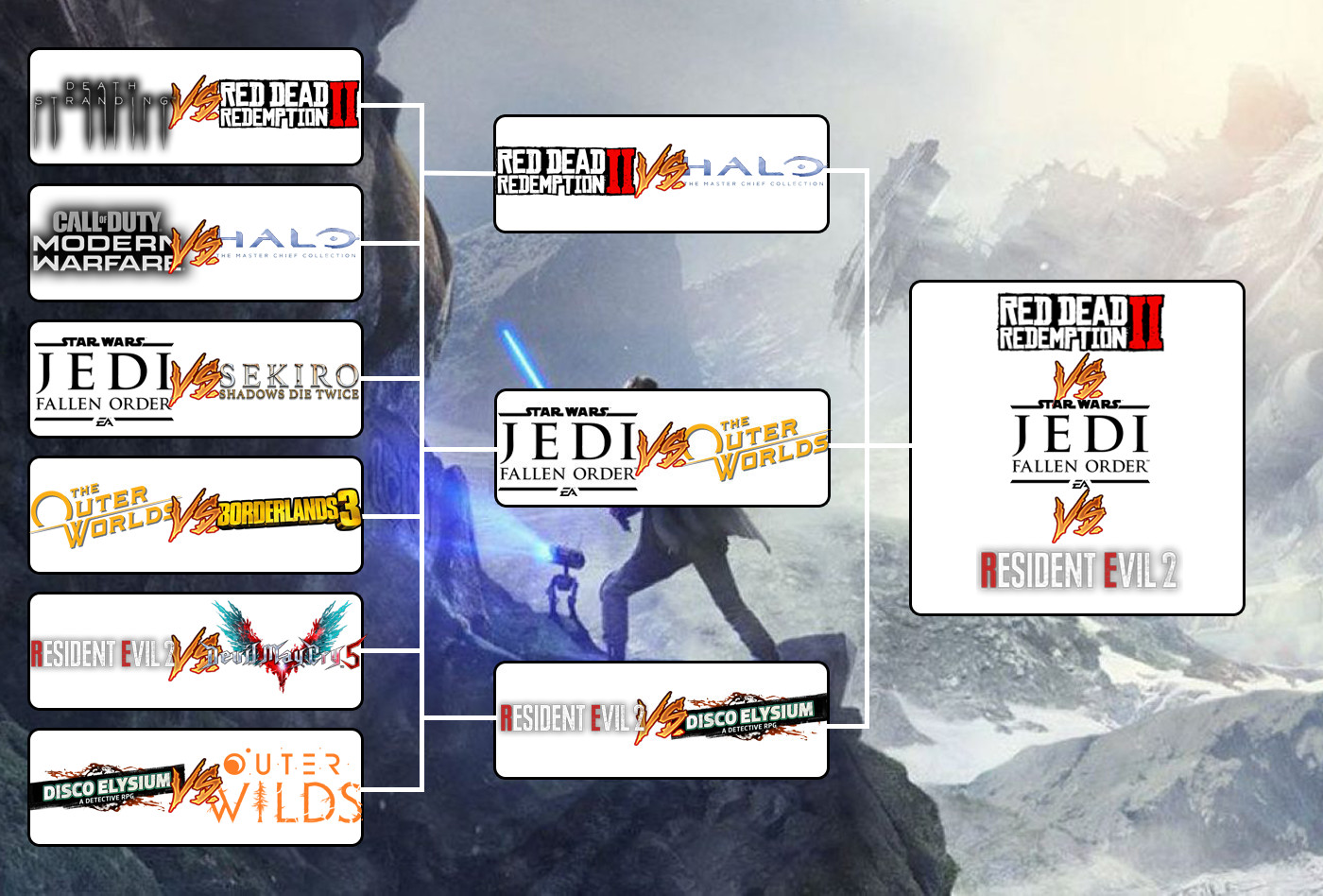 Get voting below for your winner, and remember to check back tomorrow for big winner announcement from the Grand Final of the 12 Games of Christmas 2019.

So this was about what game would people like to receive for Christmas? No wonder the most expensive games ended here.

didn't you guys notice that RDR2 has the big picture than FO and RE2?

That's so it looks right on the front page

If its about being a better game then RDR2, if its about the game I would want for Xmas .. (something my PC can handle) then FO

Stupid question maybe: why is the question what youd rather receive for xmas? So this isnt a vote for the best game?

Nope, I found out that too. In that context the games and votes make perfect sense.

Guessed 2/3 of the games xd
Star wars gets my vote.

For me, it is Resident Evil 2. While RDR2 is great, it also was buggy mess and has bad multiplayer monetization. And while Fallen Order is step in the right direction for EA, they didn't really create anything new, but rather just did basic one should expect of them, making game with no bulls*** for gamers, by combining what worked for other games in SW franchise. So RE21 it is.

A remake and a PC re-release. Guess I'll vote for the most original.

which is?
i mean none of them are

FO and RDR2 are neither remakes, both are original games, neither they are PC re-releases, since it would indicate there was already release on PC. And while RDR2 as game was re-released for PC, it was not PC re-release since that would indicate second release to PC. Which only leaves Resident Evil 2.

they are not remakes but they are neither original

You're just stuck on the wording. I meant it's a game from last year.

Such a shame that the most uninteresting games got the highest of spots. I can't bother to even vote on this one. I guess RE2 is the best of these ones, it's the only one that's not boring or mediocre.

There's no competition for RDR2

Jedi is the best in terms of gameplay.RDR2 is great storywise but runs like actual crap.RE2 is somewhere in the middle.

Picked up RDR 2 on PC and it feels as good as it did last year. Time flies by so fast, as it's so immersive and detailed. Even starting to get into Online too. I will vote for it, though I admit the other two games are nothing short of amazing.

Tough one but Resident Evil 2 was something else for me

I knew what I was going to pick before the article was even posted.

Star Wars, without a 2nd thought.