Around a couple of months ago there were some significant rumours pointing towards the 2020 Assassin’s Creed game being a Viking-themed RPG dubbed Assassins Creed: Ragnarok. Well, Amazon just went and poured a whole lot of fuel onto that particular fire by putting up store pages for, you guessed it, AC Ragnarok.

Ordinarily, we’d chalk this up as a fairly throwaway rumour. Placeholder store pages go up all the time and it’s not necessarily a signifier that the likes of Amazon aren’t just listening to the same sorts of rumours that we are. But, this one goes a little further because it includes no fewer than three different editions of Assassin’s Creed Ragnarok. You’ve got the Standard version, Mjolnir edition and the Valhalla special edition.

The listings for AC Ragnarok appeared on both Amazon Germany and the Italian GameStop websites, although both were subsequently pulled down very quickly indeed. 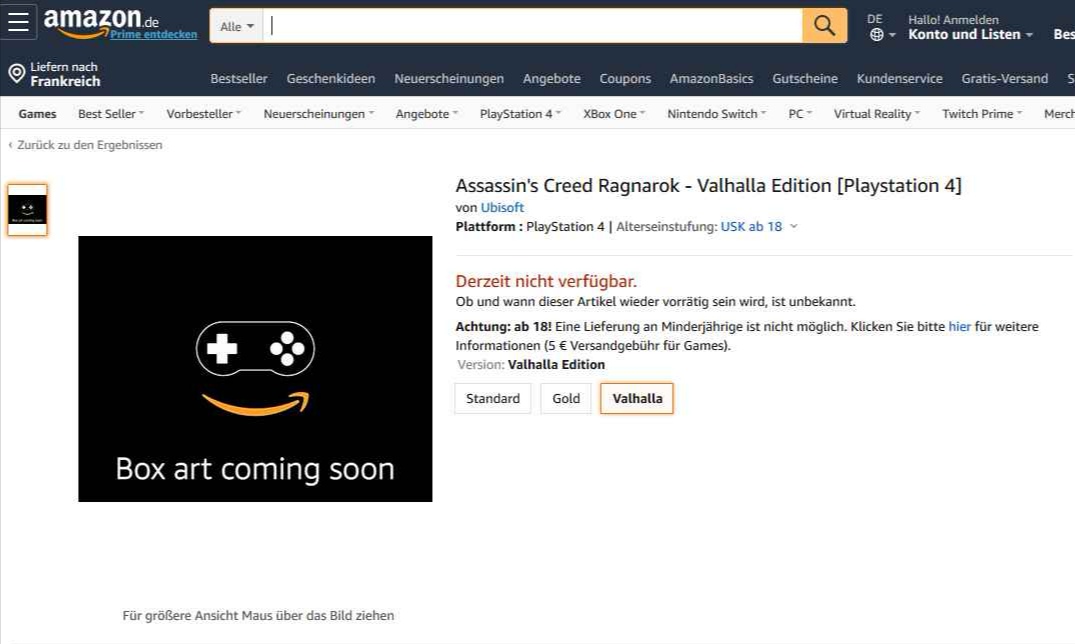 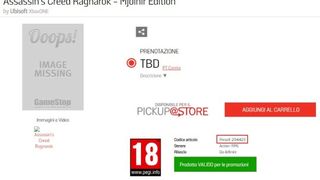 Reading between the lines here, we’d guess a number of storefronts have been briefed on the existence of this game this week. There’s probably a distinct possibility this all ties into a console reveal, which all major storefronts will of course need to be ready for. Other rumours have suggested a PlayStation 5 event is scheduled for February and Assassin’s Creed Ragnarok will be one of the showcase titles. These rumours also point toward a September 29th launch for AC Ragnarok, although that’s a little specific for our tastes.

By now you can probably feel safe staking a considerable sum on the next Assassin’s Creed being a Viking title. There have been leaks for years now, we heard whispers of it before AC Odyssey even launched, and it’s probably going to be an ambitious cross-gen title. In terms of the rest of the rumours surrounding the game, it’s reportedly set across the entirety of Northern Europe and includes Britain, Scandinavia and the Slavic nations. We’re expecting berserker skills, brutal axe-based combat and plenty of water-based exploration.

For now though, all we can do is wait. The last couple of Assassin’s Creed games have been revealed just prior to E3 so a February reveal would break from tradition somewhat. Keep your eyes peeled but we’ll bring you updates just as soon as we hear anything.

A shame it's not roman empire, still, you'll probably end up fighting them anyway! FINALLY, i can barely wait!

Why is the story of assassin's creed so difficult to follow?!

Because they decided to throw away the initial plans and expand the franchise endlessly as it was selling so good.

I find it's better to just completely ignore the overarching story and just take them as sort of anthology titles. I absolutely hate when any of the games cut to the modern day, ruins the immersion completely.

Scandinavia? If there isn't at least one "perkele" in the dialogue I will be disappointed.

I know, just a joke...I actually hate it when they force that stuff. That random Finn in The New Colossus still gives me nightmares... "Kapteeni Blazkowiczi"...ugh...

Ok if you know that, everything's fine, but many people think finnish is related to these nordic languages but its far from related. :D

Someone took notice of god of wars success. I wonder will the next assassins creed will be in japan after ghost of tsushima blows up.

Ubisoft did say that AC will never be set on Japan. Maybe they will change their minds? There are just so many interesting setting Ubisoft can stick AC in.

Why the hell not Japan has a long history of conflict and most of it isnt known in the west...its almost stupid not to make one there.

Pretty sure they said that way back when AC2 was being made and Tenchu was still around, so they probably thought it might be too similar at the time.

Not like Tenchu owns the copyright on Japan´s setting. That just sounds like a lazy excuse pretty sure there have been games in old london or any other setting they used.

I doubt it has anything to do with GoW and more to do with the fact that the majority of players that enjoyed Odyssey liked the added mythological elements so now if they have the likes of Fenrir the giant wolf to battle against in Ragnarok it might be more acceptable to the players rather than sticking just to the historical aspects of the era.

Knowing that we have been given hints about vikings for some time now. Would I be too optimistic to expect a very good game. Too bad I am not a fan of vikings.

I like vikings but too bad that the last few Assassins Creed game sucked.

I totally agree, except for AC Origins which it's my second favorite of the series (after Black Flag) all of their recent games have been extremely bad, Odyssey in particular i consider it to be the worst.

But given how it's made by the same director from Black Flag and Origins (Ashraf Ismail) it might turn out to be an amazing game after all. I only hope this time they put more emphasis on the story and characters, Siri has more personality than ALexios and Kassandra combined.

Woah, Ashraf is working on the next AC game?! I thought he had other stuff going on

Why do you hate Odyssey if you love Origins? They're very similar.

We're not comparing graphics or game mechanics here, we are mainly saying that origins had a superior story with a superior protagonist unlike odyssey with its robotic dialogues, also origins had a linear system with added hints of rpg, with odyssey it turned into a full blown rpg with magical blades and creatures, you remind me of those who kept saying why you like syndicate and hate unity they're the same

@ZeyadBB That's your opinion. The game sold well and it has great reviews so you're in the minority.

@ExtremyMan I played the game and i enjoyed it like any rpg but not as an assassins creed game for sure, some of my favorite games had terrible reviews but that doesnt bother me and it so doesnt bother me when odyssey has high reviews i still think it doesnt deserve the AC title

@Csongor1996 The only similarities they have are the engine, and that's about it. The characters are as blunt as possible, the "story" is very loose and compared to Origins it's a massive step back. The gameplay is great for and RPG but it it definitely doesn't fit the AC M.O.