Epic has revealed the Epic Games Store has amassed more than 108 million PC customers since its launch in late 2018. The controversial digital storefront has seen $680m in revenue, including $251 million spent by players on third-party PC games on the Epic Games Store.

Breaking down the numbers somewhat, it doesn’t make for massively impressive reading in terms of profits. Epic Games being a privately owned company it’s doubtful we’ll ever get the full picture, of course, but $251 million in revenue from third-party games is sizeable yet nowhere near game changing at this stage. That’s the equivalent of 4.2 million $60 games sold. With exclusive games like World War Z, Borderlands 3, Metro: Exodus and Control on the service, you’d expect this figure to be higher.

Then there’s Epic’s revenue split to take into account. The EGS runs on an 88/12 split between the developer and the storefront. That means on store revenue of $251 million, Epic earned around $30.1 million. Factor in all of the deals Epic will have made for exclusives, including the likelihood of an improved share of earnings, and these profits would rapidly be stripped away. We know, for example, that Epic paid $10.4 million for Control’s year-long Epic Games Store exclusivity alone. 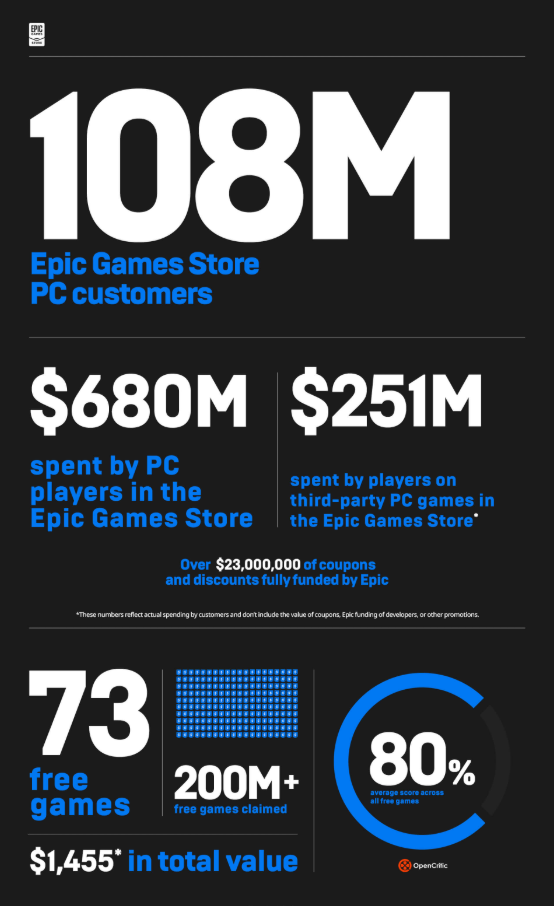 That’s not to say that Epic isn’t feeling flush right now though. A grand total of $680 million was spent by PC players in the Epic Games Stores. Deduct the $251m and we’re looking at around $429 million spent by PC Fortnite players, of which 100% goes into Epic’s pockets. That means Fortnite earned 71% more revenue than every other Epic Store title combined, and that profits on earnings from Fortnite on PC were 1325% higher (estimated) than the 12% split from $251 million third-party revenue. Cash cow.

A whole ton of money is being thrown into the Epic Games Store, which is largely a win for the end user aside from the divisive stance on timed exclusives. To that end, Epic has announced it will be continuing its free weekly game program through the whole of 2020. It means at least 52 extra free games will be added, bringing the total up to over 120 free games over two years. Well that's one to save a bucketload of money.

Just an update on how bad EGS really did: GOG actually made around $34 million in 2018 from games sold while EGS only made $30.1 million in 2019. This is obviously excluding all of the Fortnite stuff and only showing the third party sales for EGS.

Signed up for the free games. Though none have been notable, either a useless game, not my thing, or already owned.
I did buy my first and only game with epic: division 2. It was $15 and they had a $10 coupon.
Financially, things looking good for epic so far. They can keep the ball rolling for a while. Whether they 'win' is something we'll just have to wait for. Will be entertaining :)

The only reason I signed up with Epic was the free games, and the that I got both Borderland 3 and The Outer Worlds for free with the purchase of my 3900x. It gets the Origin treatment, as it is only up and working when I play a particular game. Other then that it isn't used.

Don't worry about Epic Games. They got that Tencent money

And all other articles I read about this are like "EPIC STORE: HATED BUT SUPER SUCESSFUL!!" do they even think about those numbers, or do they just see "high numbers = Gud"? Epic takes a MAXIMUM of 12% per game, if you take 12% from the 251M, we're at a best case of 30M in actual gains. Control was 10M, I expect Metro exodus to have been significantly more even plus there were many many more exclisves, they paid the discounts from their sale to the devs themselves, offer loads of free games and people think it's a success? Yeah only because of fartnite.

Yeah I was surprised to see so many sites report the data uncritically. It doesn't take much to break down the figures and realise this revenue ain't all that. I imagine if we had the total revenue from Steam game sales for 2019 it would be a frightening figure compared to $251m

I guess it is a success in that it's not so bad, although that is a matter of opinion and expectation.
Even without taking fortnite into the equation, it doesnt seem like epic is bleeding money with 3rd party games. Look at other companies trying to establish scale (ie netflix/uber). While they are more successful with penetration, they are absolutely burning through cash.

There can be many inconsistencies in the data. Let me point out a few.
1.Me alone have several accounts on epic. So number of customers is not accurate.

2.Not every discount-coupon was successful. My paypal payment had some problems and therefore my free coupons were applied but the transactions never happened.

3.A lot of coupons must have wasted away cos free games also used that coupon. This was silly.

To me it shows that third party games sold worse than expected and probably made PC the worst platform for each of those games. It also shows that the 12/88 isn't viable if you plan to have features for your users while still making profit to grow a store. Epic earned around $30.1 million, but they would have to give at least some of that earned money to their own engine to keep it growing. It's usually a cut 5% for UE games, but that's probably taken out of the 12% cut. Back to games doing worse on EGS, it's estimated that 4.2 million third party games got sold. I can't find a number for this, but back in July 2019 there was already over 100 games on EGS. That number would probably be over 200 now, meaning 4.2 million copies of those games got sold. The majority of the revenue was made by Borderlands 3 and then Metro Exodus, Control and Red Dead Redemption 2. Borderlands 3 would also most likely still be the worst on PC if you look at actual sales (excluding all the free copies given out with hardware). It should also be assumed that the guaranteed sales deals EGS had are part of the $251 million figure.

If there are 200 games on the store that means average sales of 21,000. Much higher than Steam I should think but also a far more selective library of games. Borderlands 3 was probably the biggest seller but it can't have done all that well... Wonder how well it'll do on Steam

Oh, there's definitely more than 200 now, I just rounded it down to be more fair. The indie games definitely didn't do much to contribute to that total and it was mainly just the top exclusives that did (the guaranteed sales probably helped a bit too). Boneworks sold 100K units and made $3 million in it's first week and that's while it's an indie VR game. It did have a lot of word of mouth, but it's still only a VR games. Borderlands 3 will probably struggle a lot when it gets on Steam, because it looks like the weakest release out of all the AAA games releasing then. So if it releases between March-April then it would have to compete with Ori and the Will of the Wisps, Doom Eternal, Half-Life: Alyx, Resident Evil 3, Final Fantasy VII Remake, Cyberpunk 2077 and Gears Tactics.

"It also shows that the 12/88 isn't viable if you plan to have features for your users while still making profit to grow a store" but the $429,000,000 that was made from first-party games (Fortnite) on the EGS would certainly help improve features. And these figures are for the EG PC only and doesn't include income from PlayStation 4, Nintendo Switch, Android, Xbox One and iOS games.

It could, but I was talking about in general. Fortnite is an anomaly and it's rare that a store gets something like that. EGS has no definite plans anymore to improve their store / client either and all they have now is a vague trello board that they already failed a lot on in the past. A lot of the features are also not implemented properly. Cloud saves breaks a lot and even the World War Z (I Think) developers prepared cheated saves for people who lose their saves. It would be really great for their users if they do improve their store, but I highly doubt that it'll be as good as it needs to be in 2020.