It’s taken over two years but April, Monster Hunter World’s PC content will finally be in sync with the console editions. The content sync was revealed on a new Monster Hunter World: Iceborne Title Update Roadmap, outlining the post-launch content plans for the critically acclaimed expansion.

MonHun World: Iceborne launched on Steam on January 9th, some four months after the PS4 and Xbox One versions. It’s seen Monster Hunter surge back up the Steam charts, hitting a peak of 284,090 concurrent players this week, making it the fourth most popular game on the entirety of Steam.

Clearly the wait didn’t do the sales figures any harm. Monster Hunter World has been a huge success on PC and the franchise is now surely here to stay. Still, the delayed content compared to the console versions has been a blot on its copybook, an issue which will be laid to rest from May 2020 onward.

Over the next few months, Iceborne will be updated with special timed events, a new region, event quests, a doubling of the number of variant monsters and Master Rank versions of the existing monsters. In May the Title Update Sync takes place during the return of a “fan-favourite monster”, while June onward will see new monsters and updates planned. 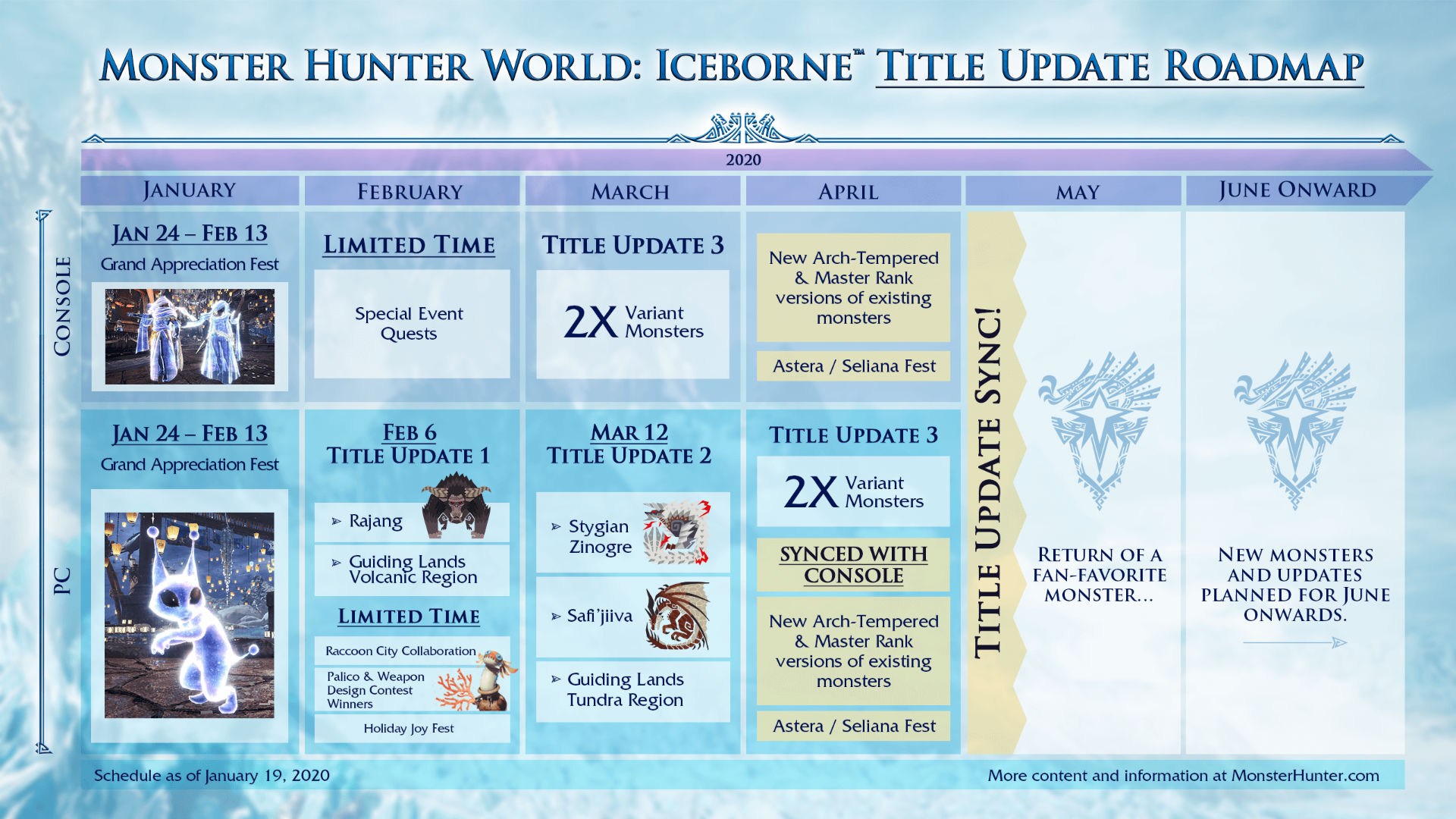 Capcom has been fairly explicit in saying that Iceborne will be the only paid expansion for Monster Hunter World. There are no plans in place whatsoever for another DLC, with producer Ryozo Tsujimoto telling Eurogamer: “This is the only massive expansion we have in mind at the moment, and keep in mind it's not an MMO where we're saying 'here's a five-year roadmap of huge updates', it is still an action game and we've released it, and we've supported it, and then we've released this expansion which is equivalent to the way we've done it before with Master Rank and G-Rank. It's still a single game in our mind, and it isn't like it's a service where it's going to be live for 10 years, so right now our focus is once we get Iceborne out, we want to bring the same level of amazing free post-launch support.”

Monster Hunter World 2 it is then.

And it's only taken them 26 months and 2 delayed, poor PC releases.. It's definitely my favorite game of the past years, and I've been a fan of the series since forever and even bought a 3ds (twice), switch and PS4 for it, but man I feel like they're treating the PC folks like crap.

Such a great game. My most played on Steam by loads.

I'm hoping we get the ability to transfer our console save data to PC when it catches up.

Nice, I hope it will feature cross-play eventually.

Would be dope, but seeing how Sony seems to be very involved in it and all, I doubt it.