Team Red has finally seen fit to flesh out the mid-range of its Radeon RX 5000 series, launching the AMD Radeon RX 5600 XT 6GB in stores worldwide.

AMD reintroduced themselves to the graphics card market last year, by launching the AMD Radeon RX 5700 XT 8GB and AMD Radeon RX 5700 8GB - they offered reasonable competition to their Nvidia counterparts and could boast smooth gameplay up to 1440p. But the 5700, tended to consume much more power than their competition, and weren’t the cheapest cards on the market.

AMD solved this by introducing the AMD Radeon RX 5500 XT 4GB - a slightly downgraded version of the 5700, which still offered great performance on most systems, and was significantly cheaper than its 5700 relative. AMD needed to fill the gap between the 5500 and the 5700 somehow, and in comes the AMD Radeon RX 5600 XT.

Currently being sold for $279, the RX 5600 XT can easily be compared to the Nvidia GeForce GTX 1660 Ti, originally marketed at $269. But, in terms of performance, the 5600 XT definitely comes out on top, keeping neck and neck with Nvidia GeForce RTX 2060 6GB in many benchmarks, forcing a price cut from Nvidia.

You can easily imagine the 5600 XT as being the best parts of 5500 and 5700 melded into one card - all three are built off of the same 7mm rDNA graphics architecture, but they do have significant differences. For example, both the 5600 XT and 5700 have 2,304 stream processors in 32 compute units, which is vastly superior when compared to the 5500’s 1,408 - the three cards have their similarities and shared features, but the 5600 XT stands as a more affordable and effective mid-range graphics card.

And no, the 5600 XT cannot handle ray tracing. Unlike its Nvidia counterparts, which are steaming ahead with ray tracing - something that is becoming more and more common in video games,  - the Radeon RX 5600 XT just doesn’t have the capacity to handle effects such as ray tracing. But, this is something AMD have promised to introduce with their future graphics cards.

An easy way to think of it, is this: If you want a card that will look incredible, be able to run ray tracing etc, you’re better off going with a Nvidia card - perhaps the entry-level raytracing-capable Nvidia GeForce RTX 2060 - but if you’re looking for a card that can improve performance on your system, and ultimately your gaming experience, then the 5600 XT graphics card could be the smarted choice provided you can find a decent deal.

But, enough with the written comparisons, it’s time we look at some actual performance comparisons, in this case, we’ll be comparing the Radeon RX 5600 XT to its closest rivals, the Nvidia GeForce RTX 2060 and the AMD Radeon RX 5700, just to see what differences can be seen between the three different video cards. 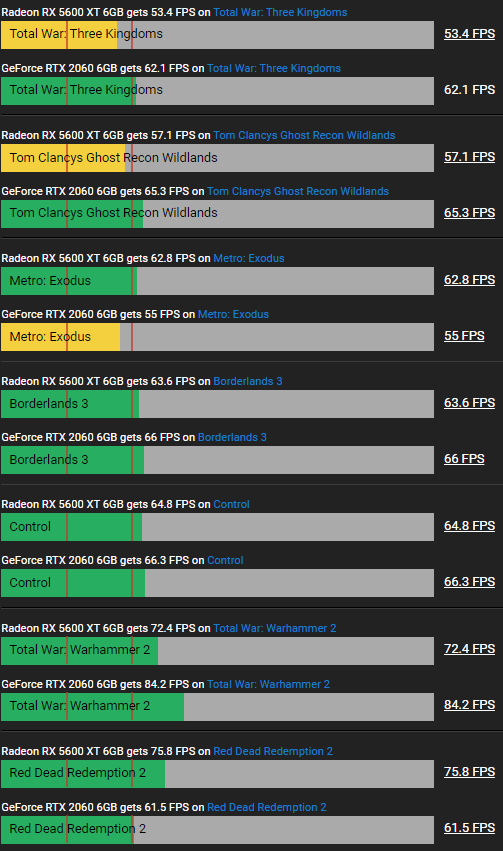 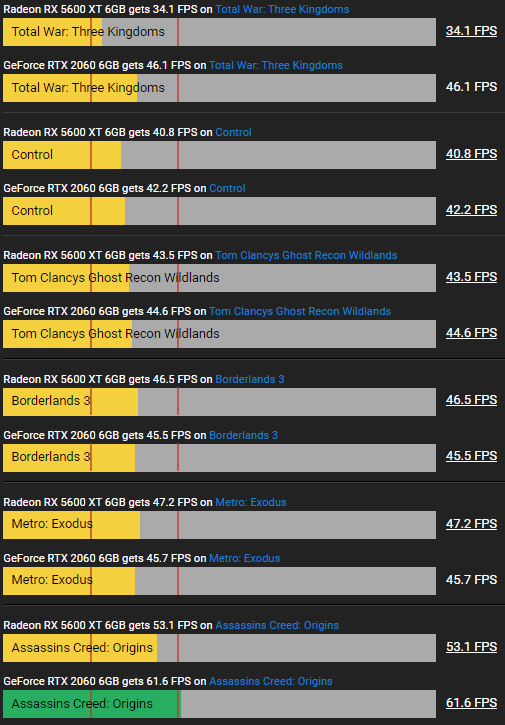 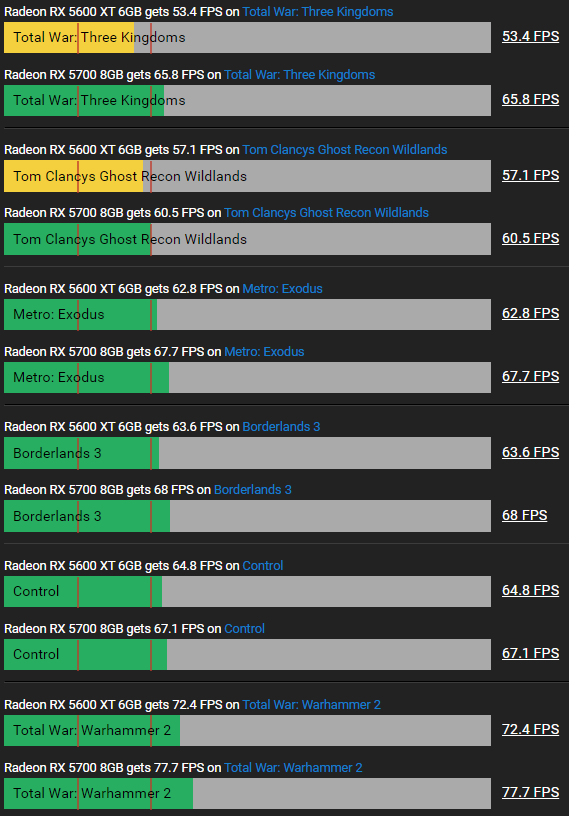 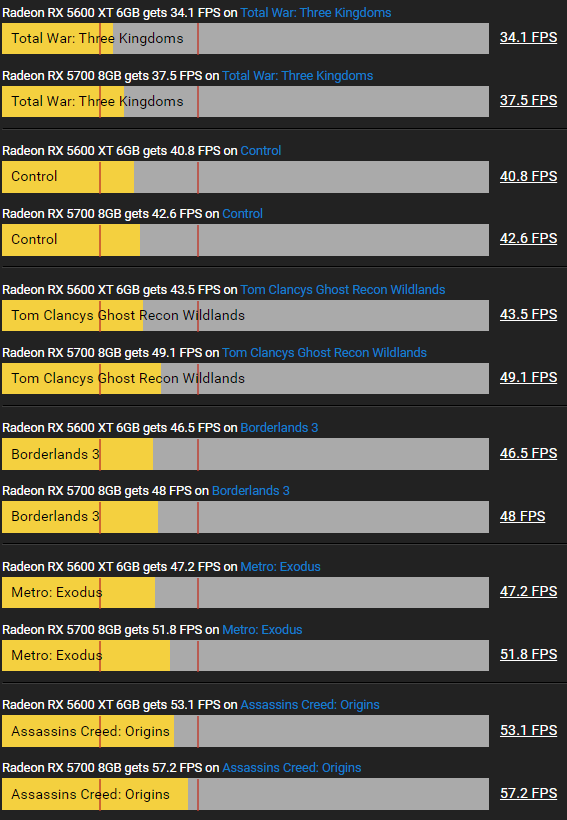 Unsurprisingly, there are very few differences between the AMD Radeon RX 5600 and the Nvidia RTX 2060 - both can handle themselves fairly reasonable at 1080p, and have decent FPS when played at 1440p. And this could be said the same about the 5600 and the 5700 - while the 5600 understandably performs slightly worse than the 5700, it isn’t by much, making the 5600 a reasonable substitute for the 5700 if you're a budget-conscious gamer. 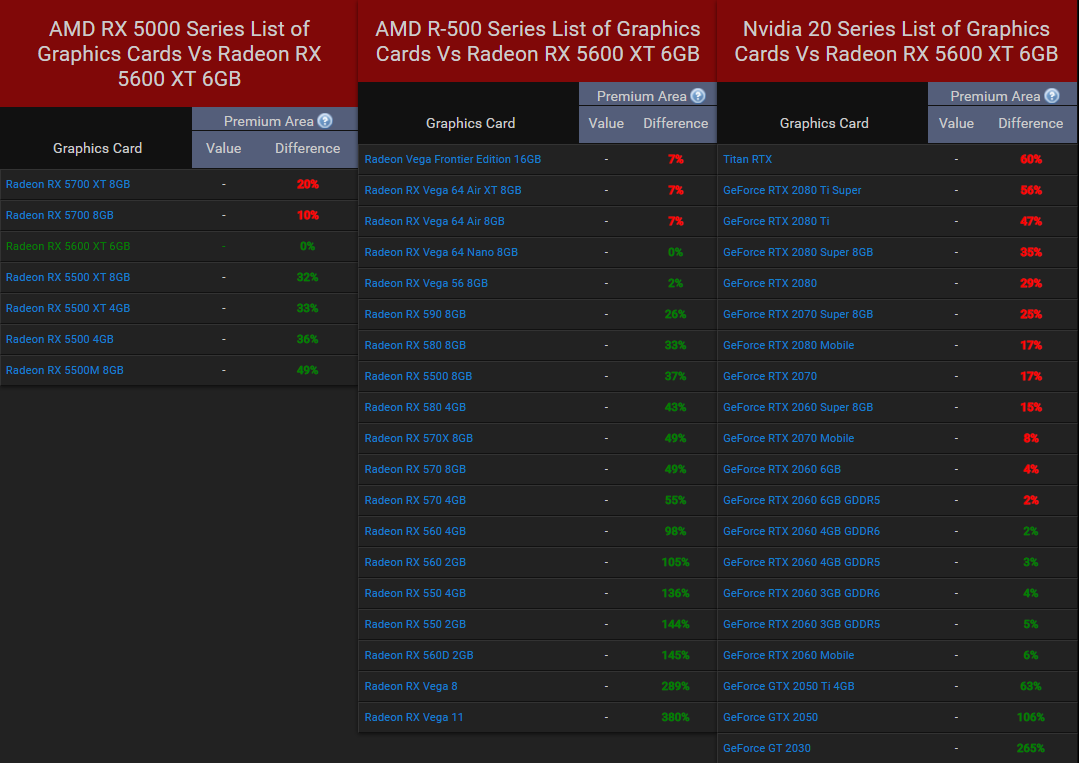 As ever with graphics cards though, it all comes down to price and availability. Nvidia used the launch of the Radeon RX 5600 XT to slash prices on its own GeForce RTX 2060 6GB, bringing it down to $299 and offering ray-tracing capabilities to boot. Considering the two are neck and neck in terms of performance, that extra bonus could well be enough to swing the advantage back Nvidia's way. Whatever AMD attempts these days, Nvidia always seems to have an answer waiting in the wings.

The further unfortunate element for AMD is, depending on your territory, AIB partners have really jacked up the prices for a Radeon RX 5600 XT; there's some wild disparity between the different versions. An XFX RX 5600 XT THICC II Pro can be had for as little as £264, while both the PowerColor variants are selling for in excess of £340. As always, shop carefully, because you could just pick up a Radeon RX 5700 for £285 instead.

Which graphics card is the best purchase?

Rtx 2060 because of the drivers

in my recent experience both AMD and Nvidia have problem with drivers.

What are the problems with Nvidia drivers?

I put together two Nvidia systems before Christmas. The first one, when I installed the drivers from Nvidia's site, half of the games I tested didn't want to launch as they didn't recognize the GPU, by what logic that is, IDK, but the games refused to launch due to that. So I tried the beta drivers, I tried older drivers and finally I had to get a dvd drive and install the original drivers that come with the card and finally everything worked, then I updated them and it worked.(That's with a gtx 1650S).

Second problem was worse, with a gtx 1660S, first the drivers just refused to install, I tried everything, from everything on Nvidia site, to the dvd that came with the card, so I went to windows safe mode and I installed them there to a success, this time the downloded latest drivers worked and the dvd ones didn't even load in safe mode.
The part is that when I rebooted the PC in some games the picture went green + purple-ish for no reason. So I stress test the card, it worked fine, but then I test it on 3dmark and again the same problem, so I go download other drivers to see if it's a problem so I rolled-back the drivers, but again the same, so I asked for a gpu replacement under warranty, and sure enough I got one and boom the same problem...

So I re-installed windows and this time the dvd drivers loaded from the get-go(I was playing it safe so to speak) and then I updated them and it worked, but it was an annoying hassle I had to go through... -_-

Keep in mind I've put together over... easily a lot over a hundred PCs with both AMD and Nvidia GPUs(and Intel CPU and AMD GPUs), so I have a good amount of experience.

My other complaint is when I put together a RX5700 system in October or November, the few games I tested would randomly stutter and even crash for no reason, this happened in battlefield 4 and the witcher 3(two relatively small games I usually download to test PCs in real gaming scenarios 30GB each), so I messed arround changing driver versions and finally one of the drivers was fine and worked well... -_-

I have personally never had problems with my own AMD and Nvidia products. And to be honest, I have had only about half a dozen or a bit more problems when building PCs for people, and I listed 3 of them already.

Both companies have really just screwed up in the last year or so with their drivers. For AMD it makes some sense as they are on a brand new architecture and it's the same as when the hd7000 series came out and the hd3000 series came out, for Nvidia, it's understandable for RTX cards, but for regular gtx cards there should be no problems.

I BOUGHT GTX 1060 AND THE DRIVERS ARE S#IT.. I WANT TO SELL THES NVIDIA **** AND BUY AMD GPU FOR LONG LASTING AND IMPROVED PERFORMANCE AND DRIVER SUPPORT ... UNLIKE NVIDIA, AMD DOES NOT DITCH THEIR CARDS AND STOP DRIVER SUPPORT TO SELL THEIR NEW HARDWARE

RX5600XT definitely is best value right now in terms of bang for the buck. If nVidia could keep RTX2060 at 300USD in stock, that would be competitive, but since those are out of stock, RX5600XT is killing it in value. And yeah, I am pretty sure AMD didn't want RX5600XT to be so close to RX5700, but they managed to "jebait" themselves into it... :-D

Though I guess my main complaint about RX5600XT is that not all RX5600XT are made equal, some cheaper 280USD models actually can't clock their GDDR6 to 14Gbps, meaning you do need to be careful to buy one that will actually get BIOS update for 14Gbps VRAM and proper clock bump. I understand that unlike nVidas 1030 versions, this wasn't intended as malice. But I still think it will cause confusion.

Anyway, if you get proper non-baseline version that got BIOS update with all boosts, this definitely is great card to have. And it was about time for it to come out too, since AMD had nothing in the sweetest market segment of 200-300USD. Now we only need to see if nVidia can keep up with something better. 1660 Super isn't bad in 200-300USD segment, but 1660Ti was just made obsolete.

And just for those 1660Ti owners who might want to defend their card, if you already have it, it is fine performer and definitely not obsolete in that regard. Obsolete is reference to buying new one today.

It performs the same as the 2060, which has proper driver support and rtx. But basically the same.