Intel may have been boasting of record-breaking revenue earlier this week but that’s not to say AMD has suffered an opposite downturn. Quite the opposite, in fact. Far from the PC hardware industry working like Themis’s Scales of Justice, both Intel and AMD are booming right now. It’s win/win for all involved as the popularity of PC hardware continues to explode.

Following in the footsteps of Intel, AMD released its own Q4 2019 Financial Earnings Report, showcasing a 50% increase in revenue year-on-year for the quarter.

Total revenue for Q4 2019 was $2.13 billion, resulting in net income of $170 million. As a result, AMD managed to halve its debt and free up significant cash flow compared to previous quarters. 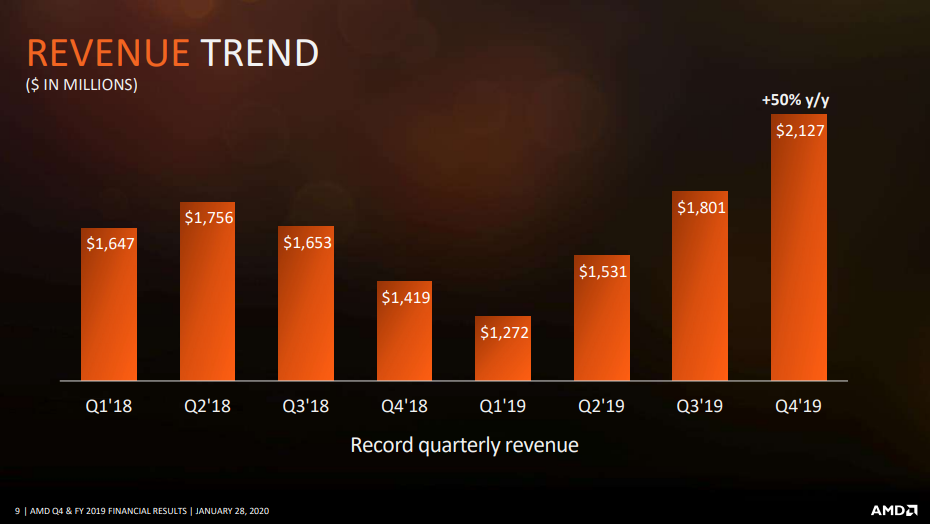 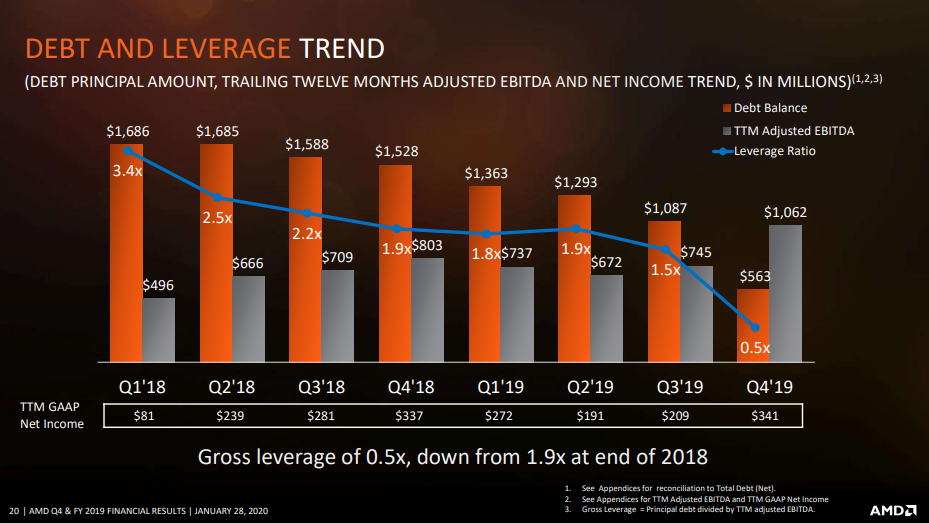 AMD has said the primary driver of the increased YOY revenue was the Computing and Graphics segment (69% of all revenue), namely CPU and GPU sales to typical consumers, while lower revenue was seen in  Enterprise, Embedded and Semi-Custom. What we’re basically seeing here is the flip of Intel’s success, which was driven largely by Enterprise.

“2019 marked a significant milestone in our multi-year journey as we successfully launched and ramped the strongest product portfolio in our 50-year history,” said Dr. Lisa Su, AMD president and CEO.

“We delivered significant margin expansion and increased profitability as we gained market share with our Ryzen and EPYC processors. Our focused execution and the investments we made in our high performance computing roadmaps position us well for continued growth in 2020 and beyond.”

Looking ahead, AMD anticipates further growth of between 28-30% for the 2020 financial year, including revenue of ~$1.8 billion in Q1 2020, no doubt boosted by the arrival of the Radeon RX 5600 series, while the back half of the year will be supplemented by new Ryzen processes and expected high-end Navi GPUs.

Y/Y revenue has increased by 44% not 50%. Caculate yourself. That number is misleading.

Feels good seeing this, since i just upgraded my rig to a Ryzen.

AMD is no longer a second choice They do good work.

They were always a good choice. Although it still seems that they're always playing catch up to Nvidia. By the time they release their Version of RTX gpu to compete with the 2060-2080, Nvidia will already release their next generation of gpus,30xx.

I was talking specifically about ray tracing not about raw performance between the two.