Warcraft 3: Reforged hit with one of the lowest MetaCritic User review scores in history

Blizzard seemingly can’t help but stumble into PR blunder after PR nightmare these days. It’s not what you expect from one of the most esteemed PC developers in history but you know what they say - the taller you are, the harder you fall.

The current controversy swelling around Blizzard concerns the recently released Warcraft 3: Reforged. As you’ve doubtless seen, its arrival hasn’t exactly been met with open arms. Many of the promises haven’t been delivered, including reworked cutscenes and updated audio, there are network and connectivity issues, an aggressive TOS which gives Blizzard blanket control over all user-created content, and features from the original game which have been stripped out, such as clans, competitive ladders and automated tournaments.

Just to top it all off, many of the updates to the online infrastructure have been rolled out to the both WC3: Reforged and the original game, essentially replacing the original classic RTS with a now-broken version.

Following the Blitzchung/China controversy, Diablo Immortal for mobile and a tepid reveal of pseudo-sequel Overwatch 2, this piles yet more misery on the beleaguered Blizzard.

To top it all off, Warcraft 3: Reforged is now one of the lowest score games in Metacritic history based on user reviews. The Critic score sits at a bang average 63/100, which is impressively low for an upgrade of one of the most beloved games of all time. But the User Score? It smashes through the bottom of the barrel with a score of just 5/100 based on more than 16,000 user reviews. Warcraft 3: Reforged has become almost universally reviled in its user reviews, with some 15,500 negative reviews compared to just 649 positive feedback.

There's no way it's worth a measly score of 5%, of course, but it's indicative of the sentiment around Blizzard right now that it's suffered in this manner. 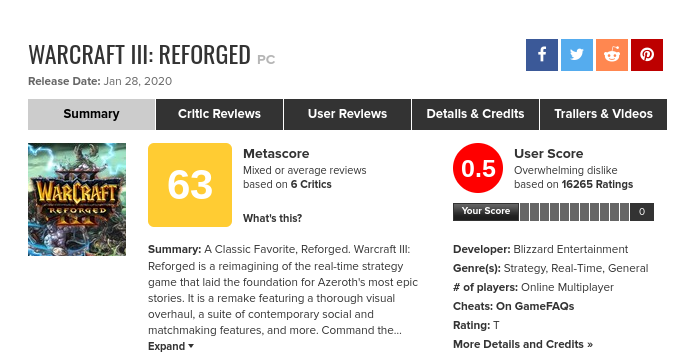 Just when Blizzard had an easy win on its hands, it managed to shoot itself in the foot in spectacular fashion. For a developer of Blizzard’s stature it’s become a remarkable fall from grace. There is now so much riding on Diablo 4 it’s unreal. When fans smell blood in the water it’s imperative you don’t throw them more meaty chunks yet that’s exactly what Blizzard has done.

Can you see a ray of light for Blizzard at the end of the tunnel? With Blizzard now getting the basics wrong, is your trust in the developer damaged? Let us know!

“Uncharted is practically Indiana Jones if you think about it.” - neseri

Other than the bugs and connection issues, which are inexcusable for sure, I just can't quite grasp this outrage I guess. It was a remaster that got remastered well enough, especially for the price. Missing features suck, but for such an old game were things like the Clan system really in demand? With Discord right there?

I don't know what it is with Blizzard, fans either rush to circlejerk them off, or go insane and burn the internet down. There really doesn't seem to be an in-between.

The critic score of 6-7/10 sounds more fair to be honest. Especially given how dated a lot of the game is, and kinda was even then.

Outrage comes form the fact that many of the promised features were scaled back significantly while not communicated and still sold at the same price. But most of it is due to policy changes to custom content, abundance of bugs and removing the original WC3 and tying it to Reforged.

If you pre-ordered this game, you deserved this.

They pre ordered the game based on the original gameplay video and promises, so its not their fault that they flopped them with this unfinished downgraded version of already a downgraded outdated game

But, thats always the case with preorders. Well not always but a good portion.

You shouldn't pre-order a game. Done. If you've not yet learned your lesson than you probably never will though.
By pre-ordering you're buying a product that doesn't yet exist based solely on the marketing by the very company that benefits the most from that purchase. You just shouldn't do it. It's an investment usually at a higher price and you gain from it the exact thing you would if you just bought it at release with a few minor changes.

The only, so to say, justification for pre-orders is exclusive limited editions that give you something physical. A model, statue or an item. Otherwise, it's simply a waste of money, with no benefits.

People will still buy and pre-order, Blizzard will profit. Addiction > moral compass (boycotting, etc.). Their revenue is about 7 billion dollars. Don't kid yourself with the "Blizzard is dead". When you got kids that will screech when they see a new Diablo or something like that...whatever floats their addiction, when you have them, you have a brutal business (Since addiction is real easy to sell)

It's such a disappointment. I've been waiting for something Warcraft RTS related for the last 15 years and they just sat all over it. Warcraft and Starcraft are their largest and most well known franchises in the world, and this is how they treat one of them. They backtracked on almost every promised feature it's actually a wonder that improved models and textures were left in. And as an icing on the cake they decided to fck up the whole creative scene too. Well done.

that's what happens when you introduce a bullcrap EULA and somehow release a ****ed up version of a 18 year old game... so sad at that... their management cared little for their most iconic game...
-_-

Remember that dude on the stage on blizzcon that apologized for...something(never actually stated what for just a bunch of fluff no substance...people clapped and ate it up). We will do better/we will listen... Jup looks like they listened.

"Can you see a ray of light for Blizzard at the end of the tunnel?"
Nah, Blizzard is dead.
You also forgot to mention in your article how you wave your rights to a refund as soon as you open the game, how Blizzard bans anyone from their forums who is discussing ways to get a refund, how the game is riddled with absolutely ridiculous bugs on release which have been known since the open beta, and finally how Blizzard didn't send out review copies ahead of time so people had no way of knowing how it turned out aside from opening the game for themselves and thus losing their refund rights.
It just smells like Blizzard milking their franchise for a few $ and running all around, so f!ck Blizzard and f!ck Activision and f!ck their fake as apology during Blizzcon, this release showed Blizzard's