It’s been a while since we’ve written a story this effect, two years in fact, but Steam has one again broken its concurrent user record.

Steam’s all-time player peak was achieved about 20 hours ago. Exactly 18,801,944 people were logged in to the Steam client at the same time, representing the highest player total in Steam history. It’s been over two years since the record was last broken, when Steam concurrent users crept up to 18,537,490, spurred on by the phenomenal success of PUBG when it left Steam Early Access.

So what’s caused a new peak this time around? Well, there’s nothing in particular which we can pinpoint, especially anything on the scale of PUBG. This is very simply just evidence of PC gaming continuing to grow in popularity, month after month. 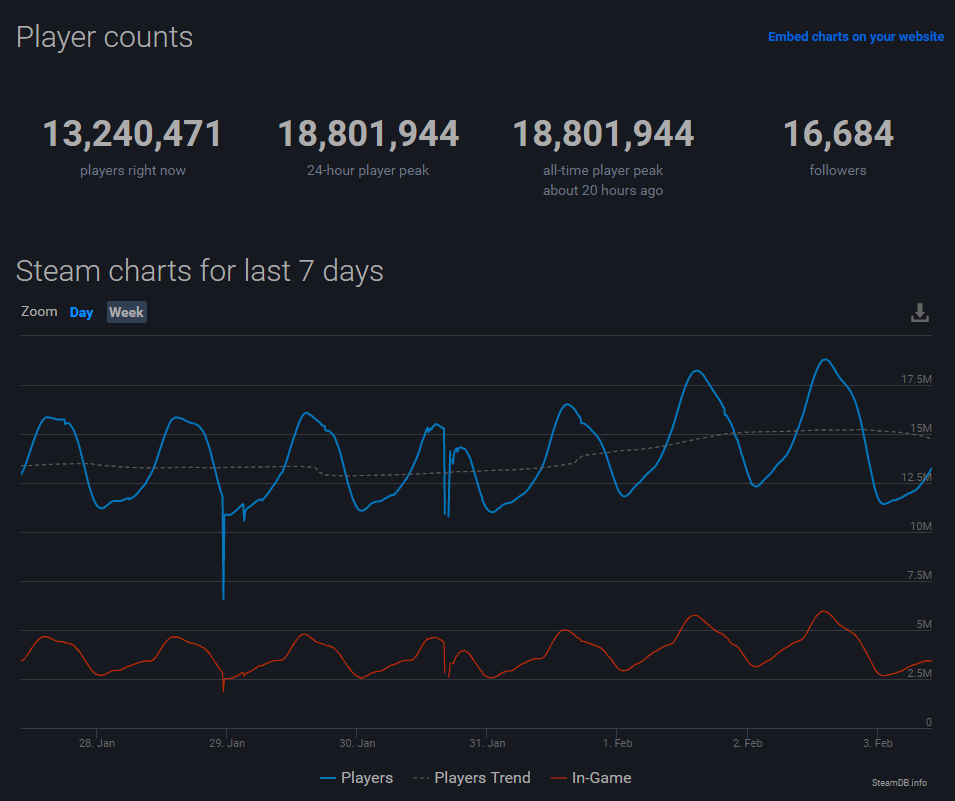 All of this is evidenced by the in-game player count. Despite the peak number of users there were around 5.8 million actually in-game, compared to around 7 million during the previous peak. This high wasn’t driven by any one game but rather than more folks simply have Steam installed, particularly Chinese gamers who are, for a number of reasons, more inclined to be inside and gaming right now.

It would appear the dramatic rise in the number of PC gaming clients and stores, such as the Epic Games Store and the Rockstar Games Launcher, doesn’t appear to have done Steam any harm whatsoever. Steam is still the de facto client for just about any PC gamer and we can only see this figure continuing to creep up in the years to come.

I guess with steam becoming fully translated to Chinese and people in China are getting vacations because of this corona virus I guess more people will play on steam. Or the reason is else? Still coronavirus is no joke...

Blessed be Lard Gaben! now im veeery sorry for offtopic guys, but couldnt find answers: escape from tarkov, will keys transfer after it releases on steam? all i found are old answers :( anyone know anything new? thanks!

Didn't realise this hadn't been addressed. I've emailed them so I'll let you know if I get an answer

great, thanks a lot!
i emailed them too, but seems they are too busy...

Considering that even I've installed Steam (after holding of for over 10 years) those numbers don't surprise me.