Following a good few years in beta, GeForce Now has officially launched. As of February 4th, GeForce Now is a fully fledged cloud streaming service with access to upwards of 1000 games using just about any online device.

GeForce Now is available from today on Windows PC, Mac OS, streaming media TVs, and Android mobile devices, with Chromebook support to roll out at some point in Q1 2020.

While the testing period for GeForce Now was 100% free, things are a little different going forward. There will still be a ‘Free’ tier for GeForce Now which provides standard access and a maximum session length of one hour. After the hour’s up you will be able to restart another session and continue. There’s no limit to how many times you want to do this consecutively.

For those who want a more premium experience, there is also a ‘Founders’ version, mimicking the naming for Nvidia’s graphics cards. Founders will set you back $4.99 /£4.99/€5.39 per month and this price is guaranteed for the first 12 months. This includes priority access to servers, an extended six-hour game session length, RTX-powered real-time ray-tracing, and a 90-day free trial. Nvidia has said the price will go up after one year, although the specifics have not yet been disclosed. During the call, Nvidia said it shouldn’t end up any more than double the current $4.99 asking price. 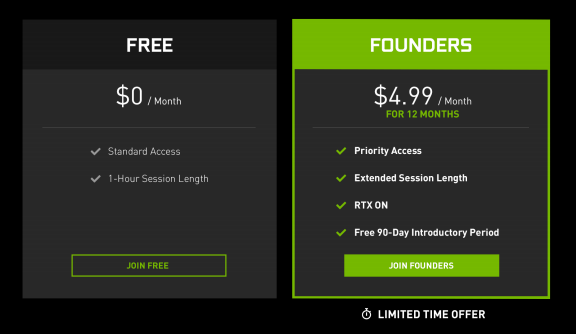 Resolution and frame rate through GeForce Now is currently capped at 1080p/60fps. Nvidia recommends 15 Mb/s download for 720p60 streaming, 30 Mb/s for 1080p/60 and, for the best experience with minimal latency and artifacting - 50 Mb/s.

You can manually set the streaming quality from within the GeForce Now app. Depending on the setting you use, GeForce Now will consume more data per hour. Certainly something to consider if you’ve got a bandwidth cap. 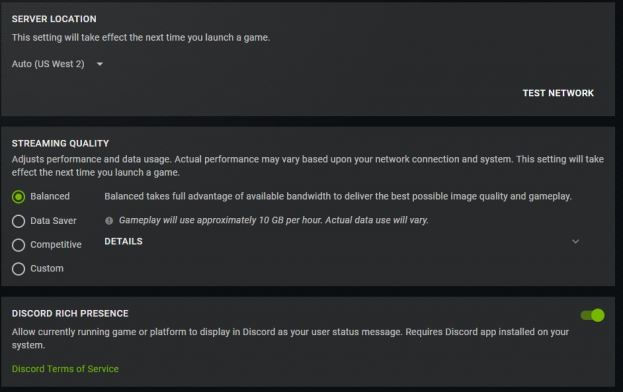 GeForce Now requires a 15 Mbps internet connection (25 Mbps recommended). We also recommend that you use an Ethernet connection for the best experience. If you connect via Wi-Fi, a 5GHz network is preferred.

The key difference between GeForce Now and competitors like Google Stadia and Project xCloud is that Nvidia is keen for GeForce Now to be a fully open standard rather than the walled garden approach.

On GeForce Now, players will, in theory,l be able to access the library of games they already own, through whichever storefront. You buy a game on Steam, exactly as you do now, and GeForce Now provides the means to stream it on the go to a laptop or other mobile device. Compare this to Stadia, where games must be bought through Stadia and can only be played through Google’s service.

The process behind this is fairly simple. You boot up the GeForce Now application, pick your game, and then GeForce Now will load the required client via a VM to launch the game. If it’s a Steam game, for example, the Steam login window will appear, you input your usual login details and you’ll have access to Steam exactly as if you were running it locally.

Behind the scenes, Nvidia’s bank of server racks have been doubled in recent months to account for a launch surge. There will be ‘global availability’ at launch, although it’s certainly weighted towards the northern hemisphere with key servers in the US, Western Europe, Russia, Japan and Korea. 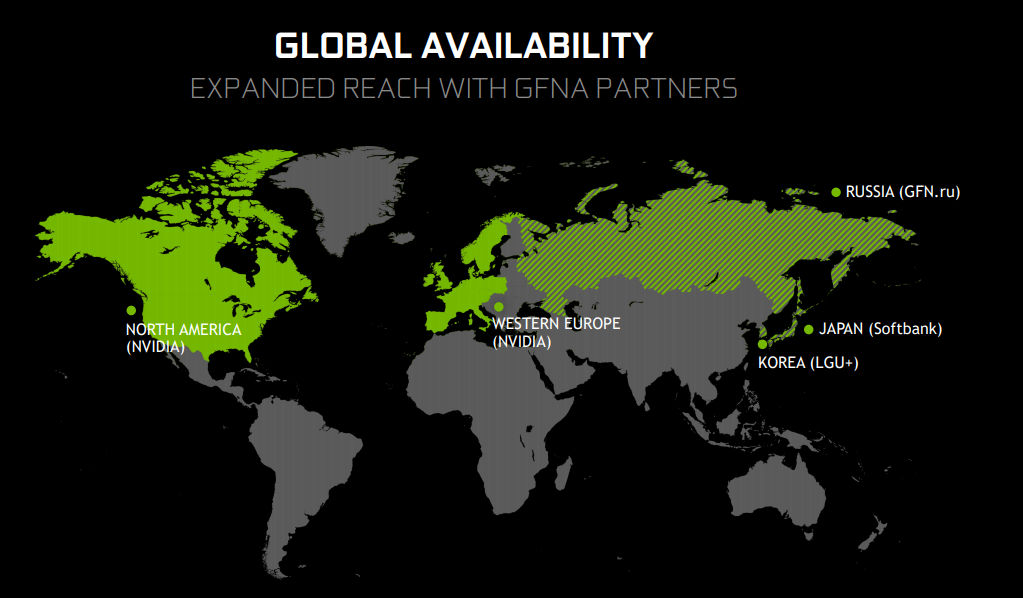 Hardware-wise, Nvidia is using various Tesla graphics cards to power the games, including the GeForce RTX T10-8 and the Tesla P40. This allows users with low-end laptops or Chromebooks to test out top-tier PC gaming with ray tracing in action.

The way Nvidia puts it, the chief driver behind this service is those with decent net connections but under-powered laptops. Around 50% of those who played during the beta had weak hardware which was incapable of playing the latest games at stable frame rates. If you’re wondering what the big ‘get’ is here for Nvidia, it claims “during the beta, over 80% of members instantly upgraded from systems without GeForce GPUs to the latest PC graphics.”

You can download the GeForce Now app now for Windows and Mac (thanks Tzzsmk!).

What do you make of Nvidia's latest offering? Could this spell the end for Google Stadia? Will you even make use of GeForce Now? Let us know below!

LOL, I cant login into steam via GeForceNOW and play any game, because they have messed up keyboard... Is it only me?

Pretty sure its just you. I logged in just fine and wow. I must say i am really impressed. A bit of latency but after a minute or two i was already owning people on APEx legends. definitly worth the 5bux.

Feels pretty crazy right? Yeah the first minute or two can be a little laggy but then your brain quickly gets used to it and it feels pretty seamless

it's actually pretty cool playing AAA games at max graphics on a laptop with intel hd graphics 3000. Wouldn't replace my pc with it but it's probably the better streaming service.

So this is quite different from stadia huh?
This allows you to 'rent' hardware for an ongoing fee.
In stadia, you rent both hardware and the games? I forgot if you could actually buy the games. But even then, here you can play the games you already own without having to buy/rent them again.

I wanted to test out Witcher 3, but it requires Steam version login, so if anyone has GOG version, no luck :(

Support for macOS but not iOS ?

I'd say too early for a closed ecosystem to provide "beta" testing :)

I keep expecting to read that one of the biggest features of this service is to provide a visual upgrade to people playing with weak GPUs, but I keep missing the paragraphs where it's mentioned.

Is that not what the service is about in addition to all the other features mentioned ?

Also, I don't get “during the beta, over 80% of members instantly upgraded from systems without GeForce GPUs to the latest PC graphics.”

Terrible way to say "as a result of using the Now service, the visual experience of users improved from having no/AMD GPUs, to the 'latest PC graphics'"

Also didnt get that. It seems to mean that after experiencing better graphics via game streaming, they actually went out and bought new hardware so they could play games.
Well, thats all good and well for nvidia's gpu sales, but also says something about these guys not wanting to stick with their old laptops and stream games instead.

I tried playing some games i have on Epic games, but it leads me to Steam page. Epic game versions are not supported yet. But it's a first day, I guess they'll fix it.

Any Idea if/when it will eventually be available to South America? I would sign up in a heartbeat if i could.

no word yet. They've just upgraded all those other servers so I'm guessing it may be a while. Could try the free version streaming from NA I guess but er, what, 5000 miles of latency will probably be terrible. Hopefully it happens soon though

I gonna try the free version and see how it goes, i really wish they bring servers to SA as hardware prices are very expensive here.

Yeah I hear the electronics taxes are brutal. Fingers crossed for you

I am in SA and i played. Not bad. On a fast fibre and man i was so impressed. Not latency free as expected but really good.

Ah damn I forgot download links, I stole yours if that's alright

no prob :)
no idea how long those will remain valid though..

oh and in case you haven't joined GeForce Now yet, I tried various methods, and the most reliable seems to be using Join button from the aforementioned installed desktop clients - although it may fail few times, it does work later ;)

Looks like nvidia thought more about it than not at all(google stadia with its "FIRST" in the youtube comments attitude). Remains to be seen in the latency category. Also disappointed its not the xbox game pass style of games that most are hoping from a game streaming service.

When I spoke to Nvidia they sounded pretty certain they didn't want to get in the business of selling games/selling access to all-you-can-eat subscriptions. They tried it in the test period and they said the feedback from fans was 'stay completely platform agnostic'.

Also even if geforce now shuts down you still own all of your games on steam/EGS/uplay/Battle.net.

I think Geforce Now is great for what its purpose is. Basically it's $60 pounds a year for a remote gaming PC, and for those not willing to pay large sums of money, plus those who travel and students it's the best thing there is right now. I agree with their decision not to sell games, for the reason given by Zenmaster, plus the cost would likely be higher.