Nvidia has launched GeForce Now with all the crazy promises we've come to expect from cloud gaming services over the years, from OnLive through to Google Stadia. Incredible visuals! Imperceptible leg! The Power of the Cloud! But all of this is just empty rhetoric if the final product doesn’t work. And rest assured, this is now the final launch product we're dealing with when we look at GeForce Now.

Before we delve into this, it’s worth highlighting that the quality of GeForce Now is going to be highly dependent on your internet connection. Nvidia recommends 15 Mb/s download for 720p60 streaming, 30 Mb/s for 1080p/60 and, for the best experience with minimal latency and artifacting - 50 Mb/s. For now, Nvidia has perhaps wisely decided to cap the resolution at 1080p. There’s no 4K support for the foreseeable future.

You can manually set the streaming quality from within the GeForce Now app. Depending on the setting you use, GeForce Now will consume more data per hour. Certainly something to consider if you’ve got a bandwidth cap.

Let's cut to the chase though - it works. There are some caveats but GeForce Now absolutely does work, oftentimes impressively. Upon first booting up the GeForce Now app there were early warning signs, however. When logging into the launch edition of GeForce Now with a Founders account I was warned my connection was spotty and my resolution was therefore capped at 720p. 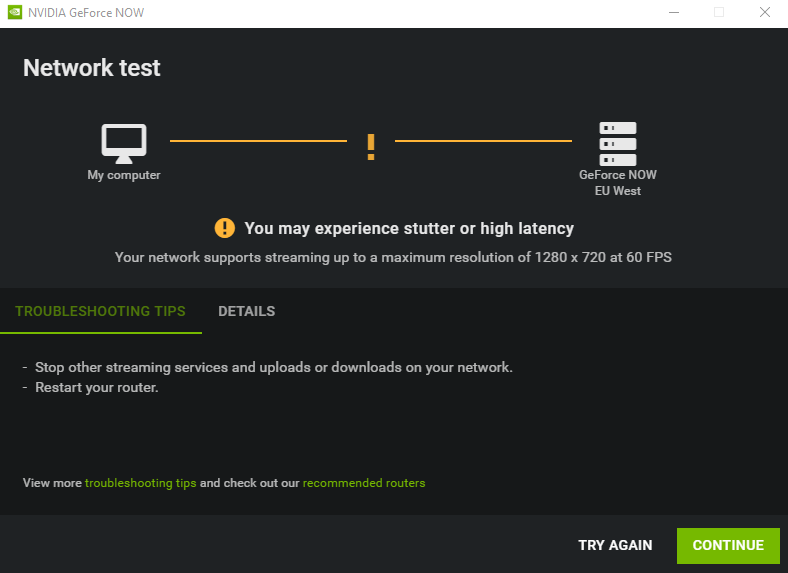 A quick speed test told me my connection here is plenty fast enough to handle GeForce Now at optimum settings. After a quick bit of DNS fiddling, as well as tweaking the GeForce Now settings to force 1080p, I was good to go. 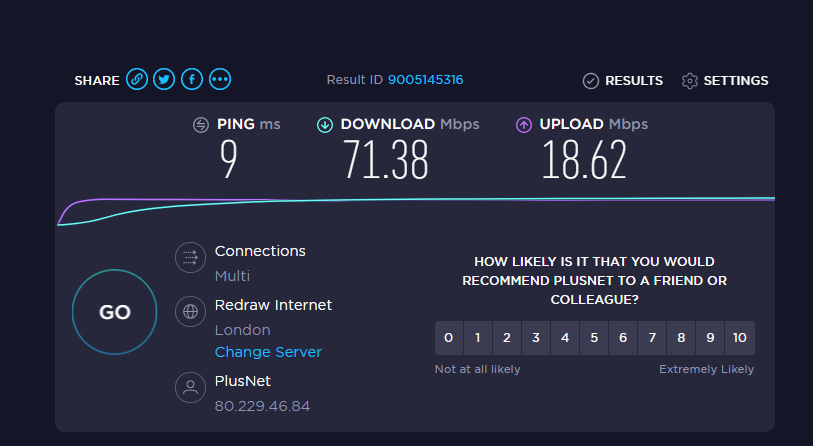 My first port of call, naturally, was Doom 2016. Id Software’s FPS masterpiece is my go-to game for testing overall visual quality, performance and lag. A game like Assassins Creed: Odyssey can be easy to fool you over a stream, Doom is a different matter entirely.

And yes, there is input lag. It’s going to be impossible to have these cloud gaming systems without at least some degree of lag when compared to playing on local hardware. It was immediately noticeable in Doom but, given a minute or two to get used to it, it begins to feel very natural. Purists will always find the best experience from playing on their gaming rig with a meaty graphics card but GeForce Now comes a surprisingly close second.

Once I’d run through a level and adjusted myself, Doom actually felt nice and responsive. It wasn’t long at all until I was playing Doom exactly as I’d expect to. Ripping, tearing, and generally being impressed by how gaming through a video stream could feel. Kudos to Nvidia here because GeForce Now really does work. It’s probably the smoothest game streaming experience I’ve had, and I’ve tried them all by now.

Image quality is pretty sharp, if a little less vibrant than you’d expect from playing a game locally. I barely noticed any artifacting whatsoever, outside of a bit of trouble with crushed blacks which you tend to see with streaming. Quality is going to vary though, so it's of course possible image quality me degrade significantly if your connection is a bit spotty. GeForce Now is designed to be able to scale resolution dynamically, depending on your settings, which sacrifices image quality but ensures reliable response times. 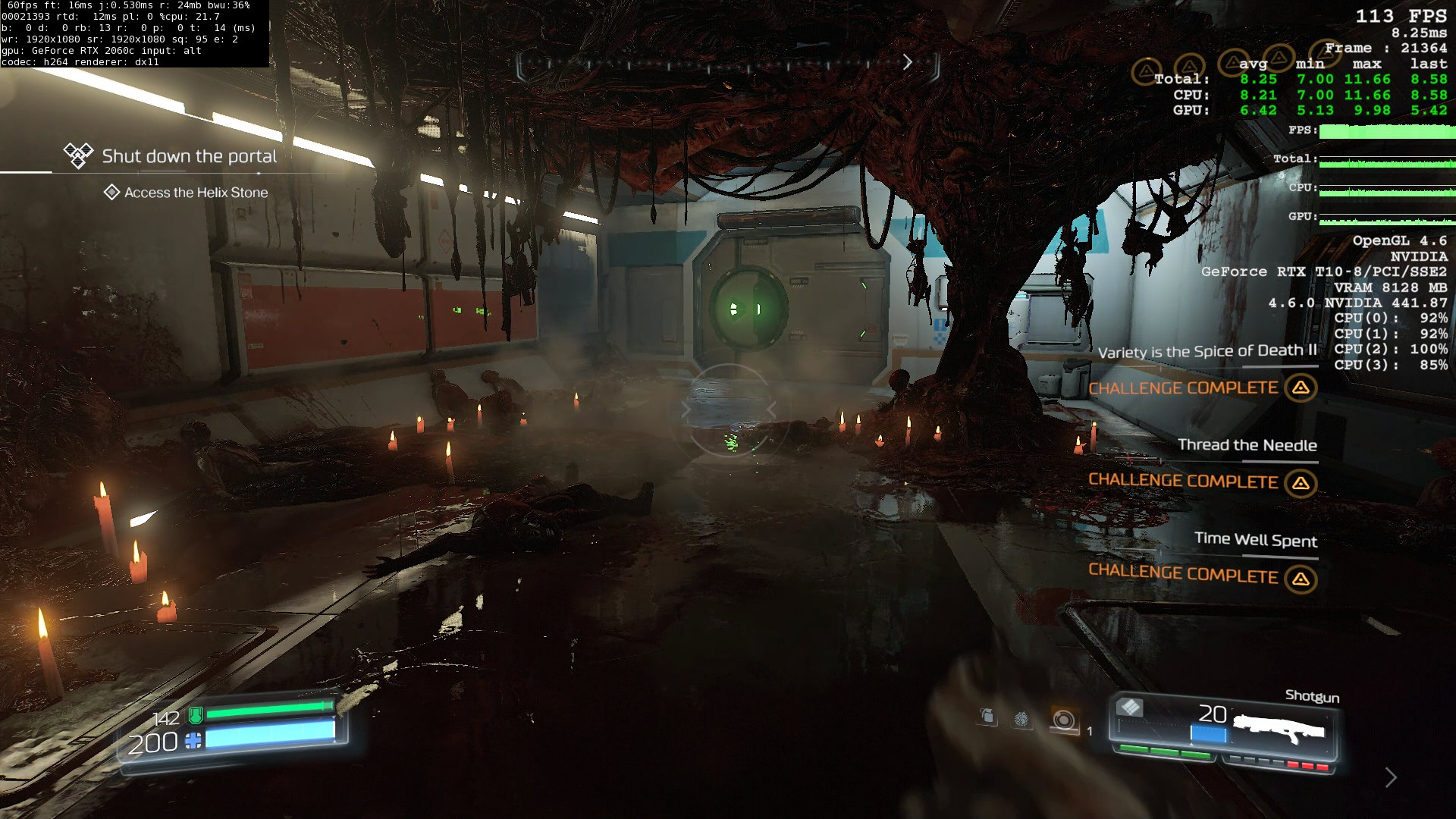 GeForce Now is impressive enough that I can absolutely see the appeal of having a dirt cheap laptop to back up your gaming rig, for those moments when you want to play some Planet Zoo on the couch. It’s a ticket to a high-end gaming experience from very basic hardware and certainly not something to be sniffed at.

The cherry on the cake has to be the game support though, with an impressive array of games already at your fingertips. Being able to log in to your Steam, Uplay or similar account and just download your cloud saves and pick up where you left off is an absolute godsend.

I gave Metro: Exodus a test run through the Epic Games Store and it largely went without a hitch. The first time I tried it crashed on boot but during subsequent sessions it all worked fine. Metro Exodus was one of the first games to feature real-time raytracing and, if you don't have an RTX graphics card, this is the best way to test it out. Metro was running on a GeForce RTX 2080 and Nvidia has assured us while running raytracing games we will be given the entire performance of a GPU. I was able to turn all of Metro Exodus's settings up to Ultra, including ray-tracing, and experience was largely the same game as the desktop experience. Due to the slow nature of Metro it was a very playable experience as well.

In other, less demanding games, Nvidia is able to carve up the performance of a single graphics card between 2-4 other users. 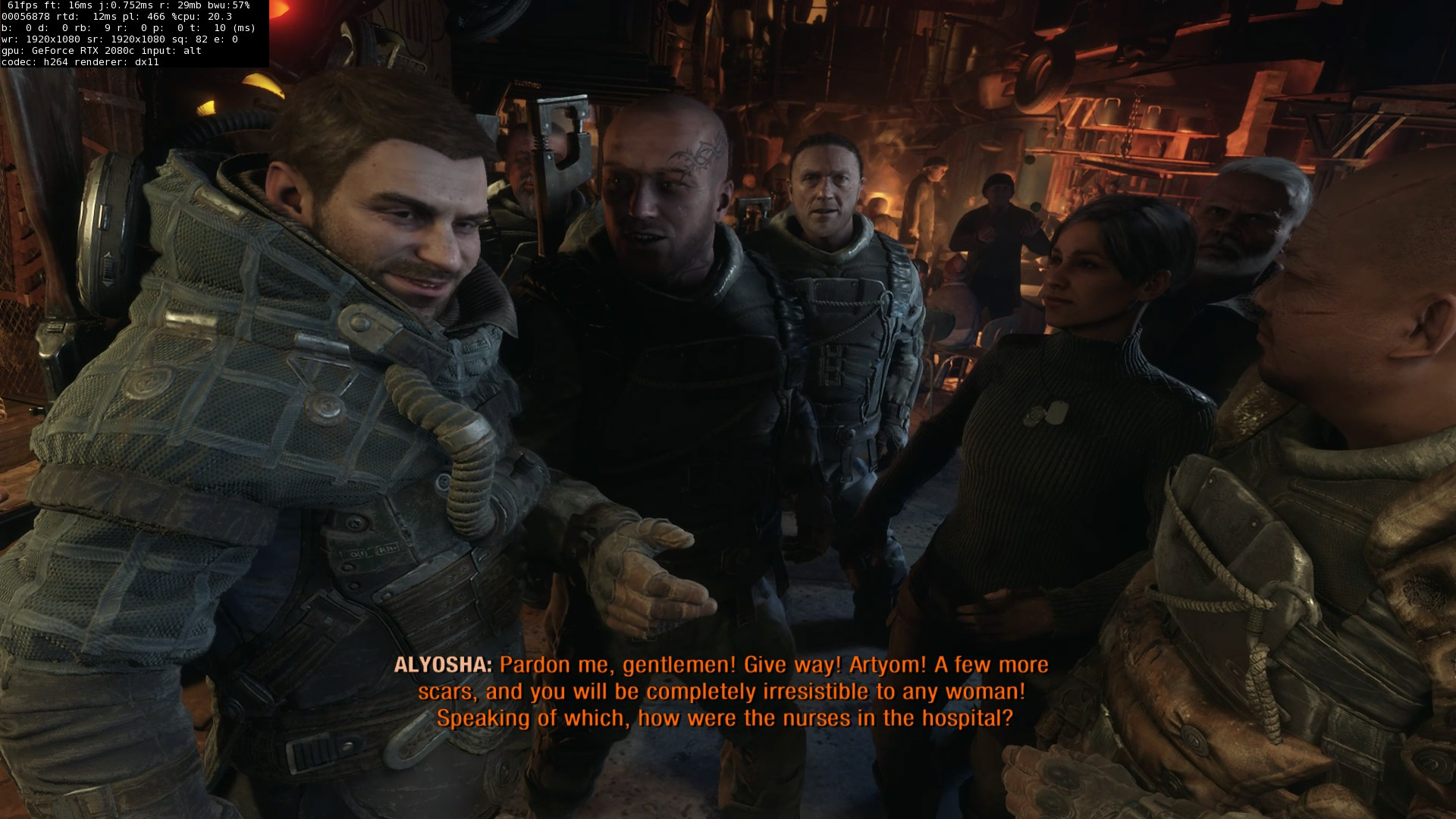 But, GeForce Now is still a service with some inherent downsides.

Some of these are issues which can be sorted out in time. Others can't. We're prepared to give Nvidia the benefit of the doubt here though, for now, as the offering is superb when stacked up against the competitors. At $4.99 this is a pretty cheap deal, and granting access to your current library of games pretty much kills the current version of Google Stadia dead in the water.

For now, it's going to be really interesting to see how Nvidia's servers cope now the floodgates are open. Around 300,000 users were invited to the beta test. Now, anyone and everyone can try out GeForce Now for free.

Stadia was alive in the first place? Lol

but can't play anything because of this popup:
"We've reached our limit for the number of gamers who can wait for the next available rig. Please try again later."

Stadia manage to start something, other took it and did better. Doing better something i hate mean that i'll hate it twice.

Stadia never started it, Nvidia actually had the beta much earlier than google, but on smaller scale.

biggest potential I can see in such tech is online games being run from servers with clients being run directly within those servers with only remote streaming access like this,
in the end though, this ultimately depends on worldwide network infrastructure which is so far yet much worse than old good DVI + usb 2.0 cable directly "in house"

Stadia was alive in the first place? Lol

Stadia has been dead the day after it's release.
Cause that is the amount of time ppl needed to see what a piece of garbage it was/is.

I understand creating a need in the market artificially but does stadia really need a killer? Isn't it its own killer?

Steel Division Normandy 44 is not available... :(
And I wanted to see how it looks maxed out...

I tried it, looked good :D
Altho it did not feel like 60 FPS with Hitman 2 with 100% supersampling and everything on ultra :D

Yeah it would be handy if each game had an FPS overlay. I'm guessing you could just apply the Steam FPS overlay to know for sure whether it's the game or the stream which is struggling?

I guess? btw the steam harware info showed it was running on a Tesla P40 and a 4C/8t xeon cpu

just tested, the fps dropped to 39-45 with 2x supersampling but it is understandable, the p40 is not strong enough for that :D

Sometimes you don't get the full GPU either, especially now with it being busy at launch. Up to 4 users per GPU but yeah, it should hit 60FPs and shouldn't share with other users if it isn't

in the other session i was allocated a 4c/4t intel cpu and a Tesla RTX T10-8, seems like they throw in everything they have available

I like how I just need to log into my current services and play my games. No need to have to buy everything over again.

This seems like something that exists as a option not google stadias "throw away your pc and console you dont need em any more". You own your games on steam or whatever and for 5$(or free for 1h sessions) have the ability to stream it on a garbage laptop/mac or on android with a controller. It isnt marketing itself as the end all solution for gaming more of a its there if you want it.

I personally wouldn't like my games played via stream so from my point of view anyone could kill Stadia and I wouldn't care.

I absolutely refuse to play games via streaming.