If you're hoping to buy one of these gorgeous-looking CP2077 video cards then you're all out of luck though. Just 200 of these Cyberpunk 2077 GeForce RTX 2080 Ti's have been manufactured, with 77 to be given away through an online sweepstake. The remaining 123 RTX 2080 Ti's will be available in other giveaways and charity auctions.

Am I only one thinking Nvidia cheaped out a bit here by not at least manufacturing 2,077 of these things?

For all intents and purposes, what we're looking at here is exactly the same as a vanilla GeForce RTX 2080 Ti, this time with a rather fetching yellow shroud adorned with the Cyberpunk 2077 logo. 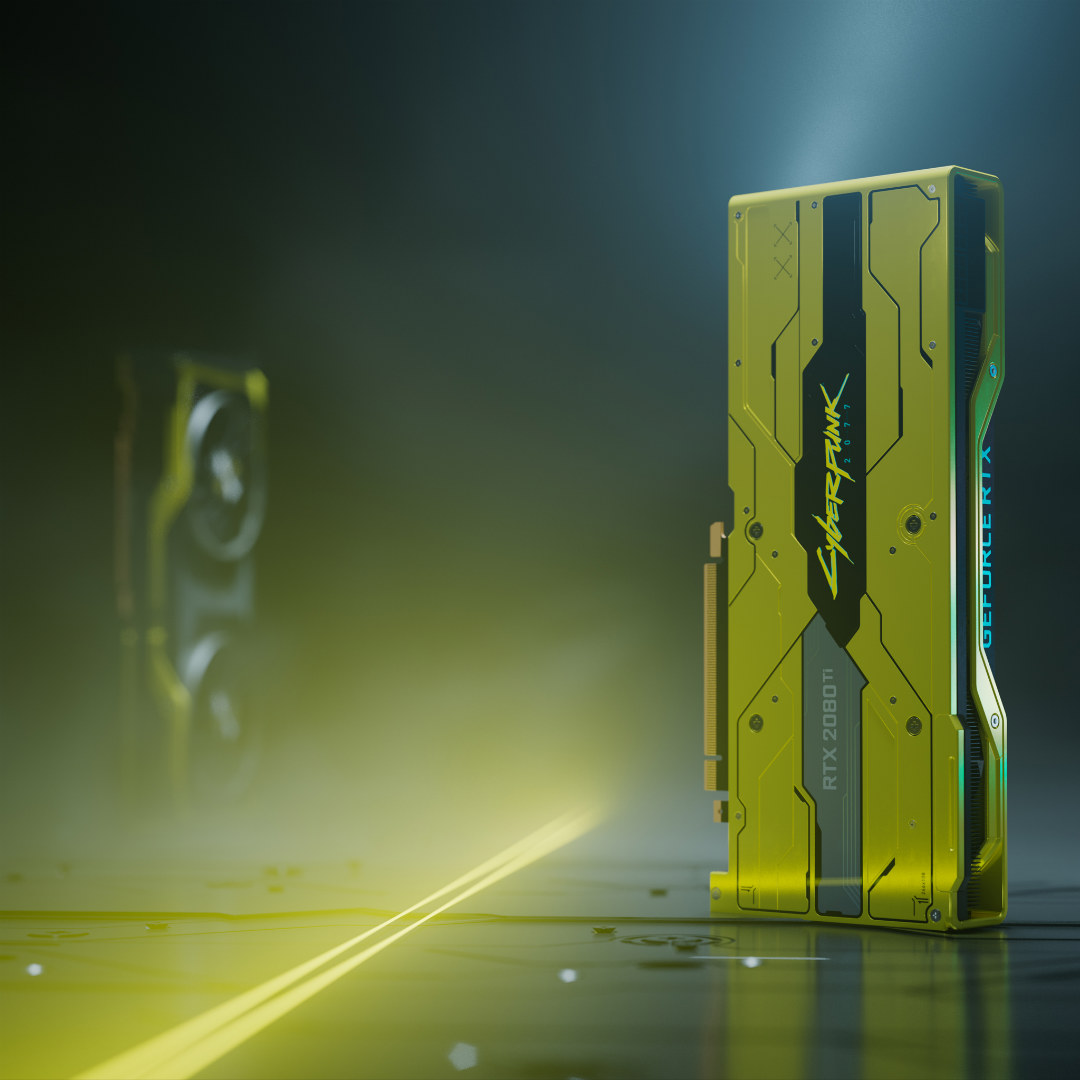 In order to be in with a chance of winning one of these puppies, you'll need to #Engage #With #Nvidia #SocialMedia #Channels by following the instructions below:

Nvidia has set pulses racing with the tease of an all-new GeForce RTX graphics card to tie in specifically with the upcoming launch of Cyberpunk 2077.

CD Projekt RED sent a cheeky tweet out to Nvidia GeForce saying “Hey @NvidiaGeForce, what do you think about making a limited edition #Cyberpunk2077 GPU?”, following it up with “Oh c'mon! Don't tell us you never thought about it…”

Nvidia played ball, telling Cyberpunk to “Stay tuned…” before sharing a heavily blurred image of a special edition GeForce graphics card. It looks as if it’s sporting a neon yellow trim on its shroud, just like the Cyberpunk 2077 logo.

Naturally, the rumour mill is swirling as to what this graphics card could even be, ranging from a proper special edition GeForce RTX 2077 GPU through to simply a modded shroud on an existing GeForce RTX 20 Series video card, perhaps a custom version of the Nvidia GeForce RTX 2080 Super 8GB.

One thing to consider is that since Cyberpunk 2077 was delayed to September 2020, a 20 Series GPU possibly may not cut it. Nvidia’s next-gen GeForce graphics cards are expected to be out around then, so this could potentially even be tied in with Ampere.

What do you think it could be then? Is Nvidia cooking up a next-gen video card to tie in with CP2077? Or do you think this simply a limited edition version of a current graphics card? Let us know!

is it worth upgrading my 1080ti to a 2080ti at 1080p?
only this version and edition i am interested in and the cost does not matter?

It is worth asking if cost doesn't matter?

yea, because i get on average about 100fps at 1080p ultra settings on most games.

If the cost doesn't matter then the 2080 Ti is obviously better. Do I think it's worth it though? Not really, you've already got excess performance for 1080p

The issue is the card is not for sale. So I would like someone to sell it to me, if they win it or get one.

Seems pretty cool, I'd rather they do stuff like this after the game comes out though.

I want one.. if anyone wins one regardless of country, please sell it to me. i can do the transaction through PayPal.

So it's a yellow 2080Ti, just like I said it would be. Shame the front LEDs aren't saying something nicer, though.

That being said... only 77 made? Can't wait to see the ebay prices when these puppies ship...

They missed their chance to release a RTX 2077. XD

Since I don't know any online gamers/streamers I don't have anything "positive" to say about em (PieDiePie doesn't count and I'm in a bad mood today anyhow).

Also I am tired of the "positivity" bs that's being forced down everyone's throats.

From what I recall GN blasted Nidiot for the reference GPU build quality, so I say not.

Is it just me or that card looks like regular nVidia version with greenish LED lit edges? In any case, I bet it will be like with Titan, when they made Star Wars edition and saw how people are willing to buy it, so now we have 2080Ti at Titan prices. So I bet it will be either 2080Ti or maybe they will try Titan again, so 3080Ti will cost same as RTX Titan, if it sells well. Lovely... :-D

That looks like a 2080Ti to me with green paintwork - deffo won't be an LED along those edges, looking at my cards. Probably just green or yellow paint. Yellow would make sense - to match CP2077 theme. The portion where the "Geforce RTX" should be glowing - it's blacked out right now, meaning the card might say something else due to the collab. We'll see :D

Quite a bit of drama here.

Brands and companies interacting as individual people genuinely makes me a bit sick.

Look at us we(the emotionless corporations bent on making all of the worlds money) are cool and relatable!

It's for the children...

BS aside, I think it was Wendy's in the US that started the trend.

Why do I have a feeling it's not going to be on the cheap side, yet very expensive model?

It'll be a custom made, few of a kind GPU. You'll be paying a premium on top of premium if you want it.

If Nstupid will mark up the GPU cause they can, burn em.