Nothing stops the train that is Rainbow Six: Siege. Here we are, well over four years since it launched, and Siege has now broken its all-time concurrent player record yet again.

Rainbow Six Siege has hit a 24-hour peak of 178,824 players concurrently through Steam alone. This doesn’t take into account Uplay players as well as Xbox One and PlayStation 4 users. Combine those two and it’s perfectly conceivable that Rainbow Six Siege is counted among some of the most popular games on the planet.

The previous record was attained in March 2018, during the launch of Operation Chimera. Since then, the monthly averages have been tracking upward and we’re now seeing record numbers signing up to breach and clear. 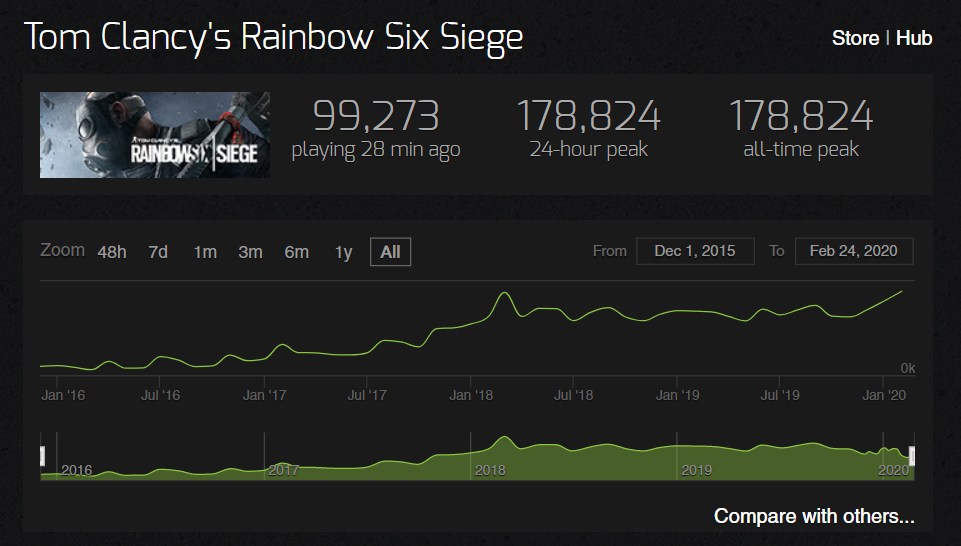 That is an incredible success, and some turnaround from a launch that was promising yet tepid. The general vibe around Siege at the time of its launch was players weren’t keen on the shift to a multiplayer-only model, with many begrudging the cancellation of the more traditional Rainbow 6 Patriots. While it would still be fantastic to get another proper single-player Rainbow Six experience, Ubisoft quite clearly envisions Siege as a game with legs which could last for years to come.

Rainbow Six Siege has become one of a handful of titles which can survive a generational transition, eschewing sequels in favour of a constantly evolving and growing experience. Each Call of Duty may shift tens of millions of copies but, in 12 months, the last one is all but forgotten. In terms of value for money, it’s difficult to argue the proposition Ubisoft has put forward with Siege, despite the profluence of microtransactions.

The recent spike in Siege’s popularity is no doubt down to the recent Six Invitational eSports tournament and the unveiling of Year 5. The next season hasn’t even begun yet but we’re expecting the record to be broken once Operation Void Edge is unleashed in March.

Nothing stops the train that is Rainbow Six Siege. Here we are, well over four years since it launched, and Siege has now broken its all-time concurrent player record yet again.

I'm glad to see it turn around, not because I play it but because it gives me hope that more developers will go the R6:Siege way (and more drastically NMS); supporting their games long term in a time where launching unfinished/broken games seems to have become the norm instead of the exception. If Anthem can turn things around in the next year (long shot) it'll be a milestone for the industry and hopefully more will follow (more fixes, not more broken games).

The Vulkan API really improved the gameplay and Fps for me.