We laid eyes on the Doom Eternal's system requirements, which have since been pulled due to community backlash. But we figured we would take a look at them, as it will still give us a good eye on what type of thing to expect from the new DOOM Eternal system specs. However, we know these requirements will change again soon, to be a little less...diabolical.

So DOOM Eternal has some pretty serious requirements, although it is worth noting that the recommended requirements are for 1440p screen resolution at high 60FPS. And the requirements are being massaged as we speak to be more accommodating.

Doom Eternal's recommended graphics requires a Radeon RX Vega 56 8GB graphics card with a Core i7-6700K 4-Core 4.0GHz or Ryzen R7 1800X processor to reach the recommended specs, achieving high graphics setting on 1440p. For your PC to completely meet the recommended requirements you will also need 16 GB system memory. To run Doom Eternal even on low graphics settings at 1080p your PC will require at least a 4GB GeForce GTX 970 4GB / Radeon R9 290 with a Core i5-2500K 3.3GHz or FX-8320 CPU. This will return an average of 60 frames per second. The minimum RAM requirements are 8 GB system memory.

Another point of note is that with some tweaking the minimum requirements are looking at 60FPS on 1080p, so that will also give people some scope to tweak the graphics settingss on DOOM Eternal to get it running, even if you have an older weaker machine.

Anyway, we expect some new ones to come up soon, but we expect they will be fairly similar but will be focusing on recommended being 1080p instead of talking about it as 1440p.

Here they are if you wanted to see them. 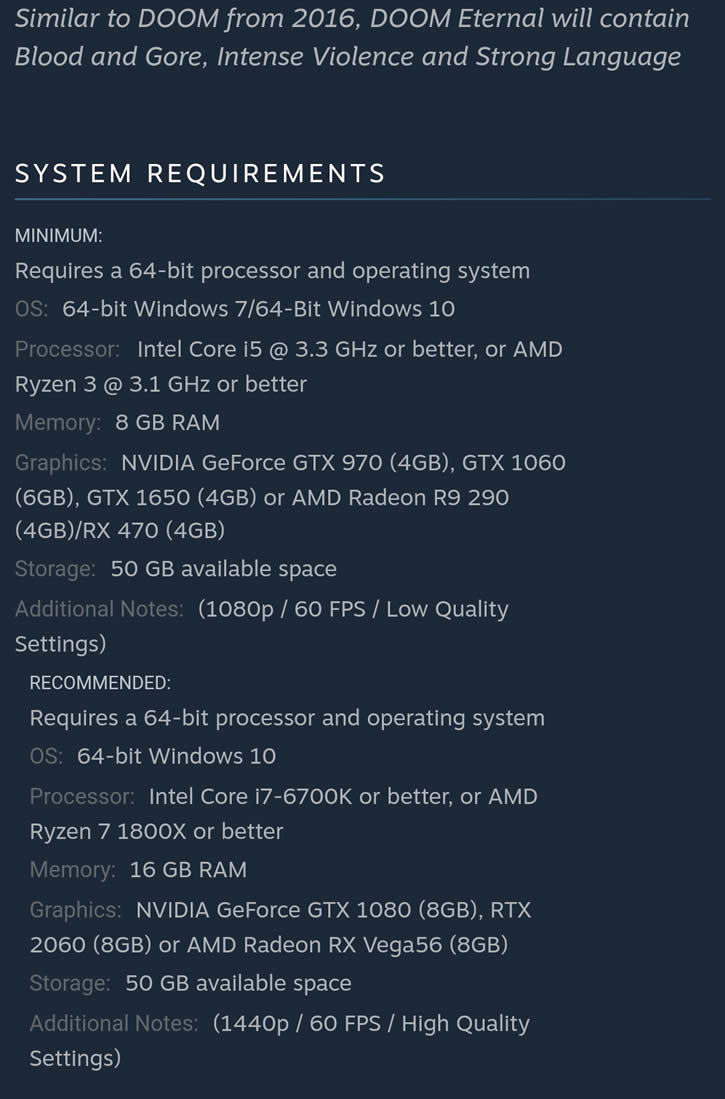 “Sleeping Dogs Definitive Edition might be free next week” - Ryo12912

A GTX 1060 at minimum? Sees a bit high and cuts out most mass-market players.

It's just weird because the game looks pretty much the same as the previous one, yet the requirememnts went up crazy lol

i think textures are 10x more detailed according to devs as they criticized their own visual fidelity for being less than ideal.

Well kinda makes sense, but I'd like to see requirememts for Ultra 1080p, it's not like everyone plays at 1440p

Looks much better than the previous one, much more variety, wider and bigger areas, way more details and higher resolution textures.

The benchmarking videos for Doom Eternal will certainly be worth watching for the truth about the recommended specifications. We’ll see in a couple of weeks.

I don't get it, where's the problem?

People are butthurt because the human eyes can only see in Ultra Settings spectrum!

I don't get it. Isn't this pretty much in line with how modern games require more powerful GPUs? And how is needing a GTX1080 on 1440p high settings a lot? There's only so much power you can squeeze out of older cards to reach the minimal reqs.

You are incorrect. The base PS4 GPU is similar to an HD 7870, which is a lot weaker compared to a GTX 1060 or RX 580 and it's more or less the same for the original base Xbox One too. However, the Xbox One X and PS4 Pro has a GPU more or less as strong as the RX 480 / RX 580 if I remember correctly. I quickly googled what the Switch equivalent would be and it's around the performance of an Nvidia 830m, which is a lot worse than the HD 7870.

Ah, sorry about that, I see what you mean now. For some reason I was thinking you said they are equivalent to them. Console games are usually heavily optimised to make it run on their hardware and it becomes a lot more obvious near the end of its life cycle. Console versions will definitely have lower quality (base models) and I would love to see the quality difference between them and how the performance is to PC.

Just because it's in the system doesn't mean the graphics will be comparable. On all three consoles, the fps stays around 60 and the resolution moves up and down as needed. That's a lot different than set and forget of PC settings.

so they are trying to rip and tear our GPUs

All at doom's gate too!