We find ourselves once again scorching the Earth (or, more specifically, our PC systems) along with the DOOM Slayer, fighting hordes of demons in our merry trek across the umbral planes. We all saw those Official System Requirements last week that broke us into a sweat just by looking at them, but is DOOM Eternal really that demanding? We aim to find out...

Before we do though, we just have to quickly talk about the graphics settings: there's the usual Low, Medium, High and Ultra, but joining us in this ravenous conquest are Nightmare and Ultra Nightmare settings. We tried to benchmark all those settings with different GPU's, but DOOM Eternal has an interesting feature: if you exceed the maximum VRAM then you can't apply your settings. That means that, as hard as we tried, some graphics cards just weren't capable of going above Ultra (and in some cases, High or even Low). So we've compiled the results below and included higher graphics options where we could apply them. 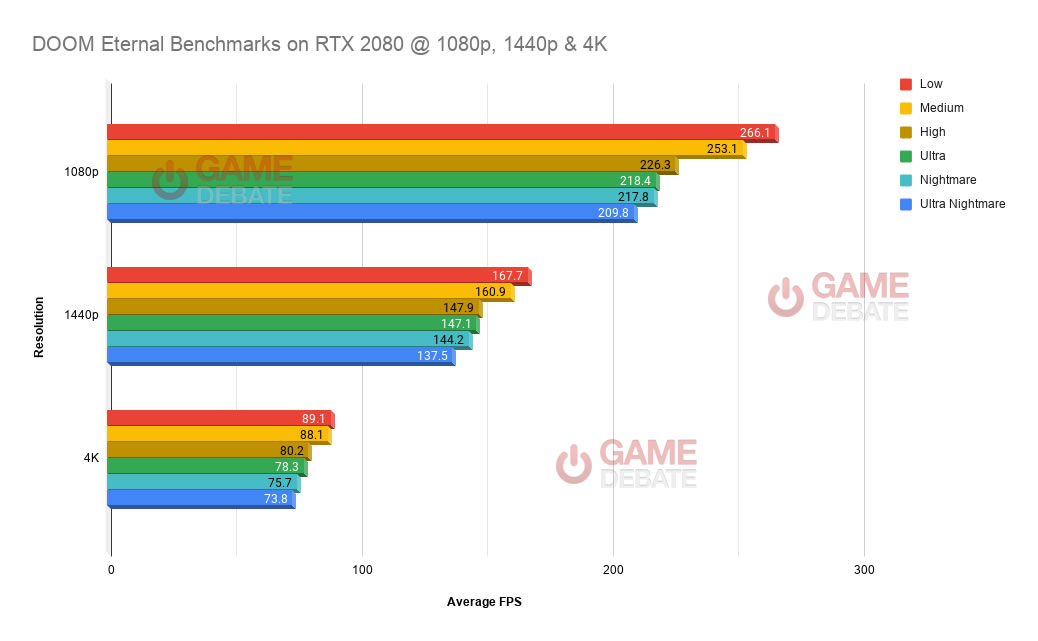 With the RTX 2080, one of the most powerful gaming graphics cards around today. The recommended specs for Ultra Nightmare and 60fps at 4K is the RTX 2080 Ti, but here we can see that the regular RTX 2080 version is solid. Whilst it's certainly gorgeous to look at in 4K, the extra frames you get at 1440p will be preferable to help keep your game of DOOM Eternal flowing and your shooting accuracy up. 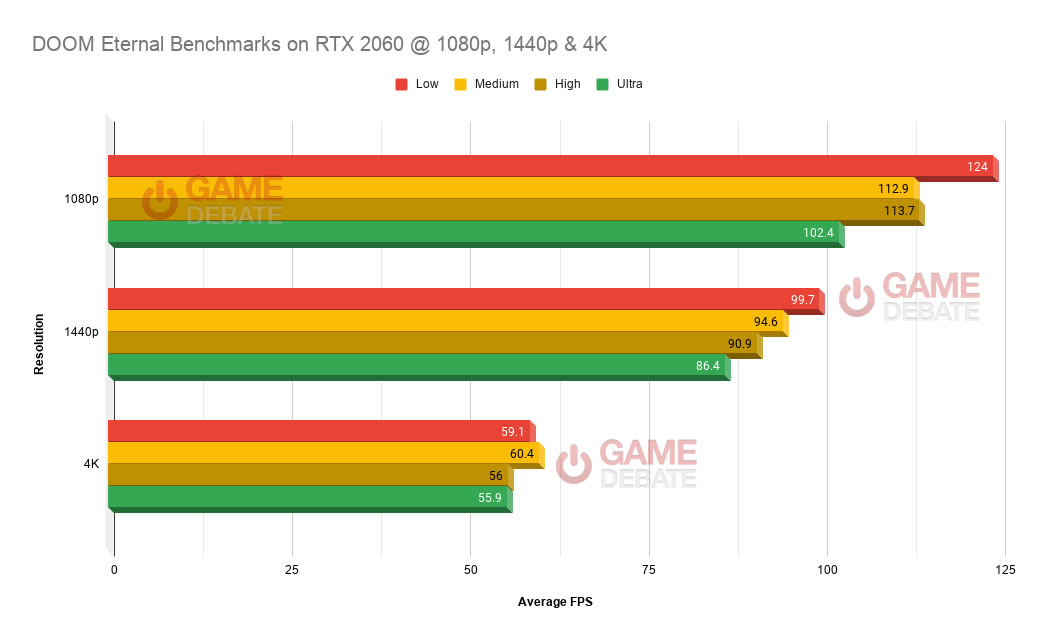 What's more interesting here is that RTX 2060 quite surprisingly under performs. We weren't expecting it to be anything like the RTX 2080, but it's definitely lower than we expected. That said, 1440p gaming is definitely acceptable with the 2060. Whilst this framerate in 4K would normally be okay for other games, here it's pretty much a no-go. 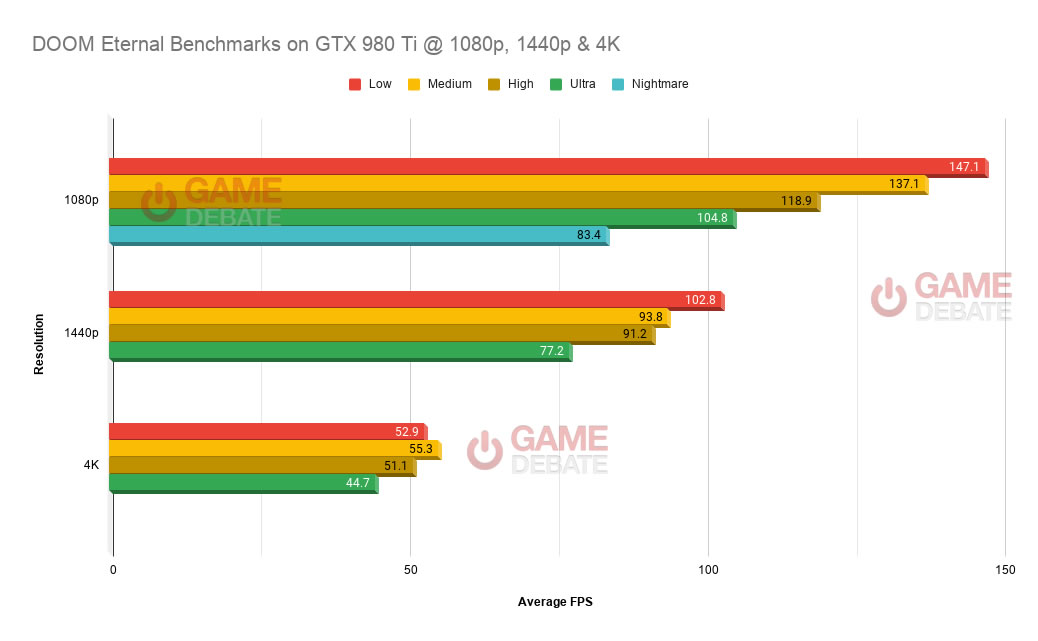 The trusty 980 Ti is still going strong it seems, even outperforming the RTX 2060 in some cases. It seems that if you're going to be playing 1080p, you could probably push it to Nightmare settings. You may dip below 60fps at times, but it's certainly playable. 1440p users would probably benefit most at High settings, maybe Ultra if you're feeling daring. But once again, 4K is still playable, but not preferable here. There was an oddity in the 4K Low setting compared to the Medium 4K. We retested a couple of times in the same area with a similar result. So we put it down to an odd hardware bottleneck in just that particular testing area. 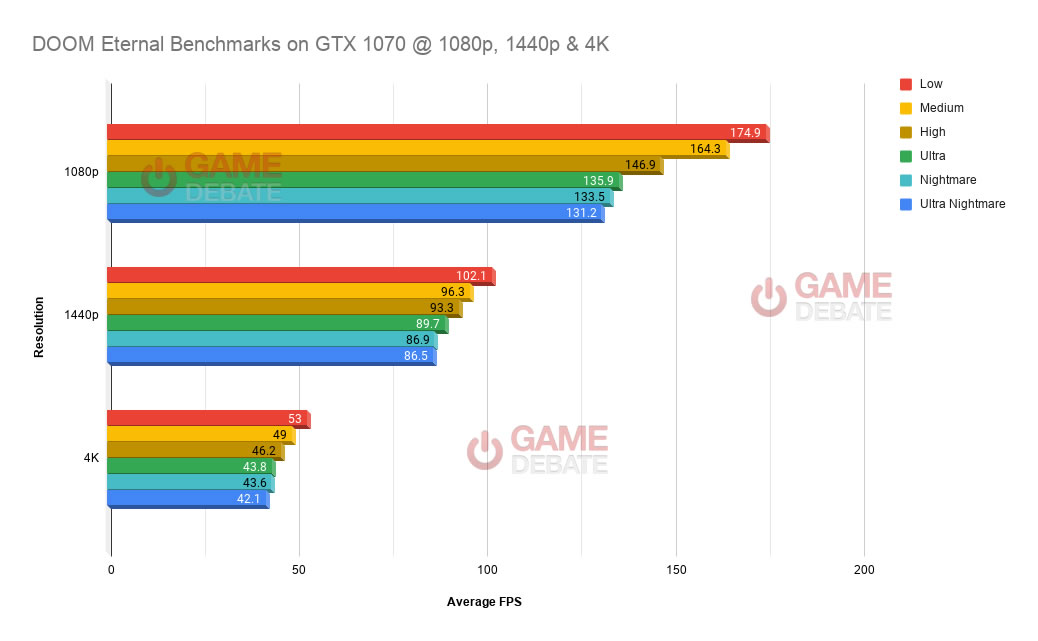 The Nvidia MSI GeForce GTX 1070 does a remarkable job at 1080p, even at 1440p on Ultra Nightmare settings. If you're looking to play in 1080p, you'll have a really good time in terms of performance. Its certainly worth noting that the GTX 1070 has 8GB of VRAM which allowed it to rise up to the Nightmare and Ultra Nightmare graphics settings. Take a look at our other Graphics Options article for details on specific option VRAM requirements. 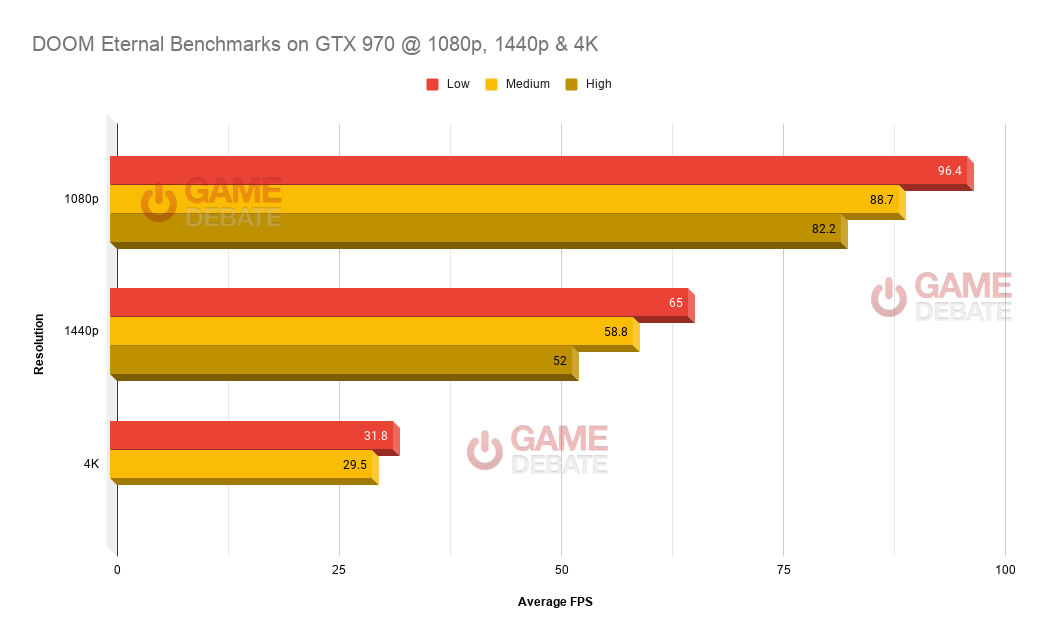 Ah, the GTX 970. I think we can all agree that when the recommended requirements for 60fps at 1080p said to set all the settings to Medium on a GTX 970, we all got a bit worried. But it's safe to say that the Nvidia ASUS GeForce GTX 970 does a pretty good job at 1080p. Whilst you may not be able to reach those Ultra settings due to the lower VRAM available, getting 80+fps on high at 1080p is such a relief and DOOM Eternal plays and looks great regardless on the GTX 970. Those of you with the 970 who were worried about their performance, don't, it's got this. 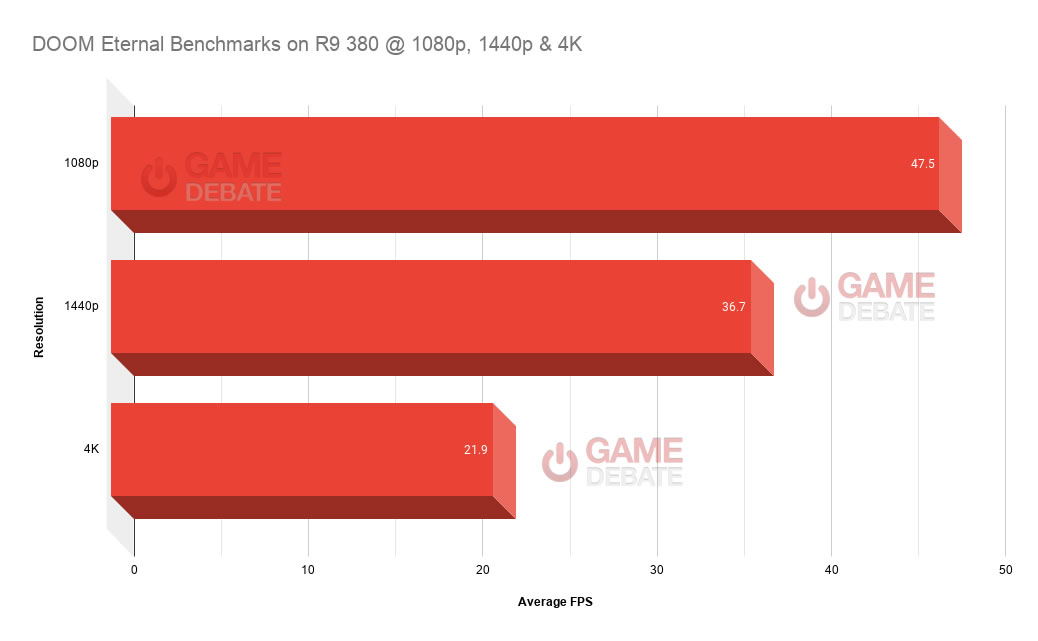 Immediately you'll notice the lack of average fps numbers here. That's because the R9 380 only has 2GB of VRAM available and as we learned before, DOOM Eternal wouldn't allow us to set the quality settings any higher than Low. Unfortunately, if you have one of these cards, you're going to have a tough time at 1080p, let alone any higher resolution. However, DOOM Eternal is quite a reasonable looking game in Low graphics settings and with 47.5 avg FPS the R9 380 is still just about ok to play it. You can always lower the resolution below 1920x1080 to get some extra frame rates. 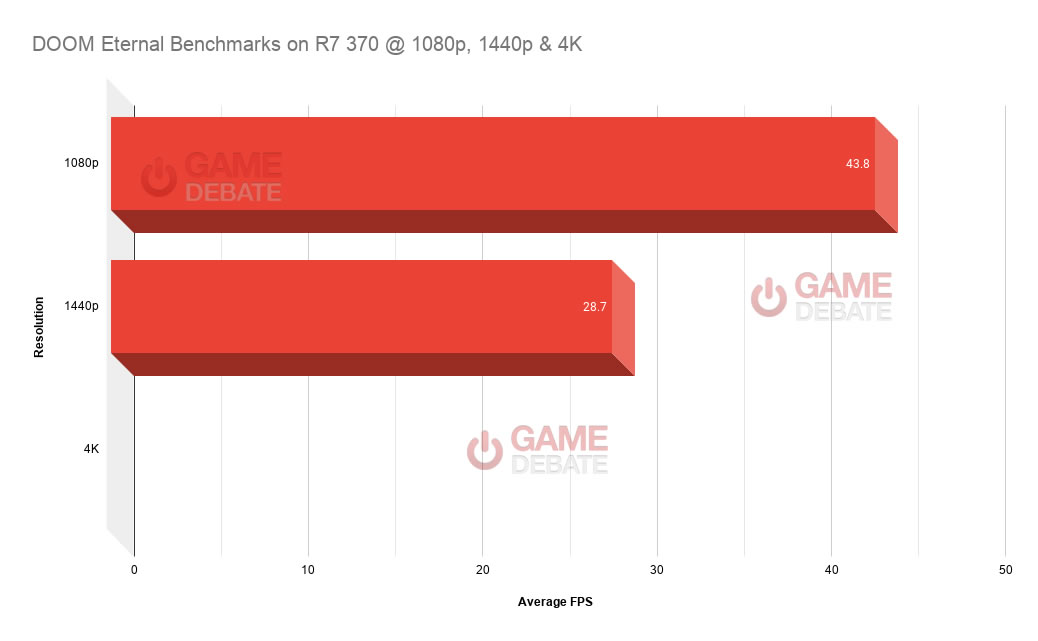 Just like above, only worse, the R7 370 only has 1GB of VRAM available. Interestingly, we couldn't set the resolution any higher than 1440p even with Virtual Super Resolution enabled, but we wouldn't expect it to be anything good... Even at 1080p this card begins to struggle.

So, as you can see, DOOM Eternal is a pretty demanding game, but not quite as demanding as those original system requirements first made us thought. Thankfully, the still-popular GTX 970 handles DOOM Eternal well at 1080p. Whilst the RTX 2080 truly shines with the RTX 2060 close behind. And a GTX 1070 is definitely powerful enough to get the most out of DOOM Eternal in Ultra 1080p.

It seems that DOOM Eternal wants higher video memory GPU's. And at times the chaos on screen is pretty insane. Its during those times that the GPUs can really strain, in the later game. But the future is still optimistic for the majority of cards in 1080p gaming, as we face the latest instalment of the DOOM franchise. If you want that 1440p gaming experience or even 4K, it might be time to upgrade that dusty graphics card. Hopefully by now you will have a pretty good idea of how well your system will run DOOM Eternal when it comes out. If you want to maximise your performance, then we suggest checking out the Most Important Graphics Options article to see which options are the most demanding.

On my PC on ultra preset Doom Etenal FPS is 180-250FPS believe or not. 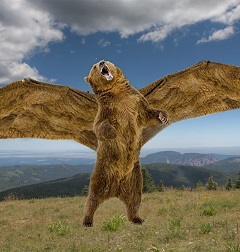 I'm curious as to why benchmarks for modern AMD cards like the 5700 XT/5600 XT, and newer Ryzen processors were skipped here.

There are benchmarks for even outdated Nvidia and AMD hardware, but nothing for newer AMD cards and the best price to performance CPUs on the market as of current (Ryzen Gen 3.) Given how well Vulkan will presumably run on said newer AMD cards, why exclude them?

Good question. We dont have one of those cards to test. I will see what I can do.

Thank you for the honest reply, and for what it's worth I wasn't trying to be critical; I was just legitimately confused at the specs chosen.

good optimization. i have a 1080p monitor with 144hz. i think am good max settings

This game not very cpu intensive as compared to lets say AC:Odyssey

So I have something odd going on with my system when I try the drm free version.. it loads up 5 threads at over 90% and all the others are under 40%. Normal version plays fine though.

@Xquatrox.. getting rid of the MegaTexture pipeline was a great thing for this engine.

Really nice optimization, so i guess i can achieve around 60 fps at 1080p?

When I get the game I'll fire it through my old gpus and some others from work and see what comes up.

seems to be very well optimised, stellar performance from the 1070

This is why i always say we need 8GB video cards even on just 1080p moving forward.I am pretty sure RTX 2060 suffered because of low VRAM.Glad i bought RX 5700XT instead of RTX 2060 because they both cost around the same in my country.

Nope... This whole "if it doesn't run on ultra settings, it's useless" attitude should stop. 4GB vram cards are completely fine right now. 6, too.

they are fine but i doubt someone would buy a rtx 2060 to play games on medium, so goal is to max out the game at 1080p

When people buy cards of RX 5700XT caliber for 1080p they intend to max out their games.So yeah 6GB VRAM is not enough!

I don't think it's hitting a VRAM limitation, otherwise we'd see a huge disparity between low and ultra, and we're not, it's only a 20fps gap..... there's no way you're going to tell me that 6GB VRAM is too restrictive for 1080P low in ANY game..... I simply won't believe you...... I think there's another problem happening here...... and I'm betting it's down to this individual GPU, it honestly looks like it's being starved of power and not clocking all the way up..... maybe a bad driver install

to clarify..... I think maybe the fact that he's not showing results for nightmare and nightmare ultra might could be VRAM related, but I don't think the poor performance in the other presets has anything to do with that.