L.A. Noire Part Two might be coming soon... We have some news that points to a hint of the game by way of how we get most leaks these days: a total accident. Part of the soundtrack to what is supposedly the sequel to Rockstar’s breakout investigative detective game, L.A. Noire, was spotted on Youtube. The song was listed under a Youtube channel called “L.A. Noire Part Two - Topic”.

Apparently, Youtube AI will automatically create “Topic” accounts for all sorts of things when they are coming out or have been already released. These Topic accounts have also reportedly leaked many music albums before they were supposed to be released. The channel has since been deleted after someone posted the link to the video online. For reference, here’s a picture of the video’s description: 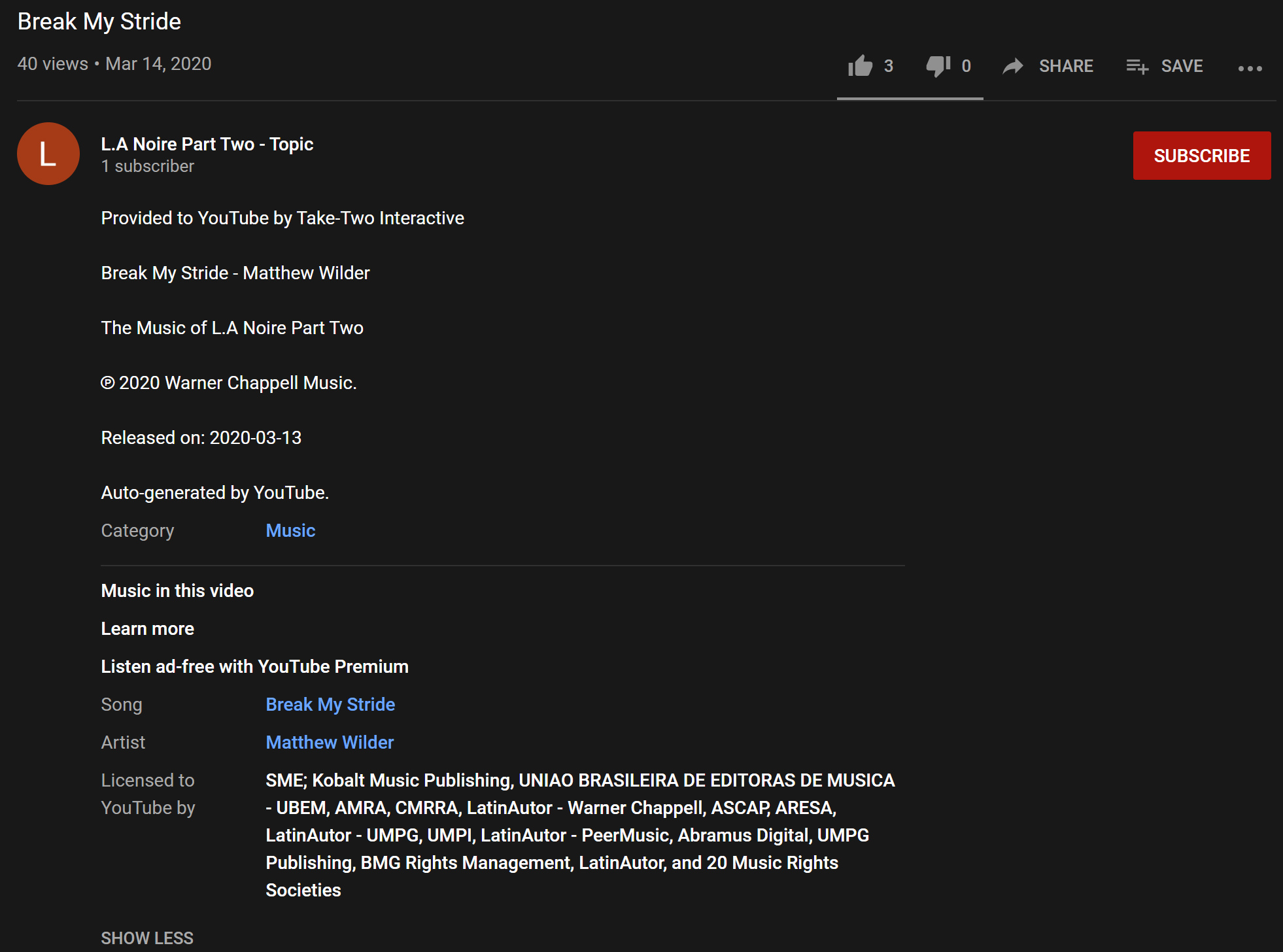 What’s interesting is that anyone could possibly call themselves Take-Two Interactive, but Warner’s copyright clearance symbol suggests that this was all done legally and not by a fake third-party.

Does this mean we will be getting an L.A. Noire Part Two? Probably, and the fact that the soundtrack has been cleared means that we might not have to wait that long before an announcement.  Could this have something to do with that job posting for an animator at Rockstar? We all thought that it was going to be Grand Theft Auto VI (and let’s face it, we still hope), but it could also be for a second L.A. Noire game? It might also have to do with that other job posting for a video editor, or maybe both job listings were for either games, who knows. Either way it looks like we’re a step closer to getting a second game in the series.

Are you looking forward to L.A. Noire Part Two? What would you like to see? New areas? New characters? An expanded interrogation system? Let us know your thoughts!

Is this proof that L.A. Noire Part Two is coming?

I reallllly liked the original i have replayed it a lot of times, and i still need to use a guid from internet

how do u continue a game where the story is over? for a new game u will need a new character and hence it won't be a part 2 but rather a new story...
this isn't to say that im not happy about it but i hate when they milk the story... just make a new one with a different name ffs

After releasing a remaster of the original, followed by a VR version, it was clear that Rockstar still had an interest in L.A Noire. Its not suprising to hear rumors of a sequel being made.

Damn, I really hope it is true, LA Noire isn't for everyone and I respect that but it kept me grounded to my seat while solving the cases. The investigation part is thrilling but the shooting was meh and unecessary IMO.

Didn't enjoy the first that much to even progress past the first chapter(s). Slow paced. Hope it's not impacting/delaying any possible GTA 6 development.

Not everyone's cup of tea, but one of the best entertainment pieces in all of human history in my opinion

One of my biggest gripes with it was, in fact, the 30hz limit. It was a pain to play at 30 FPS and the 60 FPS mod was just ruining the engine. Not my cup of tea, but if it had proper support I'd have lived through the game. I tried. It's definitely not a bad game.

my main complaint wasn't even that, it was that sometimes the things you had to look for were way too subtle, so you would still get things wrong, and like if I saw something that hinted they were lying, and I doubted, they'd be telling the truth.

bt123456789 i think that being able to have mistakes like that was quite a charm. in real life you are never sure too. i think it have the game more realism, but yah it was annoying as hell

yeah, I know it was for more realism but still sucked since you had to be perfect to get 5 stars.

I love this poll.