Well, Half-Life: Alyx is finally here. It’s been 12 years since we last got a new Half-Life game, and as most of us know, this one is VR-exclusive. While most people who have a VR headset are likely to go and buy a big hit game like HL: Alyx (nice move, Valve), not everyone is going to get the expensive VR hardware required to run the game, especially without first checking if their hardware can run it. So, we are going to take a look at some of the expected PC performance that Half-Life: Alyx gets in these frames per second benchmark results, across a few of our graphics cards…

Gaming in virtual reality is pretty sexy but comes with a huge price tag, which presents a big barrier to most of us. This in turn stops developers making games for VR because not enough people have the hardware that would then buy their games. And although its pretty obvious that Valve have released their next Half Life game to help flex the potential muscles of the VR game space, it is also intended to give their own VR headset, the Valve Index a sales boost (another good move, Valve).

As performance is significantly influenced by the number of those beautiful little pixels our GPU's are rendering, our HL: Alyx VR benchmark FPS listed below will be higher compared to running Alyx on a higher resolution Valve Index.

But first, let’s quickly take another look at those Half-Life Alyx system requirements…

Okay, now we can get to the good stuff! What GPUs did we benchmark with? We used the Nvidia ASUS GeForce GTX 970, Nvidia MSI GeForce GTX 980 Ti, Nvidia MSI GeForce GTX 1060 (which is the minimum graphics card spec listed above), a Nvidia PNY GeForce RTX 2060 and an AMD MSI Radeon R9 380. These were all done with a core i7-3770K and 8GB of ram. The minimum specs for the processor is an i5-7500, which is pretty much similar to the i7-3770K, however the 8GB of ram is just under the required 12GB, which may account for some of the anomalies we see in the FPS results below, but other than that we didn’t really see much of a performance hit due to the lack of ram on the higher-end cards. We will do some further benchmark testing with other RAM setups at a later point, but went for 8GB RAM for now because that is what we had and it seemed most popular in our visitors lower end PC systems. 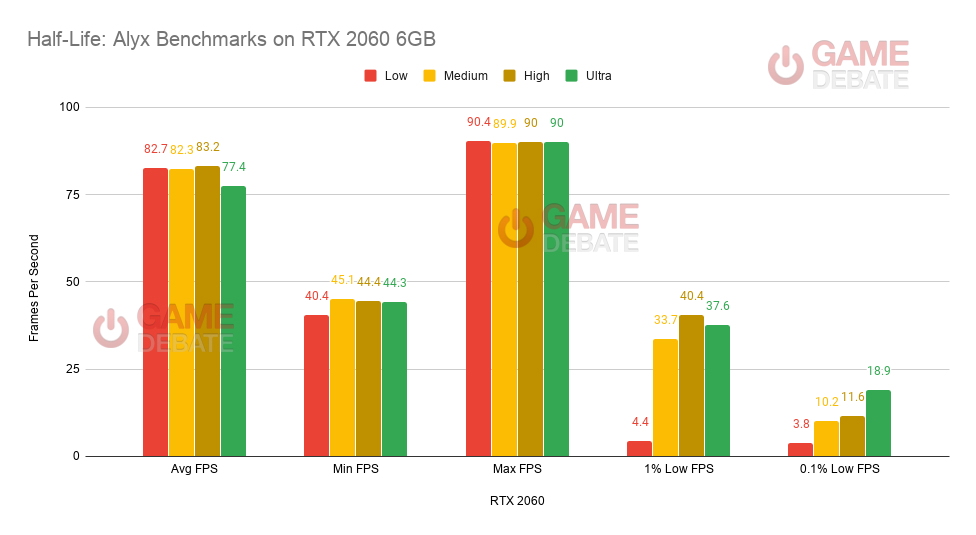 The RTX 2060 did an okay job running Half Life Alyx. Whilst it did achieve consistently high avg framerates on Low Medium High and Ultra, they all seemed to sit around the same FPS mark. There were also a few noticeable stuttering and lag moments, that were seemingly unconnected to whether it was running on Low or Ultra graphics settings. So we suspected another graphics card limitation was being reached on occasions. However, overall the RTX 2060 delivered a reliable and good experience in VR while running Half Life Alyx VR. We would recommend either High or Ultra graphics settings for the RTX 2060. 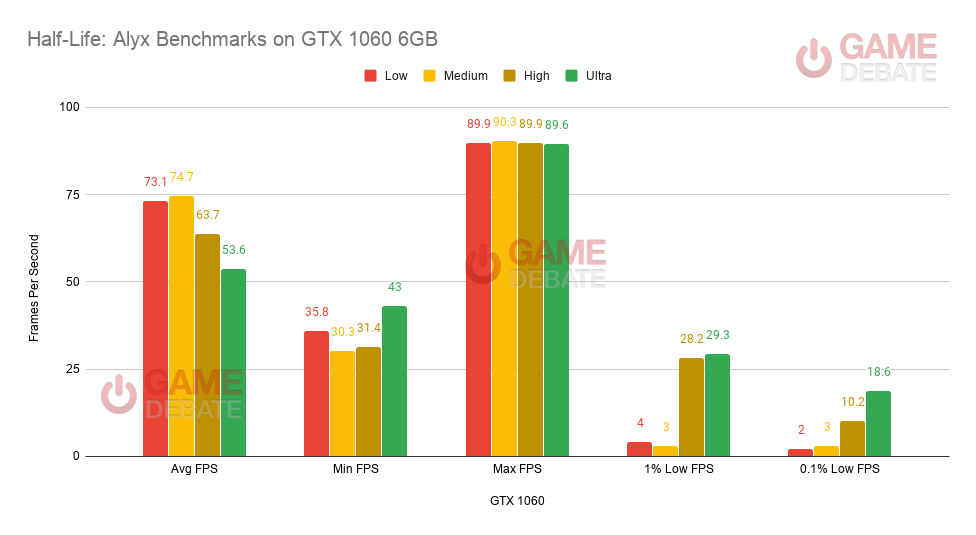 As you will see the Nvidia GTX 1060 is the graphics card listed in the minimum specs for Alyx and we were really pleased to say it handled Half Life in VR pretty well. You could definitely set Alyx on Medium settings with the GTX 1060 card and enjoy a reliable FPS experience. If you put the graphics setting to High or Ultra we noticed an occasional stutter. Weirdly, again the 1% and 0.1% low results above do not quite support our in game experience and they seemed like an anomaly in Low and Medium settings. 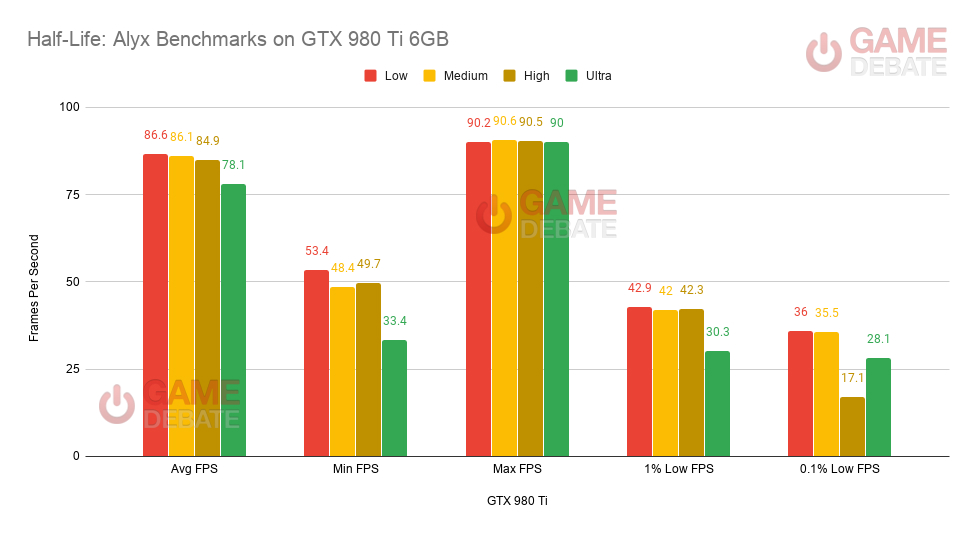 The GTX 980 Ti 6GB performed very well. There was hardly any stuttering and it ran very smoothly. This is definitely the star card out of everything that we've benchmarked here today. Chuck this one on Ultra settings and you'll find no issues. We put this down to the higher cores, TMUS, ROPS and Bus width that the 980 Ti has over the other cards in our list. 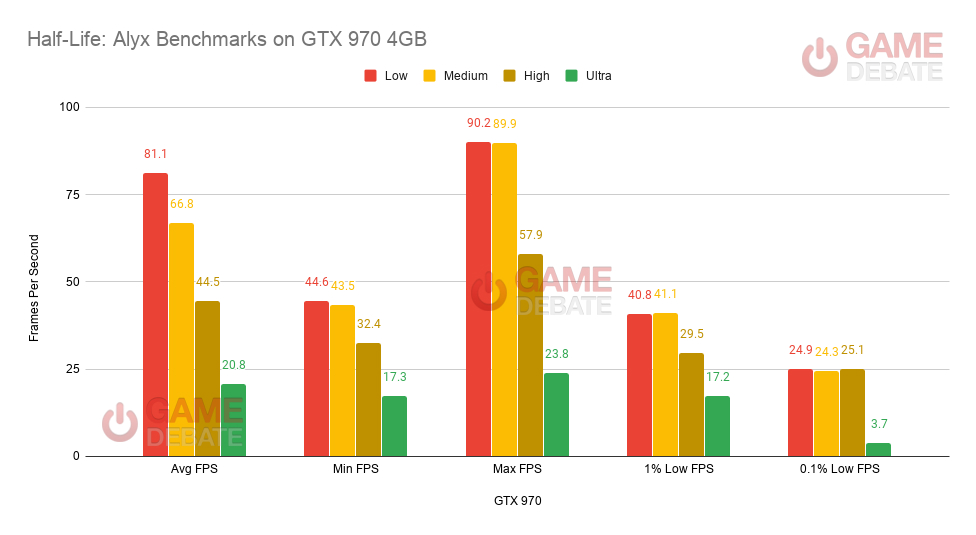 Next up we have one of the most popular cards of the now old 900 series GTX 970 4GB. This card could handle Low settings pretty well, but it was immediately clear after increasing the graphics settings how much of a performance hit there was. Whilst you could technically play Half Life Alyx with a GTX 970 at Medium settings, I would recommend keeping it on Low for those extra few frames to keep yourself from getting any headaches or motion sickness in any particularly demanding moments. But, this old GTX 970 card can just about run HL Alyx. 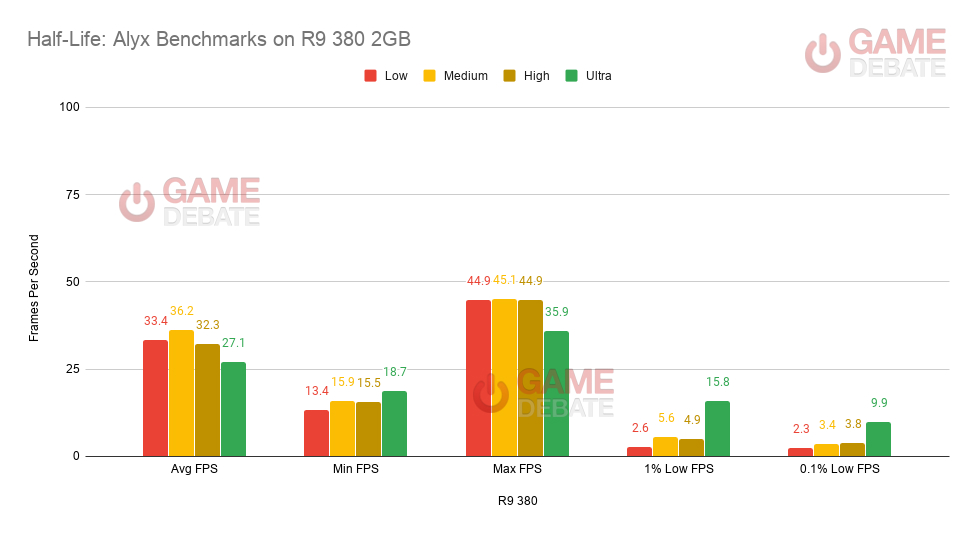 In all honesty, the AMD Radeon R9 380 can not run Half Life Alyx. The game was pretty much unplayable on any graphics setting. And while it technically managed to run the game, you would have to adjust your definition of 'playable' to consider playing it with a card of this sort of performance, as it would likely give you headaches and possibly make you feel sick if you tried.

So right off the bat we can see that Half-Life: Alyx, much like the recent DOOM Eternal, requires a hefty amount of VRAM in order to take full advantage of those higher graphical fidelity settings. But the GTX 980 Ti managed to shine here. It was the best card out of our 5 for running Half-Life: Alyx for sure, with the most consistent average FPS as well as the least amount of stuttering and lag. As we mentioned it seemed to be because of the higher respective number of cores, TMUS, ROPS and Bus width the GTX 980 Ti has, compared to the RTX 2060 and GTX 1060.

If you want to play Half-Life: Alyx at it's very best, you'll need at least 6GB of VRAM. Whilst we would recommend going for the 12GB of ram if you can, we found that the 8GB was perfectly fine running Half Life Alyx, especially when accompanied by the higher-end graphics cards.

We hope this helps give some early insight into the sort of PC performance we can expect from Half Life Alyx across a range of graphics cards and will do our best to test more GPUs over the coming weeks. As always we are all going to be interested to hear if you think HL Alyx is ace, or if you are now tempted to try VR, or perhaps you will hold off until the initial VR headset costs come down a bit.

“Not really. Them delaying this close to launch is an indicator the game isn't quiote ready yet and a...” - PhenomFaz

“Its a live service so no surprise there. After all live-service games adhere to their divine doctori...” - PhenomFaz

“But them delaying kind of contradicts what you are saying, no?” - ChrisZA

“Finally, the game's official system requirements were updated here on game-debate! They have been ou...” - AngerXyro

Happy to report no issues here on Samsung Odyssey Plus ultra settings at 90FPS with SS at 150%. Great game!

There is a blatant bottleneck caused by the CPU; this test fails to benchmark the real potential of the GPUs.

My rig hasnt dipped below 80 during my playthough(Rift S capped at 80), im not far into the game but it seems to be handling it pretty well.
Im a little disappointed with how your hands interact with the world, but the game as a whole is great.
8/10 would recommend.

30fps in VR would make you projectile-vomit all over your room, so I don't think it's a good card for the game whatsoever... No win here.

The 8GB VRAM is good for some demanding games with Ultra Textures.

Yeah, but you're not going to play demanding games with that card anymore, obviously. Unless everything is on low and textures on ultra. Don't get me wrong, I like a lot of VRAM, but the OP made it out as if playing a VR game at 13-30fps is proof of longevity somehow... I'd say at that framerate you're more likely to vomit all over the place.

urghh...that vomit game play will fair better than its direct competition with lower vram, definitely is going to perform slightly under GTX 1060

Since you tested 4 Nvidia cards and only 1 AMD card, could u extend this to 3 more AMD cards?

So my poor gpu can not run the game.

Nice analysis, good to see that my gtx 1060 can handle this game