Mount and Blade 2 has galloped it's way to us finally, officially launch into Early Access yesterday. Lets see a variety of graphics cards and how well they run Mount and Blade 2 Bannerlord. We will compare FPS on Low and Ultra graphics presets to see the type of frame rates you might expect on your PC. 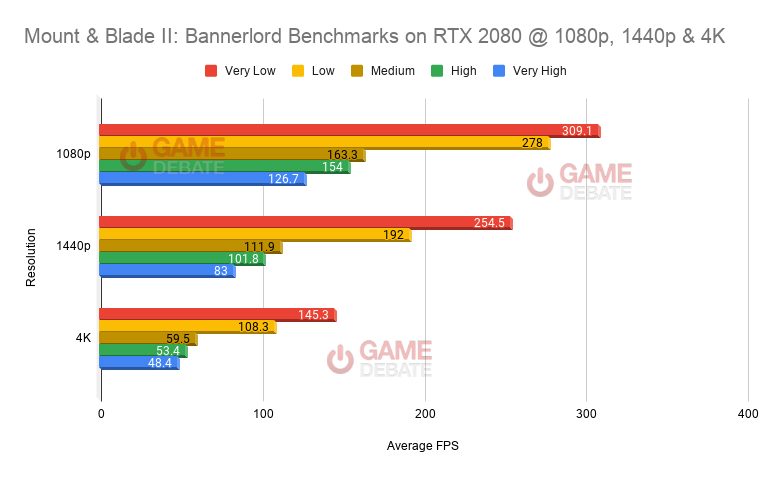 The FPS performance for a RTX 2080 is really good for Mount and Blade 2 Bannerlord. Not only does it breeze through 1080p even at higher graphics settings, but it can easily be played at 1440p at Very High. The 4K frames per second results paint a slightly different picture. While the results on Ultra/Very high settings are around the 50FPS mark Mount and Blade 2 is still perfectly playable at 4K with the RTX 2080. Overall, the RTX 2080 is a fantastic higher-end card for MB2 Bannerlord.

For reference the minimum was 43.4 FPS on 4K with the RTX 2080, which meant that it was still pretty consistent, with minimal stuttering. 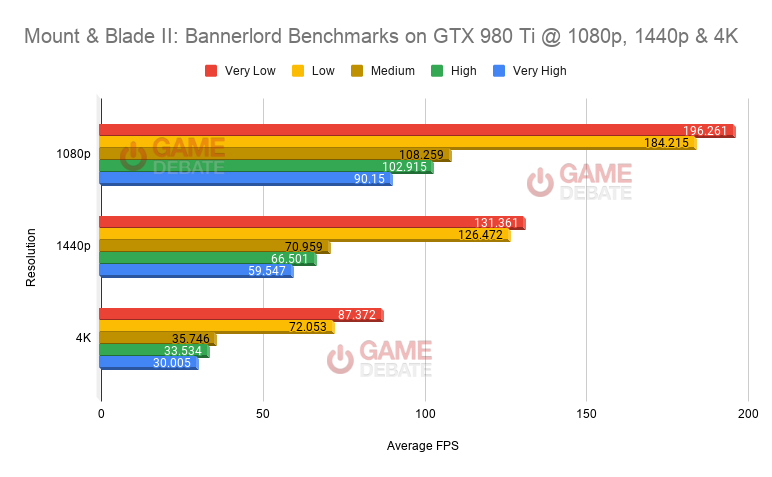 The MSI GTX 980 Ti does a pretty good job in FPS performance for Mount and Blade 2 Bannerlord. It can handle 1080p very well, even at Very High settings. It can also just about handle 1440p, chucking it on High will be absolutely fine, whilst Very High is still playable but will occasionally stutter. Again, 4K isn’t great at all on anything above Low settings. 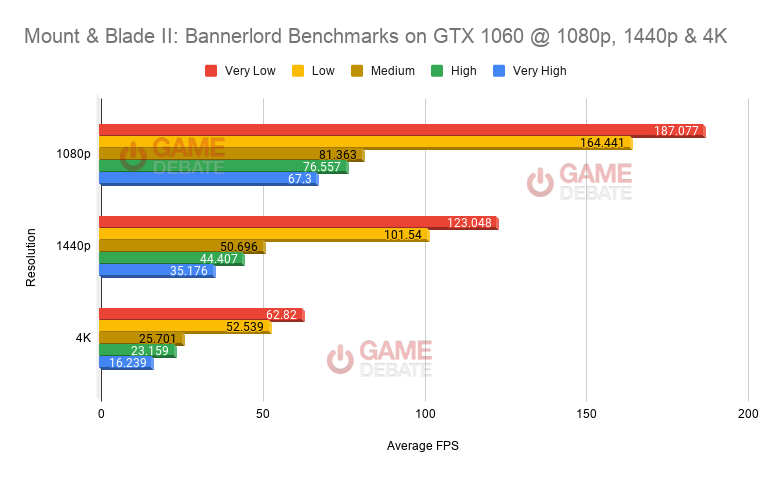 The MSI GTX 1060 is the recommended GPU for Mount and Blade 2 Bannerlord, and the FPS performance definitely shows it. At 1080p it can comfortably run at Very High settings, but as soon as you get to 1440p it will significantly drop in performance above Low settings, You might be able to get away with Medium on 1440p if you don’t mind the infrequent stuttering. But, nevertheless, the GTX 1060 performs really well at 1080p in MB2 Bannerlord. 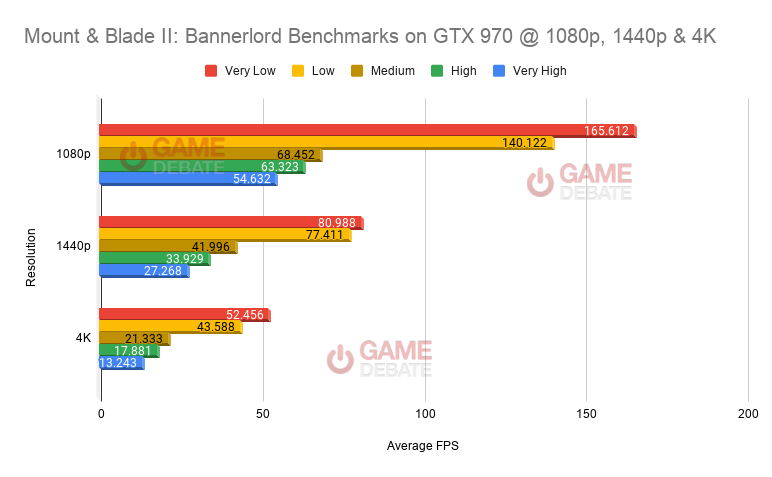 The FPS performance for Mount and Blade 2 Bannerlord on an Asus GTX 970 is just about acceptable on 1080p. You may want to stay on High settings in order to get buttery-smooth gameplay, Very High will tank a little but not much. 1440p is not preferable here unless you’re fine with only going as high as Low settings. Whilst 4K is unplayable above Very Low settings. A decent card on 1080p, but you will need to make some graphical compromises in MB2 Bannerlord for the Asus GTX 970. 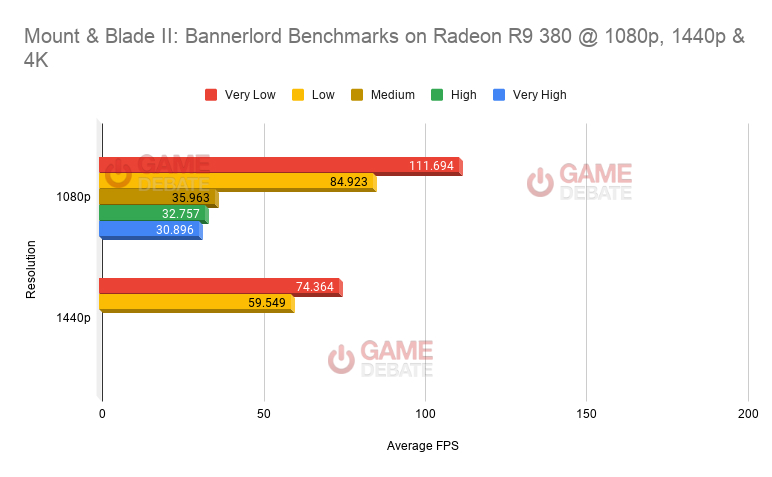 The MSI Radeon R9 380’s FPS performance in Mount and Blade 2 Bannerlord is surprisingly decent at 1080p under Medium settings. It is absolutely playable on Low and Very Low, and is even pretty good at 1440p. Whilst we weren’t expecting anything much, the MSI Radeon R9 380 can still perform very well at 1080p and 1440p on Low settings in MB2 Bannerlord. 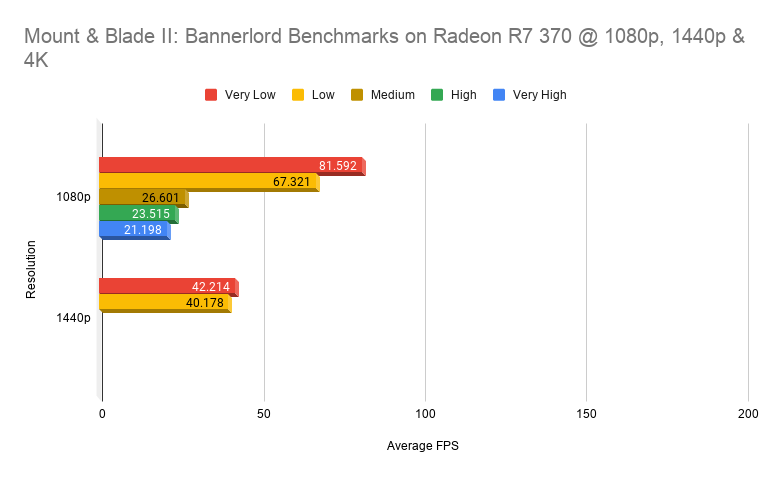 Finally, we have the FPS performance for the XFX Radeon R7 370 in Mount and Blade 2 Bannerlord, which managed to handle 1080p pretty well, same as the R9 380 above. However this one did not perform well at all on 1440p even at Very Low settings. So it looks like cards in the same performance category as the R7 370 will need to stay at Low settings on 1080p in order to perform well in MB2 Bannerlord.

What processor performance requirement will Mount and Blade 2 have on your CPU and does the screen resolution you choose affect your PC hardware bottleneck?

Looking into the hardware usage of Mount and Blade 2 we can clearly see the transfer of processing power requirements shifting over to the graphics card’s GPU, when you move from smaller to larger screen resolutions.

How we tested the processor bottleneck shifting to the GPU

To best showcase this M&B2 CPU resource transfer we ran some frame per second tests in a mass battle scenario. The battle had mixed unit types; cavalry, missile, footmen, and saw them charging across the grassy steppes to clash into the enemy. The mass battle had 500 units in total. Arrows flying around and horses charging into shielded infantry. Brilliant chaos. We set the graphics setting up to maximum, which is called Very High, in Mount And Blade 2.

You can see in the mount and blade 2 screenshots below that the test system we used to see this processor power performance analysis Intel i9 9900K processor along with the Nvidia RTX 2080 and 16GB RAM.

Screenshot 1 - shows the processor and our PC idling, before the game was loaded.

In the next processor performance screenshot we have the game running, initially on its home menu page. Then, where you see the big red arrow in the screenshot thats where the M&B2 mass battle has loaded at 1080p screen resolution and the hundreds of soldiers are lined up waiting for their orders.

Also on 1080p at max graphics settings, we can see that the GPU utilization momentarily maxed out during the initial battle loading and then settled at around 62% of the RTX 2080s performance capability. The RAM settled around 10.9GB usage at these settings in 1080p.

During the Mount and Blade 2 mass battle we swapped to a 4K screen resolution. You can see where the red arrow is in the CPU performance screenshot number 3, we marked this moment with another red arrow.

The RAM was still being used at around the 11GB mark on this system.

What are the second line in the CPU performance graphs of the task manager showing?

The kernel is mainly scheduling CPU time for processes. If the dark blue line is low, even though the light blue line is nearly maxed out, then the processor is transferring its load effectively and the game/computer will still feel responsive.

If you cast your eyes over the Low to Medium graphics setting results above, across all the cards, thats where we see the most significant drop in FPS. This will likely be due to one or two of the heavy hitting graphics settings that get switched up during Low to Medium settings, we will explore which graphics setting in particular is hitting the game hardest in another article. The other thing to note is that the game looks like cack in Very Low, but not so bad in Low. So if you are hunting for those extra FPS and your system is possibly going to struggle running Mount and Blade 2 then our suggestion is to switch it to Low (Not the Very Low graphics setting) and you should get the best performance while maintaining some of the nice visuals of Bannerlords.

Luckily the higher end cards hold up pretty well even after this performance drop, and owners of lower-end cards will be happy to hear that Mount and Blade 2 can at least run the game at a stable framerate.

Though by the looks of things, Bannerlord is a very well optimised game. Even if you have lower end cards you should definitely be able to run it, but we recommend that you put it into Low graphics settings. As is often the way with modern games, if you want 4K resolution on MAX settings, you are going to need a top end gaming PC.

if you are wanting to run Mount and Blade 2 in 1440p resolution then you will find it much more achievable across a number of the mid to high-end graphics cards, even at High/Very High settings. As a point of reference the recommended graphics card was the GTX 1060 and that gets a solid 50.6FPS at 1440p on Medium graphics settings, which looks pretty good.

As always, you can check out our other articles on Mount and Blade 2 Bannerlord's PC performance, including the Mount & Blade 2 PC Graphics Settings Revealed among others.

That cpu usage is very interesting, i wonder if you gain more fps by running 3900x or 3950x, seems like good bechmark for upcoming cpus.

Yeah i agree. Was a nice look into how this stuff works. I kinda liked the mini Kernel lesson stuff. Its one of the reasons i like Game-Debate. They get a nice balance with keeping the tech coverage to the point and not too complex

next time if you use task manager switch the graph to show every thread not just the average load on the cpu, it is much more informative i think

I imagine you probably also meant to say, "this is a great bit of Mount and Blade 2 coverage to share"
Thanks this was proper informative. I love M&B and been waiting to get it for years!!!

im sorry but was this a joke? flippy12

No, not a joke. Just wanted the author to know that its a great, really helpful article.
Tforulez, gave an interesting suggestion, but i thought it would also be lovely to point out how appreciated the article is.