We're a bit late to the scene, but here are the current PC system Requirements for Call of Duty Warzone, so this can be your one-stop go-to place for staying frosty about the latest updates regarding Warzone's PC requirements.

The free-to-play Battle Royale version of Call of Duty: Modern Warfare has taken the online competitive multiplayer shooter scene by storm, with over 30 million players signed up in just over a week after launch.

"Welcome to Warzone, the new massive free-to-play combat arena from the world of Modern Warfare. Drop in, armor up, loot for rewards, and battle your way to the top."

So here are the Official PC System Requirements for CoD: Warzone

The System Requirements listed here are actually pretty good. Aside from that daunting 175GB download size, the rest seems very well optimized for players. A GTX 670 for minimum and GTX 970 for recommended mean that this game should run pretty well on most systems. Though you will need a system capable of supporting DirectX12, as there's currently no support for DirectX11.

From initial testing we found that this was not the case though, and that CoD Warzone was not very well optimized. But it seems like the game either defaulted on startup to Fullscreen borderless, or there was a recent patch, as the performance has significantly improved recently. We'll be conducting our usual Performance Benchmarks for a more accurate answer and results though, so stay tuned for those!

Here are some other pc system specs released that shed some light on Ray Tracing rec specs.

So currently the entry level ray tracing capable RTX card is what you need to meet the ray tracing requirements of Warzone. We will test that soon.

Then they have passed through the Ultra Ray Tracing specs as well.

We are advised that these Ultra Ray Tracing system requirements will get the game running at 4K Ray Tracing with high Frame rates. We will also test this soon as well.

Now just to take a little look at that massive 175GB hard drive storage space requirement for Warzone, its actually not as big as that. Here is the loading screen which shows that Warzone in fact needs to install 84.80GB to your PC drive storage space, at least for the moment. 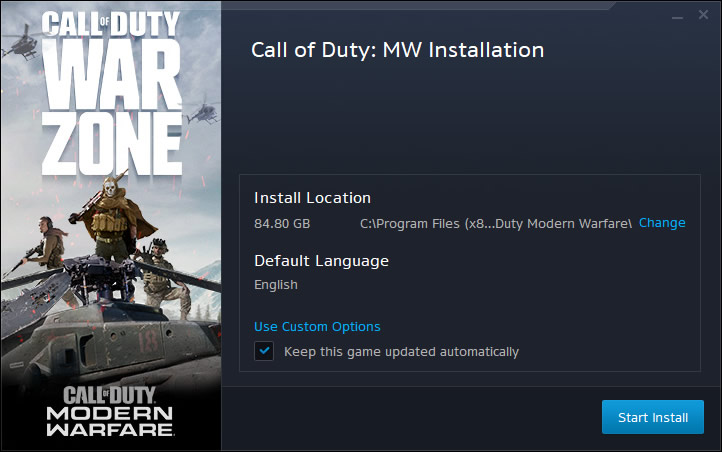 Call of Duty Warzone has been shaping up to be one of the biggest Battle Royale games of the moment, no thanks to it's incredibly well known IP, and the fact that it's completely free to play.

I think it's a better PUBG, my brother plays it on PS4 and keeps nagging me to download it, but now way in hell am I downing those 175GBs XD

On PC its about 83 GBs download If only warzone.

Oh, that changes things actually . Thanks!

I played i a little on lowest settings, but man, i had so many stutters, was mad. idk what was the problem, but for a competitive game like this, i could not take it....

is it posible that difference btw 1050 and 1080 are that big i mean i would have guess that 1050 would be able to do at least low 1080p 60fps, did you check your fps with some program like fraps or rivatuner as problem could be just a server connection

an extra 8gb ram and a 1650 super would do wonders

How can the download/storage size be that big while comparable games (example being Ring of Elysium, also a dead BR game) only require 20gb of storage?

i thing that this download you modern warfare as well, when i was playing it discord would say that i play modern warfare not the warzone same as when i would take a screen shoot it would be put into modern warfare folder

Hmm, kind of like how Payday 2 handles the DLC. You have them all, but only unlock them if you bought them. For compatibility reasons it's great, but it's just horrible.

I don't have a good internet connection so I just copied all the game files from my friend's pc to mine and it worked :)

So they "uncompress" the data to then compress it on your pc? Logics
(I know, it's jokes)