Call of Duty Warzone has made an absolute killing online, recruiting over 30 million players in just 1 week after launch it has already been one of the fastest growing Battle Royale games ever, no thanks to it's new free-to-play model. But how well does it perform? In this article we're going to test a variety of graphics cards and how well they can run CoD Warzone.

In this PC Performance article for Warzone, we will benchmark close to the official System Requirements listed below as well as a few others, then go through the FPS test results of each graphics card at each graphics setting ran at 1080p, 1440p and 4K screen resolutions. From there we can see the performance of the recommended system requirement graphics card and consider how well optimized Call of Duty: Warzone really is. 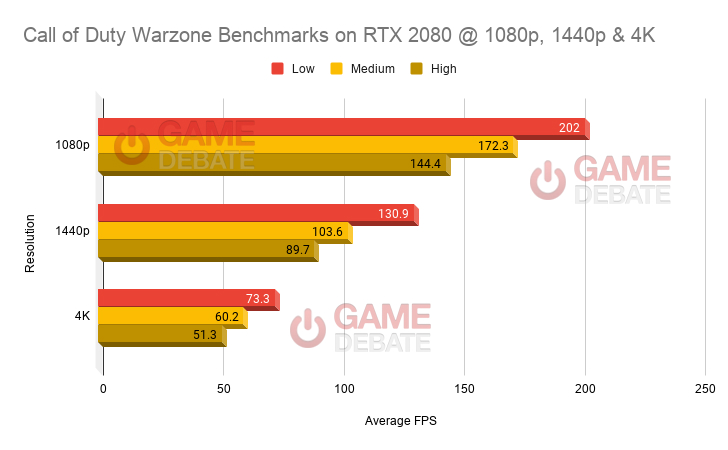 The FPS performance for an RTX 2080 is really good for Call of Duty Warzone. Unsurprisingly it handles 1080p really well, and even at 1440p it has little chance of dipping below 60fps. Not only that, but 4K gaming with an RTX 2080 on CoD Warzone is absolutely possible, though you might want to keep it on Low/Medium settings for those extra frames. But nonetheless, the RTX 2080 is a fantastic card for playing Warzone at a stable fps on 1440p, or for a very high framerate at 1080p. 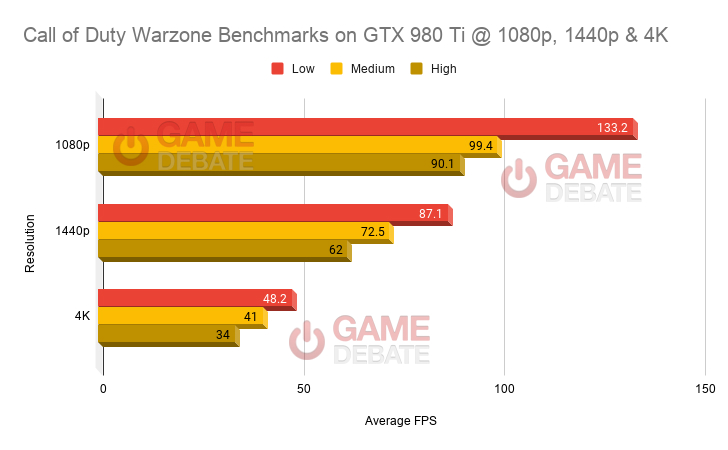 The MSI GTX 980 Ti does a really good job in FPS performance for Call of Duty Warzone. At 1080p you can easily put the settings up to High and see stunning performance. You can even push it to 1440p at High settings, but probably best in that case to keep it on Medium for those moments where extra frames are absolutely necessary. 4K is definitely playable, but for a fast-paced competitive multiplayer shooter, it's not recommended on this card. 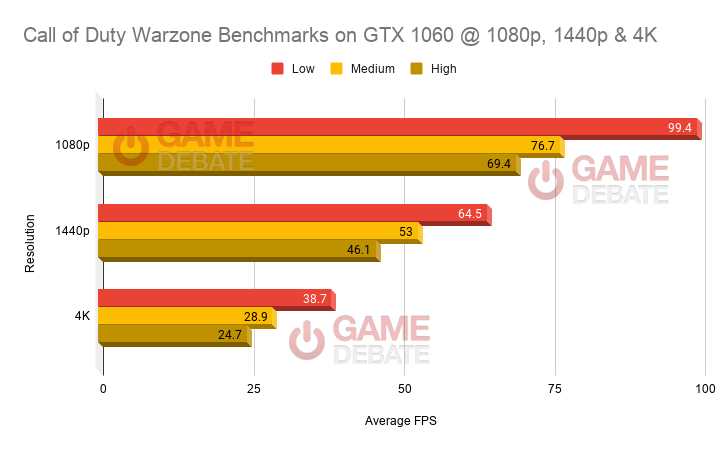 The MSI GTX 1060 is a pretty standard GPU and runs relatively well for Call of Duty Warzone. At 1080p you can easily chuck on High settings and see stable performance still. At 1440p your best bet is to keep it on Low for those extra frames, but you can definitely put it on Medium if you really want that higher quality. Again, 4K is not preferable here. Due to the low framerate you will almost always have a complete disadvantage in close-quarter battles when playing Warzone. 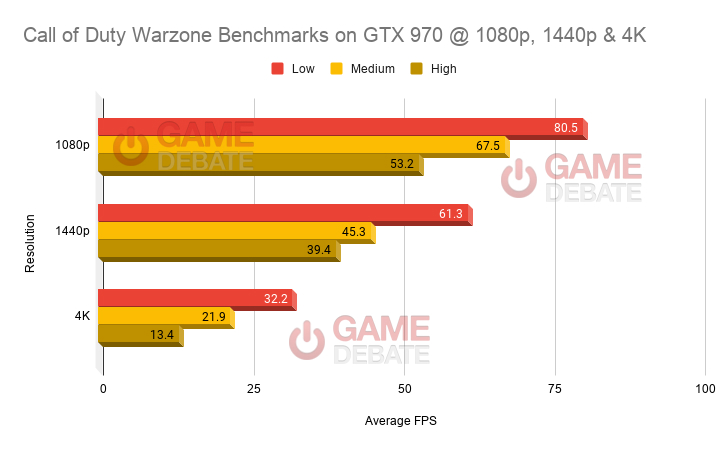 The FPS performance for CoD Warzone on an Asus GTX 970 is just about acceptable on 1080p. You might want to keep it on Medium settings at 1080p for optimal performance, you can push it to High if you really want. Same as 1440p except keep it on Low settings. 4K is definitely unplayable here, 32fps is not preferable for an online competitive multiplayer shooter. 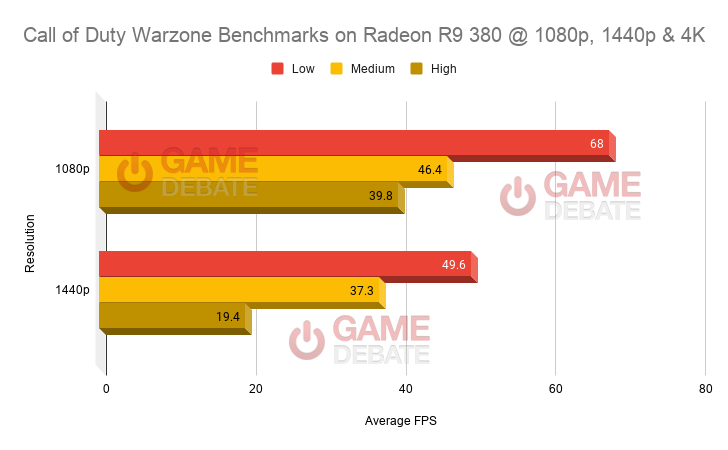 The MSI Radeon R9 380’s FPS performance in Call of Duty Warzone is surprisingly alright. Granted you probably should keep it on Low at 1080p and not go any higher, but even in light of that, 68fps is really good for the card on a game like Warzone. You can definitely play Warzone on at least a stable framerate at 1080p.

So what does this tell us? Well, looking over the results above, we can safely say that Call of Duty Warzone is currently pretty well optimized for all sorts of cards. The fact that the 2GB Radeon R9 380 can achieve above 60fps on Low settings at 1080p is really good. And the ability to play 1440p whilst still getting stable framerates with a 980 Ti on High, or a 970 on Low, is also pretty damn good.

To get Warzone running stable at a 4K resolution on MAX settings will be much tougher, and you'll need a top-end PC for that kind of performance (though, no surprise there as most other games are like that on 4K). The RTX 2080 should do just fine, but you may have to keep it at Low/Medium settings to reduce chances of stuttering or dipping below that golden 60fps.

If you want to run CoD Warzone at 1440p resolution, you'll at least it much more achievable with mid to high-end graphics cards, even at Medium/High settings.

As a reference, the recommended GPU for Call of Duty: Warzone is a GTX 970, which gets a good 67.5fps at Medium settings on 1080p. It's not quite High, but it's close. On the opposite end, the minimum card required is a GTX 670, so you are more than likely to at least run Warzone at 1080p on Low settings if you have a lower-end GPU.

As always, you can check out our other articles on Call of Duty Warzone's PC performance, including our Low vs Ultra Graphics comparison and Most Important Graphics Options, when they become available.

I am running my Warzone on 2x GTX980 on max graphic settings in 1080p and runs very smoothly with lowest 42 fps and average about 80. Although, COD settings shows all demands in red as well over recommendations, but reality is much different then system demands. I have never understood the reason why the game demanding much more then actually need it to runs smoothly, but if I would require over 100 fps or 4k then 2 980's is definitely not enough. The same with Far Cry 6 but there I have easily 100fps on max details and 1080p. The GPU temp is stable 41°C on my water-cooled 5 years old self-build.

Unfortunately in my situation the game crashes, (closes by it's own after some minutes) and throw me back to desktop.

Same here ..Disk read error ...tried every solution there is ..

crap epic luncher, problem here too.
such waste of time and money...

update: I found out with a few searches that problem happens when you pause your download at certain points in epic luncher. so download it in one run or download a full unlock version should fix it.

use a different launcher