We benchmarked everything with DirectX12. If you want to know the difference in FPS performance for both DX11 and DX12 in the RE3 Remake, then you can check out our comparison article, when it becomes available. For reference, if you want to use DX11 then expect slightly less performance across the board (for now, I would guess somewhere around 10% performance loss).

Also, as a side note, all the graphical presets in RE3 have different names than usual: Performance Priority, Balanced, Graphics Priority and MAX. For simplicity I have called these Low, Medium, High and Ultra in the results below. 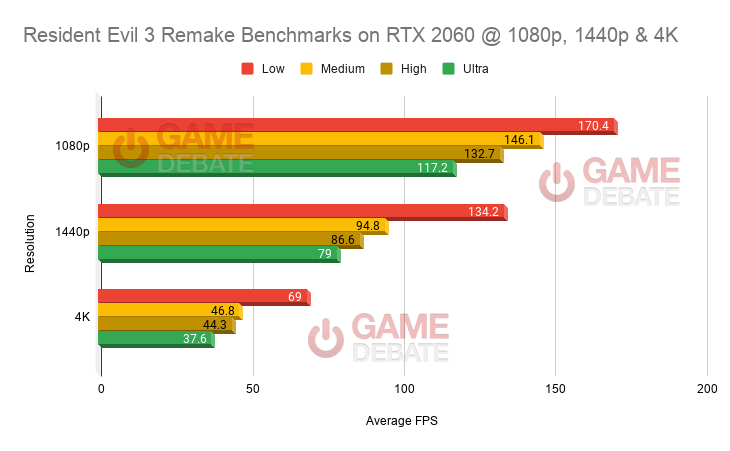 The FPS performance for an RTX 2060 is really good for the Resident Evil 3 Remake. At 1080p this card gets great performance, even on Ultra settings. If you like to play on 1440p, then luckily this card breezes through even on Ultra settings. 4K is definitely playable at Low settings, but any higher than that and you might be giving out more free hugs to zombies as they pull your intestines out through your neck. Overall though, the RTX 2060 gets great performance for 1080p and 1440p in the RE3 Remake. 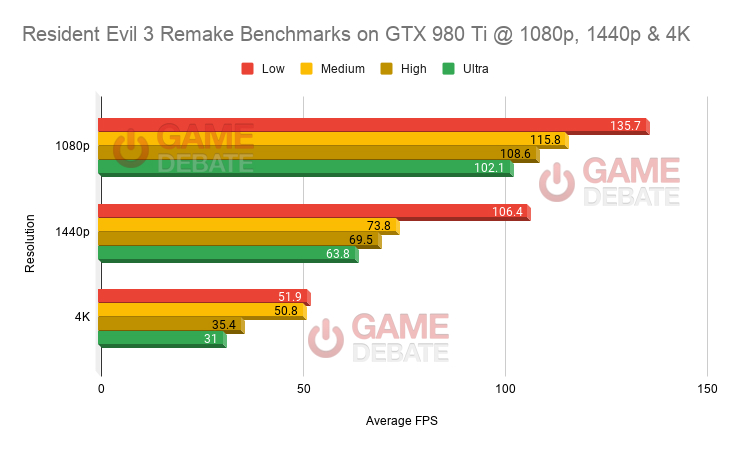 The MSI GTX 980 Ti does a really good job in FPS performance for the Resident Evil 3 Remake. This GPU can easily handle 1080p at Ultra settings. Though you can bump it up to 1440p, but might want to leave it on High settings to make sure there's no stuttering. 4K is playable at Low settings, but occasionally drops frames, which can cause immediate frustration when you're surrounded by flesh-hungry zombies. Either way, the GTX 980 Ti performs really well in the RE3 Remake at 1080p on Ultra settings, with 1440p recommended at High settings. 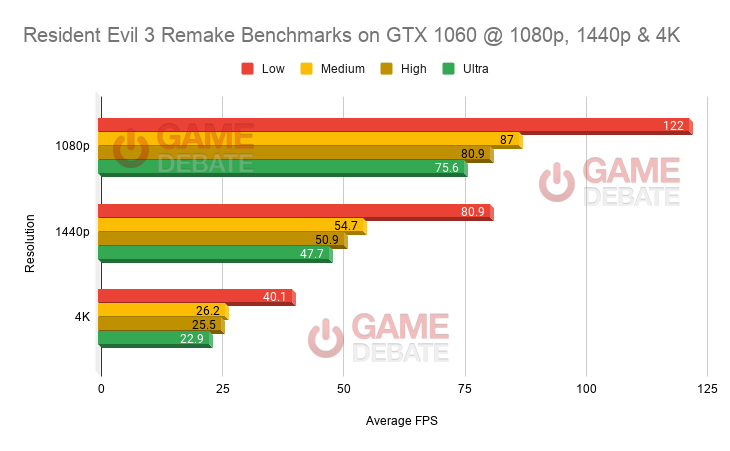 The MSI GTX 1060 is a pretty standard GPU and is even the recommended graphics card for the Resident Evil 3 Remake. It actually runs really well here, going beyond 60fps even on Ultra settings at 1080p. If you want to play at 1440p you can most definitely on Low settings, if you really want to you might be able to chuck it on Medium/High, but then you might see your accuracy be negatively affected. At 4K the RE3 Remake is absolutely unplayable any higher than at Low settings, I found myself dying quite a few times trying to get these results here. But overall, the GTX 1060 gets great performance in the RE3 Remake on Ultra settings at 1080p. 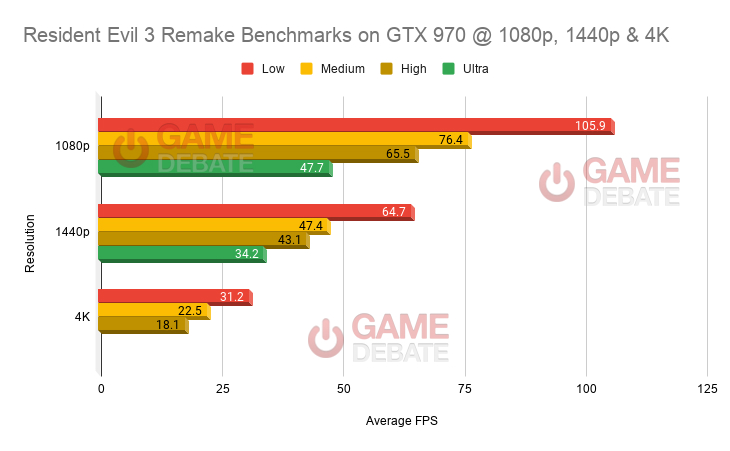 The FPS performance for the Resident Evil 3 Remake on an Asus GTX 970 is just about acceptable at 1080p. Whilst you can play on Ultra settings here, you may want to keep it on High to stay above 60fps and not have any stuttering/framerate issues. 1440p is okay, but only at Low settings, any higher and you'll see a significant reduction in performance due to screen tearing/stuttering. 4K is a no-go here, in my opinion. In the end though, the GTX 970 gets very acceptable performance on 1080p at High settings.

If you're wondering why there's no result for Ultra settings at 4K resolution, that's because the game kept crashing on me whenever I set it to MAX settings. So that should pretty much tell you all there is to know about gaming in 4K on the GTX 970 in the new remake of Resident Evil 3. 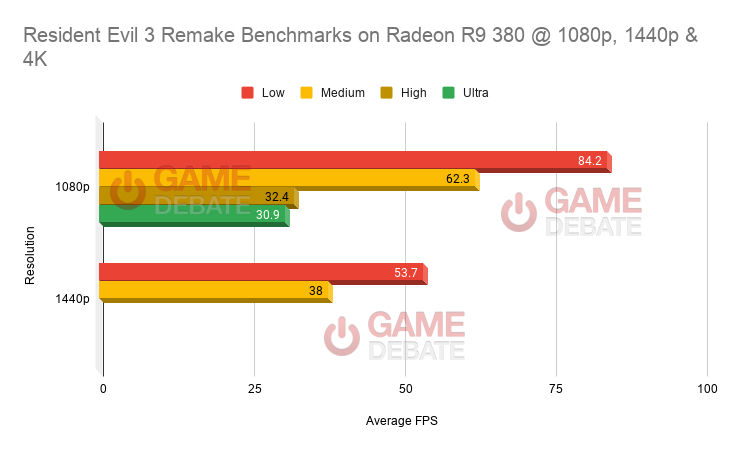 The MSI Radeon R9 380’s FPS performance in the Resident Evil 3 Remake is surprisingly alright. Even with low VRAM, the game runs smooth at Medium settings on 1080p, any higher and the performance cost is quite drastic (most likely due to the VRAM limitations). If you really feel like it, you could probably play at 1440p with Low settings, though you may encounter a lot of stuttering in this case. In the end, the Radeon R9 380 can definitely run the RE3 Remake pretty well at Low/Medium settings on 1080p.

Note: The Radeon R9 380 could not handle DirextX12 and just kept crashing no matter what. So the results here are from running the game in DirectX11 instead, as it was the only way to get the game running.

So what do these results tell us? It looks like the recent Resident Evil 3 Remake is pretty well optimised, with most cards getting 60fps with desirable graphics settings on 1080p resolution, with some able to get great performance even at 1440p. Both the GTX 970 and GTX 1060 get good performance at High/Ultra settings. Whilst it may seem like 4K gaming is still a while away, the RTX 2060 and GTX 980 Ti both can get stable framerates at Low/Medium settings.

The recommended GPU, a GTX 1060, absolutely gets the desirable performance the system requirements mention, even going above 60fps on Ultra settings. With lower-end cards even having a chance of running the game at a stable fps on at least Low settings.

As always, you can check out our other articles on Resident Evil 3 Remake's PC performance, including our Low vs Ultra Graphics comparison and Most Important Graphics Options, when they become available.