In what might be a rather brilliant move by Infinity Ward, new measures being deployed to Call of Duty: Modern Warfare and Call of Duty Warzone this week ensure that hackers will be forced to play together in the same matches. The news comes shortly after console players were being forced to disable crossplay to reduce the risks of coming across any cheaters online from PC.

Just to be clear though, these are real cheats being used and not just console players complaining about keyboard & mouse setups. These hackers are using several different cheats to gain an unfair advantage against players, including aimbot, reduced recoil, and the ability to see and track enemies through walls.

Infinity Ward’s response to this has been pretty clear, after banning 70,000 players already for cheating, they are still committed to adding new and improved security features: starting this week, players who report on suspected cheaters will receive in-game confirmation that the player has been banned. Additionally, there are now more dedicated security updates, increased resources for Backend Tech, Studio, and enforcement teams. 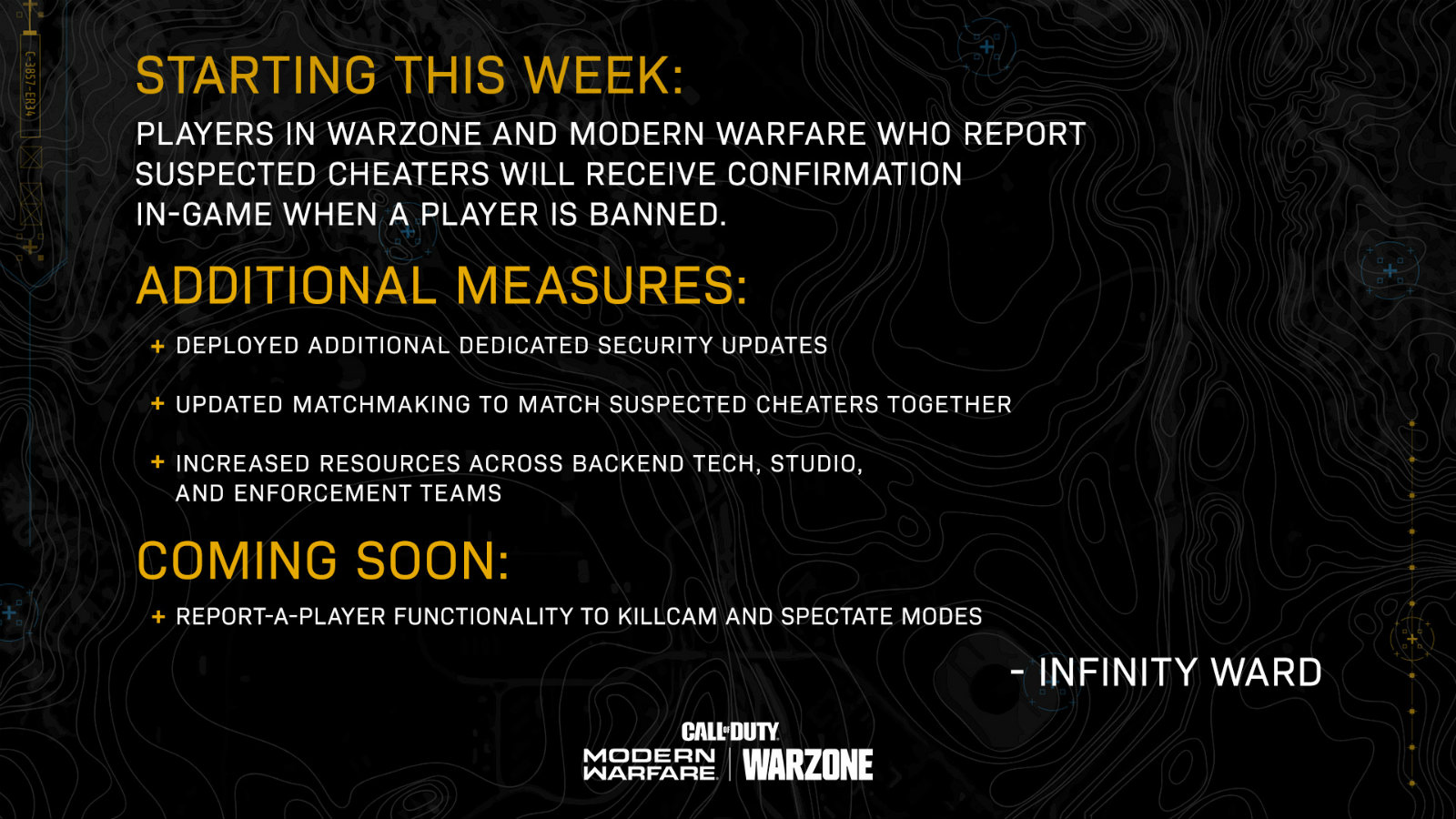 But what’s most brilliant is the fact that Infinity Ward will be pairing suspected cheaters together in online matches. There are no details as of yet to reveal how a player is categorized as a “suspected cheater”, but it could provide a useful way of at least moving those who are most suspicious into a lobby away from those who are not cheating, if only to ban them at a later date. It could also mean that suspected hackers are discouraged from playing, as they will be up against other cheaters.

The long-awaited report-a-player functionality has been confirmed by Infinity Ward, however it will only be added to Killcam and Spectator modes in the future. But for now it looks like the developers are clamping down on the rampant hacking that many players have reported since the game launched, especially in CoD Warzone.

What do you guys think? Is it a good idea? Will this be an effective way of dealing with hackers/cheaters in multiplayer games? Let us know what you think!

If they all use the same hacks it's fair.

If these hacks were used IRL, they'd be called a tactical advantage.

The express purpose of a real war isn't to be fair and balanced.

I find it amusing how ppl that play "war games" are obsessed with fair killing.

It might be a good solution, it is very difficult for free games to counter hackers.

COD is not Free