Assassins Creed: Valhalla is the next game in the AC universe - trailer drops tomorrow

It’s official, in a live event hosted by all the various official Assassins Creed Social Media pages, the developers teased the setting of the next brand new Assassin’s Creed game by… a live Photoshop drawing? We have to say this might be the strangest teaser we’ve seen for a video game yet. Anyway, whilst playing some intense music from the various Assassins Creed soundtracks, the drawing depicted a lone character caught between two different landscapes. Yep, that's right, the next Assassins Creed game is set in not just one, but two locations it seems!

However, the painting also revealed a second location, which looked mysteriously a lot like Corfe castle in England, which makes sense considering that vikings notoriously invaded England. So will we be able to travel between both locations? It sure seems like it. Additionally we even got a juicy reveal of the official world premiere trailer that's happening tomorrow at 8AM PDT / 5PM CEST: 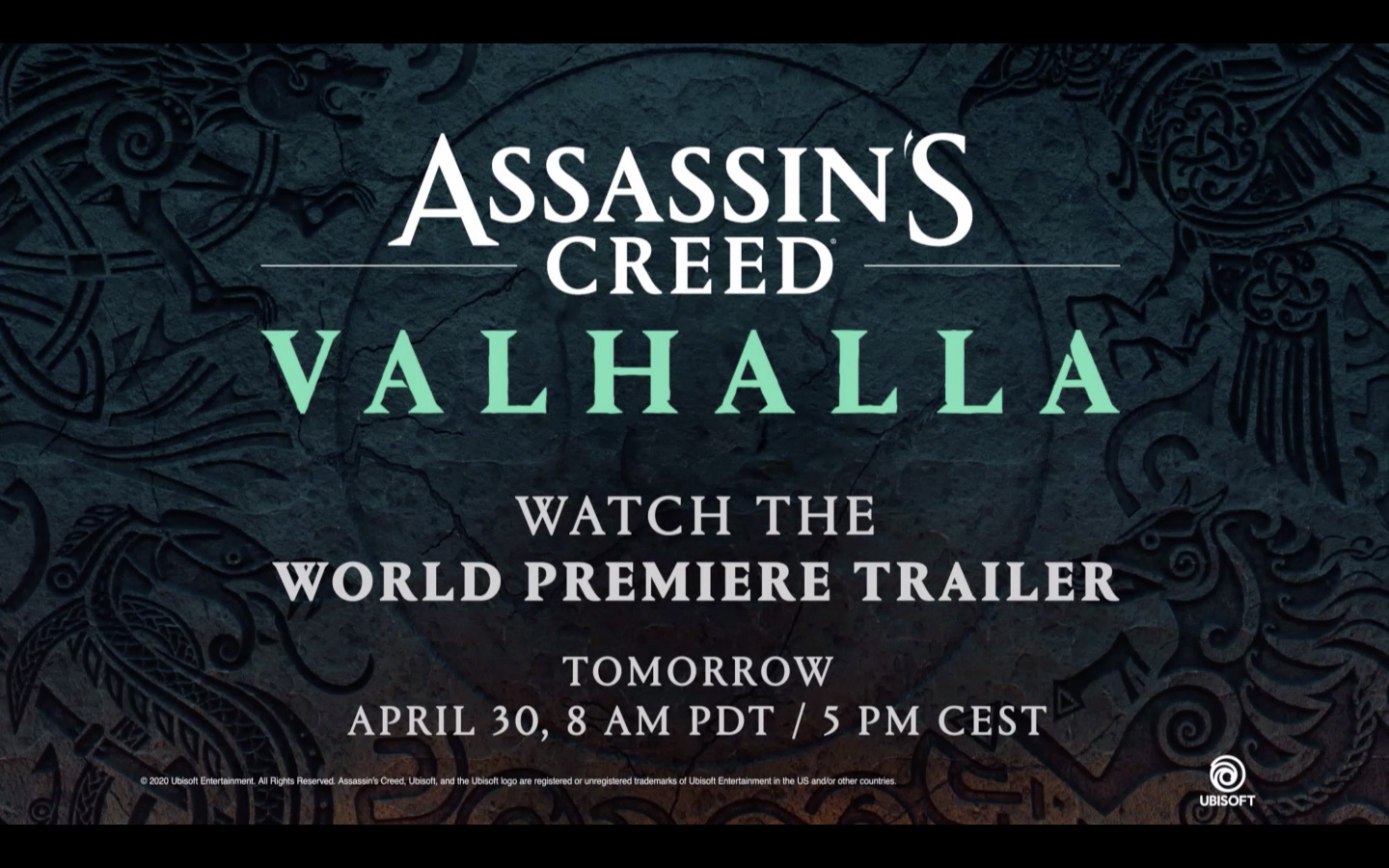 Obviously no gameplay was shown, and the trailer tomorrow seems to be another cinematic trailer rather than an actual gameplay one, but considering that Ubisoft has been planning a digital conference in wake of E3 2020's cancellation, we're probably not far off from seeing some form of gameplay soon.

BossLogic is a popular contemporary digital artist online and has apparently been working with Ubisoft for quite some time now, probably helping out with various concept art for the game considering the kind of work he was doing on the livestream.

"Super excited to reveal what I have been working on for the past few months with
@Ubisoft! Make sure to tune into @assassinscreed for a very first look and catch the entire process live at (https://twitch.tv/assassinscreed)" 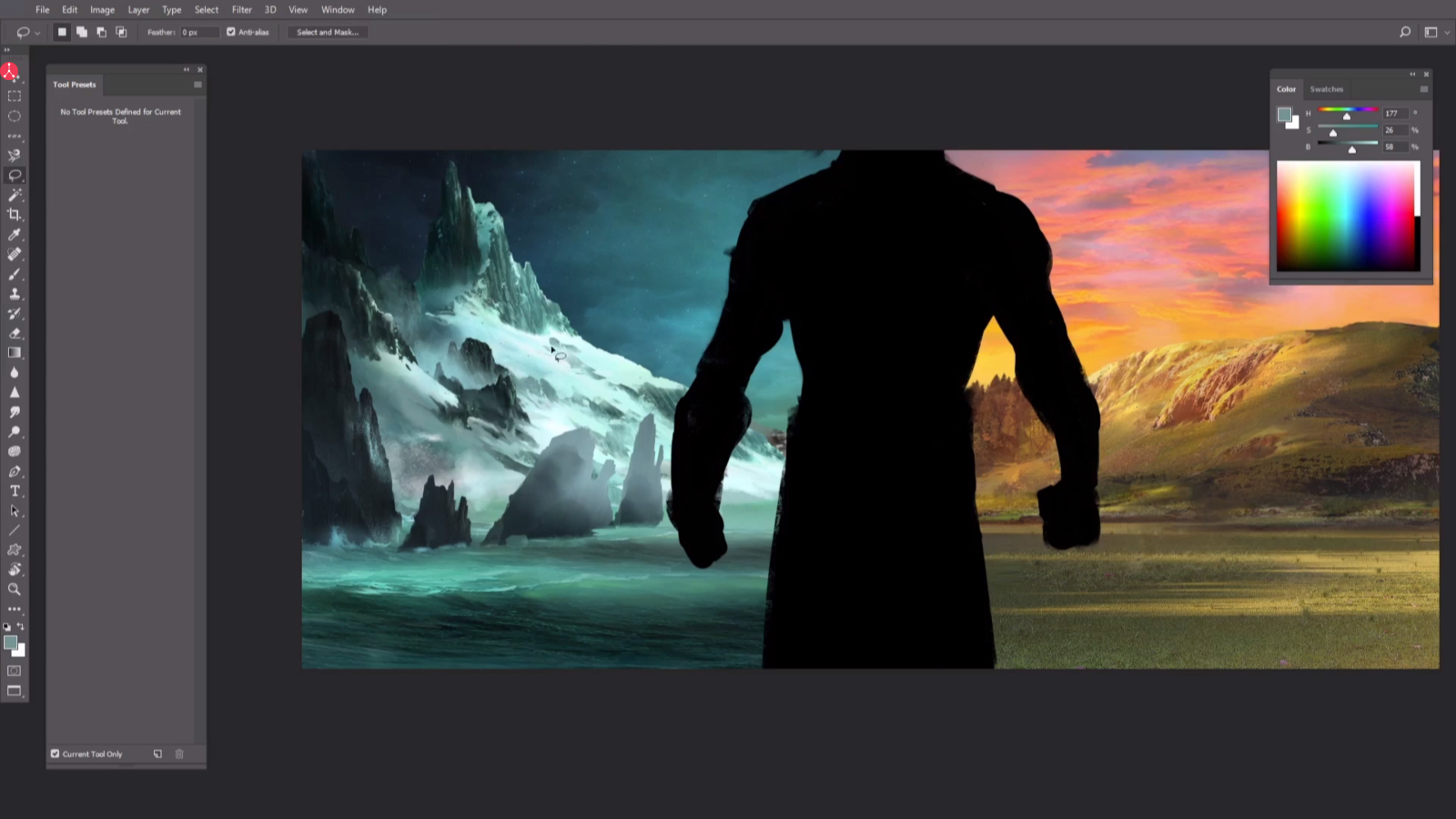 It all started off with a silhouetted figure as the artist continued to manipulate and draw the landscape around him, frequently bringing up multiple assets for references that sent the live chat wild with speculations, until eventually settling on the final reveal of the iconic Viking landscape (which we all saw coming miles away) and the destruction of a possibly English castle. The green hills of England and the icy tundras of the Nordic landscapes were shown off either side of the figure, until eventually the character itself was finally revealed...

It was only inevitable that a new Assassin’s Creed was to be announced, and what better time than when everyone is stuck at home twiddling their thumbs for the next big gaming news announcement, especially when everyone is eager to hear something about the next-gen consoles that are soon to be properly revealed.

Yay another ****ty, unoptimized, Ubisoft engine build on the horizon..

Who cares about optimization as long as the game runs ok?

That comment exactly contradicts what i just wrote.. Bad optimization means it does not run ok even with good rigs.

true, but it will run good enough for sure. Keep in mind that AC games are very demanding on their own, regardless of the optimization. So even if it had perfect optimization, it wouldn't run on weak PCs anyway. On the other hand if it runs at 30fps or 120fps on a ryzen 3, Ryzen 5, Ryzen 7, i3, i5, i7 it doesn't really matter. People focus way too much on FPS.

It's sad that the moment a game has poor optimization, people just dismiss how demanding it is or would be with perfect optimization. That said, if we had 2004-2008 visuals(3d models, textures, lighting, particles, etc, etc), it'd run great. So yeah blame graphics for that.

And Ubisoft does need to write a new better made engine for sure, but even with this one, games still run fine on modern PCs.

I really liked Odyssey but it was too big for its own good. If Valhalla is even bigger, I think it's going to discourage me. I prefer something smaller but better told and less repetitive.

I don't speak Africa, sorry. English where I'm at. XD

With the tales of Ragnar Lothbrok and his family's stories about to end on the Vikings TV show this should help fill the void nicely.

AC always gets me. Though I was burned quite hard by Odyssey I have always enjoyed AC Games. The world and lore Ubisoft built are amazing. And I am going to get this one as I have already played every entry into the franchise. And Vikings baby!

I really hope we don't get another "AsSaSiN's CrEeD" Odyssey which has nothing to do whatsoever with assassins or templars. Seeing as this game has the lead writer from Black Flag and Ashraf Ismail as the Director it may turn out to be great. plus it's set after Origins so the brotherhood was a;ready created.

We'll only be 'Assassins' near the end of the game!
Black Flag was amazing tho!

I'm really looking forward to it, I really enjoyed Origins and Odyssey

I personally hated origins and oddysey, but it has a lot to do with me not liking the setting, I love vikings so I am looking forward to it

I'm excited. I'm in a minority it seems when it comes to the vocal fans but without question it will be succesful. I reckon maybe more so than Odyssey but time will tell.

They have nice ideas but the execution is horrible. Give this game to Rockstar and it would be a masterpiece but since we are talking about Ubisoft...

they will probably ruin it with super grindy system, zero story and microtransactions and yeah horrible optimization while looking like a previous gen game

Agreed on all but bad story. No, not every character could be like Ezio or Edward Kenway, but they were all very interesting and fun to experience in their own right. Not to mention the amazing scenery wherever you went.

No question they will make a better game but at twice or thrice the amount of time Ubisoft took..

Don't forget making us wait 1 year or more for the PC release only to release the worst optimized port ever .

I'm eager for a change in the series, maybe something more akin to the older games (or something new), but since this grindy semi RPG style works so well for them (and at some point somebody mentioned it's supposed to be a "triology"), I won't get my hopes up. I'll probably buy it, since I... tolerated Origins and really liked Odyssey, but definitely not day one.

I knew it. :D
They are going through the mythologies. Next it will be in about Budhism and Hindu and maybe after that they'd do some Pagan mythology, maybe Japanese? It's long overdue for Assassin's Creed to go to Japan. Ninjas, just give me Ninjas. XD

I knew they were doing Vikings the moment I started Odyssey and thought "where else could they have this kind of island hopping and verticality to re-implement the gameplay in the future". It was either this or (less likey Japan) but if someone was to ask me about percentages before, I was 90% in the favor of Vikings.

Vikings as the next game was pretty obvious, there has been rumours going out about it since Black Flag I think. As much as I remember , they won't make game that is set in Japan. But that might be and old information.

Recently played through Warrior's Creed:Origins...If this is just another painfully mediocre RPG then nope, a hard pass from me.