The Port Royale 4 Beta has set sail, and docked in our gorgeous shores. What's included in the Beta? And what graphics settings are currently available? We take a quick dive into the game and what's on offer in the Beta. Since this is just the Beta there are some features still missing, but it has a current release date of 25th September scheduled (assuming development can continue to push forward during the current lockdown) so there is still a good amount of time for tidying. Today we will explore a few of the settings available in the current beta build of Port Royale 4 as well.

How do you get access to Port Royale 4 Beta?

Thee Port Royale 4 Beta is available to play to all those that pre-ordered the game.

A brief setting overview? Sure...

"Set sail and join the colonial powers of Spain, England, France and the Netherlands in their fight for supremacy of the Caribbean in the 17 the century. In ‘Port Royale 4’ you will take control of a colony as a young and ambitious governor, eager to learn what it takes to manage and grow their small settlement into a bustling trader city."

Port Royale 4 is the latest installment in the economic strategy sim that sees players controlling the bustling trade of the pirate era by Gaming Minds Studios, who are previously known for Railway Empire, Patrician 4, and the entire Port Royale series. When you first start the game it defaults to the Spanish nation, but there's also England and The Netherlands available to play as (but you need to complete Spain's campaign first) with the nation of France planned for the full release. 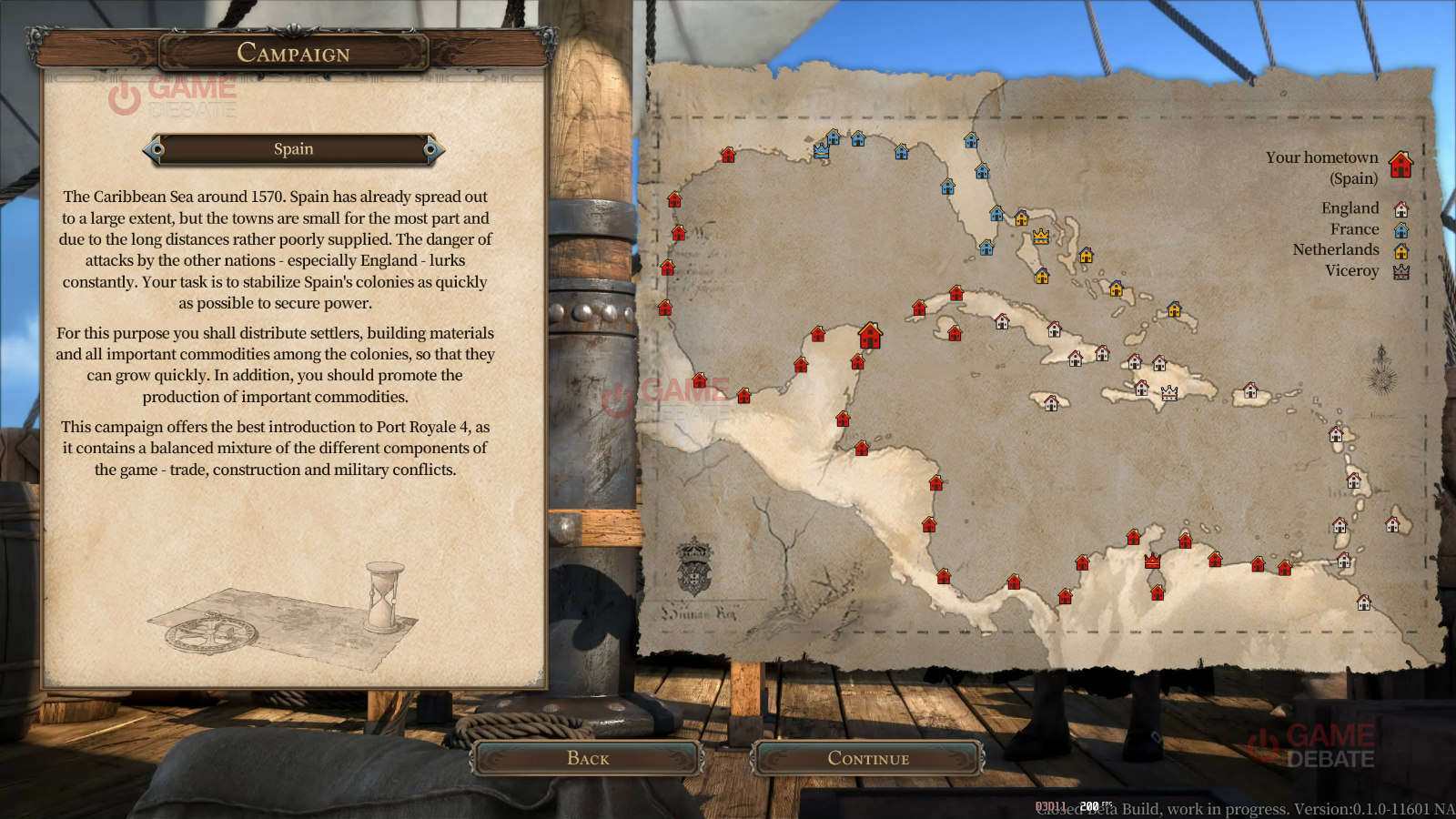 Each nation has their own unique gameplay style and benefits, along with their own extensive single player campaign. Players can appoint a leader for each nation based on four different character classes including the Explorer, the Merchant, the Buccaneer, and the Pirate, again each with their own advantages and disadvantages.

Players must establish and manage trading routes with 60 Caribbean cities in a large 3D game world, whilst navigating around sheer cliffs, shallow waters and stormy weather in order to optimize your trade routes. You can also customize towns by building from a selection of 50 buildings which include 25 different production sites which can produce commodities such as Rum or other luxuries. Construct town buildings that offer neighborhood effects to optimize productivity whilst also managing the happiness of your citizens. Various licenses, building permits, new buildings, and ships can be unlocked through your reputation as it grows within your nation.

There are also 18 historically accurate ship types to choose from the late 16th and 17th centuries. Engage in tactical naval battles with powerful captains and, for the first time in the Port Royale series, combat has gone turn-based.

But before you jump into the campaign, there's quite a few tutorials to get you first acquainted with the game's features, mechanics and controls. What's handy here is that Port Royale 4 will actually tell you roughly how long each tutorial will take, they're mostly 5 minutes long with a couple that take longer, bringing the entire tutorial section to a total of 56 minutes to complete.

These tutorials include the Control Basics, Basics for the Trade of Commodities, Convoy Management, Setting up Trade Routes, Basics of Production, Advanced Town Development, The Viceroy, Naval Battles, Tasks and Treasure Maps, and finally Naval Battle Training. Completing each tutorial will net you a reward of the Queen Anne bonus ship that can be ordered from your nation's shipyard. 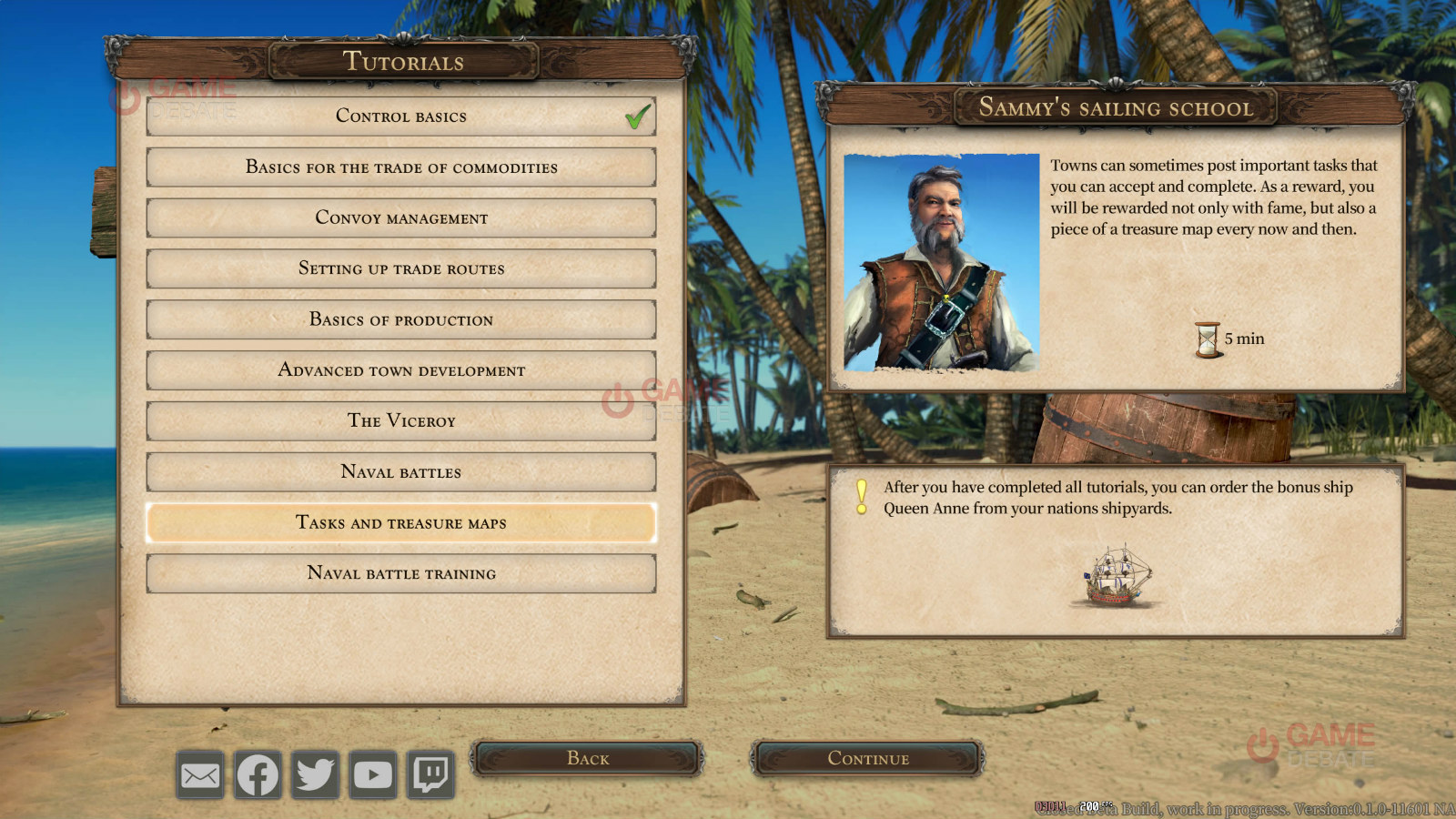 What graphics settings are available in Port Royale 4?

Now the graphics settings currently available in Port Royale 4 Beta are... well its pretty sparse at the moment. Currently under the "Graphics Details" tab in the games menu system there are only 2 options; Reflections and then the second graphics option listed is Vegetation.

Reflections graphics settings can be turned from Low to Normal

Vegetation can be set to Low, Normal, and High.

As we keep saying, this is just the PR4 Beta and there will most likely be more settings to choose from when the game finally releases later this year.

What game engine is being used in Port Royale 4?

The graphics engine used in Port Royale 4 is Gaming Minds Studios' very own in-house engine that was already used in Railway Empire, so expect to see similar performance/system specs. However we are told that this version has received several new improvements for the Beta and so we expect to see some better optimization. 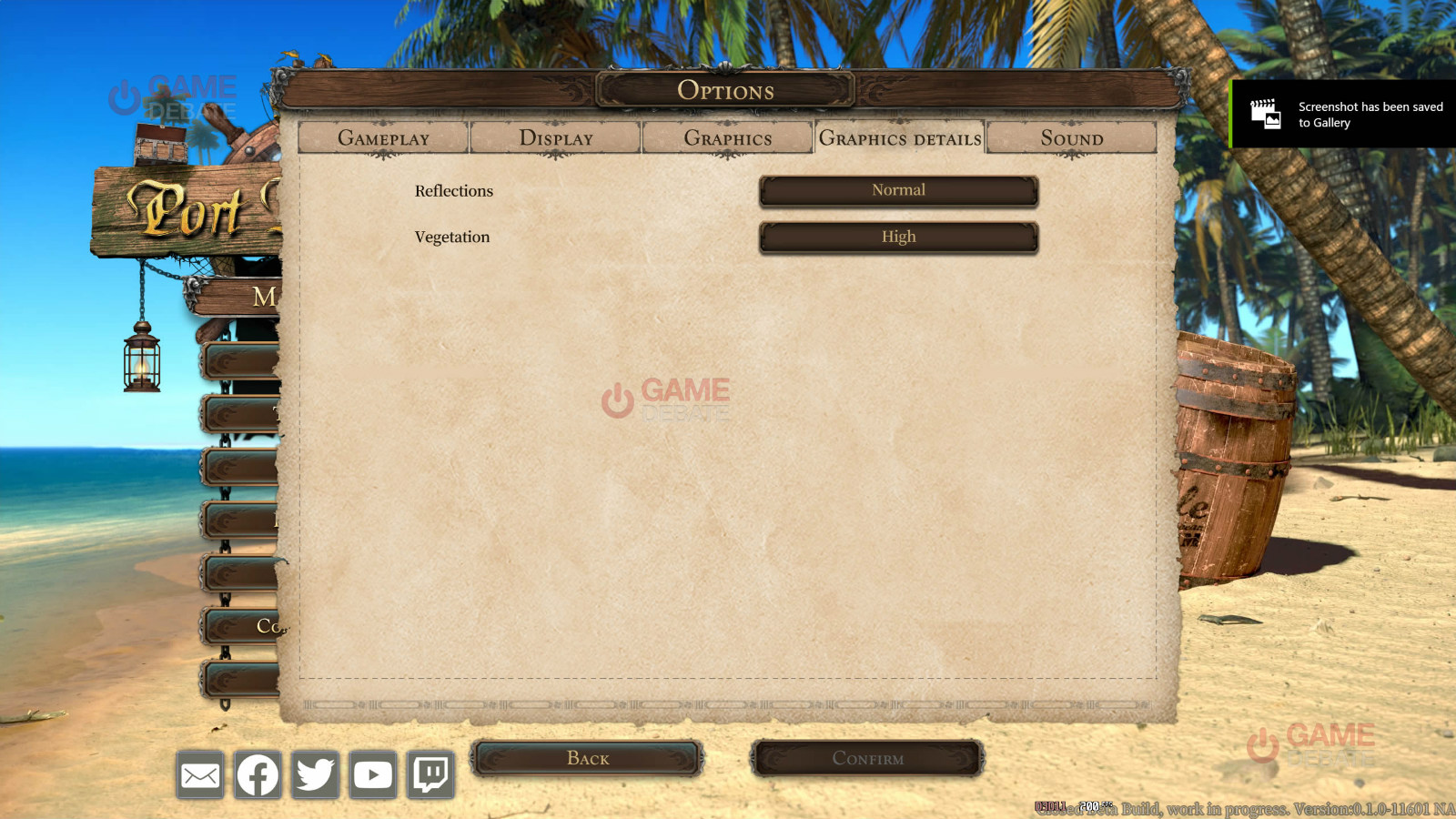 Under the other games menu named "Graphics" in Port Royale 4, there are a few more options that affect the graphics settings. From here you can change the usual settings like your Display setting (Windowed, Windowed Fullscreen, and Fullscreen), which Graphics card to use, Resolution, which Monitor to use as the display, V-Sync, an FPS Limiter, and Gamma settings.

Joining the graphics settings in this tab are 3D Resolution which can be changed between Low, Medium, and High, Texture Details between Low and Normal, and even an option to change the Color Dynamics. 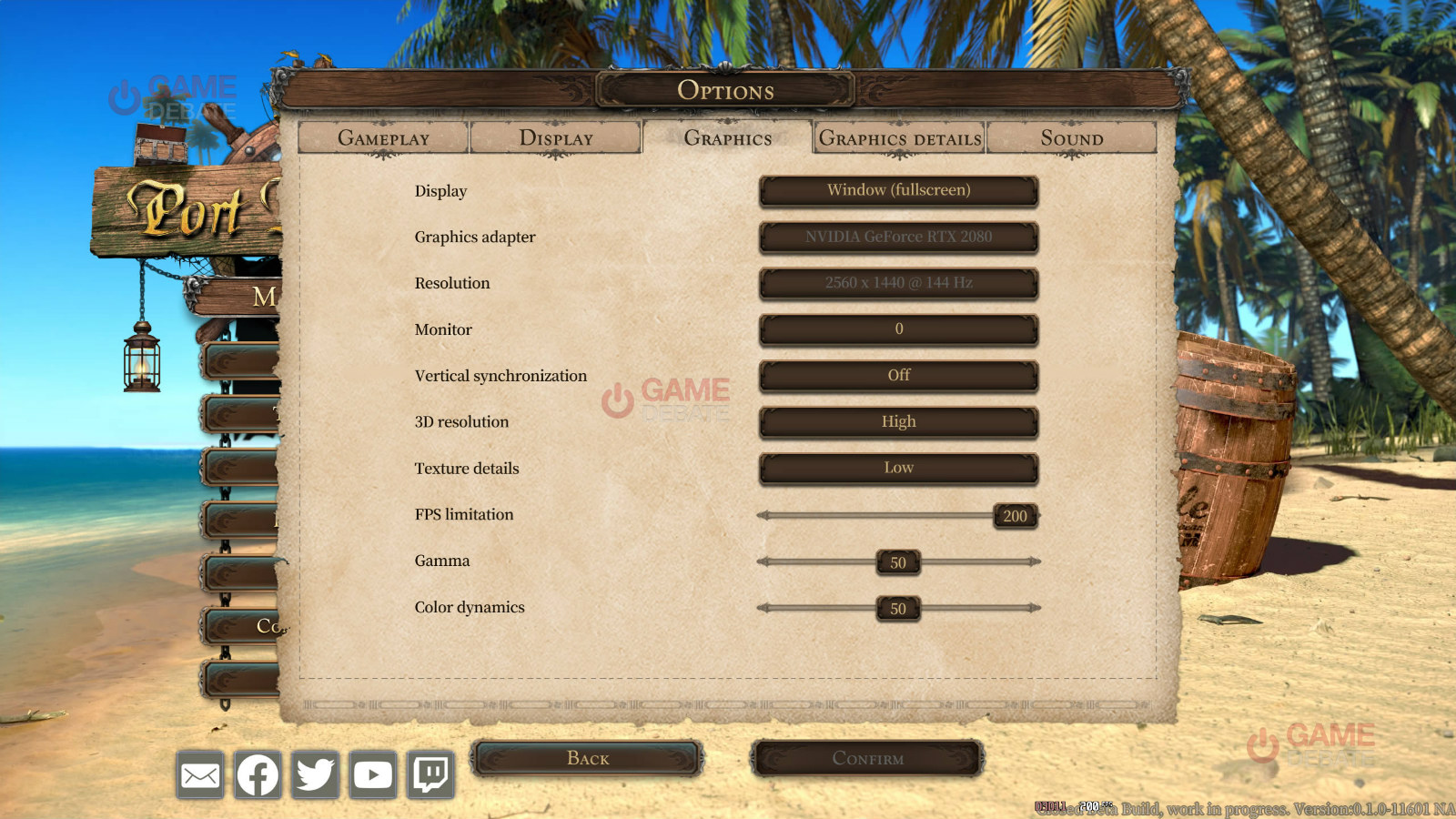 Unfortunately no multiplayer is planned for the full release at the moment, same as renaming cities, customizing ships, and modding support. Though each of those features are simply listed as "not currently planned" so it is possible those features will be included in the future after the full game's release.

Overall, the Port Royale 4 Beta includes a lot of juicy gameplay to get going with the 3 playable nations, lots of extensive tutorials, and the various single player campaigns for each nation. There's certainly plenty of content to keep you busy here as they continue to shape the final game up for release. Though the lack of graphics settings available are a bit disappointing, we totally understand that for a Beta like this they want to get the core gameplay finished off before they start developing in the various graphics settings for us to play with. We expect more to be available for customization when the full game releases along with more content, but considering the way the game performed for us in our tests, this won't be a problem for long.

Port Royale 4 is planned to release September 25th on PC, PlayStation 4, Xbox One, and Nintendo Switch.

What do you think of Port Royale 4? Are you excited for the full release? What features are you looking forward to? Let us know!