SnowRunner, is a popular driving sim, that lets the player drive massive trucks into and through mud and snow, and its out now for PC. Like lots of other similar simulator titles this game needs to look good, to deliver the right levels of immersion while driving. And to do this right, a game like SnowRunner comes with a hefty PC hardware performance cost. Whilst we've been having a lot of fun exploring the great open areas in SnowRunner, we wanted to see how well the game performs on a selection of graphics cards, especially considering how physics simulation-heavy it is. So does it perform about as well as a wet piece of cardboard? Or does it blitz through like a truck through paper? Let's find out...

Secondly, if you haven't read our SnowRunner PC Graphics Settings article (link below), then we have a couple interesting points to look at before we dive in. When adjusting the graphics quality preset, the Simulation Quality setting never drops below the High setting even when the preset is set to Low settings. This is because SnowRunner is a heavily physics-based game and the developers want you to have the true intended experience. You can manually drop this setting to a lower quality, however if you want to see the performance difference between each setting exactly, we'll have a more specific analysis for SnowRunner's simulation quality setting on the way. Similarly, Ambient Occlusion never gets turned off even when dropping the quality preset to Low settings.

And one last thing, since some of the general video settings are not affected by SnowRunner's graphics quality presets (such as antialiasing or film grain), we decided to turn all these off for the Low settings preset, then turn them all on for any preset higher than Low. In the case of antialiasing however, we went with Off for Low preset, TAA for Medium preset, MSAA x2 for High preset, and MSAA x8 for Ultra preset. And we ran the benchmark in the same opening area after starting a new game, driving through some physics-based mud and dirt for a bit. 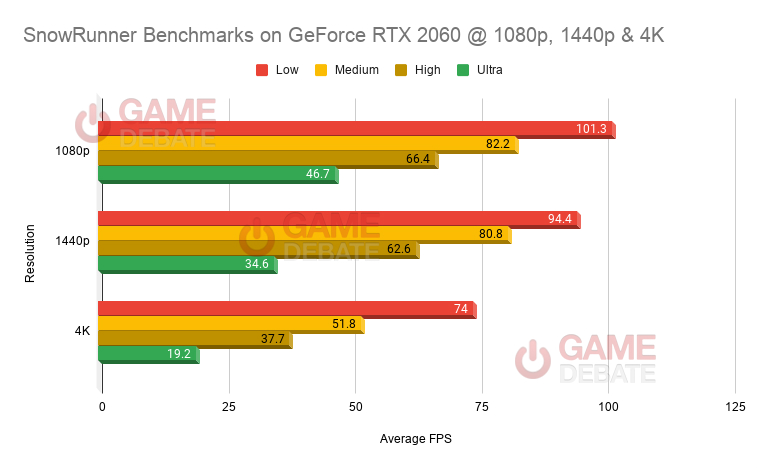 The FPS performance for the RTX 2060 in SnowRunner is surprisingly not that great. Whilst at lower graphical settings this GPU breezes through with ease, they're not quite as high as we would expect, plus it was unable to reach 60fps at Ultra settings. Despite that, both 1080p and 1440p are perfectly suitable to play at High settings, with Ultra bringing in a lot more performance impact. 4K is also playable but only at Low and Medium settings, at High or above the game's frame rate starts to chug with Ultra being downright unplayable. Overall though, the RTX 2060 is perfect for 1080p and 1440p gaming in SnowRunner at High settings. 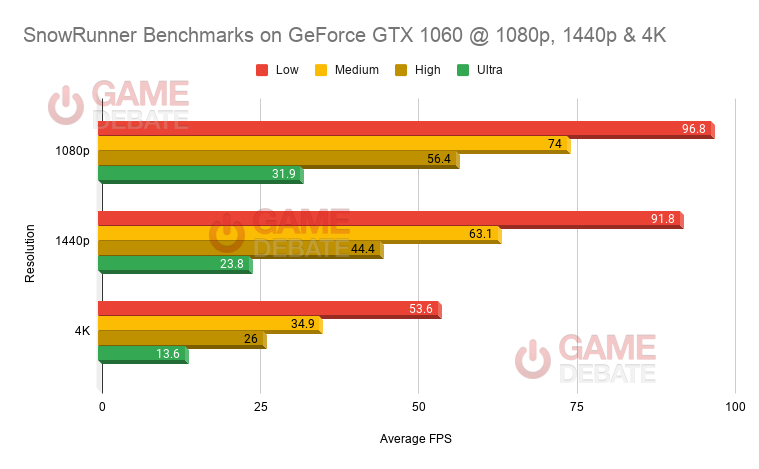 The GTX 1060's FPS performance in SnowRunner is okay. At 1080p settings you're looking at running the game on High settings, whilst 1440p is best played at Medium settings or High if you don't mind the frame drops. 4K resolution is perfectly fine on Low settings or even Medium, but above that the game starts to really lag and you'll see some major performance hits. In the end though, the GTX 1060 is perfectly suitable for playing SnowRunner on High settings at 1080p or Medium/High at 1440p. 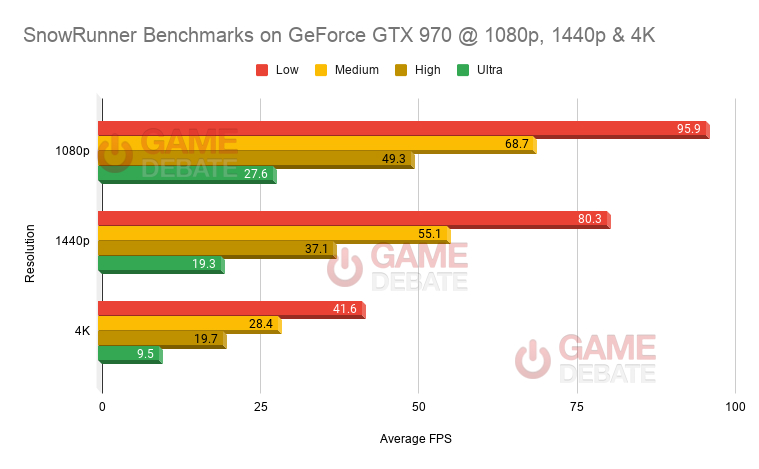 The GTX 970 is the recommended GPU for SnowRunner and the FPS performance is frankly quite poor. Whilst it's perfectly fine to play on High settings at 1080p, 1440p can only reach Medium settings before starting to chug and 4K is unplayable above Low settings. This isn't great results for what is supposedly the recommended GPU. So when playing SnowRunner, the GTX 970 is best suited for 1080p gaming at High settings or 1440p at Medium settings. 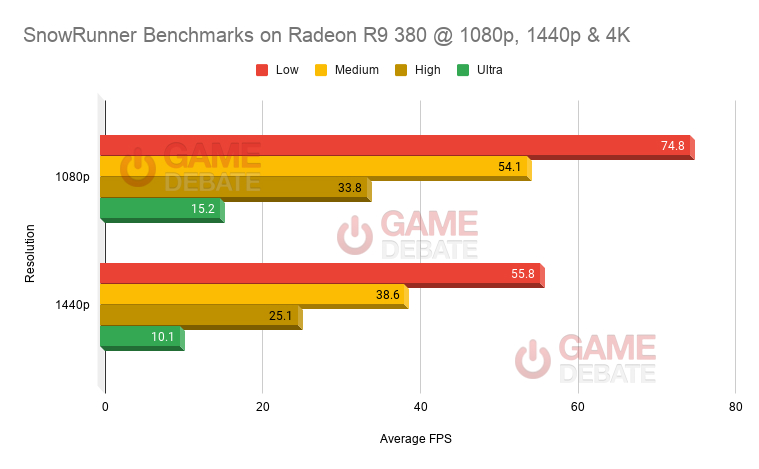 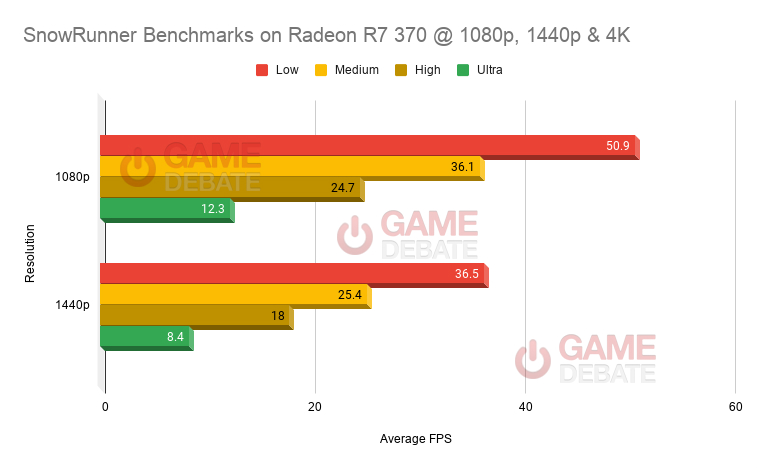 Looking at the results above, we can see that SnowRunner is an incredibly demanding game when pushed to its limits, however it's also really well optimized for lower-end systems. This means that users with low-end hardware are going to be able to play SnowRunner at a comfortable frame rate at least, whilst those who want to see SnowRunner's graphics at its best will need a much higher-end PC.

As for the minimum specs, the same applies here, as the minimum GPU required was a GTX 660 or an R9 270, which our R7 370 comes pretty close to but came just shy of 30fps at High settings as well.

SnowRunner is perfectly playable at 30fps or above by the way, whilst 60fps is ideal the 30 frame rate mark is fine will not ruin your experience. As soon as it drops below 30 though the game becomes completely unplayable as the speed slows down and input lag becomes more significant. Achieving these results in our benchmarks meant that I kept under/oversteering and constantly found myself skidding out of control. And you will find at certain parts of the game the performance will drop a little more as the physics simulation gets more extensive, so as long as you're above 30fps you should be fine to have an enjoyable experience in-game.

For me 70% CPU usage on all cores is max I saw even though CPU is obvious bottleneck. Game just doesn't utilize it well at all. Should have used Vulkan api or just make multi-threading better. Framerate is close to 60, but would have been 60+ if CPU was actually used fully.

it actually can, but you need to reduce msaa to 4x or 2x

For me 70% CPU usage on all cores is max I saw even though CPU is obvious bottleneck. Game just doesn't utilize it well at all. Should have used Vulkan api or just make multi-threading better. Framerate is close to 60, but would have been 60+ if CPU was actually used fully.

SnowRunner is just like World War Z. Its recommended specifications at first glance suggest it's CPU dependent. Turns out it's just another poorly optimized game if the very capable RTX 2060 can't get anything out of it at 4K resolution. Regardless, it's getting decent reviews.

That's bad for a card that was released just a year before.

Or is it that, the game is so very poorly optimized? if it's that, then what the hell Saber Interactive!