And whilst it may be almost identical to the other titles currently out, Halo: Reach and Halo: Combat Evolved Anniversary, you might be wondering how the game performs anyway. And whilst we're all waiting on Halo 3 for PC (because let's face it, that's what we're all excited for), we've compiled a list of results below for our PC performance benchmarks of Halo 2: Anniversary.

Halo 2 Anniversary is part of the Halo Master Chief Collection, and so there haven't been many graphics options added since the collection came out on PC. A unified Medal display setting has been added though, and the framerate limiter has been moved under "Experimental Settings", but other than that, not much else has changed. So currently, the only settings available to change your graphics quality is still the preset option.

And that's it for the graphics settings. Performance lowers the graphics quality to improve performance, while Enhanced increases the visual fidelity at the cost of performance. I'm not sure what "original" means in this context, as the graphics have been overhauled from the original, so if anyone knows exactly what this setting means then please do let us know! For now though, I'm going to regard it as 'standard'.

Luckily, Halo 2 PC is one of the easiest to run major releases we've ever encountered, at least in terms of performance. There are one or two teething problems but just about anyone should be able to run Halo 2 Anniversary in some form at 60 frames per second.

Halo 2 Anniversary might be one of the best running AAA titles on PC, no doubt thanks to the fact that these are relatively older games that have been able to afford the luxury of increased optimization. So we may see some unusual discrepancies when it comes to the FPS results in the high brackets.

We also tested between Performance and Enhanced graphics quality settings in Halo 2 PC to see how much of a difference there really was. Turns out, the results were pretty negligible between the two. So I benchmarked everything at different screen resolutions only on the Enhanced graphics preset. I recorded the results after running around in one of the opening area of the first proper mission, shooting some Covenant Elites and whacking some Grunts. 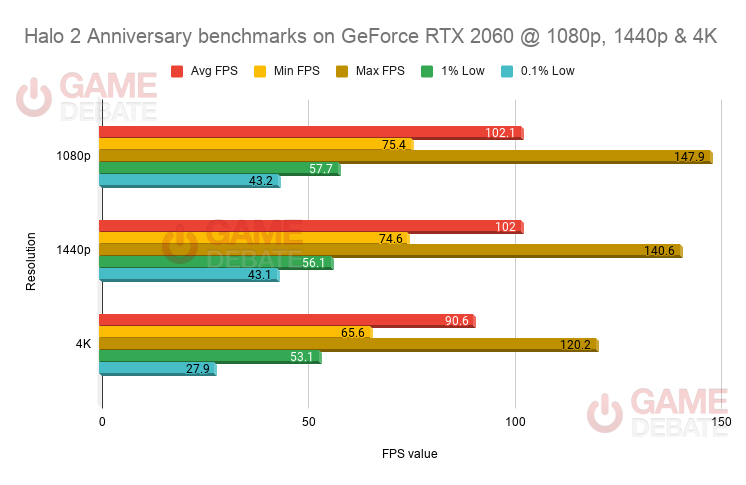 The RTX 2060 absolutely smashed it in terms of FPS performance in Halo 2, breezing through both 1080p and 1440p screen resolutions. And the best part is that if you're rocking an RTX 2060 card or better, you can easily play Halo 2 Anniversary at 4K resolution. 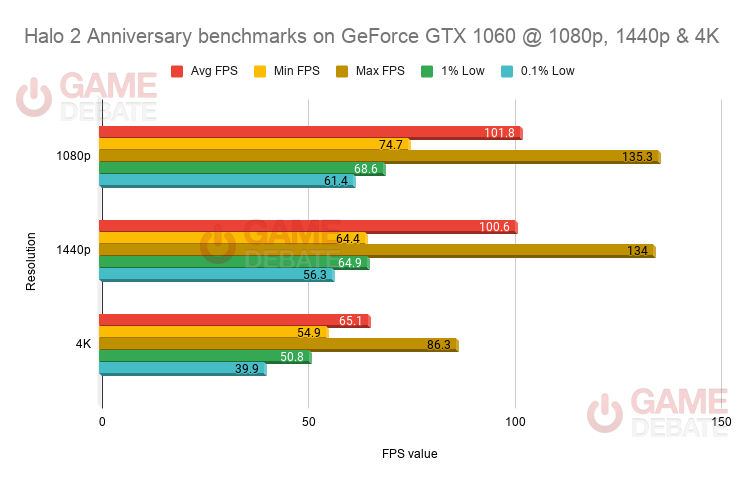 The FPS performance of a GTX 1060 in Halo 2 Anniversary is really good, smashing through 1080p and 1440p resolution settings. 4K is definitely an option here, but for multiplayer you might want to stick to 1440p to keep that competitive advantage. 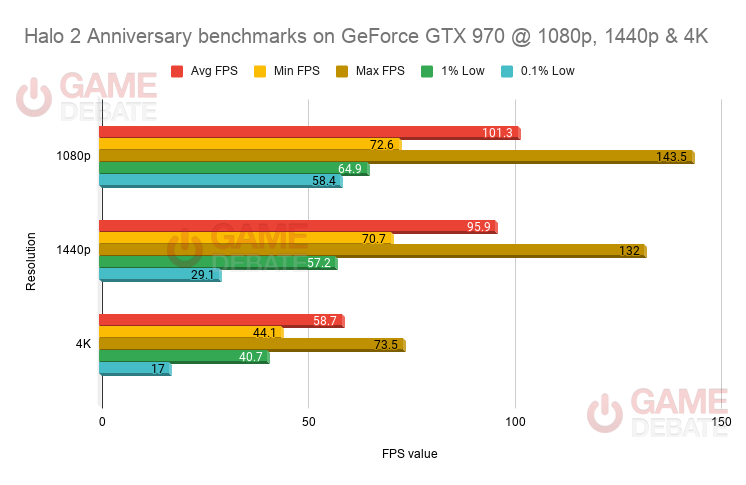 The GTX 970 also does really well in terms of FPS performance in Halo 2. Both 1080p and 1440p are once again viable options, and you can comfortably play at 4K in the campaign. But just like the GTX 1060 above, you might want to stay on 1440p for multiplayer in Halo 2. 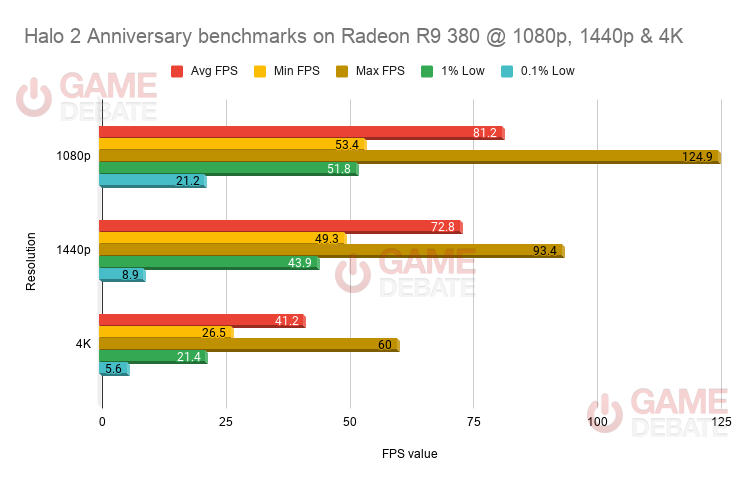 The Radeon R9 380 quite surprisingly does really well for FPS performance even at 1440p screen resolution, whilst breezing through 1080p easily, in Halo 2 Anniversary. Whilst you can play the campaign at 4K resolution, it's definitely not recommended for multiplayer. Overall though, you can comfortably stick to 1440p resolution in Halo 2 for PC with a Radeon R9 380. 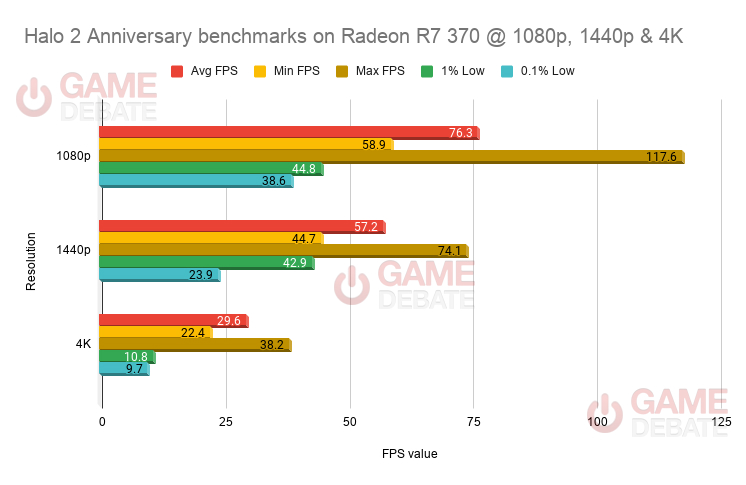 The FPS performance results for a Radeon R7 370 in Halo 2 are actually really good. 4K gaming is not recommended here, but at 1440p you can get a comfortable frame rate during the campaign. But if you want to play multiplayer, 1080p might be the better option just in case. But in the end, the R7 370 surprisingly breezes through both 1080p and 1440p resolutions settings for Halo 2 Anniversary on PC.

So as you can see in the FPS performance results above, Halo 2: Anniversary is wonderfully optimized for PC, allowing even lower-end cards the ability to get solid performance results at 1080p and even 1440p. So it looks like pretty much anyone is going to be able to play Halo 2 PC at 1080p 60fps in some form or another.

For a true 4K experience in Halo 2 Anniversary you could easily scrape by with a GTX 970, but a GTX 1060 will smash through 4K gaming with ease, turning Halo 2 on PC into one of the most easily accessible 4K gaming experiences out there.

Halo 2: Anniversary on PC comes equipped with only a limited amount of graphical settings to choose from. Apart from being able to switch between the Anniversary graphics and original 2004 graphics with the press of a button (which is TAB by the way), you can only change the graphics quality presets.

Under the Graphics Quality option you can select 1 of 3 presets: Performance, Original, and Enhanced. But there isn't a huge difference between all three as of now, so let's take a look at the visual differences between Performance and Enhanced graphics presets in Halo 2 Anniversary PC.

Here's the most notable difference, as you can see Enhanced enables a higher quality Ambient Occlusion/Contact Shadows. Plus, you can see in the shadow of the stairs on the wall, Enhanced increases the overall quality of shadows too making it slightly sharper and less blurry.

Again, you can see the contact shadows at work here. There's not much else to look at except that you can see some of the smaller textures behind the actual guns themselves get a bit sharper and clearer on Enhanced.

This one's interesting, looks like dynamic shadows are disabled for moving objects and characters on Performance quality preset, as you can see the soldiers in the distance lose their shadows. You can also see that the level of detail is decreased over distance compared to Enhanced, this is most notable on the soldier's armor.

Again, more contact shadows at work, plus you can see that some textures on the armor become a bit more clear on Enhanced.

You can see the antialiasing more at work here, the structure on the left appears to have much more jagged lines around the edges when on the Performance quality preset.

You can see here that the fire itself is a higher quality on Enhanced, with a sharper and more detailed texture. Whereas on Performance it looks a bit blurry.

You can see here that textures aren't that much affected up close, but when viewing them from further away or at an oblique angle you can see the quality drops when on Performance, with certain details getting more blurry and jagged.

Finally, an overall shot of how much better Enhanced is than Performance, as the antaliasing and contact shadows are much more prominent here. On Performance we see that the shadows disappear and everything appears to have more jagged lines around the edges.

Still though, seeing not much difference between Performance and Enhanced means that you'll have just as good an experience on either quality presets if you want to save a few extra frames.

Overall, Halo 2: Anniversary is a fantastic port for PC players that sees even those with lower-end hardware able to steadily run the game at 1440p and blow past the 60fps mark with ease at 1080p. Interestingly, there doesn't seem to be a massive difference between the 1080p and 1440p screen resolution settings for Halo 2 Anniversary, especially on higher end cards, so you can safely stay at 1440p without worry of any performance issues. Plus, Halo 2 on PC may be one of the most easily accessible 4K gaming experiences out there in terms of recent AAA titles.

We also saw very little difference in Performance vs Enhanced graphics presets, so if you're hitting just under the 60fps bar then maybe turn that graphics quality setting down once or twice. Luckily, there's not a hugely noticeable differences in terms of graphical quality, so you could easily turn those settings down and not miss them at all.

Halo 2 PC runs fantastically on modern PC systems, it's available now on Steam or the Xbox Game Pass either as a standalone or as part of the Halo Master Chief Collection. Let us know if you discover anything worth mentioning that we may have missed!

Verandah Builders Bendigo also wants to have this kind of feature where readers can express their thoughts. Hence, this is the reason I will visit you again because I just love your articles.

Makes $340 to $380 per day online work and i received $16894 in one month online acting from home. I am a daily student work simply one to a pair of hours in my spare time. Everybody will do that job and online makes exand tra cash by simply open this web....... ____ http://www.EarnCash7.com

I am making a good salary from home $1200-$2500/week , which is amazing, under a year back I was jobless in a horrible economy. I thank God every day I was blessed with these instructions and now it’s my duty to pay it forward and share it with Everyone, Here For MORE INFO …............. http://www.EarnCash7.com

I have personally played the game, and although it plays smoothly at 1440p 144Hz on my PC, there are sporadic slowdowns. Fewer than necessary to keep playing, but sufficient to note. From I've been playing it since the second day of release, perhaps a subsequent patch can eliminate these lags. word wipe

I have personally played the game, and although it plays smoothly at 1440p 144Hz on my PC, there are sporadic slowdowns. Fewer than necessary to keep playing, but sufficient to note. From I've been playing it since the second day of release, perhaps a subsequent patch can eliminate these lags. word wipe

I am making a good salary from home $1300-$2600/week , which is amazing, under a year back I was jobless in a horrible economy. I thank God every day I was blessed with these instructions and ADq now it’s my duty to pay it forward and share it with Everyone,

The content of your article seems to attract the attention of many readers, and I have to say that I am quite impressed with your article. I am looking forward to reading more articles about your excellent basketball stars

Anyone else have freezing happening upon first loadup of either a level on singleplayer or multiplayer? I can deal with it on singleplayer by just waiting it out until it stops, but in multiplayer...well you kinda gotta get a move on.

hold on isnt i3 3550 faster then i7 870, as it is in all older games but i guess here is the exception if game uses multi cores

Wow the 1060 and 970 have better/smoother performance at 1080p - shown by the better/higher minimum fps. Very interesting

I've played the game myself and while my system easily runs the game at 1440p 144Hz, there are the occasional slowdowns. Few enough to continue playing, but enough to mention it. I've played it on day 2 since it came out, so maybe a later patch will smooth out these slowdowns.