Good evening, adventurers. What's that? You want to battle hordes of mobs and venture into the deep crypts to thwart the plans of the illagers in a fight for our blocky survival? Well hop on in! It's time to see how well Minecraft Dungeons performs on our PC systems. Is it just like Minecraft? Or is it somehow a bit more demanding? Let's take a look...

First of all, in this PC Performance article for Minecraft Dungeons, we benchmark the ever popular GeForce GTX 1060 and GeForce GTX 970, and a close match of the minimum system requirement GPU the Radeon R7 370. Then we go through the FPS test results of each graphics card ran at 1080p, 1440p and 4K screen resolutions. From there we can see the performance of the recommended and minimum system requirement graphics cards and consider how well optimized Minecraft Dungeons really is.

For these benchmarks, there unfortunately isn't any in-game benchmarking tool, nor was there an easy section to just replay exactly over and over again due to the procedural nature of the way the maps are built. So there may be a few discrepancies with the results. Nevertheless, I got these results below by jumping into a dungeon and wildly flailing about trying to cause the most amount of mob mayhem and get as many particles on screen as possible, as those moments will be the most intensive. 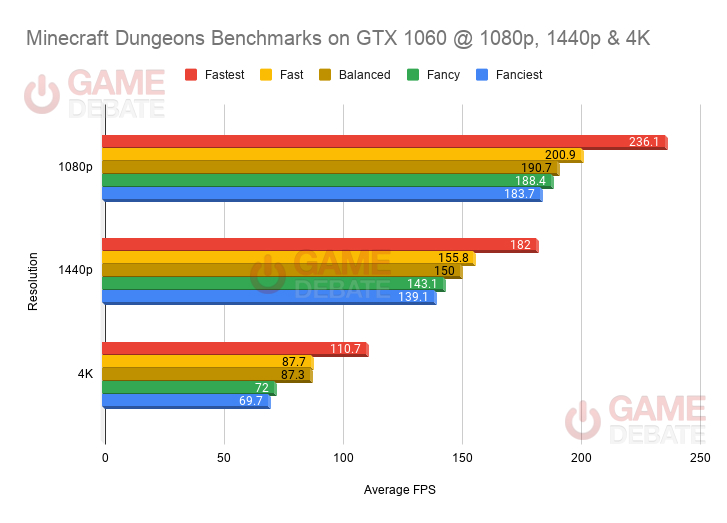 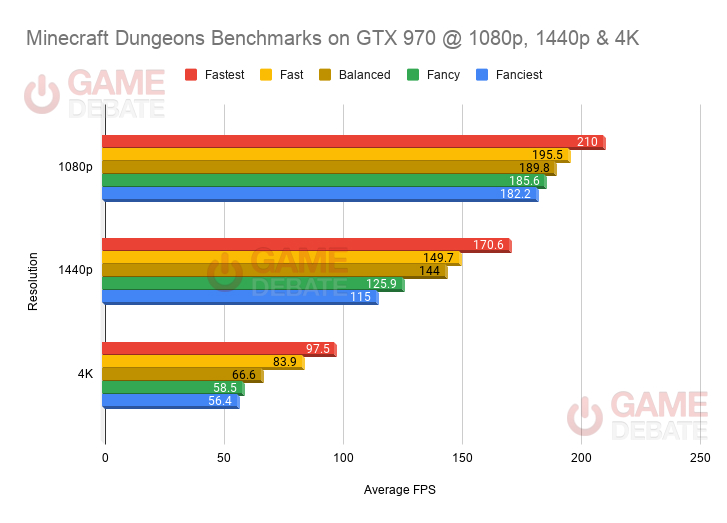 The GTX 970's FPS performance in Minecraft Dungeons is also pretty good, a solid and stable frame rate on 1080p and 1440p screen resolutions, with a comfortable FPS on 4K, though you may want to keep it on 'Balanced' for the optimal frame rate performance when at 4K resolution. Overall, the GTX 970 is perfectly capable of handling 1080p and 1440p at the maximum graphics settings in Minecraft Dungeons. 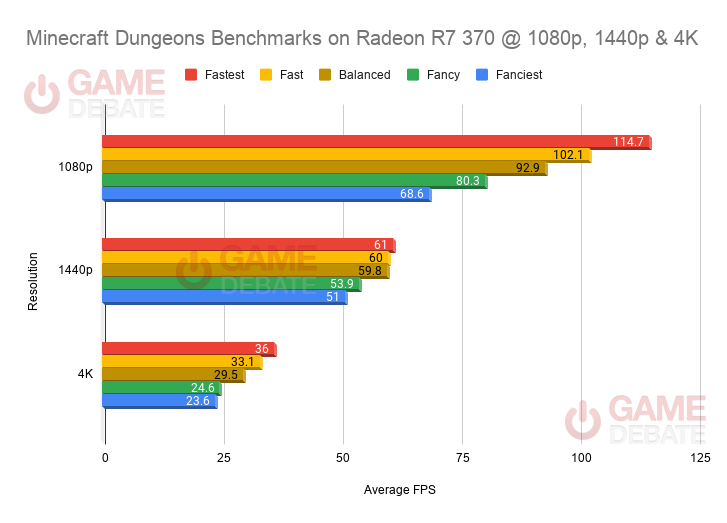 Finally, the FPS performance in Minecraft Dungeons for the Radeon R7 370 is also pretty good, although past 1080p it can get a bit choppy. The R7 370 is a close match for the minimum system requirement GPU, the GTX 660, and it can certainly handle 1080p just fine. However, at 1440p this graphics card handles best on Fast or Balanced graphics settings, whilst 4K is quite frankly unplayable for a fast-paced hack and slash dungeon crawler. So in the end the R7 370 is perfectly suitable as a minimum spec for Minecraft Dungeons and handles 1080p just fine, whilst 1440p will require a bit of tweaking and 4K is unplayable .

So looking at these results we can see that Minecraft Dungeons isn't a demanding game at all... at 1080p. Anything above 1080p screen resolution like 1440p does tank the frame rate quite a bit, but higher-end cards can still handle. Whilst 4K gaming in Minecraft Dungeons appears to be quite demanding even on higher-end cards. Although it does look great at 4K, you won't be missing out on much by playing at 1080p.

So it may require a bit of tweaking in the settings if you wish to play on UHD resolution with a lower-end card, but higher-end cards will be perfectly fine to play at these resolutions.

Summer Game Fest 2022 will include announcements from Capcom, EA, Activision, and more

“This summer fest is going to start soon and this is actually for pro players from capcom. The [assig...” - Andrew81892

“This is a very informative blog, in fact, I will recommend it to my friend to read this blog and I b...” - Gujjerseo

“Vanguard looks amazing[,](https://www.drywallproscleveland.com) but how does it perform? What visual...” - ampva301

Makes $340 to $380 per day online work and i received $16894 in one month online acting from home. I am a daily student work simply one to a pair of hours in my spare time. Everybody will do that job and online makes exand tra cash by simply open this web....... ____ http://www.EarnCash7.com

I am making a good salary from home $1200-$2500/week , which is amazing, under a year back I was jobless in a horrible economy. I thank God every day I was blessed with these instructions and now it’s my duty to pay it forward and share it with Everyone, Here For MORE INFO …............. http://www.EarnCash7.com

I am making a good salary from home $1300-$2600/week , which is amazing, under a year back I was jobless in a horrible economy. I thank God every day I was blessed with these instructions and ADq now it’s my duty to pay it forward and share it with Everyone,

I think kids as young as 8 play poppy playtime. You can judge by their voices. They do get annoying as they sometimes just do whatever they want in game and don't really play competitively. And they get really noisy too! Nonstop talking and yelling. Yes.

Even with high-end graphics cards, playing Minecraft Dungeons at 4K seems to be a challenge fireboy and watergirl

Google pays for every Person every hour online working from home job. I have received $23K in this month easily and I earns every weeks $5K to 8$K on the internet. Every Person join this working easily by just just open this website and follow instructions....>>>>>> http://www.EarnCash7.com

You have given me useful information; playing run 3 provides you a lot of energy and an incredibly immersive 3D experience in which you must run through the levels from simple to challenging.