It's time to start a robot revolution, as the hour of mankind begins to dwindle, it's up to you to stop the evil forces at work. But how will you be able to handle it? Is your PC up to snuff? We take a look at the FPS performance for various graphics cards in the upcoming sci-fi action game Disintegration.

First of all, in this PC Performance benchmark article for Disintegration, we benchmark the recommended system requirement graphics card the GTX 1060, as well as a higher-end card RTX 2060, and lower-end with the Radeon R7 370. Then we go through the FPS test results of each graphics card ran at 1080p, 1440p and 4K screen resolutions. From there we can see the performance of the recommended and minimum system requirement graphics cards and consider how well optimized Disintegration really is.

Once again there aren't any in-game benchmarking tools available, so to get these results I ran through the first area of one of the early missions, shooting some bad guys and blowing up some enemies. I tried to get the most amount of particles and debris on screen as these will be the most demanding moments later in the game.

Now with all that said, let's get on with the PC performance benchmarks for Disintegration... 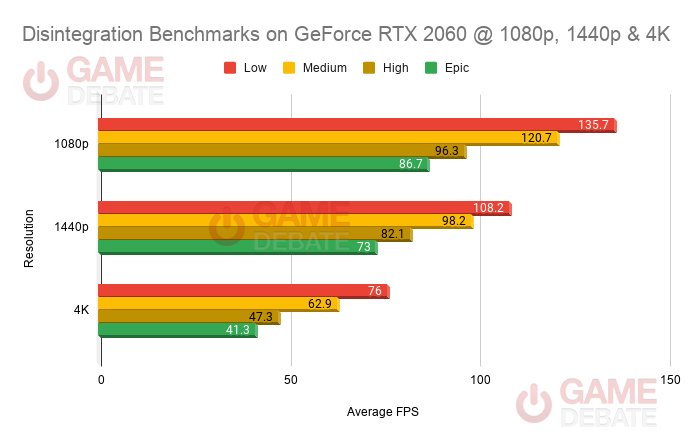 The FPS performance for the RTX 2060 in Disintegration is unsurprisingly very good, not only does it easily breeze through 1080p but you could also play Disintegration at 1440p at Epic settings too. In order to play 4K you might want to stick around the Medium graphics mark for the most comfortable experience, but you could push it to High or Epic if you really wanted to without it becoming unplayable. Overall, the RTX 2060 performs really well in terms of FPS in Disintegration and can easily reach Max settings at 1080p and 1440p screen resolutions. 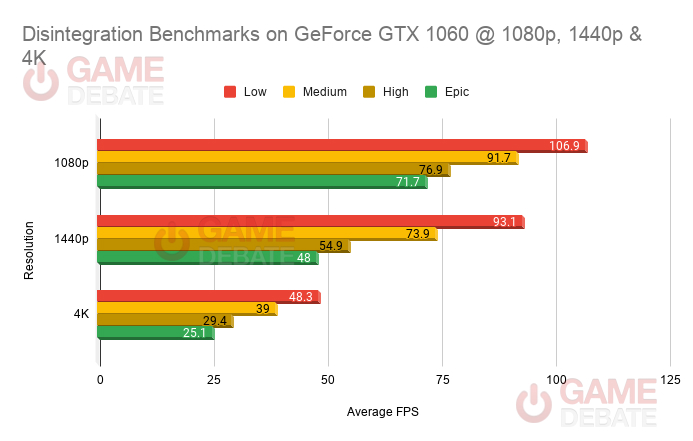 The GTX 1060 performs really well in terms of FPS in Disintegration, besides being the recommend graphics card it breezes by in 1080p even at Max settings. At 1440p you can easily play at Epic settings but you might want to keep it on High instead for more stability and comfort. 4K is definitely playable up to Medium settings, but beyond that and your performance will start to hinder. In the end the FPS performance for the GTX 1060 in Disintegration is great and can easily reach Max settings at 1080p, or Medium/High settings at 1440p. 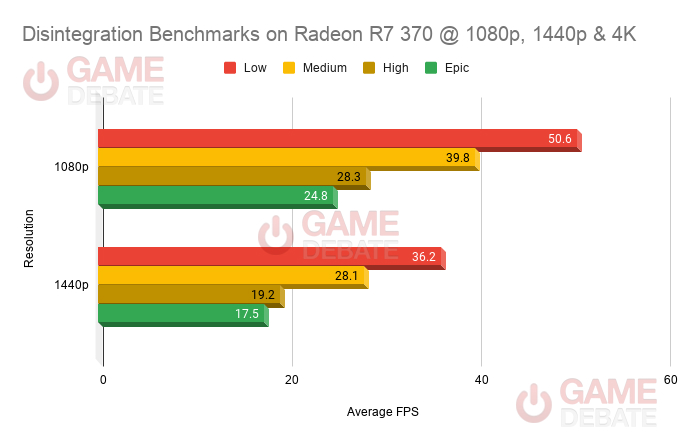 The FPS performance for the Radeon R7 370 is not that great, however it does show that Disintegration can run on really low-end hardware in at least a playable state. At 1080p you can run at Low settings for the most comfortable performance, though you can push to Medium for a little extra graphical fidelity without sacrificing your experience. At 1440p even at Low settings the game runs but not in a comfortable state. Anything above Medium settings at 1080p is unplayable in my opinion and 1440p is pretty much out of the question. But apart from that, the R7 370 is perfectly suitable to run Disintegration in a playable state at 1080p on Low settings.

Looking at these FPS performance results for Disintegration we can see that whilst the game can be demanding at times, overall the experience is very well optimized. The recommended graphics card the GTX 1060 easily outperforms here and the R7 370 was surprisingly able to run in at least a playable state. As usual, higher-end cards like the RTX 2060 absolutely blitz through, even allowing for 4K gaming with a few tweaks to the graphics.

Overall, Disintegration is not that demanding on your PC and is very well optimized for mid-high range GPUs. Lower end cards will still be able to play but at reduced settings.

“Where are you getting your info since going gold doesn't mean that at all.” - mtlvmpr

as someone who has almost the same hardware shown on the benchmarks, i smiled.

Yikes! Those requirements though..... they seem cough "skewed" to anyone else? When are we going to kill the ancient mess which is DX11 and finally enter 2016? Oh you mean it's 2020? Coulda fooled me! lol