Alleged spec sheet for RTX 3080 Ti reveals 21 TFLOPS of performance, according to rumor

There’s been a lot buzzing around for the next generation of graphics cards from Nvidia and AMD, which has caused the internet to scrounge for any little details they can find, but has also made room for some fake leaks coming out. An alleged spec sheet for the RTX 3080 Ti reveals up to 21 TFLOPS of graphics performance, but also presents a few discrepancies in the data.

Twitter user CyberCatPunk posted a photo of what seems to be a legitimate spec sheet at first glance, but there are a couple things that don’t make sense. We’re going to take this as true for now just for the sake of discussion, but keep your salt shakers at the ready, folks. See if you can spot the discrepancies before we reveal them further down, but for now take a look at the reported spec sheet below: 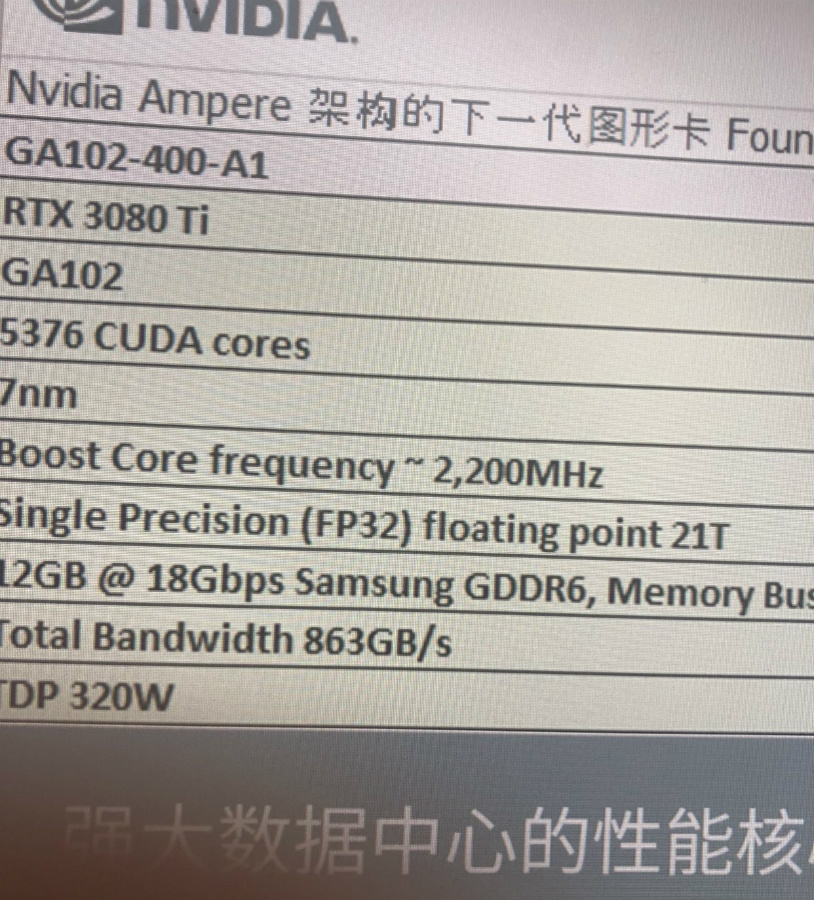 If these specs are true, we’re looking at 21 TFLOPS of raw graphics power from the upcoming GeForce RTX 3080 Ti with 5,376 Cuda Cores, a boost clock speed of 2,200MHz, 12GB of GDDR6 memory and a tremendous 320W TDP despite the 7nm process node.

If we compare these reported specs to the previous RTX 2080 Ti we can see what kind of improvements have been made over the previous generation (if these rumors are true):

So as you can see there isn’t a whole lot of improvement here over the previous generation apart from the Cuda Core count and boost clock speeds. But a few of the discrepancies might point this leak more towards the fake circle.

For instance, at 21 TFLOPS of compute power, the official boost clock would instead be 1,953MHz rather than 2,200MHz. On top of that, this SKU is labelled as the GA102-400-A1 which would mean it’s the flagship GPU in the RTX 30 series, but previous leaks have shown the flagship to be an RTX 3090 instead.

We’ve had some pictures leaked that showed the actual design of the RTX 3080 GPU, as well as a separate picture of the entire cooler block itself. Though these have been confirmed by Nvidia due to their seeking for legal action.

So it’s a bit all over the place really, this alleged leak goes against most other alleged leaks, and so it’s getting hard as to what to believe now. Personally I feel like the aboved spec sheet is a fake considering the credibility behind previous leaks, and the few discrepancies that don’t make a whole lot of sense.

But what do you guys think? Could this be legitimate? Did you notice any other discrepancies in the data? Which recent leak has seemed the most legitimate to you? Let us know!

Pretty sure its fake.. The leaker is known for sharing fake information.
Still 21 Tflops is the least I would expect if XSX is 12+ TFlops. Probably 24 or something..

I hope this is true. It remains to be. My hopes are not all that high yet.

Facepalm top tier gpu - 12gb of vram, 320W TDP, inefficient and with planned obsolescence... The more i see these leaks the more im looking forward for big navi details, dont get me wrong, 21 tflops is amazing but everything else aside ray tracing capabilities looks awful

Decent guess, but too many "if's" i got burnt by buying gpu with not enough vram in the past so i will try to avoid as best as i can. I understand that 12gb on 3080ti at this moment of time is enough for ultra settings 4k but imo for 3080ti performance level it should be around 16gb or more... Besides 320W TDP doesnt look nice either

7nm at this point is cheaper than it used to be and 7nm in general was much higher volume than 12/16/20nm to begin with.
For 7nm TSMC got Apple, AMD, IBM, Qualcom and many others, for 12/16/20nm it had primarily Nvidia. So yeah. 7nm's additional costs are dispersed by selling a boat load more wafers(higher volume).

All I care about is what kind of performance can they offer at the prior 1080ti price point of $699. If they can double it I am definitely in. 50% boost I'll think about it. Anything less I am sticking with my 1080ti.

Well unless their new architecture has a big IPC improvement, chances are that the RTX 3000 seires GPU with a die size similar to the gtx 1080Ti +10-20% for Tensor cores and RT cores will be more like in the middle of 50-100% improvement. But we need further details.

IF we are to believe this rumor... Damn 7nm is really inefficient it seems, at least at really high clock speeds, which this is sure to have. Also explans why Navi isn't very efficient.
7nm+/7nm EUV is the way to go.