Death Stranding on PC can reach 4K 60fps with DLSS 2.0 on all RTX cards, says Nvidia

Kojima’s controversial yet undeniably stunning literal-walking simulator Death Stranding is finally gracing our PC systems in a couple weeks' time after being a PlayStation 4 exclusive for just over half a year. But according to an Nvidia press release, Death Stranding on PC will include their standout AI tech DLSS 2.0, and the performance benefits currently seem pretty incredible.

CTO of Kojima Productions, Akio Sakamoto, said: “DEATH STRANDING already has the reputation of being a visual stunner, but NVIDIA DLSS 2.0 helps make the PC debut something special. The extra performance NVIDIA DLSS 2.0 delivers in DEATH STRANDING allows gamers to unlock the vast graphical potential of the PC platform by increasing the graphics settings and resolution, delivering on the vision we have for the game.”

So for those of you rocking an RTX card, whatever version it may be, you’ll be able to comfortably play Death Stranding at 4K resolution and at least 60fps. The screenshot below shows just the kind of image quality you can get with Death Stranding on PC with DLSS 2.0 enabled: 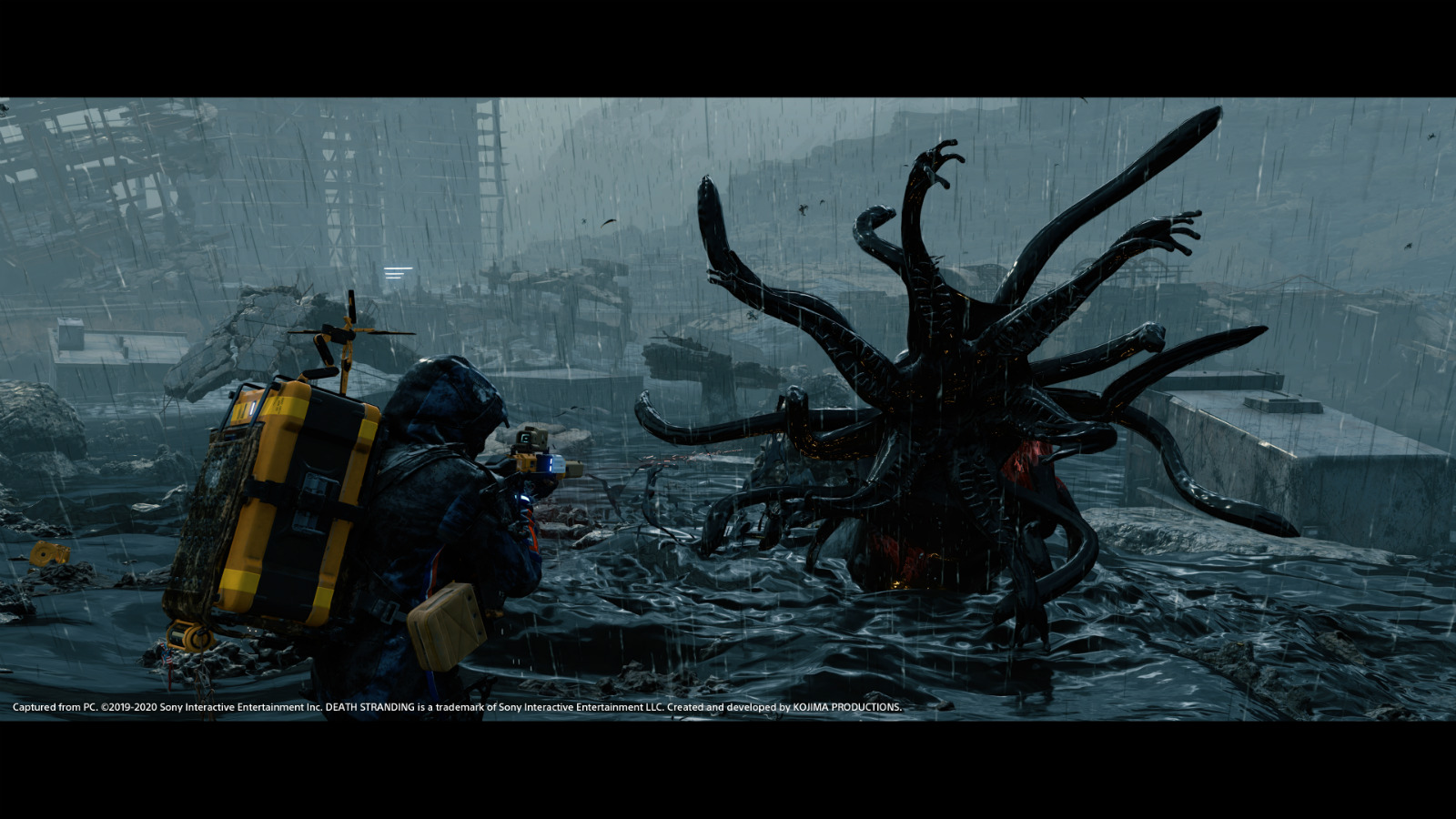 DLSS 2.0, for those who don’t know, is a deep learning neural network (DLSS stands for Deep Learning Super Sampling) and essentially increases performance without sacrificing image quality. It basically offers native resolution whilst only using half of the pixels, upscaling a lower resolution image using cutting edge AI technology, which as you can imagine, increases performance by a great deal.

DLSS is shaping up to be some pretty nifty technology. Where once before 4K rendering could cost you a decent amount of frames, you could get a significant performance boost without sacrificing image quality with DLSS enabled. As RTX cards become more and more accessible in the future, this kind of technology could really bring the barrier down for 4K gaming.

Cyberpunk 2077's recent gameplay demo was also revealed to include DLSS 2.0 technology that allowed it to run at 60fps at 1080p with ray tracing enabled. Even Minecraft with RTX has benefited from the DLSS technology too.

Coupled with the recent reveal of Unreal Engine 5’s GPU performance being significantly better thanks to the Nanite technology, high performance gaming could be easier than ever to achieve with lower-end cards.

We could be seeing a real turn in the industry here, granted it may take a few years, but the costs of gaming on PC may very well become staggeringly less expensive, at least on the GPU side of things.

What do you think? Is DLSS a game changer? How will this affect the PC hardware industry? And will we see significant performance increases at significantly lower prices? Let us know what you think!

Its nice to see a PS4 game scale so well on PC. Sony should release their older titles on PC as they have nothing to lose. Older titles won't drive sales of next-gen and PC revenue means extra money for Sony.

Unless they want to sell "remasters", "remakes" and "reboots" of [insert game here].

DLSS aside, I hope it runs well coz this is same engine as HZD

In other words we downgraded the game so it will be able to run at 4K 60FPS on all of our Nvidia RTX gpus.

Considering the image quality to performance trade off, AMD really needs to come up with something similar or else RTX 3000 still looks to be better than RDNA2.

I'm particularly hoping that Nvidia will release DLSS as part of the driver options, so that we can "force" DLSS on any game from the Nvidia Control Panel, similar to DSR, FXAA, etc. They already talked about how DLSS 2.0 gets a more "universal" kind of training, as opposed to images from the particular games themselves, which leads me to believe they might actually do it some day. It would be super cool.

With all that in mind - AMD GPUs might surely fall behind, especially if what I wrote above happens.

Guessing u still need tensor cores to enable dlss in control panel?
But yeah the only thing holding this back is wide coverage of games.. it potentially more than doubles fps, thats a hard hurdle to overcome for amd if they dont come up with something.

Some sort of a chip will be needed to do the task fast enough so as to not take up valuable resources from the rendering pipeline. For Nvidia it is the Tensor cores, correct. AMD could have something of their own or even do it in the shader cores, but then it would tank the performance more than having dedicated hardware doing it, like Nvidia does.

Am I the only one who hasn't been amused by "60fps" in a long time? Nothing wrong with it for most people, but when you own a high refresh rate panel - you kinda grow out of that 60Hz pretty quickly.

DLSS 2.0 is great, though. Not perfect, it still has slight artifacts, but it's MILES better than 1.0 was. I just wonder how much extra input latency DLSS adds on top of the raw rendering.

Game a lot on 120tv. Now, I dont have a rig that can really push fps that much and I game with a controller.. so for me what really stands out for the tv vs monitor is the much better contrast ratio.
Would love to see a detailed analysis of DLSS2.0, coz my understandings is 1.0 was pretty much useless, worse than simple sharpening.

Initial google search seems to point to it being really really good! Upscales 1080p to 4k well. If it can do this with minimal performance loss, then even a 2060 can understandably run death stranding at upscaled 4k.

Have a look at Digital Foundry's video on DLSS 2.0 in Control - it shows the comparisons between the old DLSS and the new one. Quite the difference! v1.0 wasn't quite as bad as you say, but it was definitely not like the native resolution, whereas DLSS 2.0 is very close to that. I'd still prefer to play at native, as I'm a pixel peeper and I spot artifacting very quickly (professional hazard of being a graphics artist), but I'd like to give it a try anyway, especially with DLSS 4K/5K downsampled back to my 1440p screen.

Is the TV a true 120Hz? I've seen marketing go as high as "1000Hz" on TVs, but they're all still just 60Hz panels with various image processing nonsense. But even if it is a true 120Hz - yeah, you're not likely to benefit much with a controller. With a mouse - it makes a WORLD of difference, which is why everyone raves about it when they do try it (a few unfortunate blind people exist who can't see the difference for some reason, but what can you do xD)

Ya saw the DF vid on Control DLSS. Only skimmed it briefly though and havent watched the whole thing yet.

I wonder if you could get 4K120 via a more compressed signal. The reds suffer especially, but you might get a better framerate possible for 4K.

So DF observed 11% cost when u compare DLSS 1080p upscaled to 4K vs 1080p w/TAA. With the former almost as good as native 4k, thats pretty darn impressive.

Compression or chroma subsampling can help to a point but most controllers for those panels only allow a native setup for what the inputs can receive.

Not all people have your PC Rig my friend. Leave me to play with 60fps.

It doesn't matter what rig you have. There are plenty of games that you can hit over 60fps - and those extra frames are not shown to you. If you get a high refresh screen - you can see the difference even on a lower-end rig! :)

I'll believe it when I see it.

Not impossible, considering it would be running at 1080p and using a couple of milliseconds on top to run the DLSS upscaling. If the game can run that well at 1080p - it'll run as well at 4K DLSS, essentially.