It's finally upon us, arriving on PC tomorrow is Hideo Kojima's Death Stranding. Originally a console exclusive to PlayStation 4, this title certainly looks very pretty, but how does it perform in comparison? Has Death Stranding been optimized for PC players? Or are we stricken with a watered-down console port? We ran some benchmarks to see how well Death Stranding performs on PC and how demanding it really is.

Unfortunately Death Stranding does not include an in-game benchmarking tool, so for these performance results we hopped on a bike, drove around for a bit, and crossed a river before trekking up a small hill. It's pretty much the bulk of what you'll be doing in Death Stranding, so this should give you an idea of the kind of performance you'll be encountering most of the time.

With that in mind, let's jump into the performance benchmarks for Death Stranding on PC... 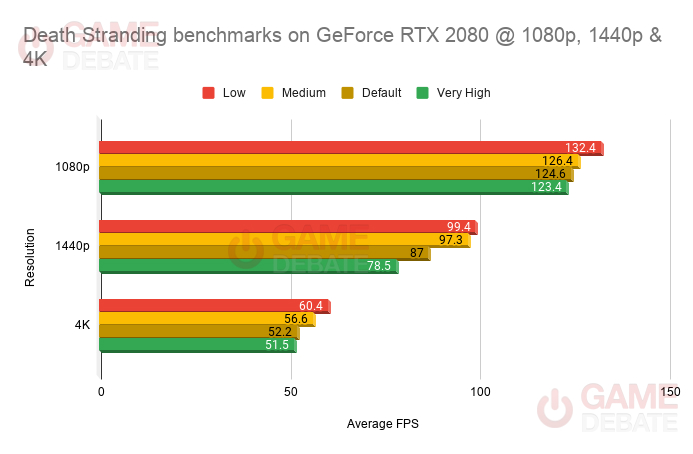 The FPS performance for the RTX 2080 in Death Stranding is unsurprisingly really good at 1080p screen resolution. This is a great setup for high refresh rate monitors who can go up to 120Hz. Overall, the RTX 2080 does a superb job at running Death Stranding with Very High graphics settings at 1080p. 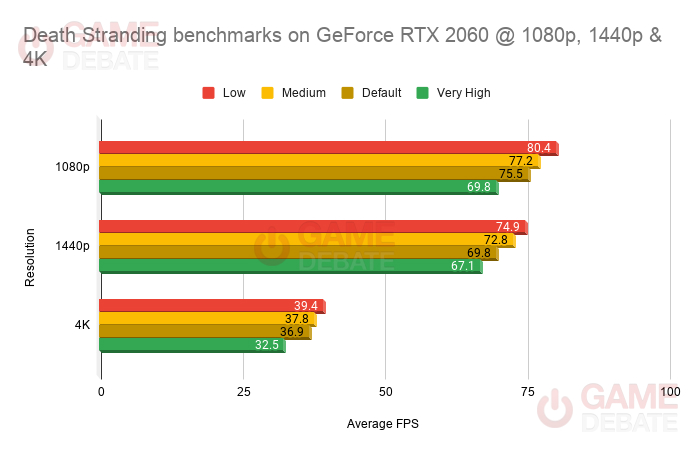 The RTX 2060 FPS performance results are very good in Death Stranding. Not only does it perform very well at 1080p, but the performance at 1440p resolution is also really good. However, at 4K the fps drops below 60, and whilst this is perfectly playable, it's not exactly a comfortable frame rate. Overall, the RTX 2060 is perfectly suitable to play Death Stranding at maximum graphics settings at both 1080p and 1440p resolution, whilst 4K is certainly playable but not recommended. 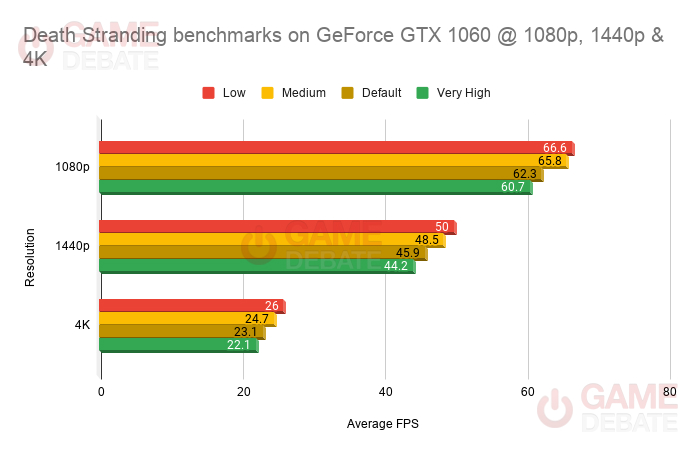 The GTX 1060 is the recommended graphics card for Death Stranding on PC, and the fps performance results show that this is absolutely the case. At 1080p you can play at the maximum graphics settings with 60fps average. 1440p is also playable even below 60fps, but is more comfortable around the Low-Medium graphics settings. 4K is unplayable at this performance and drops below 30fps even at Low quality settings. In the end, the GTX 1060 is perfectly suitable for gaming at 1080p and Very High graphics settings in Death Stranding, 1440p is also playable but 4K is not recommended at all. 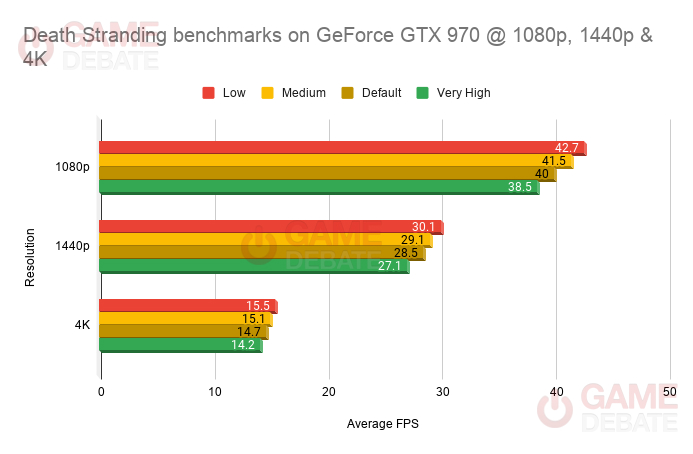 The FPS performance results in Death Stranding for the GTX 970 is not great, but still playable. At 1080p this GPU struggles to reach past 60fps even at Low graphics settings, although at Ultra settings it is still playable. 1440p is okay but only at Low graphics settings whilst 4K is definitely unplayable. Overall, the GTX 970 can certainly play Death Stranding at a comfortable but not ideal frame rate at 1080p, whilst 1440p and 4K are much less suitable. 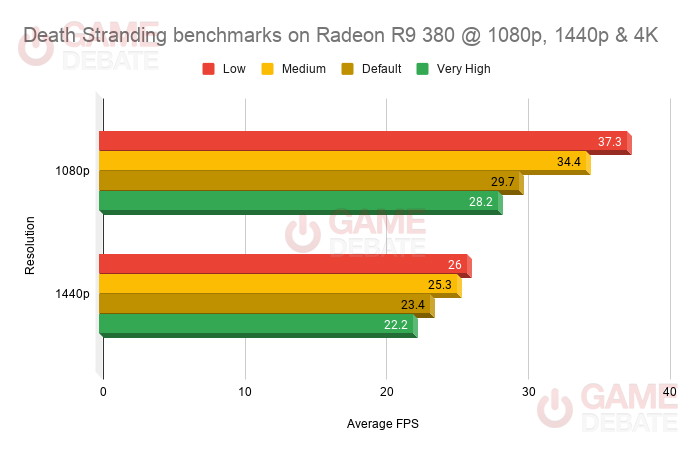 Overall we can see that Death Stranding is a pretty demanding game, even for the recommended graphics card the GTX 1060. Whilst higher-end cards certainly get the most out of performance, lower-end cards below the minimum and recommended system requirements really struggle to get a stable frame rate, resulting in crashes, uncomfortable frame rates, and even refusing to launch on cards like the R7 370.

Whilst it certainly has a decent range of graphics options to choose from and tweak for optimized performance in Death Stranding on PC, there isn't a whole lot of difference between Low and Ultra graphics options. You won't be saving lots of frames by turning down the graphics for instance, and the good thing at least is that Death Stranding certainly does not need to be above 60fps to feel comfortable, meaning you might as well keep the graphics high or even at their highest most of the time.

If you want to get the best out of Death Stranding, a high-end graphics card like the RTX 2080 is recommended for playing at 4K, but in terms of playing at 1080p or even 1440p then the recommended graphics card GTX 1060 is perfectly suitable. For lower-end cards you may need to get comfortable with 30fps and Low graphics settings, and you may not even be able to play the game at all if it's too low.

The good news is that all RTX cards have access to Nvidia's DLSS 2.0 technology, which allows for any RTX card to reach 4K 60fps in Death Stranding, according to Nvidia. Though in order to see if this is true, and how much exactly it increases performance, you can look forward to our full DLSS analysis and graphics comparison on Death Stranding PC when we publish it.

It's nice to see Kojima taking care of the PC port. Hopefully Death STranding will see success on PC too.

It would seem that i7-3770k bottlenecks RTX 2060 on this particular game because it shows that changing resolution from 1080p to 1440p FPS decreases a bit. Interesting...

Well worth the experience of this game. Besides, cookie clicker is also one of the stormy games in recent times. Don't know if anyone has tested it yet?

NVIDIA's GeForce RTX 3080 can be said to be the most sought-after card model in the new GeForce RTX series of cards launched in early September because of its impressive range of parameters, at a very affordable price compared to other cards. same performance as before retro games online. Recently in this game test, NVIDIA's GeForce RTX 3080 was evaluated against the standards of AAA games and including 3DMark's tests.

Retro games are among the most enjoyable and limitless classic games available. It features a lot of different ways to play, so give it a try!

I am fed up with Death Stranding news

I haven't seen something boring like this in a loooong time.

Not really a fan of the game, but good PC ports are always welcome.

It would seem that i7-3770k bottlenecks RTX 2060 on this particular game because it shows that changing resolution from 1080p to 1440p FPS decreases a bit. Interesting...

Thank heavens tht I can atleast play 30fps locked at ultra settings on my 970.

It's nice to see Kojima taking care of the PC port. Hopefully Death STranding will see success on PC too.