Just in case you were wondering whether Bioware is still working on Dragon Age 4, or put it on the back bench for now as most of the team works from home and still committed to overhauling Anthem, then don’t worry because executive producer Mark Darrah recently tweeted that yes, they are still working hard on the next Dragon Age game.

Unfortunately there’s nothing more to it than that, any information that we’re getting at the moment on DA4 is being very slowly drip fed to us, just so that we don’t forget. It’s still years away from being finished though, but thankfully there doesn’t seem to be anything major holding the team back right now. 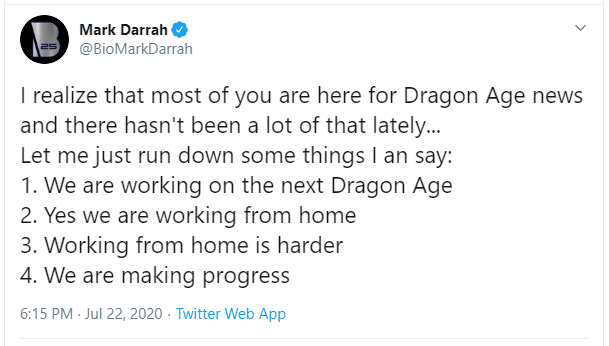 He later responded to his own tweet with “I honestly don't understand the pickup of this… Am I magic?” Seemingly unaware at the newsworthiness of such an announcement because, let’s be honest, all that Dragon Age fans want is another Dragon Age game, whether that’s 6 years on from the last one, or 5 minutes since release, we just want more!

The last bit of info we got for Dragon Age 4 were a few little rendered screenshots during the EA Play Live event, and before that a teaser trailer back in 2018. At this rate we’ll be getting a proper trailer in 2022.

5 .We havent made a really good game in a while.

Not very hopeful of Dragon Age 4. EA already cancelled the game which had an interesting narrative and had side activities like launching your own spy missions with recruits like Leliana's crew and stuff.

Now they are making Anthem with Dragons!

Hopefully this will be the one Bioware proves themselves as capable developer, unlike their late releases, granted demise of those was EA aided. Hopefully EA learned something from Respawn and Fallen Order, we will have to see.

5 .We havent made a really good game in a while.