Obsidian Entertainment is working on yet another unannounced game, most likely another RPG

Obsidian Entertainment is rather busy at the moment, not only have they just released the Early Access version of their survival game Grounded, but they’re also set to release a chunky bit of DLC for The Outer Worlds this year, and they’re working on a mysterious new Fantasy RPG called Avowed. But it seems like that’s not all, and they have at least 1 other title up their sleeve.

Video game designer Josh Sawyer recently put up a blog post describing what his job as a Studio Design Director actually entails. Sawyer previously directed Fallout: New Vegas and both Pillars of Eternity games, and when one fan found out he wasn’t exactly directing his own game at the moment, Sawyer had an interesting response. 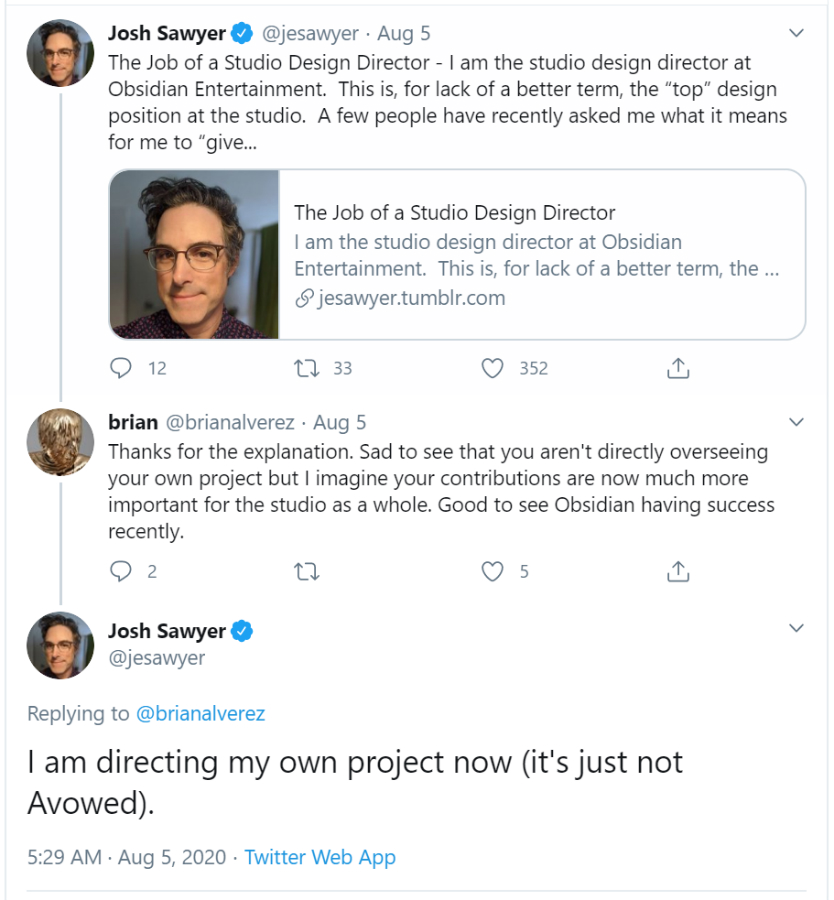 “Thanks for the explanation,” the fan said. “Sad to see that you aren't directly overseeing your own project but I imagine your contributions are now much more important for the studio as a whole. Good to see Obsidian having success recently.”

To which Sawyer replied: “I am directing my own project now (it's just not Avowed).”

There’s lots of speculation as to what he’s working on now, but it’s certainly surprising to see that it’s not avowed considering it is part of the Pillars of Eternity world and Sawyer directed both those games as well as another critically well-received first person RPG in the Fallout universe.

Still, with 3 projects already on their plate and now this one on top, I can imagine it must be very early in development as most of the team will be working on the projects that have already been announced. It’s even possible we won’t hear anything more about this until something of a year from now. Whatever it is though, it’s most likely another RPG given Obsidian and Sawyer’s track record.

What do you think? Are you excited for yet another Obsidian game? What could it possibly be? And which one are you more excited for? Let us know!

Meh. New Vegas was in my top 5 games of all time, and really got me hyped for Obsidian as a company. But after being greatly disappointed by The Outer Worlds, and finding Pillars of Eternity to be just okay, I'm beginning to suspect New Vegas was an outlier.

I really enjoyed The Outer Worlds.. Story was good, but I didn't like how linear it was. . Not that everything needs to be open world, but I just feel like it really would've benefited from it. And also PoE 1 to me was just okay, not a big fan of RTP RPGs, so with 2 and it's Turn based system, I enjoyed it much more.

But I do agree. NV is top 5 all time for me, and it stands to this day. I've played that gamed dozens of times over the past decade, and will continue to.