If you’ve been sitting around anxiously awaiting more news of Cyberpunk 2077, then don’t worry your fix is coming soon. CD Projekt Red announced that the second episode of their Night City Wire livestream will be airing August 10th (this coming Monday) and will be showing off more of the game’s features and characters.

More specifically, we’ll be getting a deeper look at the different lifepaths players can take with their characters, some new weapons, and how a Swedish rock band known as Refused was transformed into the in-game’s titular rock band Samurai led by Johnny Silverhand, AKA Keanu Reeves. The announcement was made on Twitter: 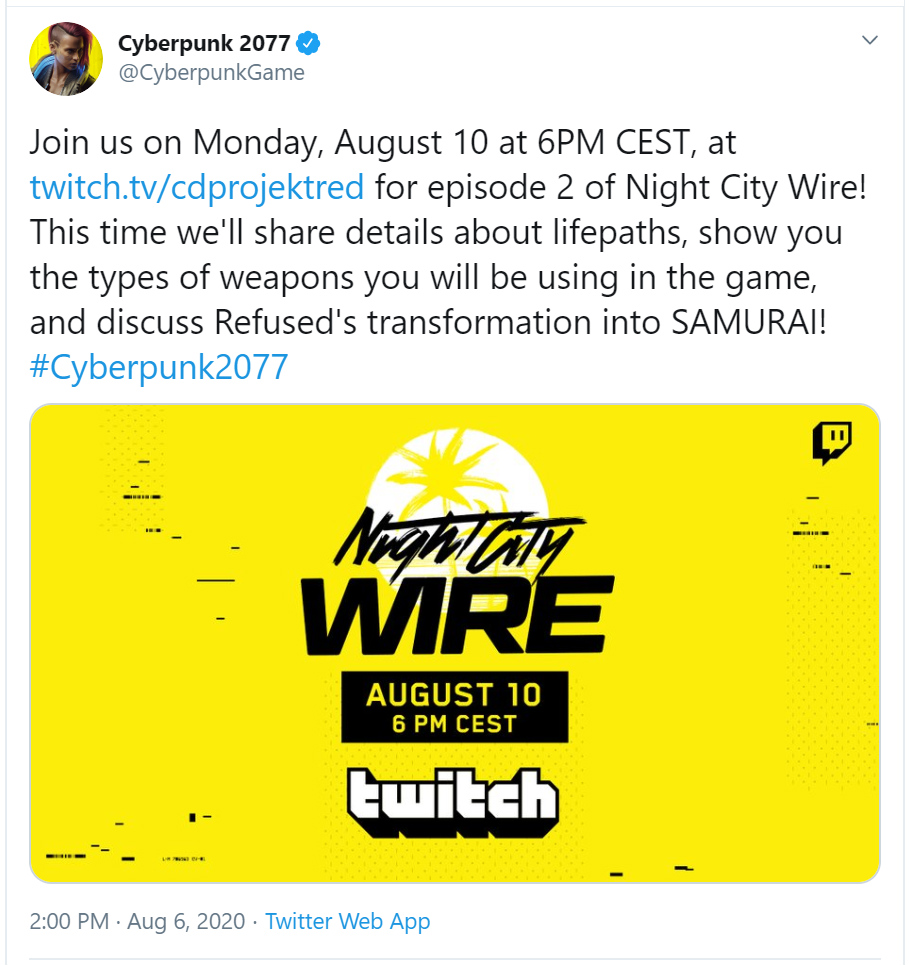 “Join us on Monday, August 10 at 6PM CEST, at https://twitch.tv/cdprojektred for episode 2 of Night City Wire! This time we'll share details about lifepaths, show you the types of weapons you will be using in the game, and discuss Refused's transformation into SAMURAI! #Cyberpunk2077”

Episode 1 brought us a lot of juicy gameplay to gawk over, including a new Braindance feature as well as a new trailer and the announcement of a Cyberpunk Anime for Netflix.

What do you think? Are you excited for Episode 2 of Night City Wire? What more would you like to see for Cyberpunk 2077? Let us know!

Will you be watching Night City Wire Episode 2?

I still can't reconcile with first person only view...

I, honestly, lost most of my interest.The current colourfull,open world "GTA -Watch Dogs 2-Rage 2 style" do nothing for me.The revel trailer had dark,gothic,feelin hopeless kind of vibe.The more they show,the more its strays away for me.Will play it for sure,but somewhere down the line.

New aesthetic is actually closer to original CP2020 in some aspects

Not going to bother watching it. I only seen like the first few minutes of the last one and I think even that was too much.

Better to go into games totally blind these days.

Still no news about the system requirements for PC?

I've gotten to the point where I think I shouldn't watch this, so there's some actual surprises to the game aside from story, yet know deep down I don't have the self control and should just give in immediately.

Yeah, i watch these stuff because it helps bringing my hype down a little bit (the lack of car customization bad close combat, meh driving, cant stick to walls like freaking spiderman and then slipe some poor dude from above, etc), so when it gets released, i wont be dissapointed, i dont think it will be a a bad game but definately not perfect either.

I read, don't remember where, that only wall running was removed and wall perching was still in. I looked for a source though and couldn't find it so maybe I'm going crazy.