Halo Infinite has been delayed until 2021, multiple factors listed as reason for delay

It’s almost inevitable at this point that every game announced to come out this year will be delayed by some amount. Halo Infinite is the next title to get delayed this year, based on multiple reasons including the continued COVID-19 pandemic. This comes after Vampire the Masquerade Bloodlines 2 was also delayed until 2021 with Dirt 5 following shortly after with a week’s delay.

In an official post on Twitter, Chris Lee, the Studio Head of Halo Infinite, said: “we have made the difficult decision to shift our release to 2021 to ensure the team has adequate time to deliver a Halo game experience that meets our vision.”

The reason for the delay is apparently based on “multiple factors” which includes the ongoing coronavirus pandemic that has impacted the development of numerous titles this year and forced developers to work from home. Lee then praised the hard work of the development team, but followed with: “however, it is not sustainable for the well-being of our team or the overall success of the game to ship it this holiday.” 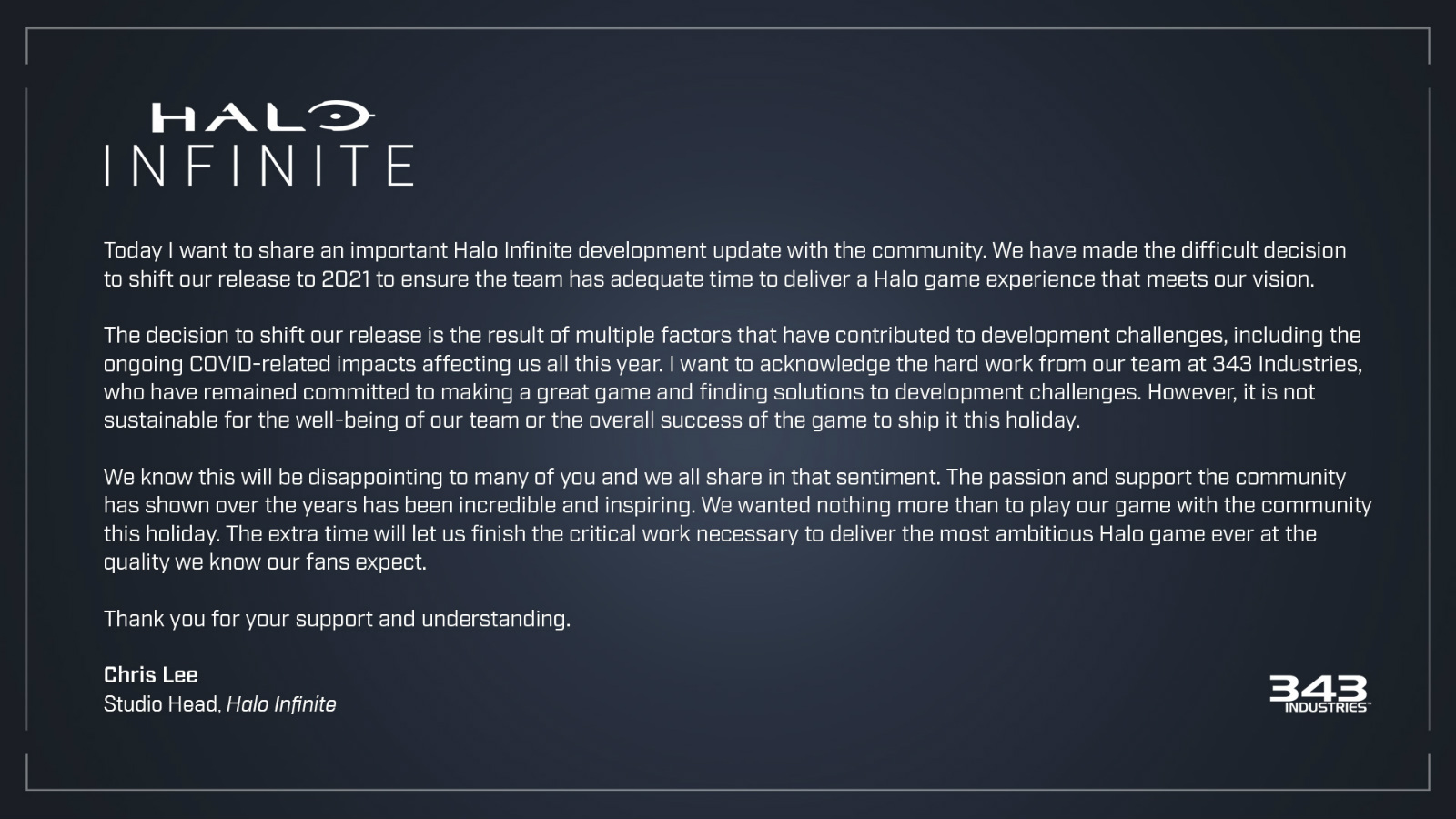 I would guess that one of those “multiple factors” also included the recent negative feedback received from the Xbox showcase regarding the game’s graphics, even though the game was running on an early build on the PC.

However, Lee finished with “the extra time will let us finish the critical work necessary to deliver the most ambitious Halo game ever at the quality we know our fans expect.” It’s certainly a very surprising decision considering Halo Infinite is pretty much the face of Xbox, and was certainly meant to headline the Xbox Series X’s launch this holiday. Which means the reasons for this delay must be pretty substantial.

What do you think? Were you excited for Halo Infinite? What other reasons could have led to the delay? And what other titles do you think will be delayed this year? Let us know!

Were you excited for Halo Infinite this year?

I'm fine with that. Gives me at least 3 more months to get through Horizon Zero Dawn.

I'm one of the few blessed with a positive experience it seems. I haven't had one crash yet, just a few small dips when in towns. Out in the open world it runs flawlessly. Haven't had an audio blip in 2 days now.

Not GOAT status for me, but so far definitely in my top 10 of all time. Love the combat, very intense.

Whether it's COVID-19 or something else, it's good that they delayed it, the game just wasn't acceptable in it's current state. I hope they take their time and improve the game :). Delaying a game isn't always bad as some people think.

I was really looking forward to it, but I can wait. I think this is a huge drawback for the new Xbox's launch though. This was THE game to get an Xbox for if you don't have a powerful enough PC to run it already. I guess its not all sunshine and rainbows in Microsoft right now.

A big part of the problem as been confirmed by an insider (who understandably remains anonymous), things are a real big mess in 343 industries.

Have barely touched the MCC even though I loved the original Combat Evolved and Halo3. I want to see what Halo 4 is like first to see what 343 Industries' own games are like first before I commit to Infinite.