AMD's Radeon RX 6000 will not be a paper launch, says Chief Architect

Thanks to the recent announcement of Nvidia’s next-gen RTX 30 series graphics cards and the fact that next-gen consoles are right around the corner, everyone is fighting to obtain some of the most powerful PC hardware you can buy today. Unfortunately Nvidia seems to have underestimated the demand, as all stores were sold out almost immediately after release.

This now puts a bit of pressure on AMD, as they themselves are gearing up to launch their own next-gen Radeon RX 6000 GPUs on October 28th. Now some users online are afraid that AMD will be a “paper” (or, “soft”) launch. But according to Frank Azor, the Chief Architect of Gaming Solutions and Marketing at AMD, that won’t be the case.

Responding to a disappointed user who couldn’t get their hands on an RTX 3090 yesterday, who said “$10 says AMD will be a paper launch too,” Azor responded coyly with: “I look forward to taking your $10 :)” 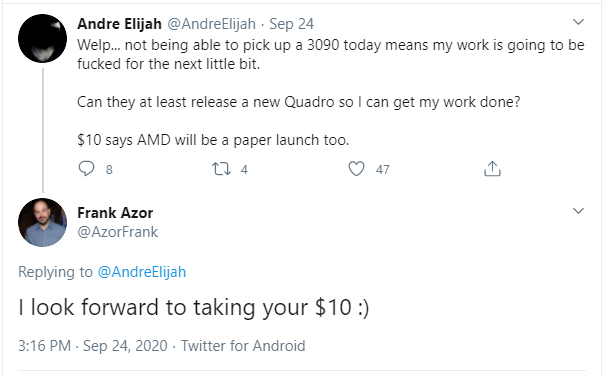 Obviously this has caused many to believe that AMD will have a much bigger stock at launch than Nvidia, but Azor has since confirmed that all he meant by that comment was that AMD will definitely not have a soft launch for the Radeon RX 6000 series.

So basically it’s not confirmed that AMD will have a bigger launch and stock available than Nvidia, but they certainly won’t be expecting a small launch either. Hopefully AMD will be able to find a way to stop a bunch of scalpers and bots from buying dozens of cards and then selling them for higher prices on Ebay.

What do you think? Are you excited for the Radeon RX 6000 series? Do you think the launch will be similar to Nvidia? Or will AMD last a few more seconds before going out of stock? Let us know your thoughts!

Are you excited for the Radeon RX 6000 series?

How fast do you think they will sell out?

And why is the nVidia 30xx launch considered a failure? is it the GPU or the out of stock?

When the Hell will AMD mutli chip GPUs come? the ones similar to AMD zen wherin you have multiple chips stuck together with glue if you belive the folk at intel

Covid has more of a role then most will believe...

Indeed, for example power supplies just barely hold stock even when they are universal unlike gpus. Pc tech during quarantine is all time high in demand, gamers havent had good high end offering since 1080ti so it just adds up, i think rdna 2 launch will be just as bad. Remember this insane demand is even for high end gpus where it doesnt make bulk in sales, rtx 3070 and rdna 2 will be bloodbath.

The 30 series wasnt a paper launch there was as much inventory as the 20 series. The demand was insane because of the lukewarm reception of the 20 series and covid´s work/play from home. Nvidia could have stocked up more inventory but it wasnt quite as bad as the meme´s would make you believe. AMD has a very good opportunity to undercut nvidia a lot by sliping a gpu thats slightly better that a 3080 but maybe not as good as the 3090.

As someone who tried to buy a 3080 from 4 different sites in the seconds preceding, and in the minutes proceeding, the release time, I truly feel as though it is as bad as everyone is making it seem.

As a long-time Nvidia user who's bought pairs of high-end cards during the last 3 launches I say... I hope AMD kicks their a$$es!

Seriously, I've never seen such a sh|tfest at launch and I hope something happens so that they straighten up... It's absolutely ridiculous at this point and there's only so far they can reasonably push their excuses (including covid). I'm kinda stuck with Nvidia due to work and..I do like the products.. but they're pushing it now...

Sooooo you're gonna go for the 3090 SLI I presume? Now that would be something. And I agree with you, this launch was a fairly big dissapointment.

Lmao, nah, not at the start anyway. SLI support has been crap and I'm not ashamed to admit it. The CUDA enhancements in the new GPUs are also SO GOOD that I can replace my two 2080Tis with one 3090 and still render faster. Go figure :)

Yeah with everything else going on this year, the 3090 actually seems promising haha. Hopefully it'll speed up your workflow a fair amount, it's looking great so far even without driver optimizations

Most of my work is CPU-based anyway but we have the time, so even 5960X CPUs deal with it, just takes longer. GPU stuff is more personal work, rather than the work for my company, and various AI and CUDA applications, as well as accelerating the CAD workflow.

I agree, also i was thinking, what would be better in your opinion: premature nvidia gpu launch like now but limited stock or delayed launch like 2 months but with ok stock?

Hmm but pre orders might push your guaranteed gpu shipment for 2 months... Currently its really crappy experience refreshing pages and searching for availability like gold but at least there is chance of getting one fast

Yeah but how will they charge you another 10-25% more due to low stock and high demand you silly silly man. Honestly I feel like the 700$ price tag was a lie and they were hoping for this to happen so they could increase the cost after the first batch got sold out.

I had to wait for over a month for my 2080Ti shipment after I placed the order when pre-orders opened during the live stream unveiling... I've lived through that - I can live waiting 2-3 months for a guaranteed FE card at MSRP. Anyone who can't wait for some reason should rethink their lives...

Agreed to an extent. I myself ordered the zotac variant of the 3080 which is turning out to be the worst one of them all. The only reason why I still haven't canceled is out of curiosity to see if they will actually ship it. Right now I'm probably just gonna wait out for an eventual 3070 ti/super or AMD equivalent.

The 700€ price tag was already pushing it for my budget meaning I cant buy the other things my setup needs replacing/adding. Maybe one day I'll be able to afford a top end gpu but today is not that day. What worries me about the 3070 though is that the consoles also have a 2080 ti equivalent card so it'll age worse.

I would not be so quick to judge. These will be AMD cards, so raytracing will be 1st gen and god knows what else. We know nothing concrete about the performance and the "4K" promise will likely not include 60fps at the same time for many AAA titles. The rumor mill has it that AMD will are taking DLSS seriously, but since they are not in the AI business and their funds are not as unlimited as Nvidia's - who knows what the quality will be like. I have a feeling that consoles might be using a DLSS equivalent to keep the performance decent.

If the console games will be utilizing something like AMD's "DLSS" open-source equivalents - this would actually be great for us PC gamers as well, since more/most titles will be easier to run. It's an exciting future :)