The upcoming space sim Star Wars: Squadrons is nearly upon us, but it’s all a bit confusing as to what time you can preload the game and exactly when you can play it. So with the game releasing soon we wanted to compile an official list of release times for each region and when exactly you can start preloading Star Wars: Squadrons.

What’s very weird about all this is that preload and launch times are different for various platforms. For instance, if you bought Star Wars Squadrons on Steam or the Epic Games Store, then the game will unlock at exactly midnight UTC (see table below for time zone conversions).

However, if you purchased SW Squadrons through another platform like Origin, then the game will unlock at midnight in your local time zone. 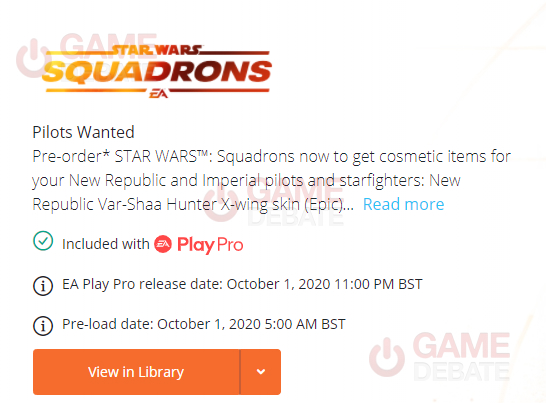 Of course, not all of us want to wait until midnight to start downloading a large game, especially if we don’t have the best internet. So if you want to pre-download Star Wars Squadrons then here’s all the re-load times for each region:

So for those living on the US West Coast like Los Angeles pre-load times will start at 9pm tonight (September 30th), whilst those living on the US East Coast like New York will have to wait until midnight tonight (11:59pm September 30th) in order to start pre-installing the game. For everyone in the UK that’s 5am tomorrow morning, or 2pm tomorrow for anyone living in Australia.

It's important to note that if you have an EA Play subscription, SW Squadrons is not available for early access ahead of the release date unfortunately.

What do you think? Are you excited for Star Wars: Squadrons? Will you be pre-installing the game? What are you doing to get ready for this peripheral-friendly space sim? Let us know!

Are you excited for Star Wars Squadrons?

I will try this on Game Pass for PC first.