World of Warcraft Shadowlands has been delayed until later this year

Blizzard has announced that the new expansion for World of Warcraft has unfortunately been delayed and won’t be launching on October 27th due to additional time needed for some polish as well as some challenges that resulted in working from home during the ongoing COVID-19 pandemic. Currently there is no new date planned for the launch of World of Warcraft: Shadowlands.

“I wanted to let you know that we’re delaying the release of Shadowlands to later this year,” John Hight said in the official post. “However, as everything started coming together and we’ve been listening to and building upon your feedback, it’s become clear we need a little more time for additional polish.” 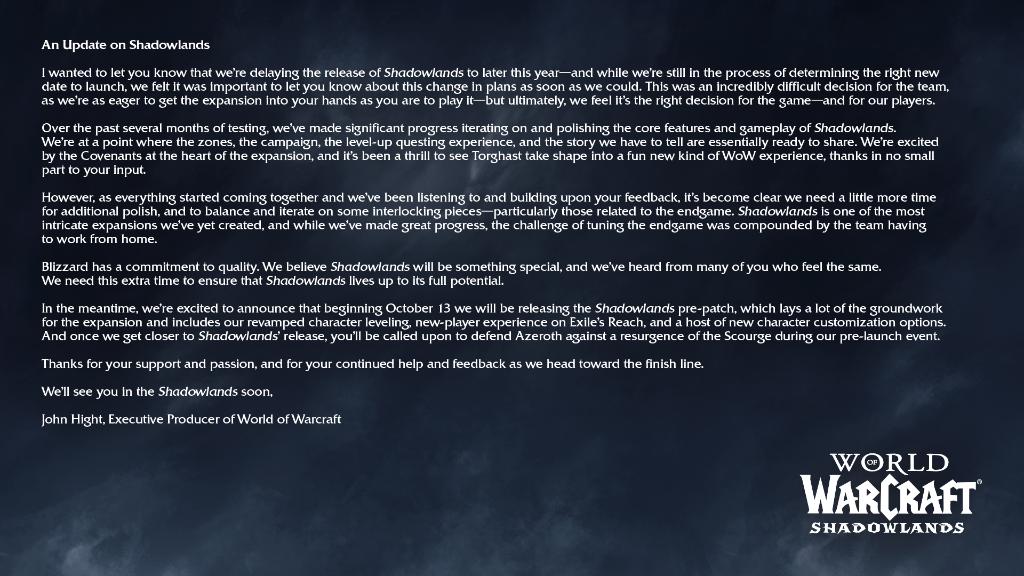 So at least WoW Shadowlands will still be releasing in 2020, and the good news is we don’t have to wait that long for some new benefits either as the Shadowlands pre-patch will release on October 13th, which includes a revamped character levelling system, a new starting area on Exile’s Reach, and a lot of new customization options for characters.

There’ll also be an undead Scourge event that will happen closer to the official launch of Shadowlands, whenever that may be.

What do you think? Are you excited for World of Warcraft Shadowlands? How long have you been playing WoW for? Let us know!

Are you excited for World of Warcraft Shadowlands?