We're just a couple weeks away from the official launch of Watch Dogs Legion, and Ubisoft previously gave us a pretty extensive selection of PC system requirements for 1080p, 1440p, and 4K resolutions as well as ray tracing requirements. Well, they've since been updated to include the new RTX 30 series graphics cards, so here's the updated requirements and what's exactly changed.

First of all, most of the requirements for Watch Dogs Legion have been budged up a little bit, though there are a few requirements that have actually gone down. All in all, if you were just teetering on the edge of your preferred specs, you may want to double check again to see if you're still at the same spot.

The first and most notable change is the minimum requirements for Low graphics settings at 1080p resolution, which has been bumped up from a GTX 960 to a GTX 970, and has also seen the addition of a GTX 1650 as well. RAM has also been clarified to be an 8GB dual-channel setup here.

Moving on to 1080p High settings requirements, the only change here has been the addition of the GTX 1660 Super card. Which is odd considering the GTX 1660 non-Super was already slightly better than the GTX 1060, and was more on par with it in terms of performance.

As for 4K Ultra requirements, the CCPUs remain untouched but here is where we see the first RTX 30 series card introduced as a requirement, with the RTX 3080 listed alongside the RTX 2080 Ti. Interestingly, the 3080 seems to have outright replaced the AMD Radeon VII graphics card, but no reason was given as to why. 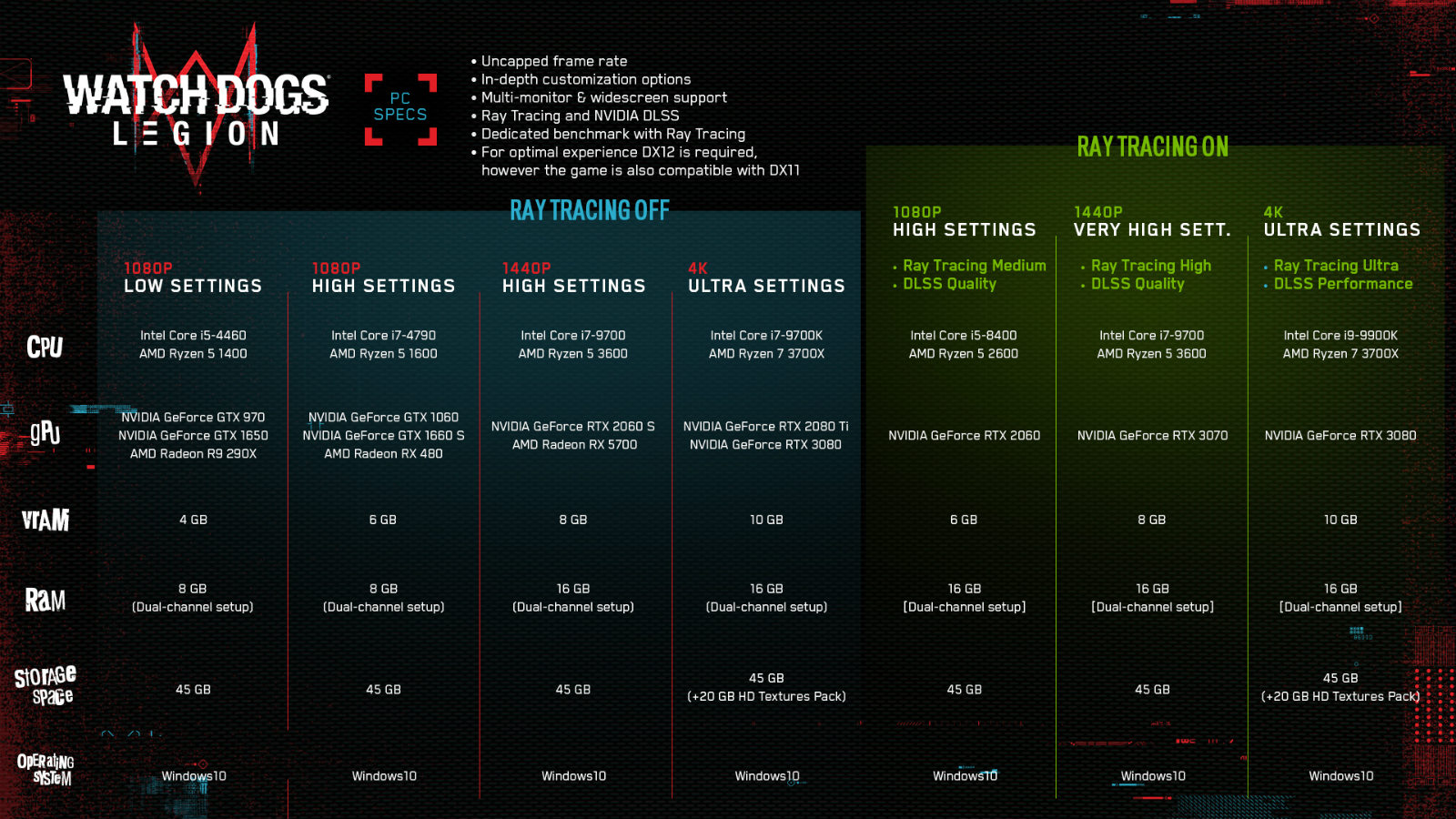 If we move onto the ray tracing specs, the requirements have actually decreased in some areas allowing for more accessible specs. Ubisoft has also added a separate 1440p requirements for ray tracing as that was noticeably lacking in the previous requirements. We've also been given the exact kind of ray tracing quality settings we an expect at each level along with their respective DLSS setting for best performance.

The 1440p Very High graphics settings with ray tracing enable is a brand new column, which just sees the addition of the RTX 3070 GPU (which has yet to be released and, oh would you look at that, launches the same day as Watch Dogs Legion now). These specs will be able to deliver High ray tracing quality settings at DLSS Quality mode.

Finally, for the 4K Ultra settings with ray tracing enabled, the RTX 2080 Ti has been replaced by the RTX 3080. Whilst both cards are relatively similar in performance, the Intel CPU requirement has actually been increased to a Core i9-9900K from the original Core i7-9700K.

Lastly, Ubisoft has now noted that for optimal performance the DirectX12 API is recommended, but both DX12 and DX11 will be supported.

Now with all that out of the way, let's jump in and take a look at the updated Watch Dogs Legion PC system requirements...

(*Previous AMD hardware listed the Radeon VII graphics card but was removed in favor of the RTX 3080. We've added it back in here in square brackets so you know the AMD equivalent hardware needed for 4K Ultra graphics settings)

In order to play Watch Dogs Legion at the recommended system specs at 1080p resolution, you will require at least a GTX 1060 or GTX 1660 Super or Radeon RX 480 graphics card. Either one of those GPUs will work fine, but you should then pair that card with either a Core i7-4790 or Ryzen 5 1600 processor as well as 8GB of system memory in a dual-channel setup. These specs should then deliver around 60fps on High graphics settings.

The minimum required specs to play Watch Dogs Legion are now a GTX 970 or GTX 1650 or Radeon R9 290X GPU coupled with a Core i5-4460 or Ryzen 5 1400 CPU. You should then also pair this hardware configuration with at least 6GB of RAM in a dual-channel setup for the best performance. This should then deliver around 60fps at 1080p resolution on the Lowest graphics settings available.

Looking over all the specs needed to run Watch Dogs Legion, it is recommended to have a PC with at least 4 years old hardware or younger inside. You should also make sure that your GPU supports either DirectX 11 or DirectX 12, as DX11 is required to play WD Legion but DX12 is recommended for the most optimal performance.

Now i wish CDPR did the same thing for Cyberpunk.

Should be fine for High/ultra, maybe rtx on medium

So I should be able to play on windows 7?

This game running on at 1080p 60 fps and High settings is a bald-faced lie at the very least. Highly doubt Ubisoft's claims.

I know system requirements are not that accurate but seeing current gen game to recommend 10gb vram doesnt give much assurance that rtx 3080 will last that long.

Yeah, that 10GB buffer is extremely lackluster. Would be fine for DLSS-only gaming at high resolutions, but not at native. A total gimp, which is why I never even considered the 3080 as an option when the 3090 exists.

Idk, everyone was panicking about the 1060 3gb not having enough memory for 1080p gaming, yet nvidia seems to be doing their usual driver magic and the card can just keep up with the 6gb model just fine.

I don't know which benches you're looking at, because the 3GB variant is clearly behind the 6GB in many benchmarks, primarily due to running low on VRAM. I even quickly pulled up Steve's (GN) review of the two cards to make sure I'm not dreaming. Since it's ever-so-slightly cut-down vs the 6GB variant, it is consistently a couple fps down, but in some titles you could be looking at a large difference...

@Xquatrox yeah also i heard reports that if you use ddr3 based system also with HDD you will encounter huge lag spikes as soon as you run out of vram on 3gb vresion of 1060.

@xquantrox even on the screenshot you linked the average fps is the same, besides the 3gb has 10% less shaders so it is necessarily few fps behind

@Tforulez - that's a benchmark run. The reason the avg fps is "the same" is because the card didn't yet have a chance to run for long and didn't run out of VRAM for long enough to impact the average (the fps dip is still visible on the flowchart!). The point of that screengrab was to show a snippet of a real-time run that shows how fps just tanks when the card runs out of VRAM. Honestly, do I really need to explain the basics here? It's all right there in the screenshot!

Very nice information and presentation, more devs should do like this. At first glance at the tittle i thought for 1440p it will require rtx 3080, glad its not the case... :D

So that's the first DX12-supporting title by Ubisoft?

A DX12 "mode" will never really be as good as a game that's natively developed in DX12. We've seen that too many times.

If it only has dx12 then it is hard to compare how good that native version really is... if it has dx11 or vulkan version too then there is an obvious point of comparison

To my knowledge, aside from a few cases dx12 performed either worse or the same as dx11 or vulkan where alternatives were available...

"To my knowledge, aside from a few cases dx12 performed either worse or the same as dx11 or vulkan where alternatives were available…"
You are literally proving my point here... I've seen the same things myself, but usually at launch where the implementation was sloppy. After updates, games like HITMAN, Tomb Raider, Deus Ex, etc performed much better under DX12 than DX11. The reason? The whole damn thing was created with DX11 in mind - the APIs used, the programming, the shaders... You can't just swap out an executable and make it work flawlessly.

Now...whether or not the game runs well is beside the point, since it WILL be graphically demanding either way. The main difference is that there's no DX11 to drag down the CPU performance.

Oh... I just noticed that WD:Legion will, in fact, support DX11... damn it... Well, I sure hope the DX12 implementation isn't an after-thought as it was with Square Enix's games at launch (again - they did patch things later on)

Pretty ok system requirements, ofc it will get crazy if you want RT on, but seems like i should be fine on high /ultra settings 30-40 fps

Now i wish CDPR did the same thing for Cyberpunk.

Yeah, i would like them to do the same too.

Cannot possibly be much different than this

I'm just saying how would i like them to do it, whether they'll do it or not is not my problem :D. I just liked how Ubisoft did this with Watch Dogs Legion. That's all.

Not necessarily as CDPR is not in the business of lying to its customers. I highly doubt this game will run @ 1080p and 60 fps on High Settings with a GTX 1060. Ubisoft promised much lower GPU requirements for AC Origins and Odyssey and that was a bold-faced lie. A GTX 1060 couldnt get locked 45 fps in those.

I know they are different engines but I highly doubt these requirements. They publish lower than usual requirements to push the games into the hands of the masses and with pitiful 2 hour refund windows on storefronts, that's a guaranteed sale.

The requirements are for high settings and the 1060 is faster than the current gen consoles so it is possible it can do high 60 fps (i am hoping so) we will see tho...

i like how you updated for ram dual channel. I doubt people nowadays with its DDR4 goes 2 sticks since 1x16gb is worse than 2x8GB DDR4 ram