We're just under a month away from the official release of Assassins Creed Valhalla, and just like Watch Dogs Legion, Ubisoft have provided us with some pretty extensive system requirements so we can customize the game to get the right look and performance we want.

However, at first glance, the PC system requirements for Assassins Creed: Valhalla are pretty demanding. The usual GTX 1060 that we usually see under recommended requirements is now set for 1080p 30fps, whilst if you want that coveted 60fps performance at 1080p you'll need a GTX 1080.

There are some other interesting bits of info as well, like how AC Valhalla will be using the DirectX12 API exclusively, meaning there's no other API to go down to if your GPU doesn't support it. Thankfully a lot of modern cards support DX12, so you should be fine if you own a recent graphics card.

Additionally, AC Valhalla will come equipped with in-depth customization options, an uncapped frame rate (though there will be a frame limiter if you want to turn it on), hybrid input for use of both controller and keyboard and mouse at the same time, support for multi-monitors and widescreen monitors, as well as an in-game benchmarking tool.

Finally, Assassins Creed Valhalla does not include any ray tracing effects, and so doesn't have any ray tracing requirements. However, it does seem like there is room for a 4K 60fps option that an RTX 30 series would slot nicely into, though Ubisoft may be waiting until AMD unveils their new and upcoming Radeon RX 6000 series. 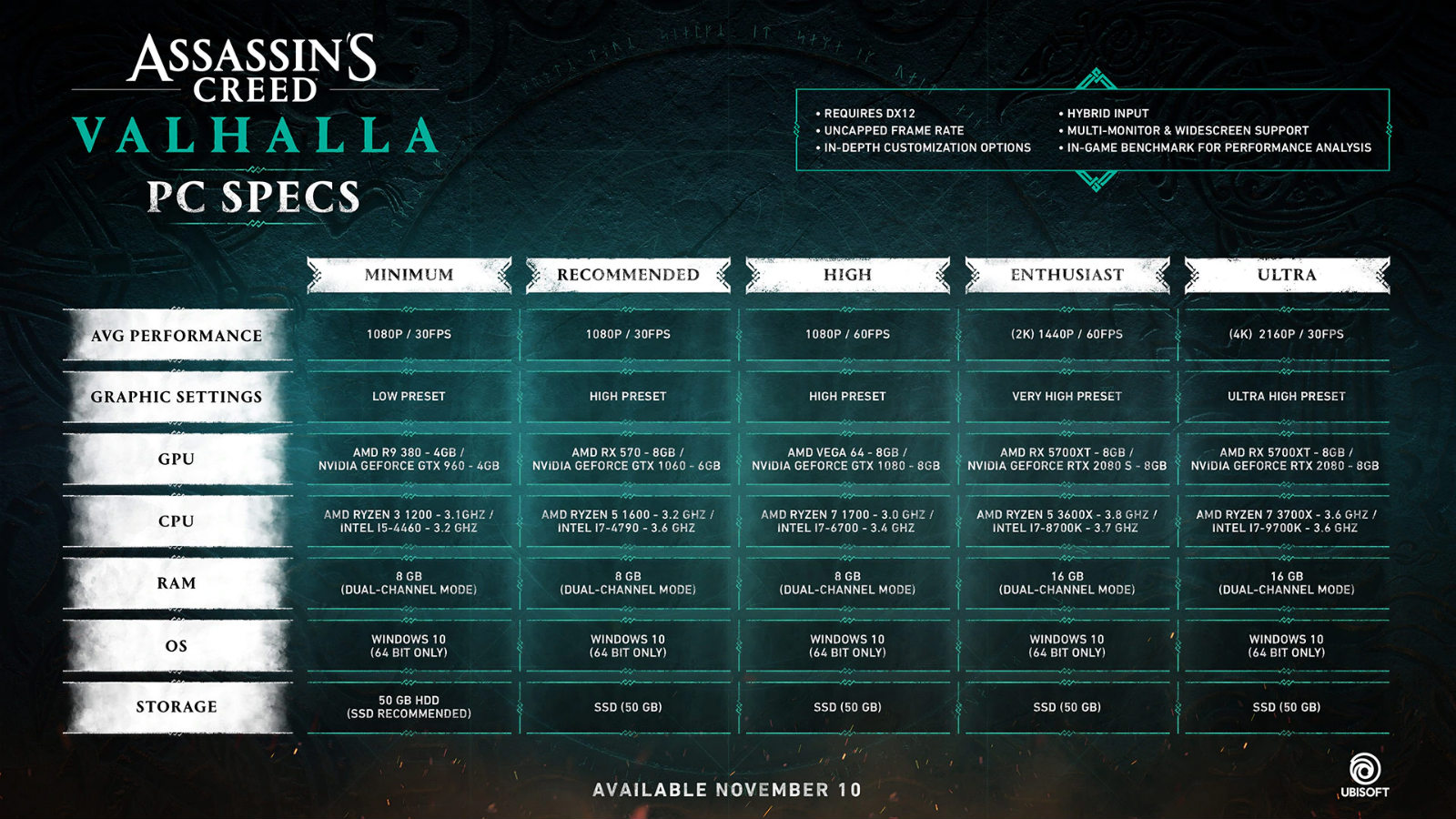 Ubisoft also provided an additional 1440p 30fps option on their website but didn't include it in their PC Specs image above. So we've included down below in case you would like to see it. It's also worth noting that an SSD is recommended at the Minimum requirements, but not necessary. However anything above that an SSD is required for optimal performance.

With that all said, let's dive in and take a look at the Assassins Creed: Valhalla PC system requirements...

Assassins Creed Valhalla will require a graphics card that's at least as powerful as a GeForce GTX 1060 or Radeon RX 570 in order to meet the recommended specs. You should then pair this GPU with either a Core i7-4790 or Ryzen 5 1600 processor and at least 8GB of RAM in a dual-channel setup. This setup will deliver around 30fps at 1080p resolution on High graphics settings.

In order to meet the minimum system requirements for Assassins Creed Valhalla you will need at least a GeForce GTX 960 or Radeon R9 380 GPU as well as a Core i5-4460 or Ryzen 3 1200 CPU. This should then be paired with 8GB of RAM in a dual-channel setup, delivering 30fps performance at 1080p resolution on Low graphics settings.

Finally, make sure your graphics card supports DirectX12 or you will not be able to run AC Valhalla at all. Looking over all the system specs, Assassins Creed Valhalla will need hardware that is around 4 years old to run at the recommended settings.

I'll give credit where credit is due - at long last someone is starting to state the resolution, settings and fps target in the system requirements! That is great to see instead of "minimum" and "recommended", which almost never used to come with any meaningful targets/metrics.

Difference between optimization and demanding. People really need to stop making that mistake. Unoptimized is a game that dips fps all the time, including horrid frametimes and lag. This game like every other AC game is DEMANDING not unoptimized.

Why has every Ubisoft game become so "DEMANDING" lately?

werent they always demanding except few games here and there?

Once upon a time, drunk Microsoft team dropped huge Internet Explorer logo with helicopter in front of Netscape headquarter building... Could someone please make giant tablets explaining difference between unoptimized and demanding, plus explanation of what optimizing is on parking lot in front of Ubisoft headquarters please. Because I am not sure if Ubisoft ever heard of optimizing. :-D

Its like Moses brought three tablets of game design to Ubisoft and before he got there, he dropped one containing things about optimizations. Like this feels so unoptimized, I am not even surpirsed it will be 30FPS on next gen consoles. Maybe when RTX6080 comes, we finally will have high refresh solution for Ubisoft open world games. :-D

But yeah, that is what happens when you put ease of marketing ahead of player experience. Nicer graphics were always easier to market than experience or smoothness of higher FPS. And you can clearly see which Ubisoft chose.

Not surprising at all. People are quick to forget...

Huh, I forgot about that being a thing back then. But yeah, Ubisoft never really changes, just occasionally when people stop buying their stuff, then suddenly everything can be fixed for a game or two, till they go back to competing with EA for the worst company reward.

Difference between optimization and demanding. People really need to stop making that mistake. Unoptimized is a game that dips fps all the time, including horrid frametimes and lag. This game like every other AC game is DEMANDING not unoptimized.

FINALLY someone gets it, its also heavily tied to its game engine regarding optimization/demand.

How can it be so much more demanding than Odyssey when the graphics are pretty much the same?

Bro what exactly have they improved visually compared to Odyssey? It doesn't even have RT and yet 1080 for 60 fps? pfft.

We will see that once the game is out.

I don't see the problem here. A gtx 1080 is a mid-range card by today's standards.

Also i wonder if processors without avx(or avx2) instruction set will be able to run this because if i remember correctly ac origins needed separate patch after launch.

"multi monitor and widescreen support" huh interesting, i get that with widescreen which is great for those users but multimonitor? i might try it out once i get it for s#its and giggles, multi monitor support is very important for racing games but not really for story single player games. Honestly like xquatrox said its pleasant surprise with such detailed requirements and support.

so what should I expect? thx

Doesn't make much sense. I think they have their 4k messed up.

1440p probably includes using anti-aliasing such as MSAA that uses more GPU resources and wouldn't be necessary at 4k.

True but also says ultra high so im assuming that's shadows and god rays all maxed out. We know how demanding those can be in AC games.

These AC games only use temporal aa, or at least that's the only options in Origins and Odyssey.

I'll give credit where credit is due - at long last someone is starting to state the resolution, settings and fps target in the system requirements! That is great to see instead of "minimum" and "recommended", which almost never used to come with any meaningful targets/metrics.

Yep, we need more games to do this, the game seems demanding af, and definately a 3090 needed for that 4k 60fps

but if programmers do that, then people will scream about being unoptimized and how the requirements are too high (dirt 5).
we cant have progress if we treat 3 (!!!!!) generations old gpus as if they just came out.

Nice, can run it on high, well im ultrawide so probably not. Will tweak it and probably get 60fps no problem. i don't think it's as demanding as Origins or Odyssey bu we shall see.